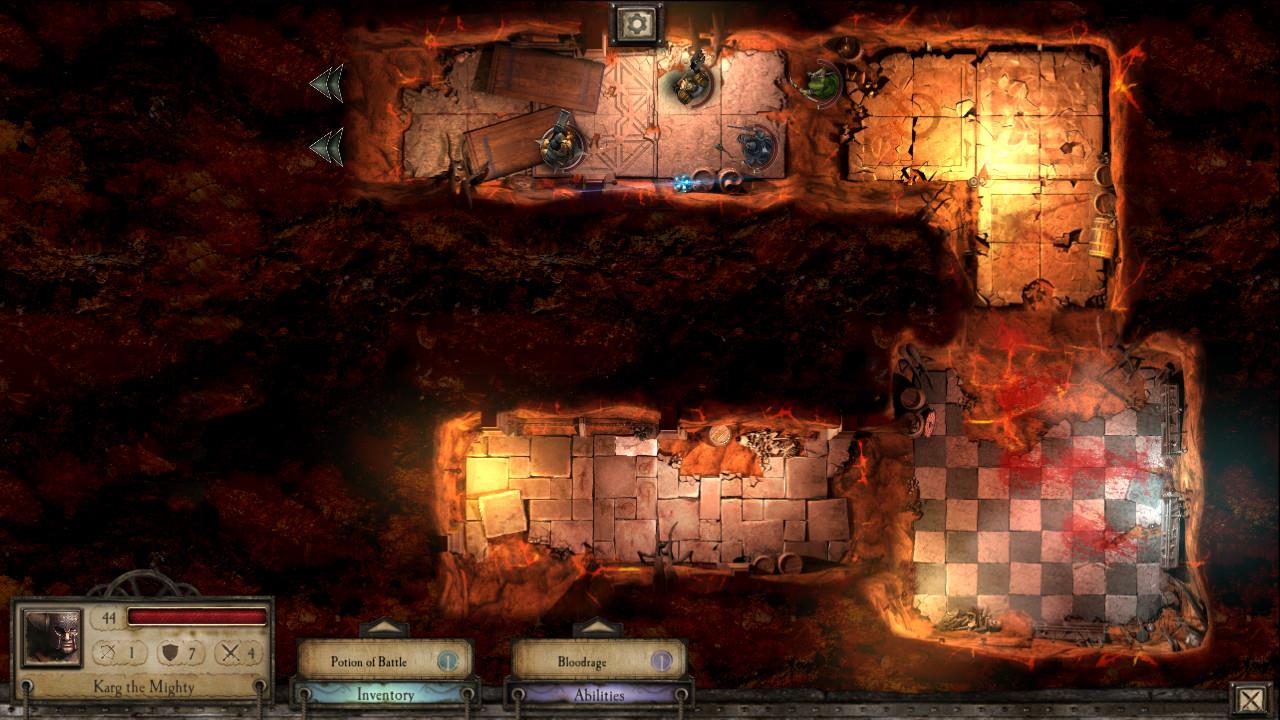 Full disclosure: I've never played Warhammer. I've never even stepped inside a Games Workshop, despite admiring the Warhammer figures and artwork through the shop window on two continents. However, I have to imagine the best things about playing Warhammer is the interaction with your peers as you stage a grand battle in a clash of armies across an expansive battlefield and letting your artistic flag fly in customizing your armies. You won't find that in Warhammer Quest. It's a strictly single-player dungeon crawl with a party of pre-set characters battling it out against waves of enemies trapped in narrow corridors. The lore is lifted from the Warhammer fantasy universe, but the game seems to play out very differently. While, that's not necessarily a bad thing, this is probably not the Warhammer game a diehard fan would be looking for.

So what is it? It's actually an enjoyable little time waster. The earlier dungeons that I played through can be completed in reasonable time limits, 10-15 minutes max. You basically bounce back and forth between dungeons and towns, collecting loot and then selling it off/restocking your party. Visiting a town opens a nice little Game of Thrones-esque title opening that actually seems out of place, because everything else is text. Each dungeon is surrounded by a narrative presented purely in the form of windows of text thrown at you. While there is some consistency to the narrative in each town, each quest seems fairly disjointed, which makes it easy to pick up a quick quest and put the game down again. But ultimately, there is little to really immerse you in the story anyway. Want to know about you next quest? Text. Time to wrap up that dungeon, what do we have? A text-planation of who you just saved and what the response back in town was. Want to learn about your characters, or enemies, or anything else? Well, open your journal and put on your reading glasses, there is a novel's worth of text to explain it all. Well, to explain a lot of it anyway. Because you are constantly going to be surprised at the fun little abilities everyone seems to have that despite all that text never get listed out in a way that is easy to digest. Spiders can use their be ability to pin you and prevent you from attacking, and it's hidden there in the text, but there is no easy reference to the special abilities of each class of character. Same for heroes. All of the sudden your wounds will heal or you'll get a stat boost or go into a berserker rage, all sorts of fun little bonus you had no idea existed. Eventually you'll figure it out, and maybe it's hidden in the text, but it sure isn't spelled out clearly or listed plainly despite all those words. So many words. 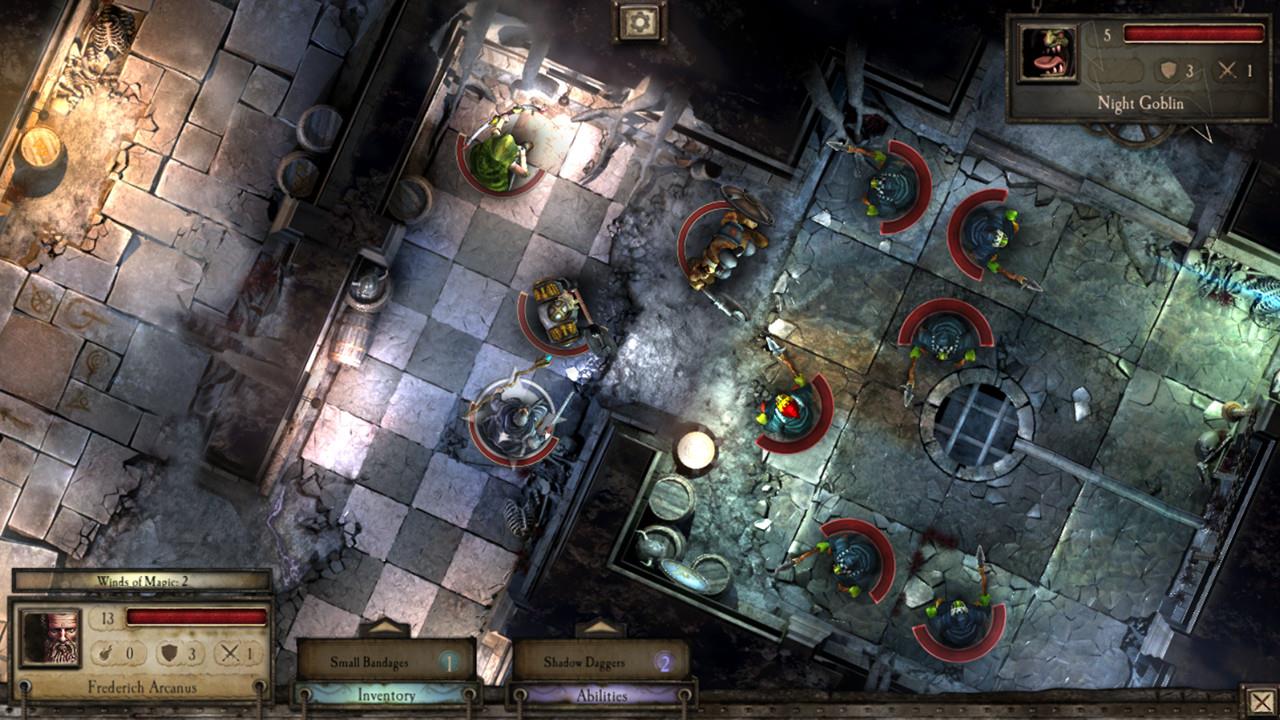 So while it's a fun time waster, there isn't really anything that's going to pull you in and immerse you in the world of Warhammer. The music is excellent, but the story plays out like a master’s thesis and the visuals are thoroughly meh due to the choice of a bland, top-down view. It’s a far cry from the artistic expression and visual engagement that I would expect from a Warhammer title. Also, it is important to go into the game with a thorough understanding that this is a board game port, because dice rolls are often not your friend. The best-laid tactics can all go to pot when your damage is controlled by random chance and you roll three misses in a row with your big dwarf's two-handed axe. Some modern gamers or those unfamiliar with old school RPGs might find this infuriating. We can get a lower level hero is going to have trouble against higher level enemy, but to take a swing at a dungeon rat and whiff, or to have damage levied routinely swing a full 50% higher or lower from strike to strike is somewhat uncommon these days. 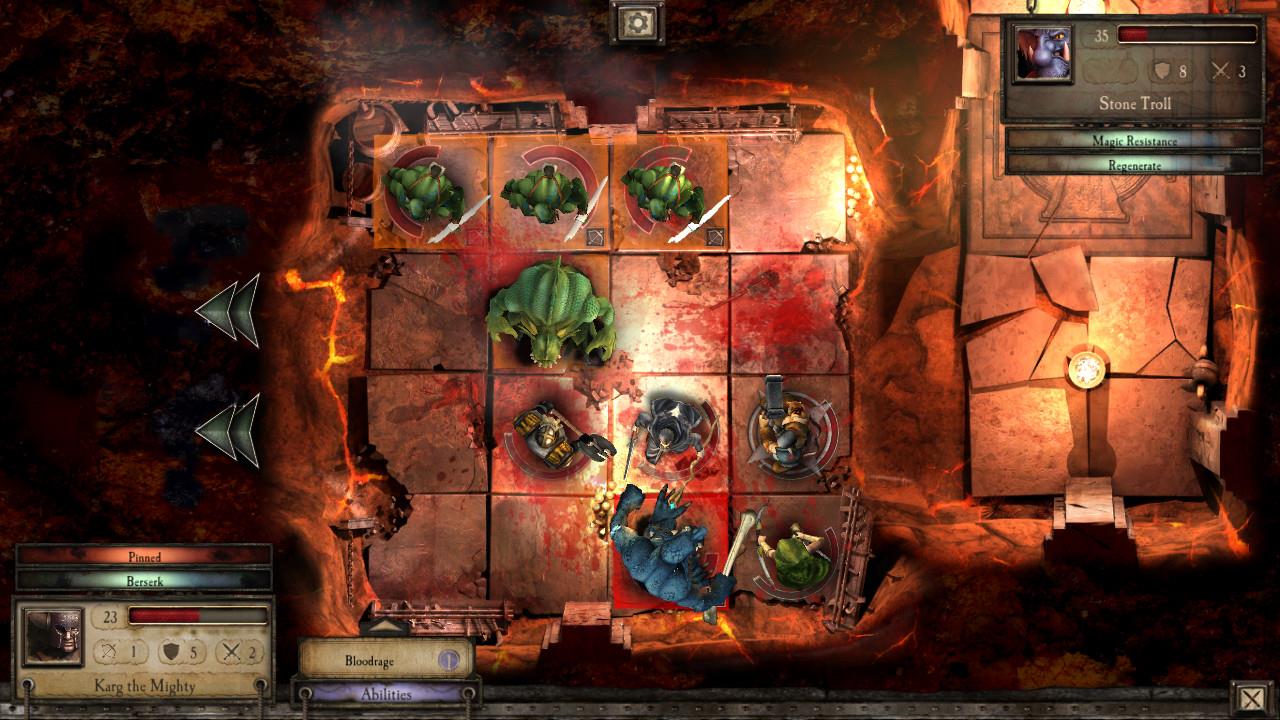 This is not a bad game, but it's just out of place. It was created to be played for iOS devices and ported to the PC and feels like it. The pacing, the single player limitation, the micro transactions, it all makes for a very pleasant experience on the iPad, but it just misses the mark as a full priced PC game. Except for the micro transactions, those suck on both devices. I understand it on a free game, devs gotta eat, but the game is priced at the top price point for the genre across devices ($4.99 on the App Store and $14.99 on Steam) and still want to hit you up for more money in-game. It's a bit much. There is an option to unlock all in-game transactions with the Delux version, but that's going to set you back $29.99 for what is essentially an iPad game on the big screen.

Ultimately, Warhammer Quest is an enjoyable experience, a fun little time waster that delivers slices of dungeon action at an easily digestible pace. But it does so at a price point for content it just doesn't justify. It feels like a game that was meant to be played a few minutes at a time on a tablet while sitting on the throne of your own household, and that's what it is, an iOS port to the PC. If you want to try the game, get it for the iPad and have a fun time. There is just no reason to buy this for PC unless it is on a massive Steam sale discount.