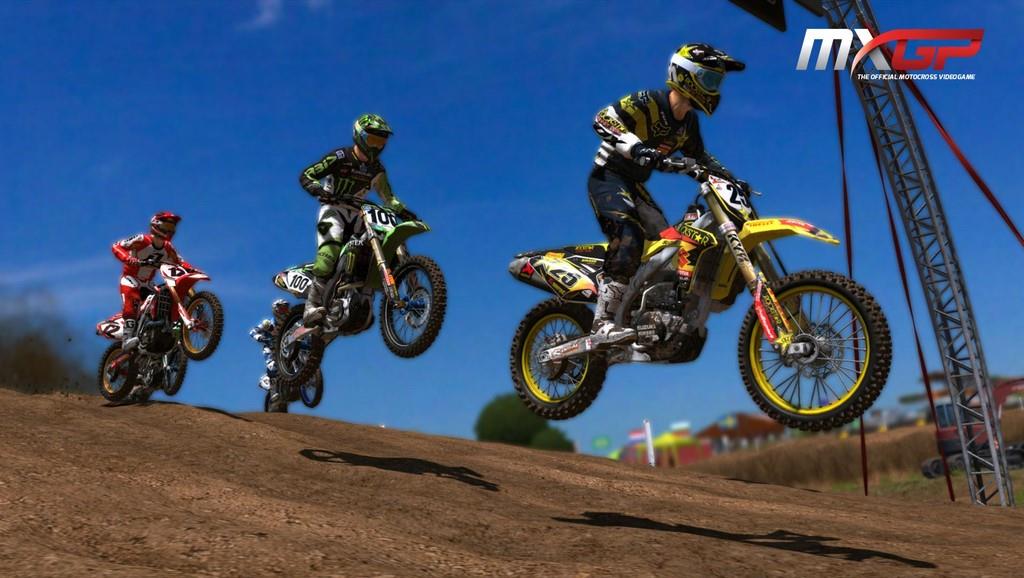 Written by Cyril Lachel on 12/16/2014 for PS4
More On: MXGP - The Official Motocross Videogame

Going into MXGP: The Official Motocross Videogame for the first time, I had an idea what I was getting myself into.  I've seen motocross championships on television and am generally a fan of off-road racing, regardless of the amount of wheels. But I quickly discovered that this PlayStation 4 racer was familiar for a completely different reason. Despite having a different license attached, MXGP is a carbon copy of the recently-released MotoGP 14.

With the same modes and career progression, this motocross simulator feels nearly identical to its road racing counterpart. In some ways this is a good thing, as MotoGP 14 delivered a robust experience full of compelling modes and a strong line-up of real-world tracks. MXGP manages to hit many of the same notes, but somehow isn't as much fun. In a twist I didn't see coming, this is a racing game that is held back by its big name license.

As an off-road racing game, MXGP is a lot of fun. Much like MotoGP 14, the controls takes a little getting used to. My instinct was to treat it like an arcade racing game, but it didn't take long for me to learn that this leads to a series of painful crashes. It was through practice and fine tuning my bike that I eventually got a handle of the mechanics and started coming in first every time. But getting to that point takes persistence, and I can see how the steep learning curve will turn off some players.

In the career mode, players work their way up the ranks by traveling around the world and going up against the biggest names in the sport. With a few races under the belt, the user-created character will join a team and work their way through both MX1 and MX2 classes. Along the way, players will have the opportunity to sign new contracts to and take their game to the next level.

The tour calendar sends our race team to some of the most exotic locations in the world, each with their own video package introducing the culture. Our career takes us to Italy, Bulgaria, Portugal, Brazil, France, Sweden, The Netherlands and seven other countries from the official MX1 and MX2 2013 FIM Motocross World Championship. 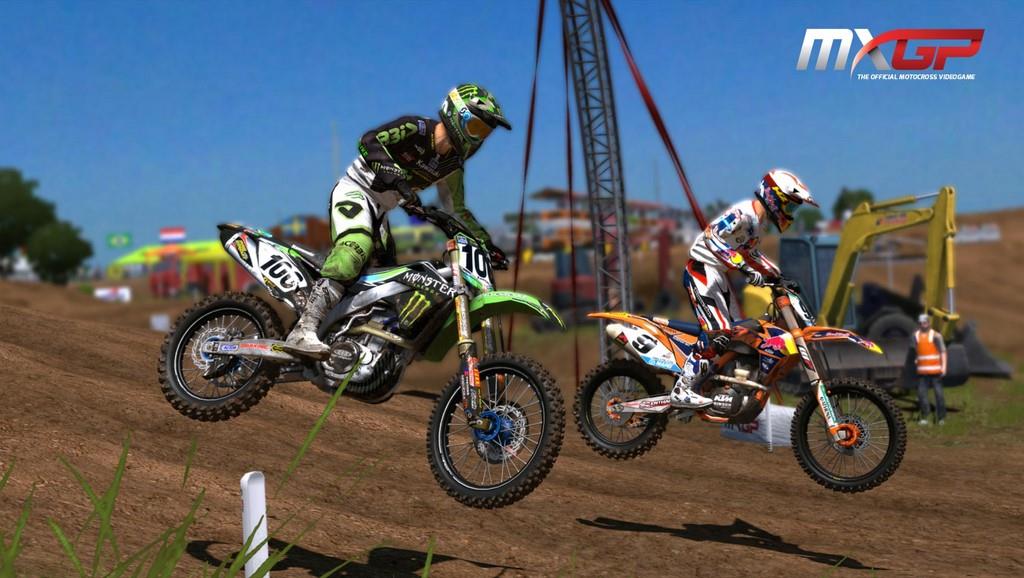 Much of this will be immediately familiar to anybody who played MotoGP 14. The career progression, team negotiations and even the full-motion introductions all feel like they were pulled out of Bandai Namco's other PlayStation 4 racing game. But when the tires hit the dirt, MXGP begins to set itself apart from the other motorcycle games on the market.

I was surprised to discover how involved a typical motocross championship was. A normal race weekend includes a time to get used to the track, a qualifying lap and not one, but two identical races. While you can cut out the practice run and qualifying lap, there's no getting around the two races. For what it's worth, each event can be set between three and twenty laps, with the latter taking a ridiculous amount of time.

But the thing is, even when you cut out the filler and only race three laps, each event takes around ten minutes. That means you're stuck in one location for at least twenty minutes, which blunts any momentum the game started out with. Normally I can't get enough of this kind of game, but I found progressing through the career to be a slog. 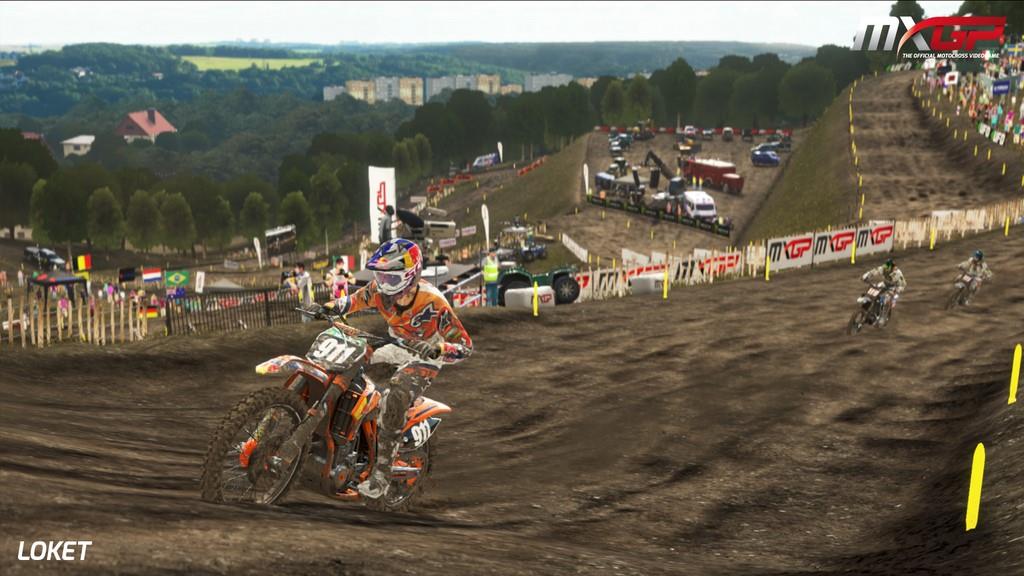 The truth is, this impediment was likely unavoidable. Assuming this is the way it works in the real world sport, I'm sure the die-hard fans want the experience to be as authentic as possible. For me, I found racing the same track multiple times in a row to be exhausting, and it's a shame there isn't an option to reduce it down to a single run.

It doesn't help that many of the locations look the same. Some backdrops are so sparse that you'll hardly know they're there. At best, the game will change the color of the dirt or add a mountain, but too many of the stages feel disconnected from the real location. If it wasn't for the video package before even race, I would have a hard time guessing where I was. This is a problem that also plagued MotoGP 14, but at least I found the real world track designs to be more fun to race.

Outside of the career mode, players will find the usual assortment of bonus modes. Players can jump into an instant race, try their luck at the time attack and take control of real MX athletes in the grand prix mode. This PlayStation 4 game also includes a number of competitive multiplayer options, including an online season mode where racers earn experience. I was impressed with the individual options, but had a hard time connecting with other players online. 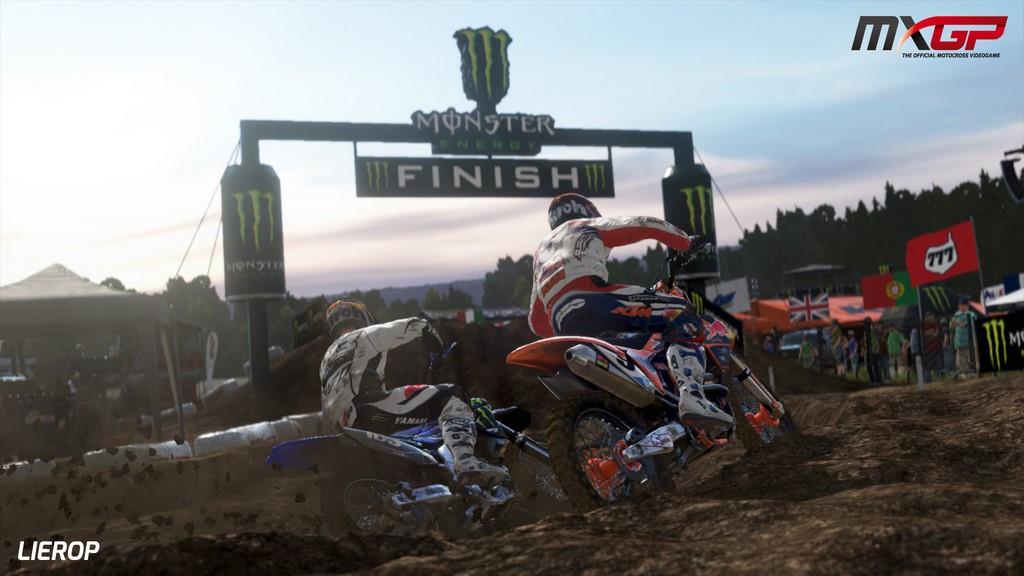 Fans of the sport will likely enjoy seeing the large roster of real athletes and licensed bikes. There are 60 different riders to choose from and another 60 bikes, as well as a robust tuning system. It's a shame these different elements weren't better implemented into the career mode, because MXGP has real untapped potential.

Despite acting an awful lot like MotoGP 14, MXGP: The Official Motocross Videogame is different enough to set itself apart. The off-road tracks are a lot of fun, but any momentum the game has grinds to a halt thanks to some questionable design decisions. While fans may get a kick out of seeing the 60 officially licensed riders, that wasn't enough to keep me engaged in this disappointing racing game.

After the success of MotoGP 14, MXGP: The Official Motocross Videogame left me cold. While the racing mechanics are fine, the boring progression is made worse by a number of questionable design decisions. Worse yet, none of the real world tracks stand out and the graphics aren't very good for a PlayStation 4 game. MXGP is a big disappointment.