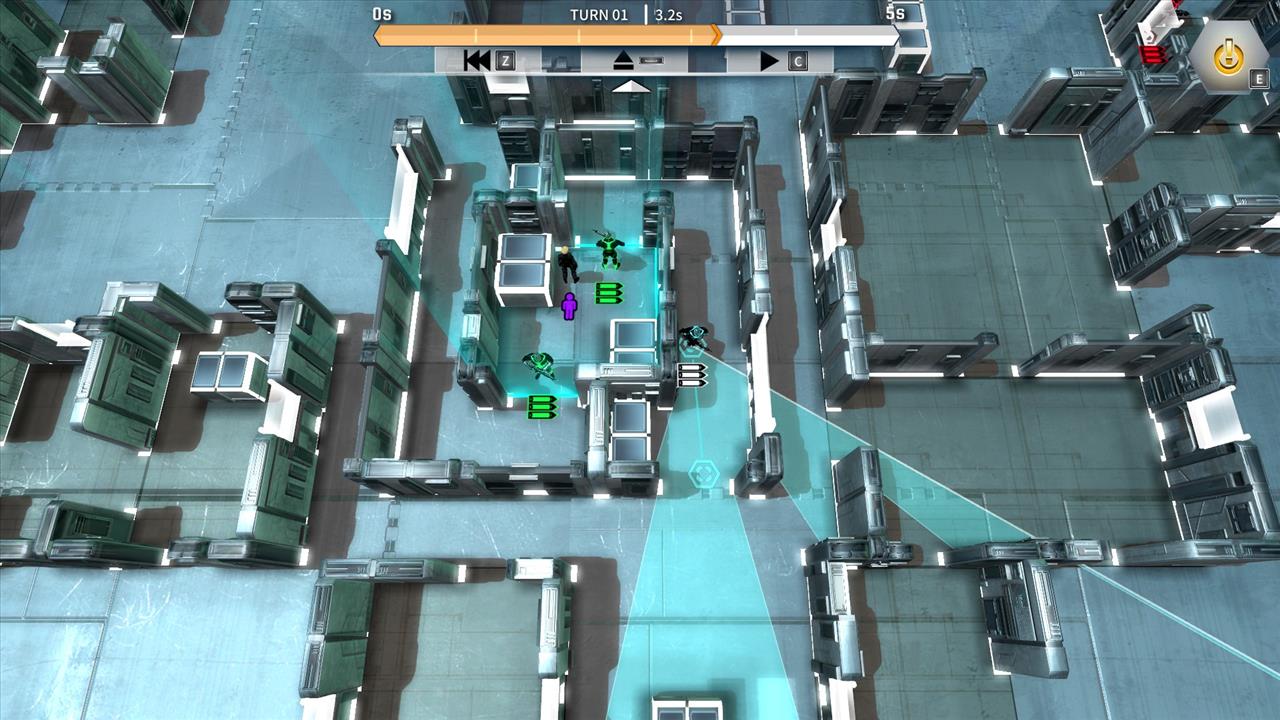 In one sentence: Frozen Synapse Prime is what you get when you take a turn based strategy game and cover personality-less combatants in Crysis Nanosuits, have them run around the Sarif Industries building from Deus Ex (with the musical score to match), going floor by floor searching for the Architect from the Matrix. The original Frozen Synapse was created by Mode 7 and released in 2011. Frozen Synapse Prime is the follow up to the original Frozen Synapse, released in 2011. While the first was created by Mode 7, this sequel was done by Double Eleven, the same developer who took over a number of the later PixelJunk titles, brought LittleBigPlanet to the PS Vita, and are currently working on porting Goat Simulator to Xbox One and Xbox 360. Frozen Synapse Prime was released earlier this month for PS3, PS Vita, and PC via Steam. It offers both a single player campaign and multiplayer PvP in one-off matches and the Arena. This review focuses exclusively on the PC version.

That trailer does a good job of showing off the graphics and the use of the Havoc engine to create its 3D world and offers a taste of the excellent musical score that accompanies the gameplay. What it doesn't show is some of the tedium of the minutes that go into managing commands for your squad to pull off a single 5 second turn. But to be fair, most of the interactions of inputting commands don't really feel all that tedious. The wheel of available actions at your disposal for each unit is robust enough to give the game depth but not so convoluted that you must get lost in the micro-managing of each step.  The control scheme is excellently set up, both for gamepads and mouse and keyboard, and with clever use of the both the right-click and center-click, or scroll wheel-click I found it most comfortable to zip through issuing commands with the mouse alone.

Tactics is the name of the game
And it is certainly the name of your character in the campaign, a man you will feel little real connection to and likely soon forget. There is a plot in the game, but after the first few rounds I stopped paying attention and opted for the "Skip" button instead. If you can't get enough of reading walls of text, if the Transceiver from the old school Metal Gears is class-A entertainment for you, then you'll be immersed in the futuristic techno-babble of the plot. But there is no voice acting, no cut scenes, nothing to really draw you into the story except en endless stream of little headshot avatars pasted alongside more text. Then another avatar will chime in with some more text, and viola, you have a conversation.

Thankfully, this isn't a game that is story driven. The campaign really only serves as an extended tutorial to get comfortable with the different units while getting chance to have a go at missions with objectives other than kill all of the little red guys with your little blue guys. Many campaign missions center around escorting a non-combatant to safety/hack a terminal/plant a bomb. Or grabbing security keys and protecting the unit holding those keys. 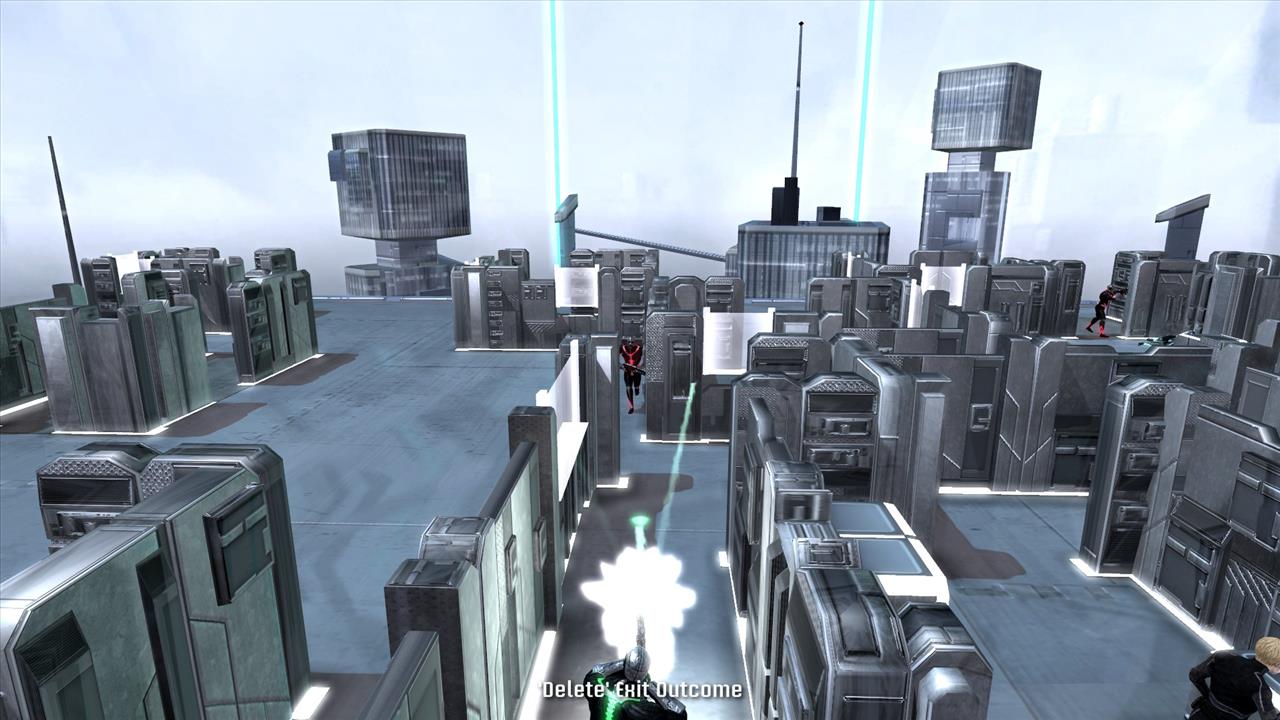 As for the gameplay, the tactics of the battle really focus on 3 areas: troop movement, the Rochambeau of the weapons of each unit, and the delicacies of all parties taking turns simultaneously. Troop movement is vital, but not just in the paths of the troops, but also in keeping their field of vision focused on likely enemy areas. A big part of winning duel in this matchup is who is set and ready to fire first and the controls for movement and sweeping go a long way towards this end. But even more unimportant is having the right character in the right situation. It's rock-paper-scissors, but with shotguns, grenades, and snipers. No one is going to put down a shotgunner turning corner except for another shotgun, just check out that release video above at the 1:55 mark to see what I mean. The shotgunner puts down 3 machine gunners before they can get off a shot. But just outside of his range, or crossing an open field, the machine gunner will win that duel every time. Same with a sniper, who can pick off a machine gun with one shot, one kill while his opponent sprays rounds wide at the edge of his range.

Finally, we also have the beautiful madness of simultaneous turns. Many turn based strategy games let one player execute instructions for their entire squad, before switching control over to their opponent to counter uninterrupted for the duration of their turn. While this presents some strategies of its own, namely overextending a squad to deliver a killing blow that would decimate the exposed units on the counter if the enemy is not finished off in the initial parry; it never provides a moving target. In Frozen Synapse Prime, you're always hunting a moving target. Because just as you might have to decide which door to charge a room, the enemy is making a similar choice as to which to fix their crosshairs.  There are plenty of times you'll have a coin flips chance of targeting a camping enemy through a window or down a hallway. Choose wrong and the stationary baddie has the drop on you, choose correctly and you could get the kill before they even turn to aim.

There is beauty in the ambiance
I've heard the criticism that this game isn't much more than the original with a new skin. I've not played the first so I can't comment on that, but even if it were true, it's a pretty darn nice skin. I've seen gameplay of the original, and when my eyes stopped bleeding, I appreciated Prime even more. It wasn't just the originals day-glo character visuals against the backdrop of drabs purple maps, but the menu interface was 10 year old UI ported into the 21st century. Where Frozen Synapse Prime excels is in setting the scene. The controls and UI are robust and easy to navigate. While the combatants are pretty nondescript in their Nanosuits and bit stiff, and the levels are pretty sterile, it is leap forward from the visuals of the original. Double Eleven even incorporated the Havok engine to power the visuals, and the music is perfect. The soundtrack would fit right in with a game like Deus Ex and it really sets the mood.

There is also this wonderful preview feature that lets you track your next turn before committing to it.  While it doesn't act like an oracle to betray the troop movement of your opponent, it is a nice safety to make sure you have your visual sweeps dialed in before you turn that corner, pass that window, move through that doorway. 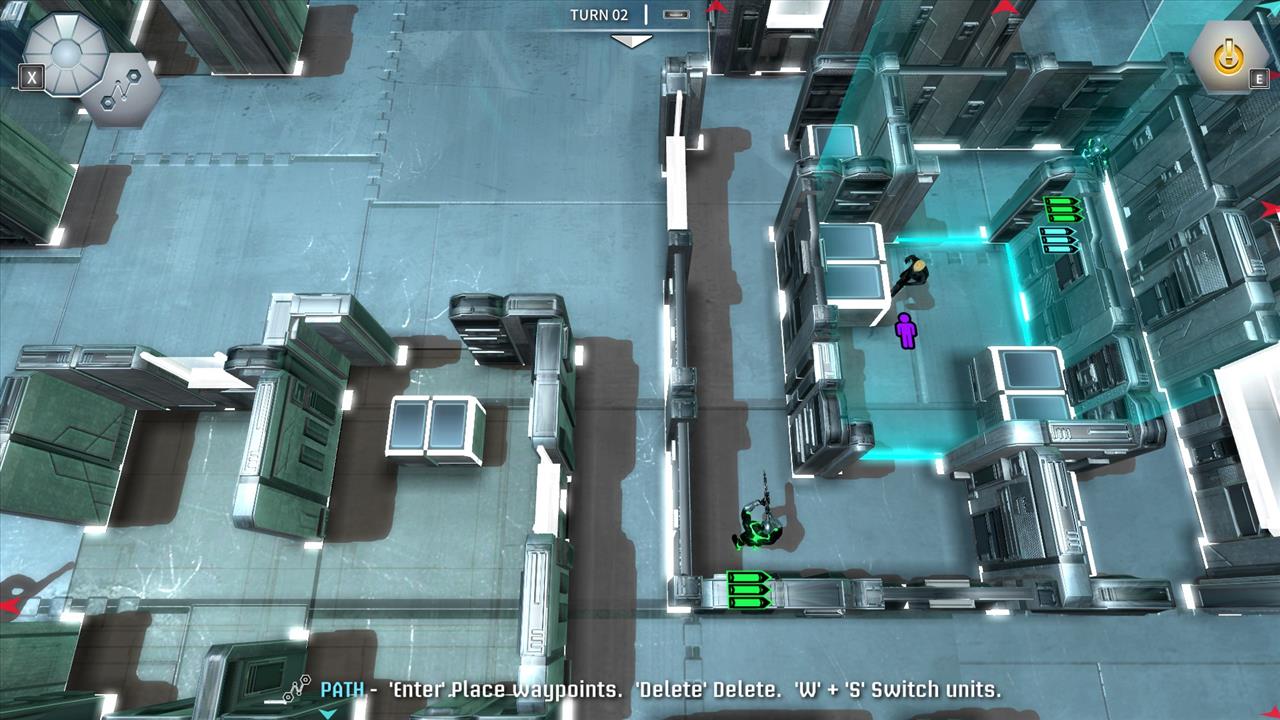 Missing the target
There are a few areas where I feel this game really missed the mark. I've mentioned how the text based story delivery fails to to create any immersion in the plot. But there is also no real progression in the combatants. Lose a bunch of guys this round, and there is no carry over penalty to the next, you just lose a gold star from your ranking for that round. Units are what they are, they don't get better, don't build up, and are utterly expendable. Scraping by a mission with a single survivor is the same as dominating the field, the next round is a clean slate. There is also some inconsistency in the player's overview of the battlefield. You start with an omniscient view of the enemy, and only sometimes when you lose a duel might you also lose sight of the enemy that won that duel. It serves as a bit of a penalty, but why can I see all the other enemy unit all the way across the map and behind three walls? Either give me line of sight ability to recognize threats or give me the whole battlefield.

My primary complaint is that there is no real cover system. Like the screen shot above, I guess that's one way to cover a hallway. But take one big pace to the right and just peek around that long corridor and you'll not only take down any advancing enemies, but even live to see the sun rise tomorrow. In order to fire a round yourself, you basically have to position yourself in the full line of fire of your target. Let's all put on out redcoats and march across this here field. While you can fire before you see the whites of their eyes, you can't really fortify a position and execute flanking maneuvers. Perhaps this is by intent, in that by exposing all players the battles won't get bogged down into battles of attrition, but it seems like a missed opportunity for a strategy game.

I think Frozen Tactics Prime is a solid game. It has great controls, good enough visuals, excellent music, a number of play modes, and even the ability to review other PvP matches. If the PS Vita can recreate the experience of the PC, then I would highly recommend it. On PS3 I think I would have rated it a bit higher as well given it stands out among the gaming catalogue for that system. But on PC, turn based tactical strategy games is a much more crowded field, and amongst that variety, Frozen Tactics Prime is good but not great.