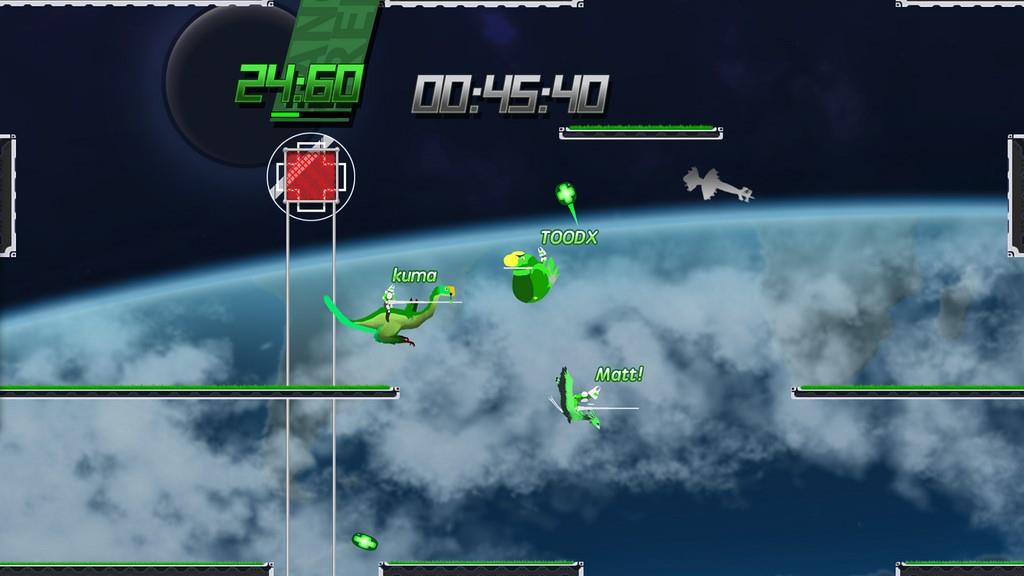 What do you get when you cross soccer with the classic arcade game Joust?  Well actually you get something similar to polo and that wasn’t really what I was trying to go for here, but you basically get a bunch of birds flapping around in the air trying to knock a ball into a goal while trying to tackle their opponents.  That’s essentially the premise behind Sportsball.  Honestly when I first heard the title it sounded kind of generic and I had no idea what to expect.  After checking it out for a bit, it’s anything but generic…then again, what really is generic when it comes to sports today?  Either way, let’s check it out.

Sportsball can be played with one to four players.  Each player chooses from one of four teams, then from one of four birds from that team.  After that you choose which arena to play in with each arena having a different layout.  While the game is for one to four players, your options are severely limited if going solo as you can only choose Rallyball Basic, which is basically a survivor mode where the goal is to score points within a small time limit with each goal adding a few more seconds to the clock.  Sadly this is all you can do by yourself as there are no CPU opponents and you literally can’t pick any other game mode; it just keeps rotating to Rallyball Basic on the mode selection screen.  It’s worth noting that you can also choose Rallyball Basic regardless of how many players you have, but it’s also the only choice if all players choose the same team.

If you have one to three friends to join you locally, a few more options become available.  There are a few different ways to play, such as Sportsball which is about getting balls into the goal to score points, and Sportsbrawl which is all about tackling your opponent with your lance to score points, similar to Joust.  With Sportsball, every time you tackle your opponent with your lance a set number of balls will spawn from it, giving you more opportunities to score points.  There are a couple of other match types such as Explosive Chaos which is a Sportsball game with five balls spawning per tackle and a max of twenty balls on screen, and Duel, which is a simple first to five Sportsball mode.

If you’re not fond of the pre-set match types you can always create your own custom matches.  Options include things such as the game mode, respawn time, number of balls that spawn after a tackle, and more.  There are a lot of options to choose from and you can make just about any game you wish.  Want the ultimate in chaos?  How about a sixty minute game with instant respawns, twenty balls max on screen, no invincibility from respawning, and five balls per tackle?  That would be pure chaotic fun, especially with four players.

In terms of how the game controls, it doesn’t feel too bad.  Again going back to Joust, if you’ve played that you should get a quick grasp on how the controls feel and the speed of the birds.  Granted each bird plays a bit differently and has different stats, but it won’t take long to get a good feel for it.  What might take some time though is getting the timing down for hitting the ball where you want it to go for the Sportsball modes.  You can not only flap your bird’s wings but also dive into the ground to either hit your opponent or the ball, with the ball bouncing into the air depending on how fast you were going down towards it.

That being said I’m glad there’s a way to do single player at all, even if it is just one mode, because you’re going to want to practice a lot before going into any serious matches.  I’ve played several practice rounds just trying to get a feel for how to move and hit the ball where I want it, and yet my best score for survival mode is only about four or five goals.  Keep in mind that you only have thirty seconds per match and you gain a few extra seconds for each goal you score, so obviously the better you do the more time you have to practice, but it still goes by quick.  A simple non-timed practice mode would have been more sufficient here.

Even though Sportsball is a multiplayer game for the most part, you can kind of get a decent single player experience if setup properly.  If you have multiple Wii Remotes you can still set up four players, but only control one.  Once a bird is tackled and respawns, it will begin to just run to the left non-stop if you don’t touch the controller.  While it may still be a bit easy to tackle that particular “player”, they can still bounce any balls they touch into the air and they may bounce into the goal.  As long as you set the options to spawn a lot of balls after a tackle and set a high max amount of balls on the screen, it could get a bit challenging, but still not as fun without CPU opponents. 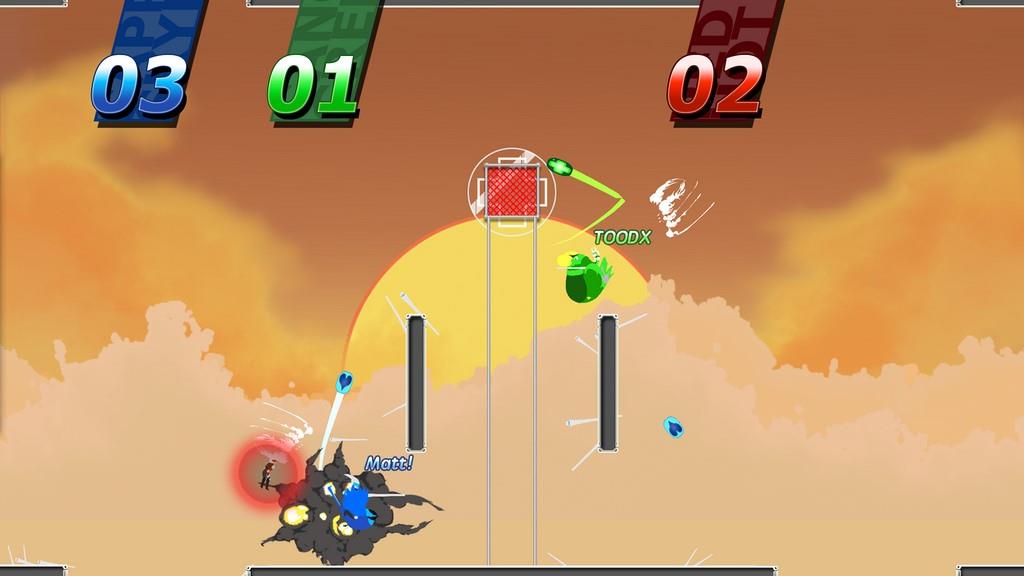 That’s really all there is to Sportsball.  It’s essentially a multiplayer game with a single-player practice mode thrown in.  The multiplayer can be fun, especially with the multitude of options you can set, but my main complaints all stem from the lack of single-player options.  Again, even a simple practice mode without a time limit would have been nice to just practice hitting the ball at different angles in the various stages for longer than thirty seconds.  Better still, implement some AI into the game.  It's also worth noting that there is no option to play online, so it's local multiplayer only.

If you’re having some friends over and are looking for a good multiplayer game to play, Sportsball is definitely worth picking up.  Whether you’re looking for a hard-hitting game wirh only one ball at a time or something more chaotic where the balls fill up the arena, Sportsball will definitely keep you busy.  If you’re by yourself or don’t have friends over that often (or like me, typically at all), then ten dollars might be a bit much to plop down for essentially a thirty second practice mode.  A fun game, but not for one person playing alone.

Sportsball is a fun and fast paced game…when played with friends.  Sadly there’s very little single-player content to be worth the ten dollars if you rarely have other people to play with, and there's also no online play at all, but beyond that Sportsball can make for a fun afternoon of soccer with a bit of Joust thrown in.