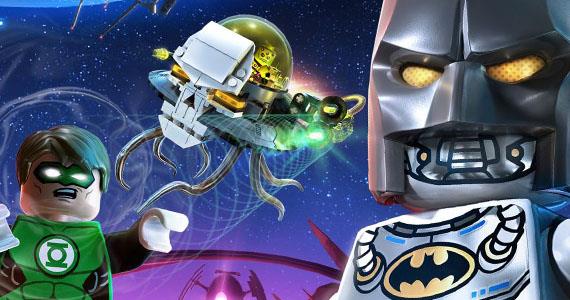 The third entry into the Lego Batman franchise, Lego Batman 3: Beyond Gotham, is a well structured title, with a good base to build off of with the two previous titles having done very well. For the first time on next gen consoles the franchise gets better graphics and more system power to deliver a fantastic experience to the players, but seem to fall short with keeping the game fresh for those of us who have played the first two entries. With some new characters coming to the series, and a couple additions to make the gameplay more manageable, WB Games and TT Games have released if nothing else, a quality level we have come to expect.

Beyond Gotham's story is one of my favorite parts of the game, as they picked a great arch to bring in tons of extra characters with reason, rather than just throwing them at you. The focus on the Justice League and Lantern Corps has been something I have rather enjoyed. As mentioned both the Justice League and Lanterns are up against a common enemy in Brainiac. Brainiac, most notably a villain from the Superman universe, is attempting to catch one of each color power ring of Lanterns to harness their power to shrink entire planets instead of just cities as all DC fans are aware. But, before the League can join the fight, they must first deal with and then join forces with a typical group of villains. Joker, Lex Luthor, Solomon Grundy and others are up to their own schemes until everyone sees Brainiac's plan and teams up to stop him. Using these and the massive plethora of characters you unlock and gain access to along the way, gives you all the tools you need to stop the devious villain from adding Earth and other planets to his shrunken collection.

One of the new additions to the gameplay is the inclusion of “Giant” Lego characters. Solomon Grundy and Killer Croc are two of the earlier giants you gain access to, while Cyborg and Lex Luthor both have their own gadget suits to make them giant. This dramatically eased the “destroy everything on the level” game play the Lego series provides as the area effect attacks of the giants made your path of destruction unfold much faster. The other way the developers have eased some playing woes on the players is the introduction of the new Gadget Wheel. The Gadget Wheel is a quick way to pick just the gadget suit you need, while being able to look and see all of the suits a given character can dawn. Suit selection was quick and smooth, but if you prefer the traditional button press until you get the suit you want technique no fear, as that hasn't gone anywhere.

The character selection is incredibly plentiful with 150 unique characters. The range is wild with your typical A listers, such as the obvious Batman and Robin and the rest of the Justice League, to characters exclusive to certain series and the more obscure. My favorite non standard character I came across was definitely the Blackest Night Batman, from the Green Lantern series of the same name. The little known characters were interesting to see, but I had no real desire or need to use any. This was expected with the sheer size of the list in comparison to the size of the game, which makes the option nice to have, but without enough time or reason a lot of the characters get lost in the mix. Unlockable characters were also in great number, again from A list characters all the way to Z, but overall had a good set of ways they used to unlock them. For those that take the time to unlock and achieve the full character list could feel as though they have achieved much more than just beating the game, which of course is a desired effect for the seasoned gamers.

The graphics and sound of the game are as expected with the title. Familiar voices from the previous entries are the expected staples, while the addition of some cameos and crowd favorite actors make their appearances vocally as well. Conan O'Brien handles the role of the janitor of the watch tower which was an amusing addition. His character gives you tips within Watch Tower in between levels on how to utilize everything it has to offer, including the new trophy room that has an area to view multiple achievements in the game. Another famous voice that offered their talents to the game was Stephen Amell, the Arrow himself, from the popular series on the CW taking on yet another Green Arrow role in the DC universe along side Injustice: Gods Among Us. And last but not least in the voice arena is Silent Bob, writer, director, and avid comic fan Kevin Smith. He had the oppurtunity to voice himself as well, but overall the voice cast is very well chosen and has some other stars that I'll leave up to you to figure out. The graphics of the game were not as well taken advantage of in my opinion. The overall look for the game is easily handled by the next gen hardware but under utilized. The under utilization comes from the constant screen breaks from area to area, where I felt they could have expanded the size of the levels at least a bit to give the settings a bigger feel. But despite that downside , what is on the screen looks great when compared to Lego's first entry in to next gen, Marvel Super Heroes.

Overall, Lego Batman 3: Beyond Gotham, hits on all notes a fan of the Lego and DC Comics universes would expect. Solid voice acting and story, along with the immensely large selection of characters, keep the game a float as great addition the the Lego Batman franchise. However the few new additions to the game play are the only thing other than setting that takes this apart from its predecessor. This game would be a good addition to a fans collection, but the Lego games overall are becoming titles lost in the mix of mediocrity.

I’m one of the newest writers here at Gaming Nexus.  I’m a Columbus, OH native who has had a lifelong passion for gaming and technology.  I very into European Futbol(Soccer) as I am gaming and tech and follow Chelsea FC out of London.  Currently I’m in IT Systems Support by day, and game as much as time allows in my nights. View Profile