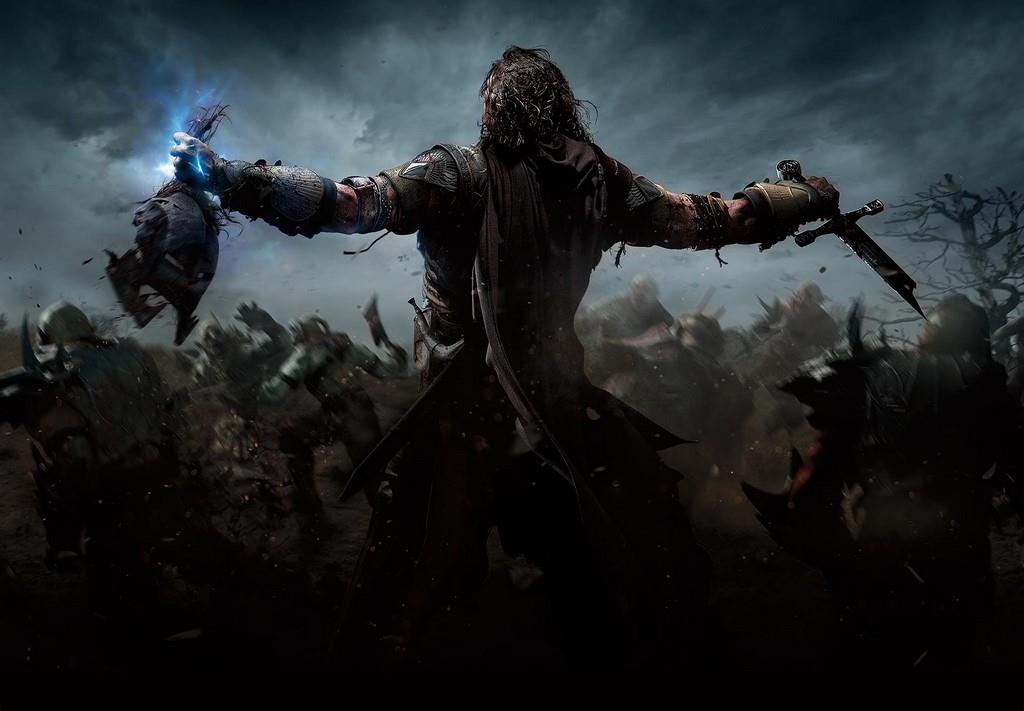 It is usually a scary thing when a developer brings out a licensed video game. I don’t know what it is, but for some reason a lot of these titles usually fall flat on their face. It’s really sad that this happens because titles like this have all of the opportunity in the world set in place for their success with most of the legwork done ahead of time. They already have an established brand name and the public is already familiar with the characters and worlds ahead of time. You don’t have to worry about laying this groundwork, just focusing on the gameplay experience itself. Walking into Middle-earth: Shadow of Mordor, I was admittedly hesitant because of my past experiences. What I found however was an incredibly pleasant surprise and one of the most memorable games of 2014.

One of the smartest decisions that Monolith made in developing Shadow of Mordor was to construct a side story in Tolkien’s universe rather than tackling the main tale. This gives them a bit of freedom and also relieves some of the pressure of meeting specific expectations of fans. Set between the Hobbit and the first installment of the Lord of the Rings, the game introduces you to Talion, a ranger who is sacrificed, along with his family, by the Black Hand of Sauron. The sacrifice is an attempt to resurrect the Elf Lord Celebrimbor. However, things don’t go exactly as the Black Hand plans and the Elf Lord returns within Talion’s dying body, hell bent on revenge. Talion is now an immortal being sharing his body with a wraith determined to avenge his own death, and the two seek out both the truth behind their demises and to take down the evil that brought them together.

While it is an original story, the game takes you across a variety of familiar territory and brings in a couple of familiar faces. Gollum, in particular, is prevalent throughout your adventure and true to the form we have become familiar with throughout the film series (and books). However, the tale told here isn’t anywhere near as deep and memorable as Tolkien’s original tales. There is little done to really connect with any characters outside of the Talion and the Wraith, even though it would have been beneficial to know a little more about their relationships in and around Mordor. The ties between Talion and the rangers in particular could have been explored much more. It plays well within the shadows of the original lore (get it?) and it serves its purpose and keeps you tied to the action, but this won’t be one that you will be retelling to your friends and discussing in depth.

The gameplay on the other hand is completely worth discussing with people, because it is fantastic. It’s reminiscent of a mix of the Batman Arkham series and Assassin’s Creed, albeit simplified in a sense. The combat feels very Batman-like but is a lot more forgiving. There is a free-flowing aspect to it that allows you to dance around from enemy to enemy with ease, transitioning between strikes, throws, and executions without any sort of hiccup or hesitation. This doesn’t require frequent button mashing but rather calculated / timed button presses a la Arkham. The timing of the button presses are a lot more forgiving here though as you can quickly switch things up at the last second and not interrupt your combination. The goal is ultimately to keep your string of consecutive attacks going as you earn bonuses for different benchmarks (just like Arkham). At certain points you gain access to additional moves and special executions that make it worthwhile to pick the legions apart with precision. 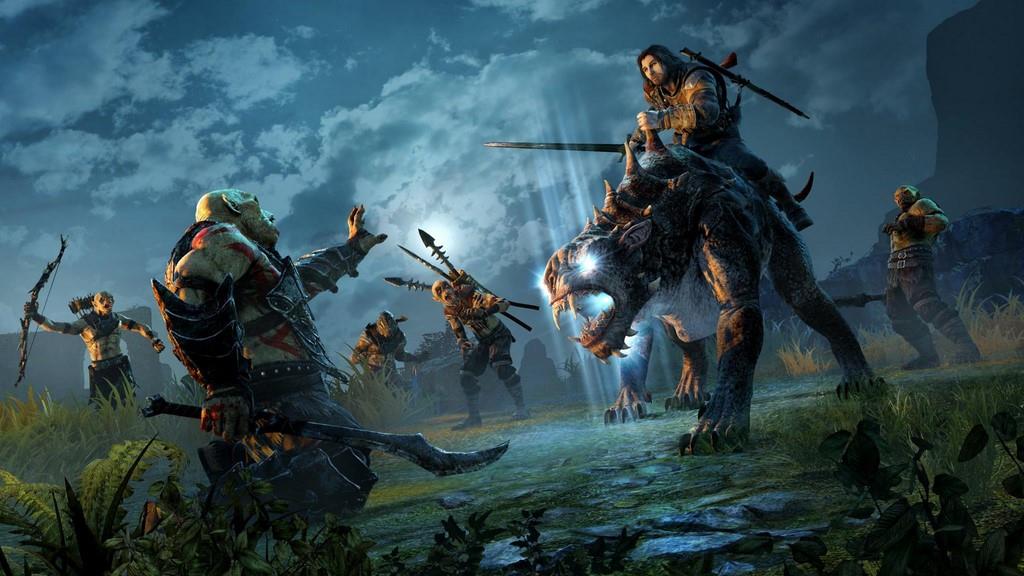 The same thing can be said for the movement throughout the game world. There is a sense of parkour present as you can climb and catapult up and around nearly every object or building in the environment. It all relies on a single button (the X / jump button), removing any sense of complication for the gamer. As long as your path makes sense, you can move through it smoothly like butter. The simplification of both the movement and combat systems allows you to pay more attention to the world and the characters around you, engulfing you more into the game and making the experience that much more enjoyable.

As you make your way around, completing missions in the open world and taking out hordes and hordes (and hordes) or Sauron’s troops you will earn the abilities to both improve your three weapons (sword, dagger, and bow) as well as your characters individual abilities. The game gives you plenty of options for shaping your character to your likings early on, between the skill tree and the runes that you place into your weapons, but it will lose its variety over time. Regardless of the path you choose in the characters’ progression, you will always end up being a godlike powerhouse by the end that simply slaughters everything in your path. All of the routes of progression head toward the same place, regardless of how you play. This is a little disappointing in hindsight but I have to admit that it is an incredibly fun ride regardless of what path your take.

The Nemesis System is the game’s bread and butter and what it will be remembered for years down the line as the title’s most redeeming quality. This system revolves around the evolution and alteration of Sauron’s army and you . Over the course of your gameplay, your actions in the game world will dictate how his legions of orcs and Uruks change in the ranks of the dark army. As you take out high ranking chiefs and generals, others will rise to power and take their place. However, should you be taken down (which will happen), be it by one of these figureheads or a low level nobody, they will gain notoriety and respect within their ranks. Being taken out by a stray arrow from a Uruk archer could be just the boost some no-name orc needs to begin his ascension to power. He will get a promotion within the ranks and a boost in his abilities. Plus, he will remember you and remind you of your previous interactions when you meet again. 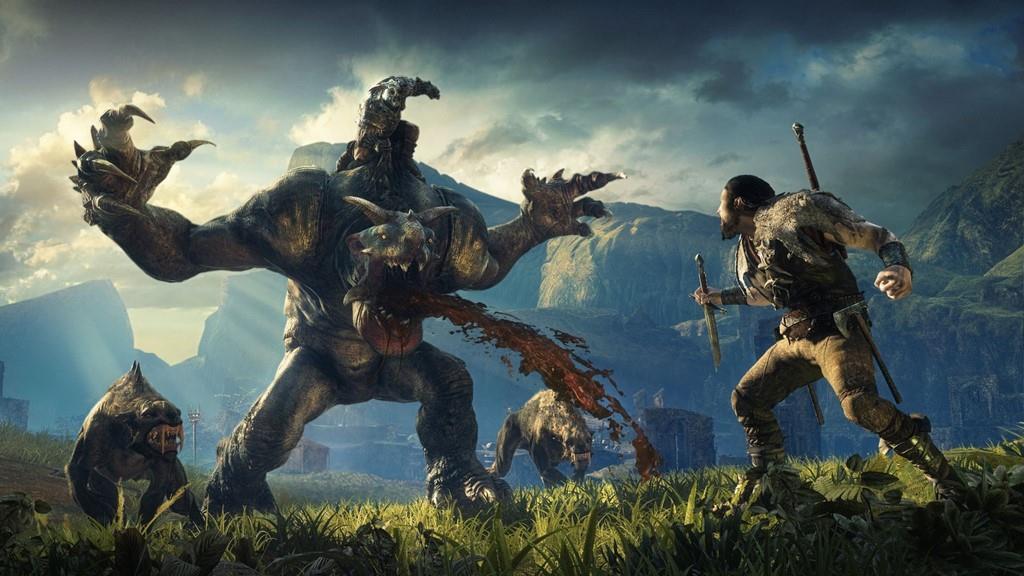 The ranks are always changing, both because of your elimination of the enemy and your death. You will die; it is a part of the circle of life within the game world. Hell, you even gain experience points for dying, even though you will simply be throw back from the netherworld to continue on your quest. You just have to learn from your mistakes and not make the same errors again. Throughout your quest you will discover intel on these various captains and learn their location, strengths, and weaknesses. This is all necessary to plot your path through the ranks to facing the Black Hand himself. It is really interesting to see the interaction between the ranking enemies and Talion, as rivalries will undoubtedly grow and take center stage between you and various Uruks. It is a new and extremely refreshing experience to see the relationship between the player and his enemies explored in as much depth as it is in Shadow of Mordor and something that I hope other games take note of in the future.

All in all, I thoroughly loved my adventure through the shadow of Mordor. Sure, it is a bit repetitive in the sense that the focus is on battle more than anything else, but the variety and smoothness of the combat system keeps it fresh hour after hour. I am sorry, but I don’t think that executing orc after orc in style will ever get old. There is a good variety of side missions to keep you busy in addition to the main quest, sending you all over the map collecting items and freeing slaves. While you do the same thing over and over, it is a lot of fun every step of the way. In that sense it sort of reminds me of collecting the blast shards in infamous or perhaps chasing down the orbs in Crackdown. The game instills a need to do every last one but it never really feels like a chore along the way. Plus, following in the steps of the Last of Us Remastered, if completing every mission and killing every enemy isn’t enough to keep you occupied, you can always turn on the incredibly addicting photo mode and chronicle your orc slating in style. I was expecting much when I threw this in for the first time but it ended up being one of my favorite games of the year, and it will likely be one of yours as well.

Middle-earth: Shadow of Mordor is the biggest “pleasant surprise” of 2014. A solid side-story from an established universe with spot-on gameplay makes this a surprise contender for one of the year’s best games.