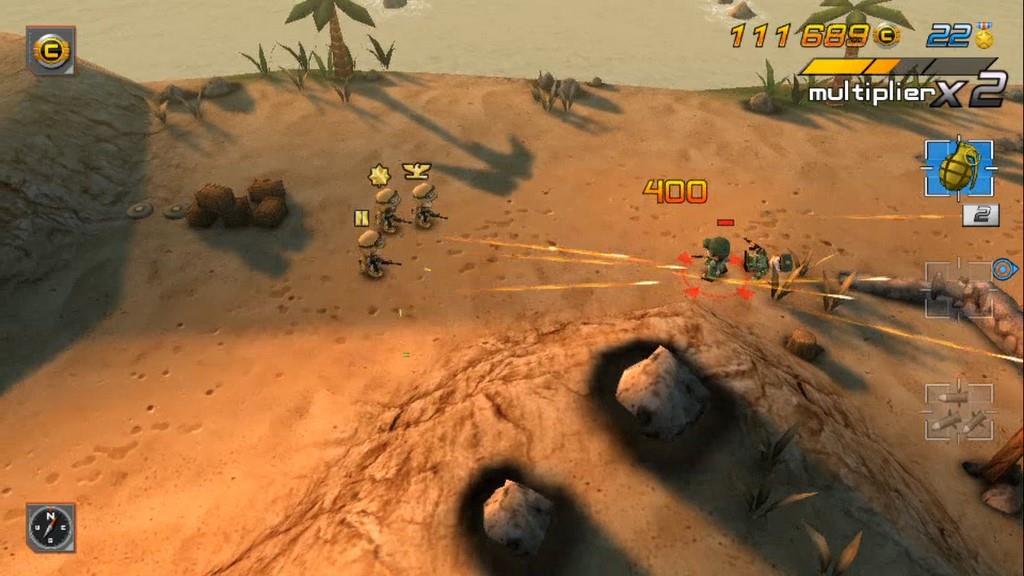 Written by Nathan Carter on 12/10/2014 for Vita
More On: Tiny Troopers Joint Ops

At this point, the PS Vita is pretty much an indie handheld for me and there is absolutely nothing wrong with that. These types of games are perfect to play on the go or in short bursts and I have tons of these games on my Vita. Tiny Troopers: Join Ops is just another one of those games. It is fun and great in short bursts, but the more I played it, the more I realized that I am just playing a mobile game on a handheld. This isn't so much of a problem, until you keep playing and you really start to see why this game worked so well on mobile platforms and while the game is fun, it can get extremely repetitive.

Tiny Troopers is a twin stick shooter. Your troop or troops start out on the battlefield and you have to complete objectives to complete the level. You move around with the left stick and shoot with the right stick. It's incredibly easy to figure out the controls right from the get go so this game is perfect for everyone as you can easily pick it up and play. While on the battlefield you will of course come in contact with enemies who will start shooting on sight as soon as they see you. You need to keep moving as well as it doesn't take too many hits for your troop to die. Levels don't last very long and you can easily breeze through most of the game rather quickly. They do throw a hoard mode in as well which is actually pretty fun. It wouldn't be a WW2 shooter without zombies now would it? Yup, you get a zombie hoard mode in the game as well and it's actually pretty fun. You start out as a single trooper in a small section of the map and as you clear waves you unlock new sections and gain the ability to add more troops as well. You also earn special weapons as well as the ability to use genades a rocket launcher and the ability to call in an air strike. I almost wish the entire game was like this. The game is fun but only in short bursts. Play for a while and some issues rear their ugly heads.

After a while, you start to realize that the AI in the game isn't really smart. As I said before, the enemies will start shooting you on sight but it doesn't seem like they really make an attempt to come after you. They do move towards you but you can simply just duck behind some kind of cover and they will stop shooting until you are within eyesight. They don't come after you so you can just keep ducking in and out of cover until they are dead. The objectives for each level vary and include simple tasks such as killing all of the enemies in the level, or destroying all the enemy buildings. Buildings are hard to take down with just your gun so you will need some heavy fire power. On the battlefield you will find other weapons including grenades and a rocket launcher which you use by tapping your finger over the weapon and dragging it to where you want to go. Also on the battlefield you will find civilians and chickens. Yup chickens. Killing either of these will result in a loss of points. Of course the civilians are only there to be an annoyance as they have no problem whatsoever running right into the middle of a gunfight just to be killed.

In some missions you will bring multiple troops with you and unfortunately this becomes a huge problem. You control all three soldiers at the same time and because of this, you will often find one of your soldiers getting stuck in walls or various terrain when trying to move around. This is incredibly frustrating and becomes a huge problem when multiple enemies are on the screen. I was so focused on moving around to avoid getting hit by enemies that I didn't even realize that one of my soldier is stuck behind a building. Like I said before this game is good but in small bursts. The main reason for this is that it's extremely repetitive. Aside from objectives changing, most of the levels play out exactly the same way and are pretty short. If you are so inclined however, you can always replay levels to try and gather all the collectibles. Dog tags and medals are strewn throughout each level and will earn you more currency. Medals are a form of currency as well and can be used to unlock new special soldiers to bring with you and to revive dead soldiers. In terms of reviving dead soldiers, this is something you really have to look out for. Just like XComm: Enemy Unknown, your soldiers level up and become stronger as you play. Death however, is forever. If a soldier dies on the battlefield then they are gone for good unless you choose to revive them so you really want to be extra careful. 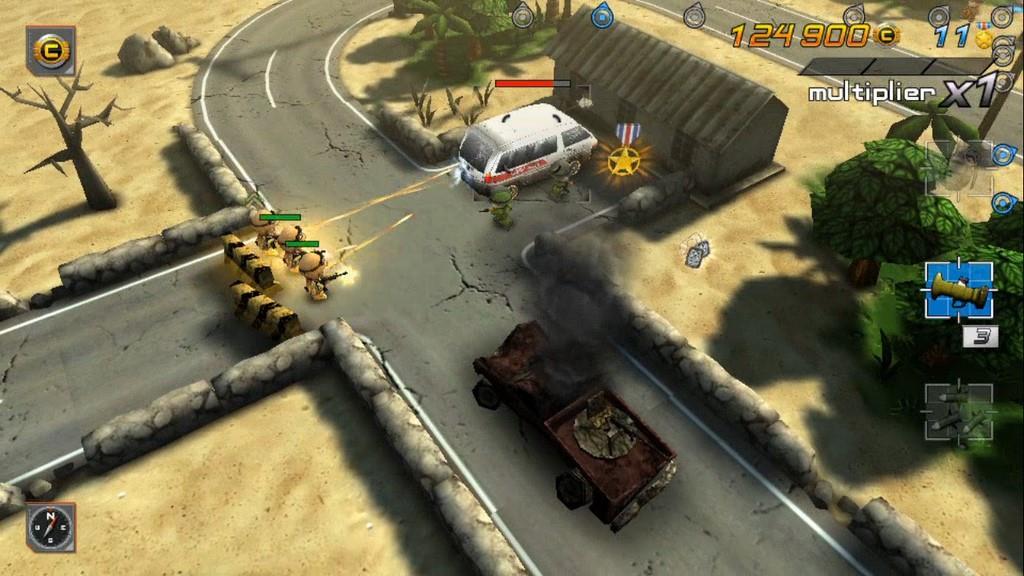 I mentioned that finding dog tags earn your currency and I find it interesting that there aren't any micro-transactions in this game. Not that I'm complaining, and I am glad that there aren't but this game really seems perfect for it. Almost everything you do in the game to upgrade your soldiers is done with said currency. For instance, you can upgrade your gun to allow your bullets to shoot farther, or allow you to have faster fire rate, or you can upgrade your soldiers so they take less damage. Each upgrade has a tier and gets more expensive with each upgrade you buy. The problem is that all of these upgrades are extremely expensive. Of course you can earn plenty of currency by replaying levels but to get the best upgrades, you are going to have to grind for a bit. There are other items you can buy with currency also like cosmetic items for your soldiers that are extremely expensive as well. It seems like micro-transactions may have been intended to be in this game at one point but were taken out at the last minute. The items you can buy which will drain your cash quick however are special soldiers that you can only bring with you on a single mission. Soldiers like a Medic who can heal wounded team members, a Machine Gunner that has a lot of fire power, and a Gatling Gunner that mows down anything in it's path. These soldiers cost a decent amount of money to recruit, so much to the point where it feels like they are counter productive as you wont be able to buy upgrades to your weapons and your soldiers which is way more important.

Also included with this version is Spec Ops mode which was additional story content in the mobile version of the game but it's just more missions to play. Not much really changes with these but it is nice that they included them anyways to make you feel like you got more bang for your buck. Of course, since it's more of the same, this may also cause the game to feel more repetitive. I can understand this though as it was a mobile game and you can tell that it was based on the fact that almost everything you do in the game besides for controlling your soldier on the battlefield is done with the touch screen. I almost forgot the Vita had touch controls cause when I started the game, I couldn't navigate any of the menus. I thought my PS Vita was broken but then I figured out that you have to use the touch screen to navigate them. 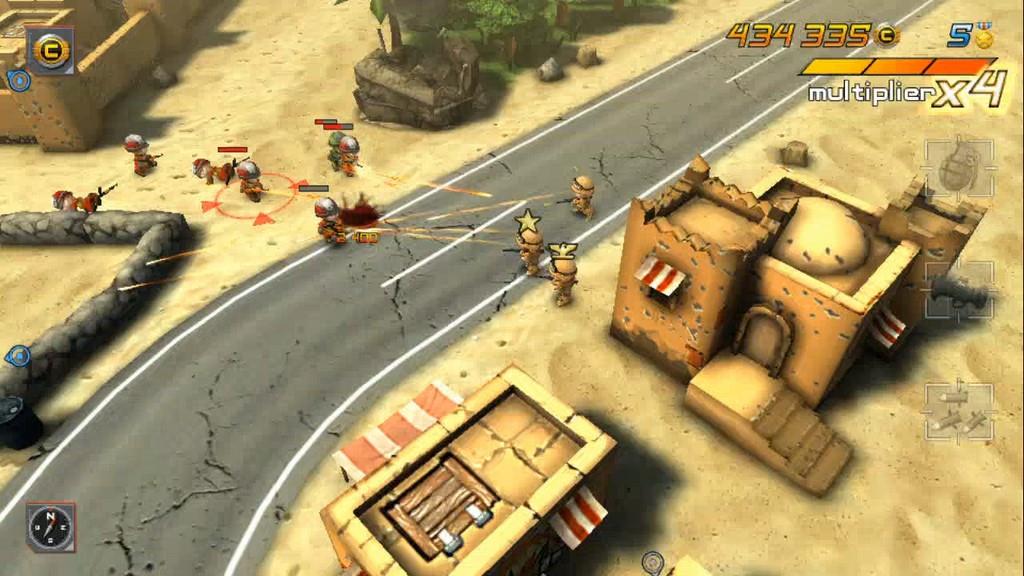 All in all, Tiny Troopers is a decent game to play on your Vita if you like Twin Stick shooters. The game can get pretty challenging at times, even on normal difficulty and the levels are short enough that you'll want to play through them multiple times, but progressing through the game in a marathon session probably isn't going to happen. The great thing about the Vita though is that with most of it's games, you can just set it down and come back to it later. If you don't have your Vita handy, for whatever reason, the game does include PS3 / PS Vita cross save so that is a plus as well. I have never played the game on mobile but I would assume it's exactly the same, so if you already have that version, there may not really be a reason for you to pick up this one, but for those who don't I would recommend it.

Tiny Troopers: Join Ops is a fun, little twin stick shooter that you can play on the go. While it can get repetitive at times, it provides enough enjoyment that you will probably come back to the game in short sessions. There are some things in the game that do get extremely annoying at times but I think the positives certainly outweigh the negatives here.