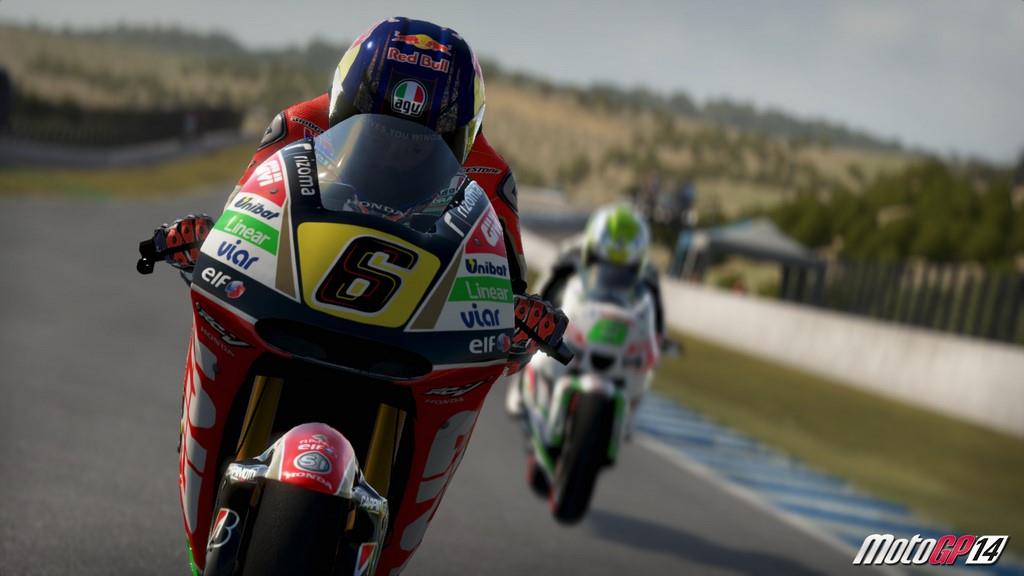 Normally when an annual franchise makes the leap to brand new consoles, there's a year or two where everybody focuses on the presentation at the expense of extra modes. Sure, the game may still be fun, but the overall package is almost always disappointingly barebones. Thankfully, that's not the case with MotoGP 14, which makes its next-generation debut with a dizzying amount of modes and extras.

This is the follow-up to Milestone's MotoGP 13, which was a moderately well-received racing game for PlayStation 3 and Xbox 360. It attempts to simulate all three MotoGP World Championship classes -- Moto3, Moto2 and MotoGP. With all of the official courses and drivers, this PlayStation 4 sequel does a good job of recreating the popular sport.

Although the game comes with no fewer than seven different single-player modes, it's the MotoGP Career that ends up being the most substantial. Here we're given a chance to not just create our own racer, but send them on a quest to win races, build a fan base, gain notoriety and eventually become the biggest name in two-wheeled racing. But before that can happen, you'll need to outclass the sport's most popular drivers.

Your career will take the race team across the world, competing on all of the best real-world tracks. Fans of the sport will enjoy the beautifully recreated versions of Le Mans in France, Mugello in Italy, Assen in The Netherlands, Misano in San Marino, Motegi in Japan, Phillip Island in Australia, and even Indianapolis right here in the United States.

As the race team begins to win championships and outperform the competition, we're awarded points that can be used to upgrade the bikes. This will also catch the eye of more popular teams, allowing the player to sign a new contract and take their game to the next level. And because the career simulates all three Moto classes, players will enjoy a lot of exciting races and contract negotiations.

Even if you're a seasoned race fan, this game has a steep learning curve. I quickly discovered that MotoGP 14 intends to be played as a simulator, and thinking of it as an arcade racer will only result in frustration. Much like riding a bull, it felt like my bike was actively trying to throw me to the ground. From accelerating too quickly to taking a corner too slowly, I had the hardest time staying on my expensive motorbike. After picking myself up from so many accidents, I began to wonder if I had what it takes to beat the world's best racers.

If we're being completely honest, I wouldn't stand a chance up against any of the new or old MotoGP champs found in this game. But who cares about reality, because I suddenly have a fighting chance when I turn on the driver assists. With an impressive set of options that can target very specific elements of the racing experience, Moto GP 14 allows players a chance to fine tune the challenge.

Even with the assists turned on, the game's computer drivers put up a strong fight. These are not the AI opponents I'm used to racing against in other games, and I felt like I had to play to perfection in every event. Thankfully, the game gives us a few opportunities to rewind the action if something bad happens, allowing players a chance to get out of a race-ending crash.  But don't get too excited, because that's about the only help you're going to get when going up against the likes of Jorge Lorenzo and Valentino Rossi.

Beyond the career, players can take on their heroes in an exciting mode called Challenge the Champions. This forces players to win a number of increasingly difficult challenges, such as battling during a rain storm or winning a race using an underpowered bike. This challenging mode has a fun combination of both real and fictional scenarios, and is a fun change of pace from the standard career races. 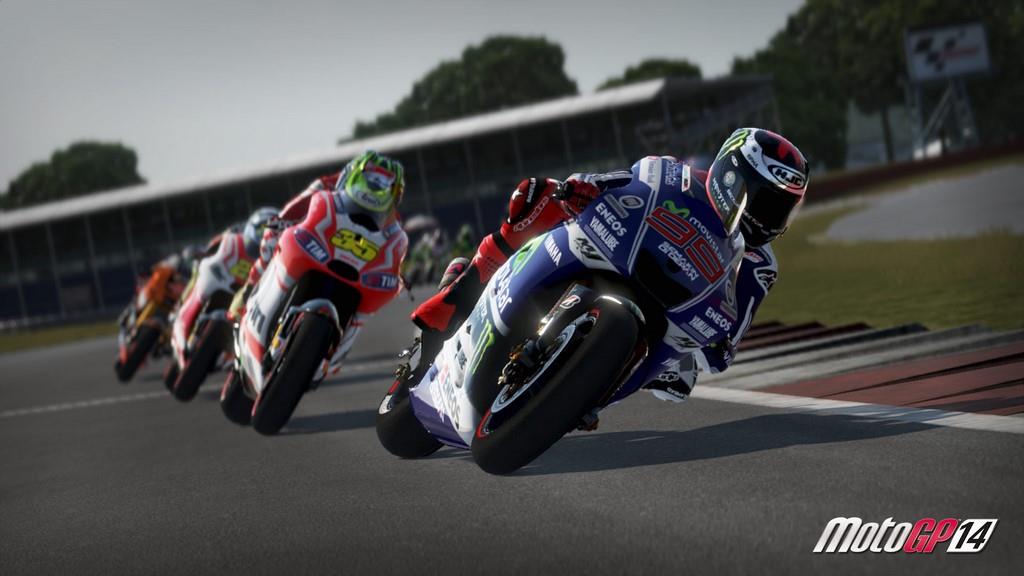 For those sick of simply going up against the greats, MotoGP 14 offers a number of ways to play as the biggest stars of the sport. The most compelling of these modes is Real Events 2013, which attempts to recreate some of last year's most spectacular moments. It probably won't surprise you that many of these memorable moments involve unlikely comebacks, so expect to see that situation play out in a number of different ways.

The other modes involve creating your own custom races in the Grand Prix mode, racing against the clock in Time Attack, taking on a bunch of challengers in the Championship and even spending some time driving the safety car. It's hard to imagine any MotoGP fan being disappointed with the assortment of modes found in this PlayStation 4 game.

As great as the variety is, this racing game does hit a few speed bumps along the way. For starters, it would have been nice if there was more to the races in the career mode. While I enjoyed choosing my teams and customizing my character, all of the events play out the same way. I wish the developers would have taken a page out of Forza's playbook and created unique challenges to break up the monotony of the race events. 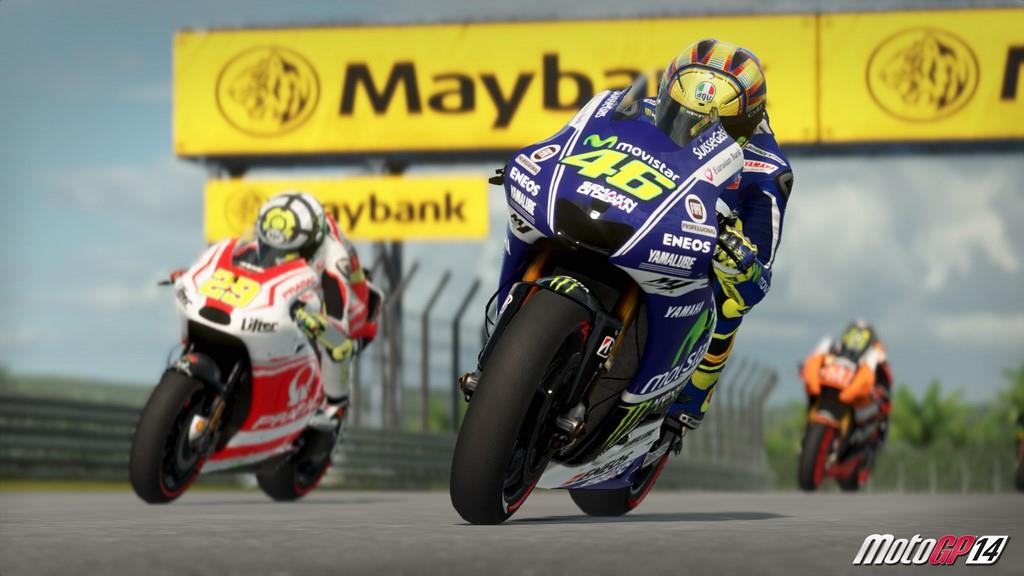 I was also disappointed with the presentation, which looks a little dated on the PlayStation 4. For what it's worth, the game does look better than its PlayStation 3 and Xbox 360 counterpart, but it pales in comparison to Forza Horizon 2 and DriveClub. Sure, it's fun jetting off to different locations around the world, but too many of the courses look the same. There simply isn't enough variety in the color scheme, especially given the exotic locales.

On another note, I was disappointed with the weather effects. The rain storms don't look especially realistic and the wet track doesn't seem to impact the gameplay. It's also a shame there aren't more weather conditions to choose from, such as fog or hail. These may sound like minor gripes, but it goes to show that there's still a lot to work on for the 2015 model.

MotoGP 14 offers fans of the sport a lot of online and offline options, making it one of the PlayStation 4's most robust racing games. Even with a mountain of compelling content, I was disappointed by the game's outdated visuals and single-minded career mode. MotoGP 14 is a fun racing game that will no doubt be usurped in a matter of months.

While not as polished as other racing simulators, MotoGP 14 does a good job recreating the exciting sport. With a dizzying amount of single-player modes and a worthwhile online component, this game will keep fans of motorcycle racing busy for months to come. Too bad the visuals look so outdated and the career mode lacks variety.