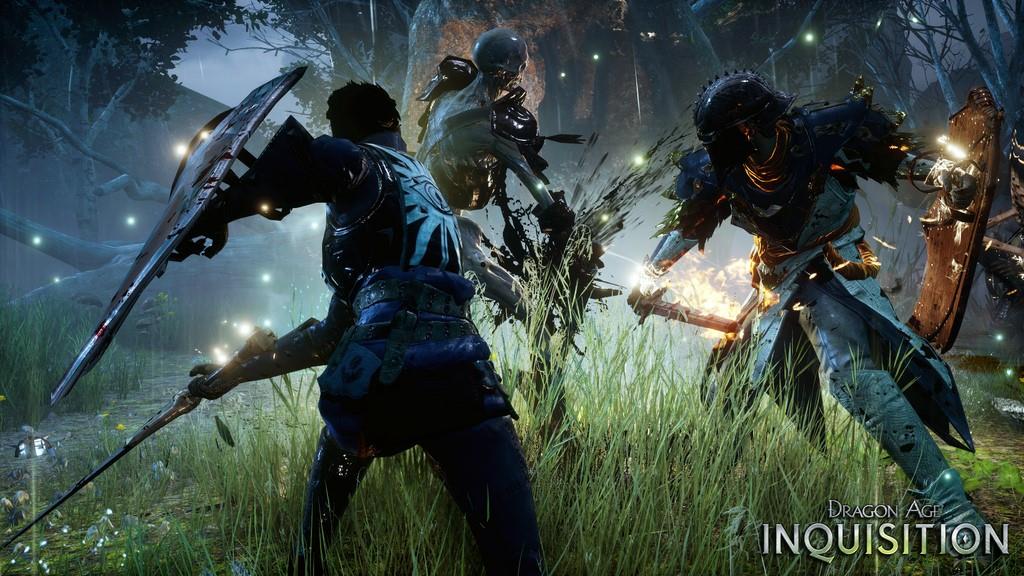 The Hero of Ferelden. The Champion of Kirkwall. The Inquisitor. BioWare loves the hero. More importantly, they love crafting games that let us grow into a heroic leadership role, and Dragon Age: Inquisition is no different.

After the events in Dragon Age II, which saw the Champion of Kirkwall’s mage buddy, Anders, destroying the Kirkwall Chantry and sparking a civil war between the mages in southern Thedas and their templar overseers, Chantry seeker Cassandra Penderghast wants answers. In DA2’s bookends, she grills crack archer, rogue, author, and all around cool dwarf, Varric Tethras, about the events leading up to Anders’s act of rebellion. DA2’s bookends flow perfectly into the story of Dragon Age: Inquisition. Cassandra cannot get the answers she wants, so she drags Varric to the Temple of the Sacred Ashes for a sit down between the Chantry, the rebel mages, and increasingly fascistic templars so he can tell his story to this so-called Conclave.

The temple is destroyed in an explosion of unknown cause, killing everyone (Varric and Cassandra hadn’t yet made it -- luckily for us) except for one. The lone survivor is seemingly touched by Andraste (Dragon Age’s Jesus figure) herself and marked. You are this survivor and your mark has the power to seal the rifts between the real world and the veil opened by whatever force was responsible for the explosion. His or her name, race, and gender are up to you. All the common races of Thedas are represented; you can even be a qunari if you want. While each race lacks a playable origin story like Dragon Age: Origins, there is a stock background for all that affects in-game events. You can expect a pretty standard set of face customization options for a BioWare game; however, there are some new extra features that let you get very detailed. If you can’t craft an inquisitor to your liking, you’re not trying hard enough.

Class customization makes an expected return also. The three base classes make an appearance: the warrior, the rogue, and the mage. If you played DA2, this will seem very similar. Warriors break down into two types: sword-and-shield tanks and two-handed-weapon-wielding damage dealers. With the rogue, you can be an archer or a dual-dagger-wielding assassin. Finally, the mage can cast fire, ice, and electricity spells for damage, and a spirit spell for support. You’re not locked into any kind of specialization either. Again, if you played DA2, you’ll be very familiar with the classes, skill trees, and use of said skills. It’s basically identical.

Not identical this time around is the multiplayer. Based on Mass Effect 3’s popular four-player co-op, Inquisition also features four players working together in objective-based maps. Unfortunately, because of a conflict between Inquisition's online components -- which extend to data uploading and the like besides multiplayer -- and the PS4’s recent firmware 2.0 update, I was not able to partake in any Inquisition multiplayer, but we’ll be sure to post our impressions once we’re able to try it. 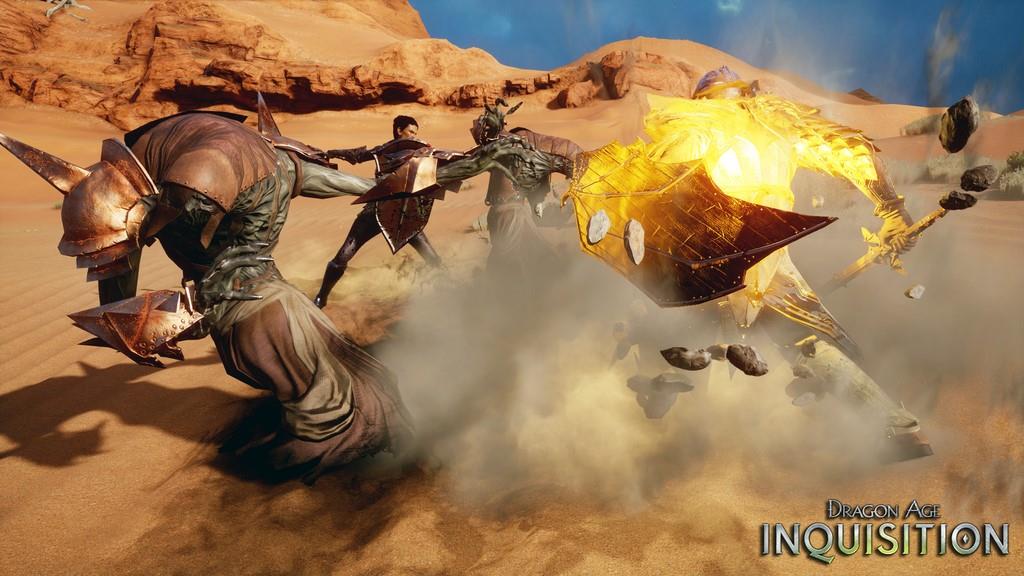 Once you’ve selected your race, gender, and class, you are cast into the action. It’s action that will feel at home to series fans. You’ll travel with three other followers most of the time, and be able to hotkey eight abilities for each individual. In combat, you can let your followers be and allow them to act according to a handful of parameters you set. It’s not as in depth as the behaviors you could customize in the first two games. Gone are the “if, then” AI follower combat routines. For me, I always just turn that stuff off anyway so I can maintain maximum control over my inquisitor and her followers in combat. If you choose to leave that stuff turned on, you can still use it to govern how and when they use health potions, skills, and how they prioritize threats in combat.

Whether you leave those features on, or turn them off like I do, you can, via the PS4 controller’s touch pad, pause the action and give orders to your party. But you can only queue up one skill at a time. I don’t like that. Regardless, Inquisition gives you a fairly high degree of control over how the combat plays out and how you and your followers behave. Even if it’s not as hardcore and minutiae-oriented as older role-playing games, it’s about as good as it’s going to get on modern consoles. Beggars can’t be choosers, I guess. Ultimately, I found the combat compelling, and I liked that they replaced DA2’s endless waves of mooks led by a few difficult enemies with smaller groups of harder enemies. It still sucks to get drawn into combat with three bears and two constantly cloaking rogues, but it’s no longer an overwhelming problem -- just one that requires some thought to deal with. 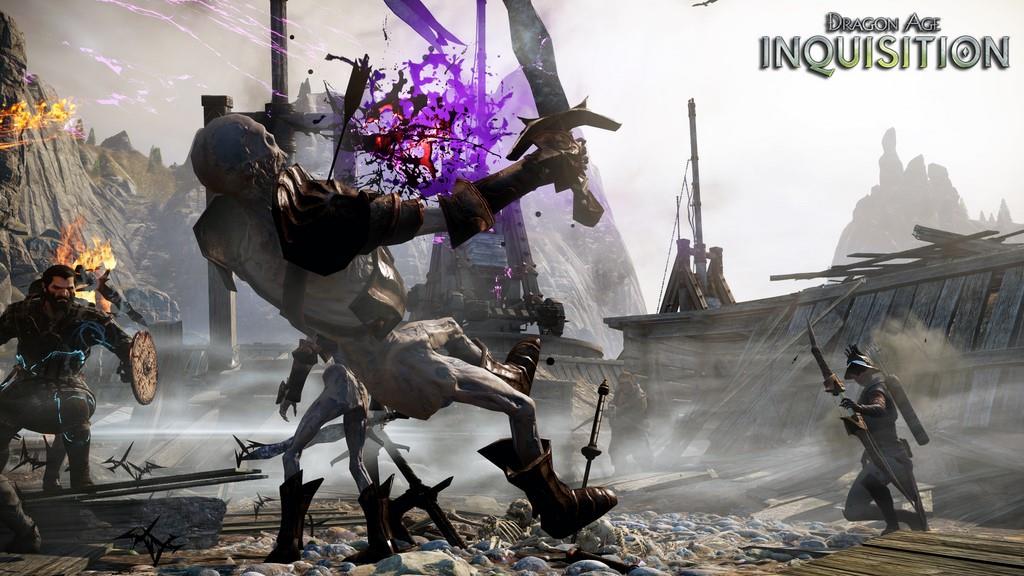 Of course, BioWare games are as much about a good story and memorable characters as they are thrilling gameplay, and I’m happy to report that Inquisition offers a story and cast of characters as compelling as you’d expect. The Dragon Age franchise has a dense mythology, and Inquisition takes advantage of the very interesting dynamic between the mages, the templars, and the mystical realm known as The Fade where demons reside and mages walk when they dream. The franchise again asks you early on what side you feel is more right. Do the mages deserve freedom and a chance to exist outside of templar control despite the danger they pose to the rest of Thedas due to their connection to The Fade that can lead to demonic possession or worse? Or do the templars have the right to exercise their church-sanctioned authority over the mages in the name of protecting the average farmer from having his house burned down and his family murdered because some mage became possessed by a rage demon from The Fade? It doesn’t necessarily ask you this directly, but you will choose even if you just make the choice in your own head and then let it affect how your inquisitor treats the people he or she comes in contact with. That, to me, is the biggest success of the Dragon Age story as it’s been told over the course of three games. It’s maybe not ever going to permeate the greater gamer consciousness like whether or not Commander Shepard cures the genophage or sides with the quarians or geth over control of Rannoch. In terms of long-term storytelling, however, it’s a wonderful moral quandary for a video game to pose, even if indirectly.

Luckily, the characters you meet, both returning and brand new, continue to impress. This is the one thing I did expect from Inquisition. I don’t want to be too specific, to avoid spoilers. I’ll just say that everyone who typically enjoys BioWare’s characters will almost surely find someone to become their new favorite. For me, it was Sera. Everything from her silly attitude and her accent, to the actual design of her face, mannerisms, and clothing were excellent and memorable. Freddie Prinze Jr.’s turn as the qunari merc boss, Iron Bull, is also worth mentioning. If you’ll remember, the former teen heartthrob did the voice of Mass Effect 3’s beefy flirt, James Vega. He’s essentially playing the same character here, and even though he was a bit divisive in ME3, he was my favorite new character from that game mainly because of Prinze Jr.'s performance, and it was nice seeing a different interpretation of the character in Inquisition. 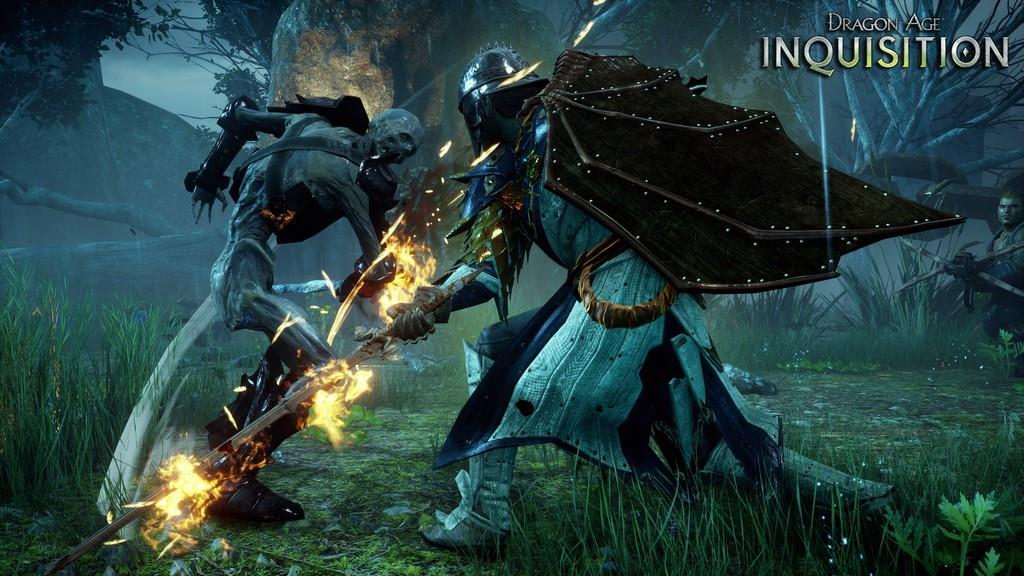 Graphically, this is the first BioWare RPG to utilize the Frostbite 3 engine, and it does so with great aplomb. The game is a subtle kind of gorgeous. It is the kind of subtle gorgeous you can mistake for underwhelming at first (in fact, the first notes I made were "underwhelming visuals") but after a few tens of hours, I found myself staring in awe at the scenery. The visuals are further aided by the complexity of the areas themselves. First, they’re generally far bigger and more varied than they were in DA2, and secondly they’re much more visually interesting -- just full of narrow paths that lead off in unexpected directions, caves, ruins, and rivers that all provide new things to do and see.

And as far as things to do and see, there are lots. The number of quests that show up can seem overwhelming, and often whenever you turn a corner, you’ll see another exclamation point on the map that denotes another quest giver. Inquisition really is a huge game. The so-called critical path will take roughly 50-60 hours to complete. However, between side quests, getting to know your followers, customizing your Inquisition headquarters, and exploring the new and fairly deep armor and weapon crafting system, you could easily double the amount of time you spend on the critical path. If you like games that are time sinks, Inquisition is your game.

To put it in as few words as possible: Inquisition is a splendid game as the next-console-generation successor to BioWare’s catalog of great action RPGs. It looks excellent. The story and characters are memorable. The gameplay lets you be almost as tactically minded as anyone could ask for. And it’s all tied together by a typically beautiful soundtrack and Hollywood-quality voice acting.

If you are looking for a time sink of an RPG with a strong sense of setting and character, then look no further, because Dragon Age: Inquisition is a Game of the Year candidate.