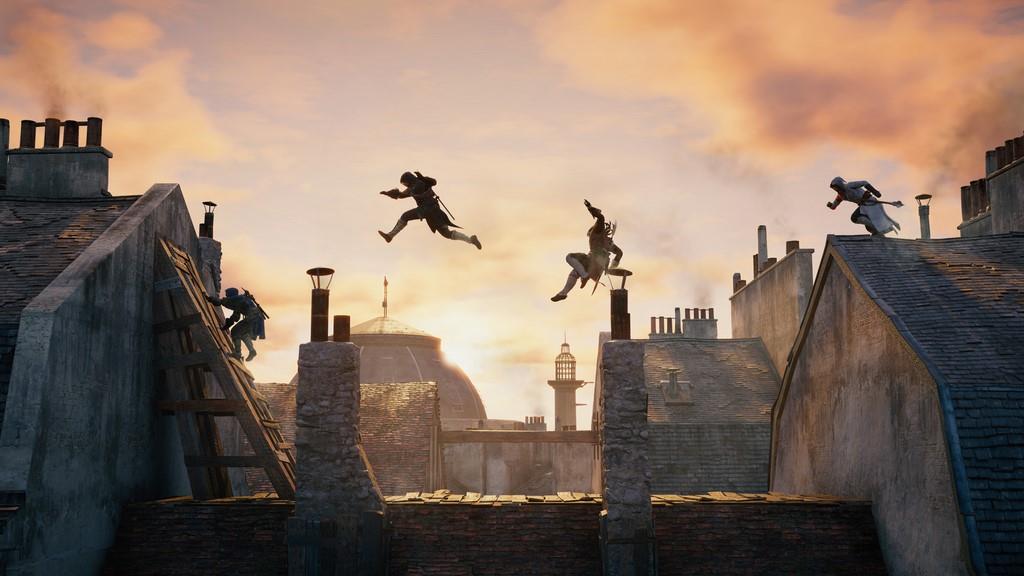 As annualized sequels go, the Assassin's Creed series has done a good job of keeping each installment fresh, thanks to a revolving door of new time periods, characters and historical hijinks. From sailing the high seas as an 18th century captain to battling street thugs during the Crusades, we can go anywhere and be whoever we want. And when a sequel disappoints, the storyteller has the luxury to simply press the reset button and skip to a different era.

Assassin's Creed Unity hits that reset button, ripping us away from the tropical splendor of the Caribbean and dropping us right in the middle of the French Revolution. It's here that we're introduced to Arno Dorian, a likeable swashbuckler with a good sense of humor and knack for thievery. Unfortunately, he finds himself in the wrong place at the wrong time and is framed for murder, setting in motion a series of events that will eventually lead to King Louis XVI losing his head.

Seeing a way to exact revenge and right some wrongs, Arno teams up with a secretive organization of assassins that are working to defeat the well-connected Templars. It's a battle we've seen play out many times before, only this time around it takes place as the streets of Paris descend into anarchy. I have mixed feelings about how successful the game's story is, but there's no denying that this is a period of time ripe with potential.

Although Assassin's Creed IV: Black Flag was ported to Xbox One and PlayStation 4, this is the first Assassin's Creed to be built from the ground up for the new hardware. If you're hoping for sweeping changes, then prepare to be disappointed. Despite the improved visuals, this is still a lot like every other game in the franchise. The gameplay remains largely unchanged, and fans of the series will feel right at home with the variety of missions. For better or worse, this is an Assassin's Creed game.

My big takeaway from Unity is that Ubisoft has been listening. I noticed that some of the most tedious types of missions play a reduced role or have been eliminated entirely. For example, the story doesn't require players to slowly tail important characters while eavesdropping on conversations. The chase sequences seem tighter this time around, complete with the types of dramatic flourishes you would expect from new hardware. The chase path is usually clear, and I never ran into the problems that made Assassin's Creed III so controversial.

The developers have made some big changes to the assassination missions, adding more sandbox levels. Arno will be asked to kill a number of characters throughout the course of the game, and each of them will be in a large location with a bunch of guards, entry points and hiding spots. These can be tackled in a number of different ways, though usually it involves picking off the dozens of guards one at a time. Once you've killed the target, we're treated to a short cinema which explains that character's role in the conspiracy. 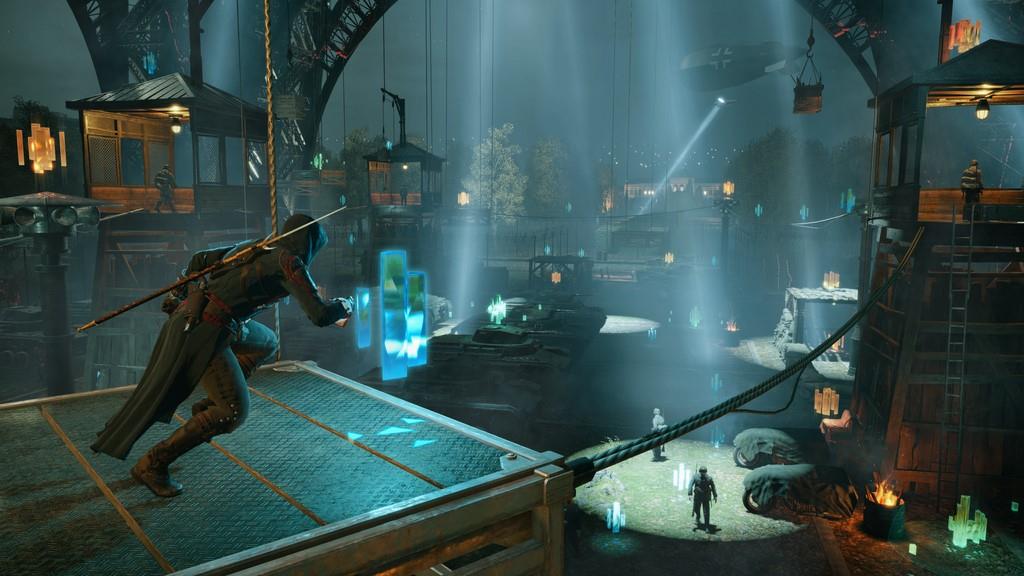 Some of these changes are smart, as it forces the players to make decisions about how they want to tackle the various assassinations. As tempting as it might be, Arno can't simply run into a mansion, stab the target and then run back outside. This sets up a situation where we're encouraged to use all of our training and toys. In some ways this is the highlight of Unity, as it has us planning kills in many of the most famous (and beautiful) locations of all time.

Unfortunately, these assassination missions are held back by one simple problem: checkpointing. To be more specific, it's the lack of checkpointing that can turn these otherwise fun levels into a frustrating nightmare. Because the stages are so large and there are dozens of guards spread across a massive compound, successfully pulling off these missions can take a good chunk of time. But all that effort can be wiped away in an instant, because dying makes the enemies respawn and the player is forced to do the whole thing over again. Losing all progress after picking off guards for a half hour is infuriating, and it nearly led me to quit on several occasions. And that's sad, because these missions are a huge step in the right direction for the franchise and are undone by one simple problem. 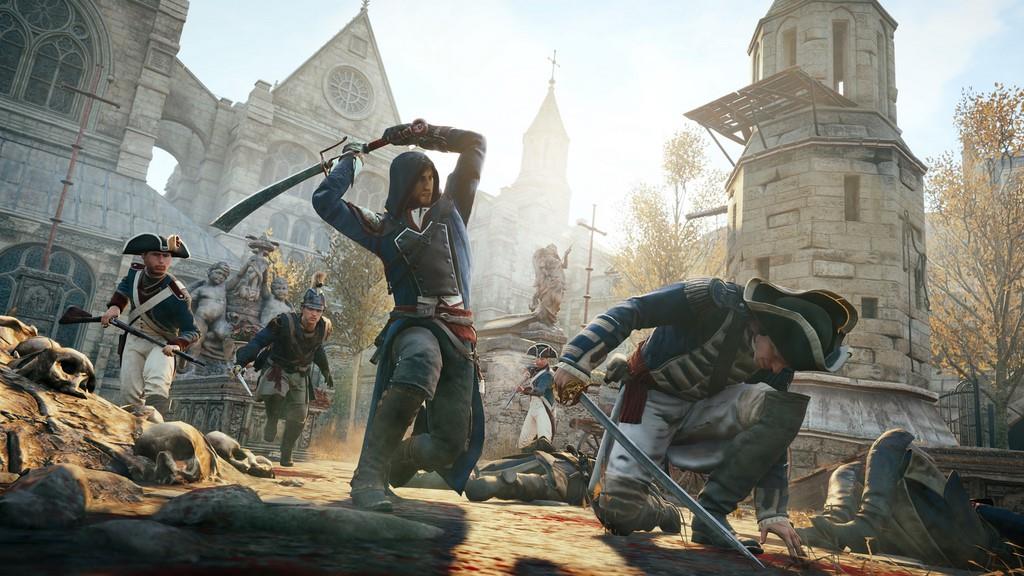 Beyond the specific assassinations, Unity also comes up short in a few other ways. For one thing, the story isn't as gripping as Brotherhood or Black Flag. It certainly doesn't help that the story takes too long to get going and the historical elements felt more like a backdrop in the first half. Too much of the story feels like it's sewn together with all the elements we've seen before, and I wish something new was brought to the table.

Arno is a much more likeable protagonist than Connor from Assassin's Creed III. Early on we're given a peak at his fun-loving, good-natured side, which is immediately reminiscent of Ezio. Sadly, the moment he puts on his Assassin garb, Arno becomes a terrible bore. Still, the sense of humor does manage to bleed through, and I wouldn't be opposed to playing further adventures starring Arno Dorian.

On the other hand, the historical supporting cast is a big disappointment. Marquis de Sade is barely in the game, and Napoleon Bonaparte sets up a much more interesting story (which will likely be explored in a sequel or downloadable content). The game's most interesting character is Elise, one of Arno's childhood friends and a strong woman who is more than capable of defending herself. She and Arno have good chemistry, and she is the one that largely keeps the story on track. 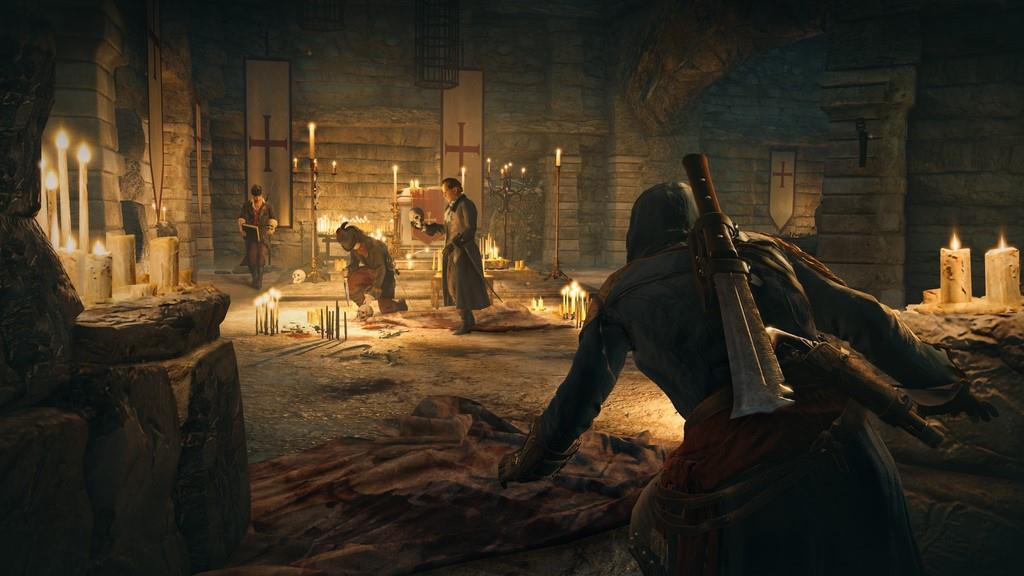 It's not that the story isn't compelling, but rather that it feels disjointed. Too much of the game seems like a battle between two secret groups, with the French Revolution tossed in as an afterthought. And even when the historical elements are sprinkled in, we're given very little context. Sure, players can read through pages of history lessons found in the menus, but it would have been nice to have seen more of the details written into the conversations.

The story largely takes place between 1791 and 1794, at a time when the streets of Paris were quickly devolving into violence and chaos. However, in the game, there's a jarring transition where it switches from everybody mostly getting along -- to everybody rioting in the streets. It's a big leap in time, and the dramatic change in mood on the street is never fully explained through the cinemas. I started to wonder if I had missed an important chapter or cutscene.

Instead of jumping in and out of the animus like past installments, Assassin's Creed Unity introduces a weird time travel element. There are multiple times when Arno will be forced to jump into a portal, taking him to several different locations. The first is about a hundred years into the future, at a time when the Statue of Liberty was being built and the French Revolution was a distant memory. I won't spoil the other jumps, but thoroughly enjoyed seeing the same location in other time periods. I hope we see more of that in future Assassin's Creed games. 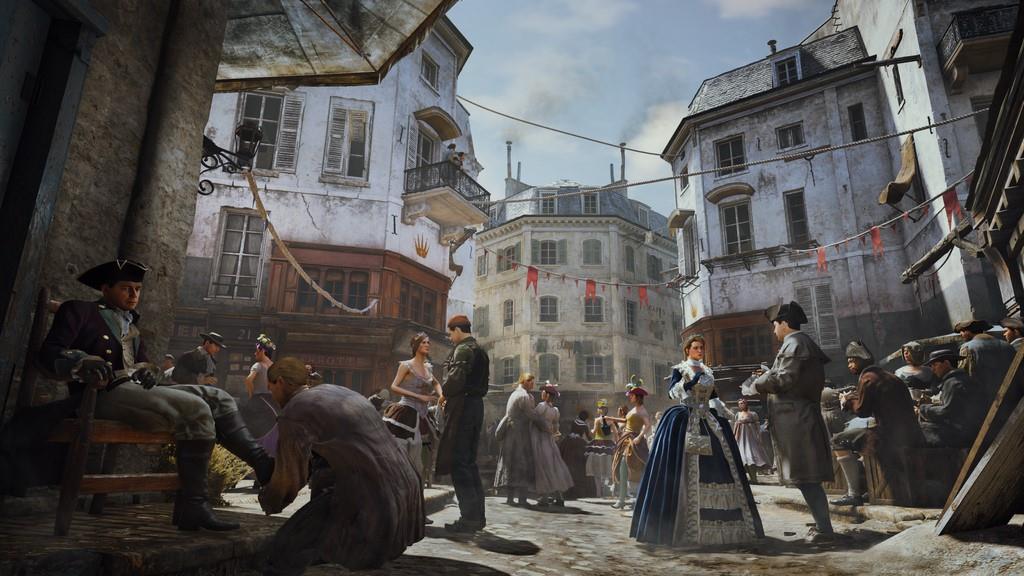 If there's one thing the developers at Ubisoft developers are good at, it's creating compelling worlds, and 18th century Paris is no exception. The urban sprawl is thickly populated with tall buildings, instantly reminiscent of Assassin's Creed II. The districts not only look great, but they all have their own unique atmosphere. Still, I had a hard time going back to this kind of packed city after spending the last game on the high seas. It's not that I wanted another pirate adventure, but I was hoping for landscape with a bit more variety.

Although the trailers suggest that co-op multiplayer is a big focus in this new game, the truth is that it plays a secondary role to the main story. None of these missions are directly tied to the main narrative, and many are simply variations on stealing items and killing guards. I'm sure players will have a lot of fun playing (and replaying) these missions with new combinations of friends, but you shouldn't go in expecting a deep co-op experience.

While it's nowhere near as good as Black Flag or Brotherhood, Assassin's Creed Unity is still a fun action game with an exciting story that weaves around real historical events. It hits the targets you expect and even shows signs of growth. It's a shame that some of the game's best ideas are marred by problems as simple as bad checkpointing and lack of context. It may not be the huge leap forward some were hoping for, but Unity is yet another solid Assassin's Creed installment.

Although it may be the first installment made specifically for the brand new consoles, Unity remains a traditional Assassin's Creed game. The setting and atmosphere is cool, but some of the best ideas are marred by bad checkpointing and a story where the historical elements often feel like an afterthought. Assassin's Creed Unity is a solid action game, but a disappointing follow up to Black Flag.