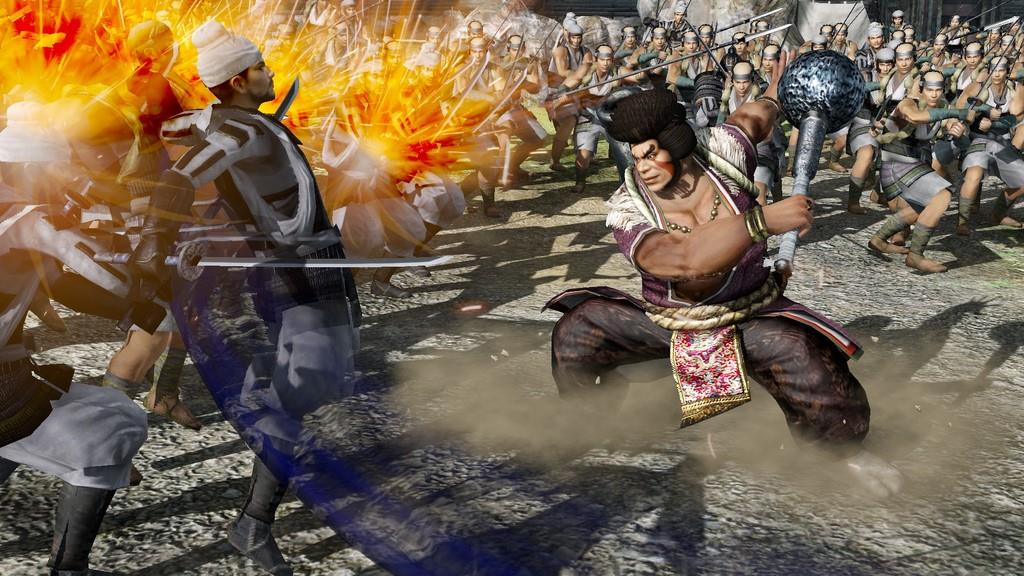 Without sounding overly dramatic, the last several months have left me a changed man. Prior to this summer, I was not much of a Dynasty Warriors player. I loved old school brawlers, but somehow missed the dozens of sequels, spin-offs and re-releases associated with this long-running series. But all that changed this past July, when I unexpectedly began a journey that saw me review three different installments in a row.

It all started with Dynasty Warriors Gundam: Reborn, a middling action game that largely reinforced my prejudices against the series. It was mindless to the point of being boring, and I didn't connect with the anime-themed universe. Fearing the series wasn't for me, I went into Warriors Orochi 3 Ultimate a bit skeptical. But with its time-travel conceit and ability to switch between characters on the fly, I was won over by the game's goofy charm. This put me in the right frame of mind for my next challenge -- Samurai Warriors 4 on PlayStation 4 and PS Vita.

If you haven't figured it out by now, this review isn't going to be as thorough as others on the internet. I have not played the previous outings and won't even pretend to know the differences between each installment. What I can say is that Samurai Warriors 4 is a whole lot of fun and offers enough changes to set it apart from both Warriors Orochi 3 and Dynasty Warriors Gundam: Reborn.

The game is split up into a series of vignettes, each based in a different region of 16th century Japan. It's the Sengoku period, which Wikipedia tells me was fraught with military conflicts and political warfare. Each region has their own sets of characters and unique challenges to overcome, which are all played out through a series of shorter levels. The missions are bookended with cinemas and conversations, which help to explain the struggles of unifying Japan.

While the history lesson is interesting (and wildly inaccurate), it's really only there to set up a bunch of battles where a superhuman samurai runs around the screen murdering thousands of enemy soldiers. If you've played a Warriors game in the past, then you already know what to expect. Many of the levels boil down to little more than racing from one area to the next trying to kill army captains and other named characters. Often a level will start with an objective that will change over time, making the levels a bit more unpredictable. But even then, it's easy to see how many of these skirmishes are going to play out. 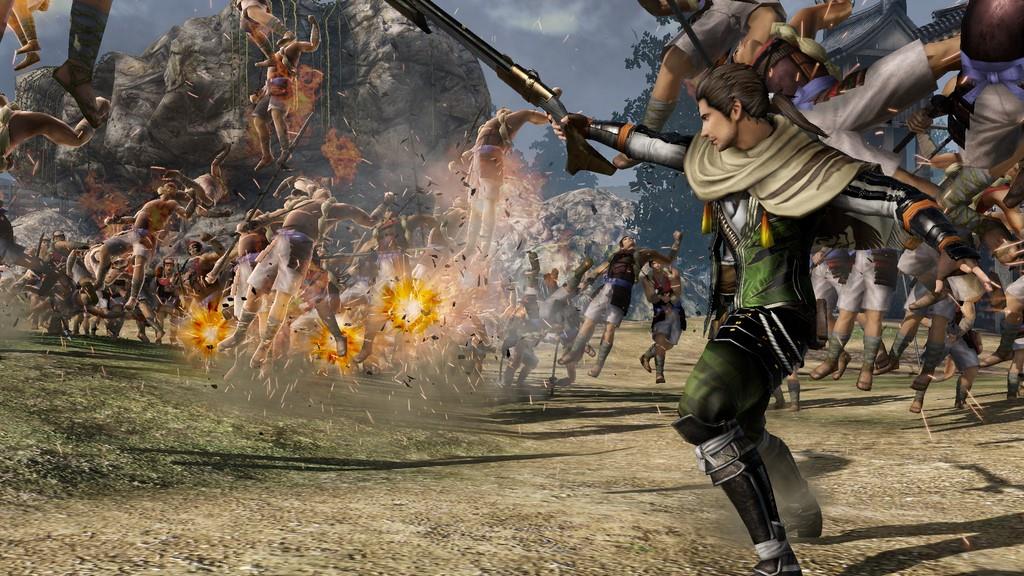 Part of the reason Warriors Orochi 3 Ultimate clicked for me is because the game allowed players to switch between characters on the fly. With well over a hundred characters to choose from, swapping between characters mid-battle was a great way to keep the action fresh. Samurai Warriors 4 has its own unique take on this mechanic, but the implementation left me a little disappointed.

Each level allows for a team of two warriors to go about their business fighting off the attacking armies. The trick is that these two heroes don't have to be anywhere near each other, so swapping between characters can mean finding yourself on the complete other side of the stage. This is a bit jarring at first, but there are ways you can use it to your advantage. Thankfully, we're able to bark orders at the computer-controlled fighter, moving the character into position. Despite being useful, I prefer the more action-oriented approach taken in Warriors Orochi 3.

Much like past iterations, players will do a lot of mashing on the Square button. The good news is that Samurai Warriors 4 brings more to the party than just repetitive button mashing. You also get a "Hyper Attack," which allows each character to cut through large crowds while dashing forward. Everybody's attack is slightly different, but the result is always the same. This sequel also incorporates "Rage Mode," which enhances our hero's attacks in spectacular ways. And don't forget about the "Musou Attack," which is a cinematic attack that can only be unleashed after filling up the Musou Gauge. 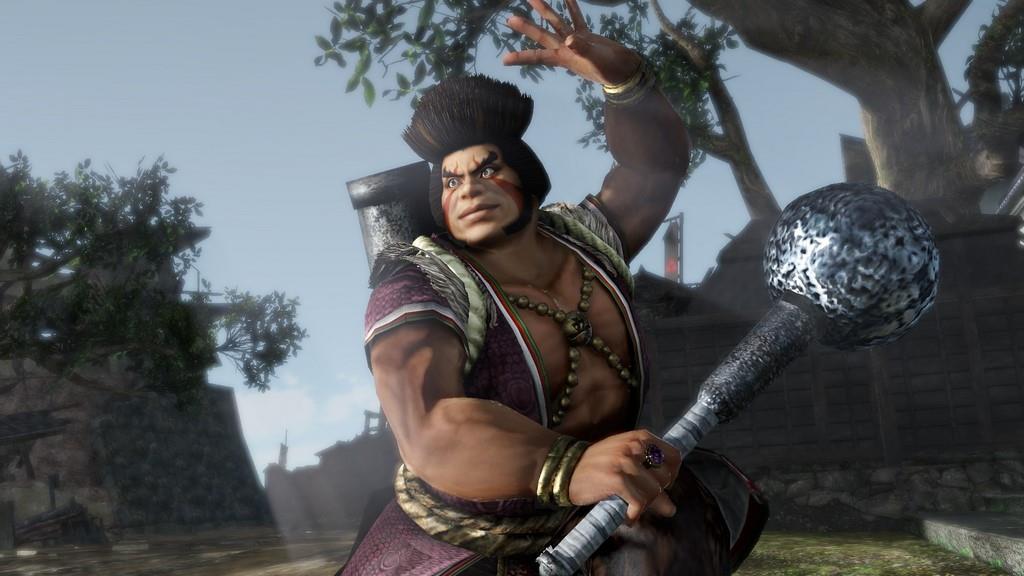 Those looking for a deeper experience may also enjoy the combo system, which manages to grow and improve as each character levels up. There's a "Spirit Charge" button that can be used to extend your combo, leading to some incredibly cool looking moments. And while none of this radically changed the Warriors formula, it did help to set this game apart from the two other installments I played.

Although the story is full of twists and turns, I found the bonus Chronicle Mode to be much more engaging. This mode has user-created characters navigating 16th century Japan like it's a turn-based board game. Each space has something unique to do, from waging war on another army to spending money at the item shop. You'll befriend like-minded fighters, cultivate the relationship and play through a series of short skirmishes.

While it may not sound much different from the traditional story mode, I felt much more invested in this Chronicle Mode than ever before. For one thing, it didn't feel like I was jumping into the middle of a complicated soap opera. My customized hero helped introduce me to a world filled with bizarre characters with confusing names. And best of all, many of the stages in this mode are shorter and show off a wider variety of mission types. It made the game bite-size, allowing me to play just enough to keep from getting burned out on Samurai Warriors 4's more repetitive elements. 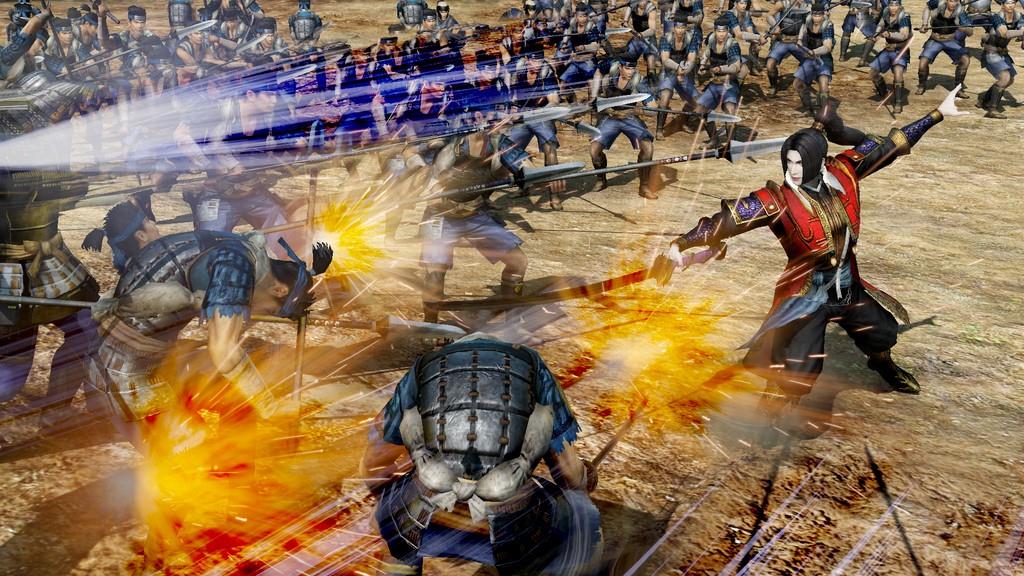 With so many enemies on screen at once, it's easy to be impressed with the performance of the PlayStation 4 version. The game runs fast and smooth, even when it appears you're swimming upstream in a river full of enemy soldiers. On the other hand, this still looks more like a remastered PlayStation 3 game than a fully-realized next-generation title. Hopefully the next sequel will not only revamp the presentation, but also improve the game mechanics in substantial ways. I think even die-hard fans are ready for the series to evolve.

Although Samurai Warriors 4 takes a big hit when making the leap to the PS Vita, it remains the same game. The character models and level designs still look good on the small screen, but it's clear from the get-go that the developers had to limit the amount of enemies that show up at any given time. Armies will pop up out of the blue as you run through the stage, only allowing for a few dozen baddies on screen at once. This is much lower than the PlayStation 4 version, which seemingly has hundreds looking to take down our hero. The story still plays out the same way, even if the battles don't seem nearly as epic on the Vita.

I'm not sure if any of this is a step forward or a step back for the Samurai Warriors series, but I do know that I had a lot of fun kicking 16th century butt. The Story Mode is fun both solo and with a friend, and I can see myself spending a lot of time collecting everything in the Chronicle Mode. But even with so much to like, I can't shake the feeling that this franchise needs to evolve in order to stay relevant.

Samurai Warrior 4 is yet another solid entry in the long-running beat-em-up franchise. It offers a few new gameplay tweaks and a different narrative structure, but is largely the same old brawler you've seen countless times. Thankfully, the game's Chronicle Mode helps set this installment apart, making this one of the most memorable Dynasty Warriors spin-off.