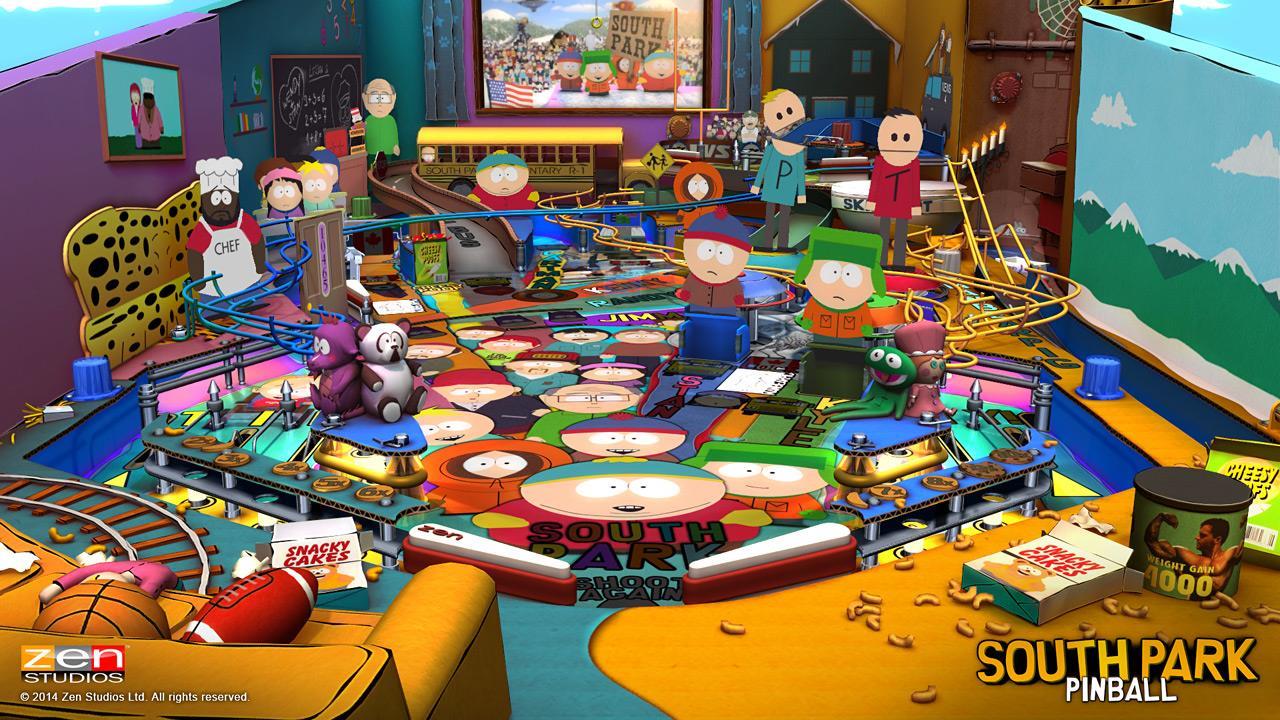 Despite nearly two decades of entertaining television viewers, South Park hasn't fared well in the video game world. We've seen one bad game after another on consoles as diverse as the Nintendo 64, PlayStation and Xbox 360. But after years of mediocrity, it appears the curse has finally been lifted. Between The Stick of Truth and Super-Sweet Pinball, things are starting to look up for Eric, Cartman, Kyle and the rest of the South Park gang.

While nowhere near as ambitious as Obsidian's role-playing game, this brand new Zen Pinball 2 pack does a good job of capturing the sense of humor and fun of the Comedy Central series. The download includes two unique tables that pull from 17 seasons of animated lunacy, making this a must-own collection for anybody who loves both pinball and the works of Trey Parker and Matt Stone.

Of the two tables in this pack, it's South Park's Super-Sweet Pinball that will likely get the most play. This colorful table has players interacting with the four friends and navigating their way around the many colorful characters that make this Colorado town so unique. You'll go head-to-head with Bat Dad, run around the football field, get probed by aliens, consult Chef for some much-needed advice, uncover the mystery of the Manbearpig, ride the school bus and even bounce into a toilet.

Like many of the Zen Pinball 2 tables, Super-Sweet Pinball is a little overwhelming at first. There are so many characters and small details packed throughout the board, and keeping track of every objective can be a little tricky. But even with so much going on, I found it incredibly easy to rack up big points. The design may be busy, but the table construction is fairly standard and there are a few simple looks that can be exploited for high scores.

The other table is Butters' Very Own Pinball Game, a deceptively simple board with the goal of unlocking Imaginationland. The whole thing takes place on the set of The Butters Show, and sees the rest of the South Park gang in only supporting roles. The missions involve Butters dressing up like a girl, turning into a vampire and smuggle Mexicans across the border. Although not as flashy, I found this had a more satisfying layout.

After a number of humorless packs (including The Walking Dead and Super League Football), it's nice to see tables that can make me laugh. That said, South Park: Super-Sweet Pinball suffers from many of the same problems that plagued other Zen Pinball 2 packs, including an overreliance on using the same sound samples. Many of the jokes are funny the first few times, but it didn't take long before I stopped paying attention to the South Park elements and focused on the pinball.

Compared to some of the more ambitious Marvel and Star Wars tables, this South Park collection feels like it comes up short. The two boards may be overflowing with colorful characters, but I couldn't get over the feeling they were holding something back. While they are a fun diversion, I'm not sure this is a pack I'll come back to months down the road.

Fans of the show will certainly love the jokes and cameos, but I'm dubious that pinball fans without a love of South Park will warm up to the referential sense of humor. The game's jokes come in the form of quick sound bites that often feel forced. They're funny if you've seen the episodes and know the situations, but don't always stand out on their own. Your level of enjoyment may come down to how much you like the long-running TV show.

As somebody who largely enjoys the work of Trey Parker and Matt Stone, I found South Park: Super-Sweet Pinball to be a charming recreation of the popular cartoon. I wish it was a bit more ambitious, but this is good first step in what I hope becomes a series of tables. Fans of South Park will love all the cameos and inside jokes, while everybody else may want to wait for the next Marvel pack.

While not as ambitious as recent Marvel or Star Wars tables, South Park: Super-Sweet Pinball is a solid collection with a great sense of humor. The two tables are radically different and the objectives are a lot of fun to complete. Fans of the long-running TV series will get a kick out of the cameos and inside jokes, but everybody else will be left scratching their heads.