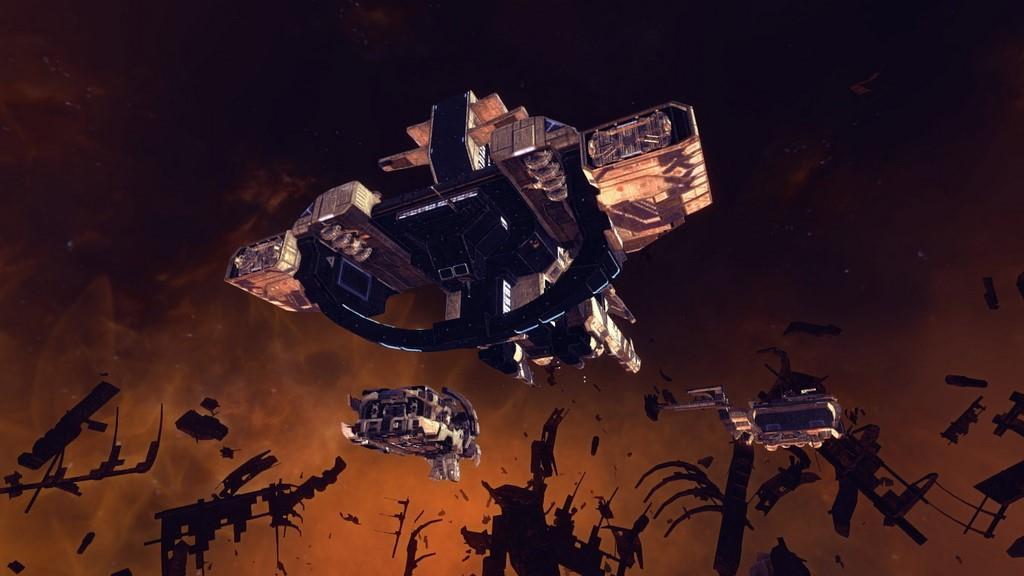 “Ancient Space” (AS) is a space-based real-time strategy game by Creative Forge Games S.A.  One would hope that the “S.A.” stood for “Super Awesome”, but this does not appear to be the case.

AS is, at heart, an old-school RTS in the “Command and Conquer” vein.  The (single) player is led through a series of missions of increasing difficulty as their units become more powerful, their resources more plentiful, and more is at stake.  Throw in a story/mystery and you have the basics of a solid RTS.

Things start out well for AS.  The first thing that stands out is the graphics.  This is a good-looking game.  Given its outer space setting, there are a lot of asteroids, space stations, nebulae, and all sorts of eye candy for the player to gawk at.  Combat looks good, too, with colorful lasers and explosions all over the place.  Even the unit information displays look good, even if they can get in the way sometimes.  It can be difficult at times to focus on the actual combat instead of looking at the scenery.

The control scheme helps.  Many times games set in outer space end up with difficult controls.  There is something about translating the control of movement in three dimensions into a keyboard+mouse+monitor combination that just seems inherently difficult.  AS does a good job of laying out the controls.  Especially in a real-time game, the ability to fluidly control your units is critical.  When real-time controls will not suffice there is always the ability to pause the game and give orders.  This is imperative at many points in the game.  Although the unit count in any battle is limited, it is still high enough, and space is big enough, that you will need to pause early and often.

Which brings us to the first (and biggest) flaw in “Ancient Space”.  It is heavy on the micromanagement.  The first thing to manage is unit types.  The basic mechanic is rock-paper-scissors: each of your units is effective against only a subset of the enemy's units (Small, Medium, Large, etc.) and completely worthless against the rest.  It is important to send units after only those types of enemies that they are effective against – otherwise it is basically a suicide mission.  In-game graphics let you know which units will be effective, which is handy, but does not keep you from having to click around to figure out what to do next. 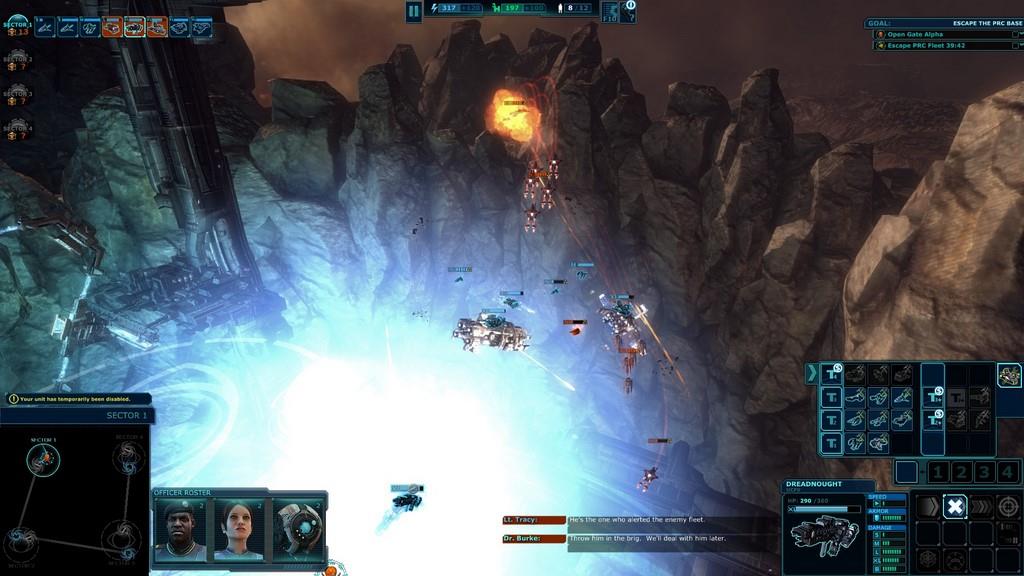 It is important to know what to do next as unit limits are tight.  This is not a game where you will overwhelm the opponent with numbers.  On the up side, this eliminates the boring “build a bunch of ships and rush them” strategy.  On the down side, it means you have to make sure that every unit you have is actively engaged in battle at all times.  Not only is this a micromanagement nightmare (you have to check often to make sure you do not have any ships loafing around) but it reduces the scope for tactics that require some units to be held in reserve: e.g. flanking, ambushes.

Ships can have captains, who provide your side with special abilities.  This can add some variety to the fleet, and adds some depth (or at least variety).  Ships can also be upgraded, which adds to the strategy.  It is important to remember what abilities and upgrades you have available, as they can make a real difference in battle.

There is a strategic level, also, in which you have to capture resource-generation locations.  These locations require you to build a space station in order to harvest their resource, and allow for the construction of defenses for protection.  In the big picture these did not do much for me.  If you grab them when they are available, and protect them adequately, there always seems to be enough energy and Tritium to go around.  This is primarily a game about tactical space combat – one feels that the strategic level was bolted-on rather than developed.  Perhaps the next version will do something with it. 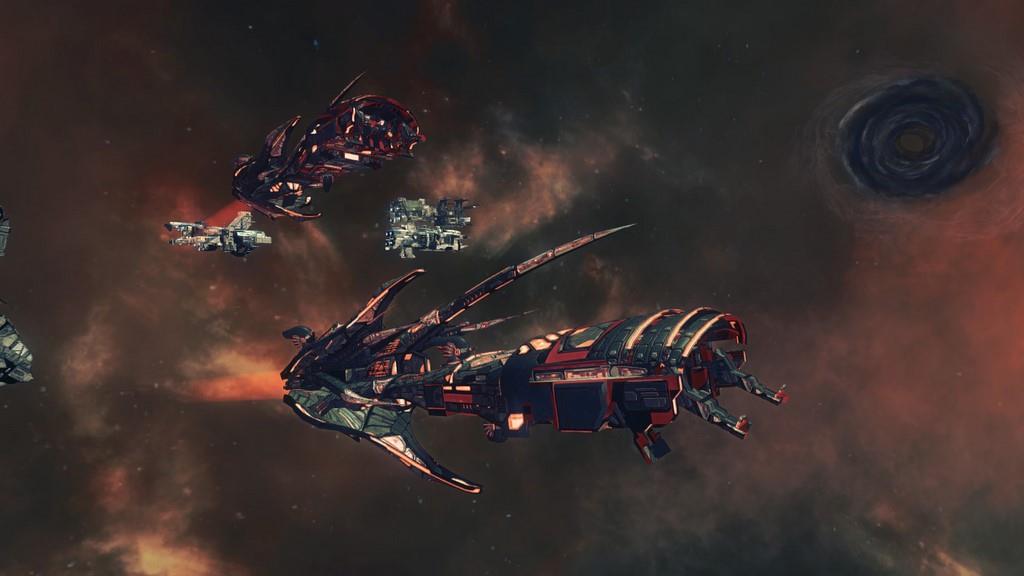 Driving the series of missions is a story that revolves around finding out what happened to a fleet that went missing a few years ago.  At least I think so.  It gets kind of complicated.  The voice acting was good, with some big names lending their tonsils: Ron Glass, Dina Meyer, Jason Billingsley, and more.  It is mostly relayed captains-log style, as voiceovers between missions, so other than everybody dying there is no real opportunity to engage with the story.  Your mileage may vary on this aspect of the game.  This reviewer found it moderately amusing – no “Thief” or “Bioshock”, but better than just on mission after another.

The missions themselves are wildly inconsistent.  While there are some well-designed, right-down-to-the-end missions, there are plenty that are too easy (not many) or too hard (most).  It could be that the hardest missions are that way only if you lose patience with the micromanagement required.  It is easy to get into a rut of playing each missions at least three times.  First, just to see what the setup is.  You will get killed, but consider it recon.  The second mission is an attempt to win, without an expectation of doing so.  Oddly enough, winning at this stage can feel vaguely disappointing.  The third (and fourth, fifth, and so on) attempt is where the micromanagement really kicks.  There will be frequent pausing, cursing of bad luck, and multi-angle studies of the battlefield as you try to figure out what went wrong this time.  In the end you can be left wondering whether it was worth all that work.

In summary, “Ancient Space” is your standard old-school RTS.  There is nothing that original in it - units, resources, missions, rock-paper-scissors – all by-the-book.  The difficulty level is high, as is the micromanagement level.  It looks good and plays smoothly, but in the end this is not enough to raise it from the ranks of the merely average.

A standard space-based RTS.  Short, but also cheap, worth picking up if you are a fan of the genre or are just itching for some old-school RTS action.  Otherwise, you won't miss anything.