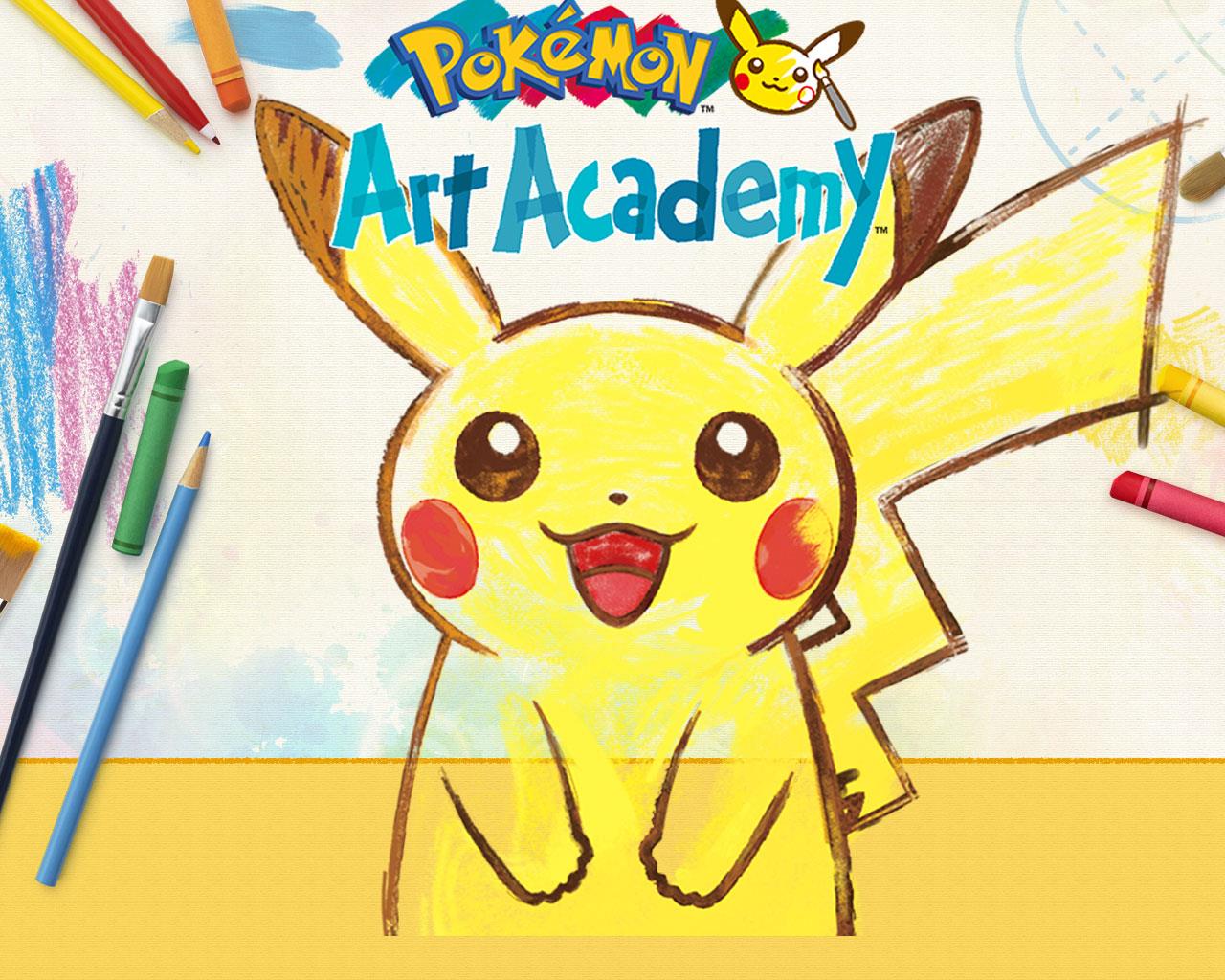 About two and a half years ago I reviewed a “game” called Colors 3D which basically let you use its tools to draw whatever you wanted.  I gave the game high praise as even though you basically only had a brush, it was called “Colors” 3D, so the main objective was to paint and color what you wanted.  I may have rated it too high now that I look back on it, but you can still achieve some amazing results with it for those skilled enough.  However, I feel it’s time to step up my game a bit and go beyond just using a paintbrush.  Today I’ll be enrolling in the Pokemon Art Academy to see if I can take my skills to the next level…which shouldn’t be too hard given the only Pokemon I can draw are those shaped like a basic circle.

When you begin the game you enroll in the academy with your friend Lily who’ll be attending your lessons with you (though aside from occasional dialogue and some hilarious drawings this is inconsequential).  As you begin your time at the academy you’ll begin with the basics by drawing a Pokemon’s face.  From there you’ll move through three sets of courses, each ending with a graduation course, as you learn new techniques.  You’ll start off with drawing simple borders and using markers and eventually work your way up to pencil sketches, shading techniques, and color smudging to give your pictures different effects and looks.

After the starter exercise you’ll have the Novice Course, then Apprentice Course, and finally the Graduate Course, each course with three to four lessons.  Each lesson will have two to four Pokemon to draw, but only the first one available to you is required to complete to progress the game.  Once that first one is finished, the rest in that lesson become available to you.  After completing all of the lessons of a particular course, your final challenge is to draw Pikachu using all of the techniques you’ve learned thus far with more emphasis on the ones you’ve learned in that course.

The tools themselves range from border pens to markers to smudge sticks and several things in between.  You also have a wide variety of colors to choose from as well as different opacities for shading.  However, you shouldn’t be too overwhelmed the first time you play as the professor will walk you through everything you need to do in each lesson, including highlighting which tools and colors you’ll need, so you won’t have to worry about going through a large color palate to find that one weird color as it’ll already be prepared for you.

As you finish each lesson you can save your image as it’s shown on a sample Pokemon TCG card.  You’ll also see an occasional example of a drawing on a real TCG card which is an interesting touch thrown in.  However, it’s easy to be intimidated by the excellent drawings in the game, especially once you hit the Graduate course and see the impressive Charizard.  However, it is possible to…well, cheat, so to speak.  If you’re like me and don’t have an artistic bone in your body, you can actually swap between three different types of canvases: a blank canvas, one that shows a few simple colored shapes used mostly for pencil sketches, and a full outline of your subject.  Most of the time I ended up using the full outline, even in the later courses, for some of the beginning work on a drawing, but slowly began to wean myself off of that and use the sketch canvas. 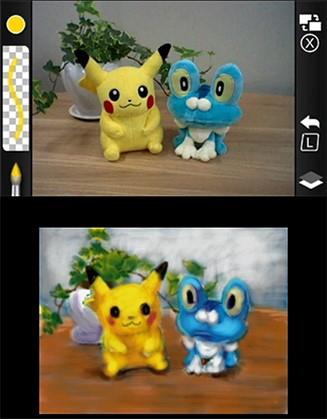 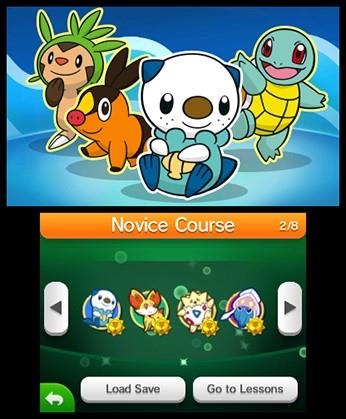 Once you’ve finished the lessons there’s still a bit more you can do.  Aside from retaking any of the lessons anytime you wish, there are two other modes of play: Free Paint and Quick Sketch.  Quick Sketch is pretty much that; you choose a subject and have to sketch it step by step, but your tools are already chosen for each step.  The Pokemon themselves are rather simple to draw, such as Oddish or Ditto, so these sketches can be completed in less than five minutes.

The bulk of the extra drawings are in the Free Paint mode, which is the exact opposite of Quick Sketch.  Here you can choose from basically any drawing you’ve already completed and you have every tool and color at your disposal.  It’s essentially as if you’re doing it in Lesson Mode, but without the professor telling you how everything is done.  There’s an option to download images online (which at this time there’s only one to download which is a couple of Halloween-themed Pokemon) as well as an option to use your own images, but there’s a small caveat to this option.  Since it’s a custom image not in the game, the only canvases you can use are the blank canvas and a new canvas in Free Paint mode that’s basically a grid.  This can make it a bit tough to draw what you see on the upper screen, but also makes for a nice challenge and test of your skills.  If you’re really up for a challenge, you can choose no subject at all and draw whatever you wish.

There are a couple of issues I have with this game.  First off, when doing some of the later lessons, mainly when doing the pencil sketch portion of a drawing, it can be hard to see what the Professor drew on his picture.  This is because the background for each lesson is a different color…but none of them are white.  In fact, quite a few are dark colors making it harder to see dark-colored pencil lines.  This is one of the reasons why I constantly used the “border canvas” for the earlier parts of a drawing as I just couldn’t make out where to use the pencils. 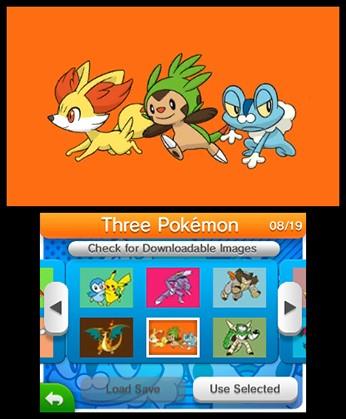 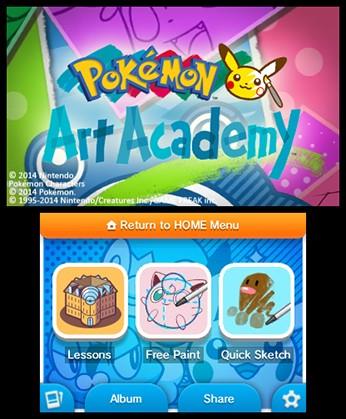 Second, while the professor will show you in each lesson how to do something, he’ll only show it once.  Granted you can skip past it, as I did for the most part, but let’s say you suddenly get stumped on how he did something.  Well…you’re out of luck.  Aside from quitting the lesson and starting from scratch, you can’t re-watch the “tutorial” for that part of the lesson.  I hit this road block on a later lesson with Lapras and while I eventually figured out what went wrong, it would have been nice to re-watch that example again.  Thankfully though if you miss something or make a mistake and don’t catch it until a couple of steps later, you can still fix the issue by selecting the tools you need or just hit R to undo what you previously did.

Finally, and probably my biggest issue: the severe lack of Pokemon to draw.  There are 700+ Pokemon in the series now and there are less seventy images to draw.  Something to keep in mind is that once you draw something in Quick Sketch, it will become available in Free Draw.  This goes for the Lesson Mode pictures as well.  However, I was still expecting a lot more.  Heck, all three graduation images are of Pikachu, who’s also one of the Starter Exercise Pokemon.  Again you can use any image in Free Paint that happens to be on your SD card, Pokemon-related or not, but I’m hoping that DLC images will help fix this issue down the road.

Overall, Pokemon Art Academy is a fun game, but it’s not without its flaws.  Sadly you aren’t graded on your work (which is a good thing for your friend Lily who’s somewhat horrible at most pictures she draws), which means aside from the personal satisfaction of wanting to improve there might not be much of a reason to revisit old pictures.  Also, as already stated, the lack of actual subject matter can also be a bit of a turn-off people like me who like a lot of the not-as-popular Pokemon such as Scyther, Beedrill, and Magmar.  Hopefully though that will be fixed with DLC images in the future.  In the end, Pokemon fans should enjoy drawing some of their favorites for themselves and see how they’d look on an actual TCG card, and would-be artists might also enjoy this one as well.

Pokemon Art Academy is a fun “game”, no doubt about it.  Even though I did feel my artistic abilities improved a bit, it would have been nice to get graded on my drawings to get some actual feedback on my skills and progress.  The lack of Pokemon to draw can also be a bit of a turn-off for some, but the Free Paint mode’s ability to use a blank canvas or any picture on your SD card can help alleviate that a bit.