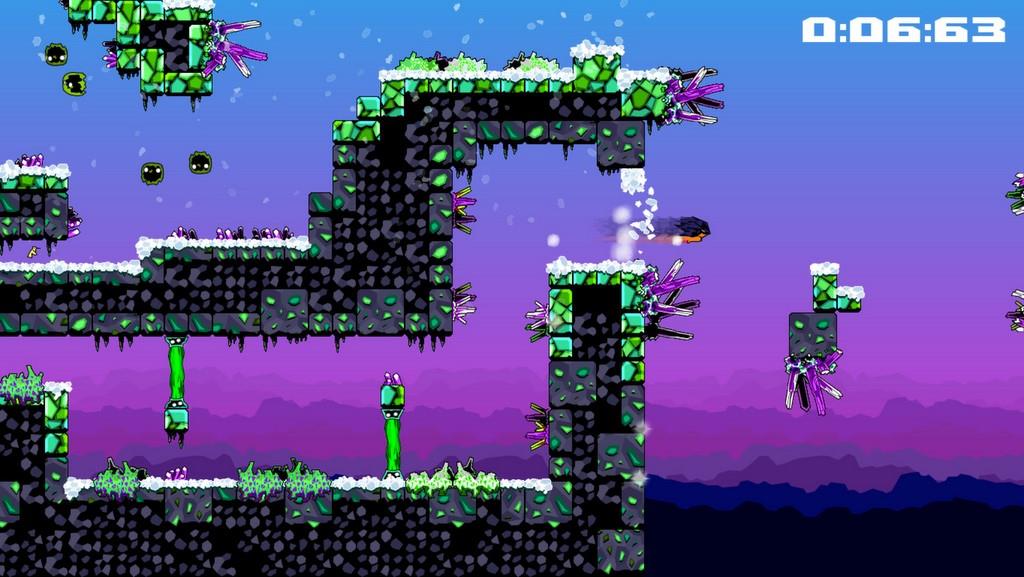 If you’re a fan of indie games, then you’ve no doubt played Super Meat Boy at some point.  It’s a fun little game where every wrong move will kill you as your main goal is to just get from point A to point B without getting killed.  Super Meat Boy is just one of many retro-styled games that pushes players’ skills (and sometimes their patience) to the limits.  Fenix Rage is another.  However, is Fenix Rage worthy of joining the ranks of those other hardcore retro-styled games, or is it just a clone of Super Meat Boy trying to cash in on its success?  Let’s take a look and see if I can get through this with my hair still intact.

It’s hard to describe the story of Fenix Rage without looking it up on Steam.  According to Steam, you are one of the last two members of your village after it was taken down by an explosion, the other being someone named Oktarus.  As Fenix you must now track down Oktarus while defeating several bosses and many minions that stand in your way.  That’s…really all there is to the story, at least in writing…but I’ll get to that in a moment.

The game has nine worlds with about twenty levels in each.  As soon as you start out you’ll see why I brought up Super Meat Boy at the start of this review as outside of how Fenix controls, this game plays very much like that of the square hamburger.  Each stage is simply getting from point A to point B while avoiding enemies where one hit will kill you. Unlike Meat Boy however, you have the ability to jump as many times as you want in the air as well as dash as much as you want, including in the air.  Each stage also has a cookie to grab and collecting all twenty cookies in each world will get you…and actual cookie recipe.  I’m not joking, though I have yet to try any out as of the time of this review so sadly I can’t factor that into it.

Each world brings something new to the game in terms of mechanics to constantly switch things up.  While the first world is just basic point A to point B gameplay, the second world introduces colored beams that will teleport you to another beam of the same color, the third world lets you absorb fireballs to immediately set yourself on fire to break ice blocks, and so on.  They start out tame enough, but later levels will introduce new enemy types such as those that will home in on you when you get too close to them.

The twentieth stage in each world contains a boss which you must defeat in a unique way.  For instance, the first boss is basically a race to the end of the stage while taking some twists and turns to get there.  As long as you keep a fast pace you’ll be fine, but a couple of slip ups will basically get you killed rather quickly.  The third stage boss has you avoiding its projectiles while you lead those same projectiles towards ice blocks to clear a path for you.  It gets especially annoying during the final phases of the fight as the projectiles increase in speed making it harder to avoid them.

If you get tired of the main game there are several “arcade games” to unlock.  To unlock a game you must spend a certain number of stars, which are acquired whenever you beat the game’s best time on a stage.  The games don’t seem too bad, the one I unlocked basically has you collecting cookies while avoiding enemies.  They’re simple, but a nice time waster and a breather after some of the hazards you’ll encounter in the main game.

So as a game inspired by Super Meat Boy, Fenix Rage looks pretty good, right?  Well it does…but there are a few things that kind of make me tilt my head a bit.  I’ve played games that were inspired by other mainstream games.  If you recall my article a while back about Echoes of Eridu, I wrote that the game was inspired by the Mega Man games (specifically Mega Man X).  While Echoes of Eridu (now called 20XX since the beta was released) was inspired by Mega Man X, there are still plenty of differences to it.  Fenix Rage may have been inspired by Super Meat Boy, but after playing it for several hours, I had to look to make sure the two games weren’t created by the same team, because outside of how it looks, I would almost say that Fenix Rage is to Super Meat Boy as Mega Man: Star Force is to Mega Man: Battle Network; very similar with different character mechanics and story.

Let me clarify that last statement for those who aren’t familiar with the Battle Network and Star Force games.  The two games have different stories and a few different mechanics, but if you’ve played Battle Network, you’ll feel right at home with Star Force as they effective play the same way.  Likewise, there are a ton of similarities between Fenix Rage and Super Meat Boy.  Fenix Rage starts off each world and boss encounter with a similar styled cut scene, each has a bonus item to collect (bandages in SMB and cookies in Fenix Rage), each game kills you in one hit, and each has bonus stages to unlock and play through.  This isn’t necessarily a bad thing on its own,  but it’s not a perfect thing either. 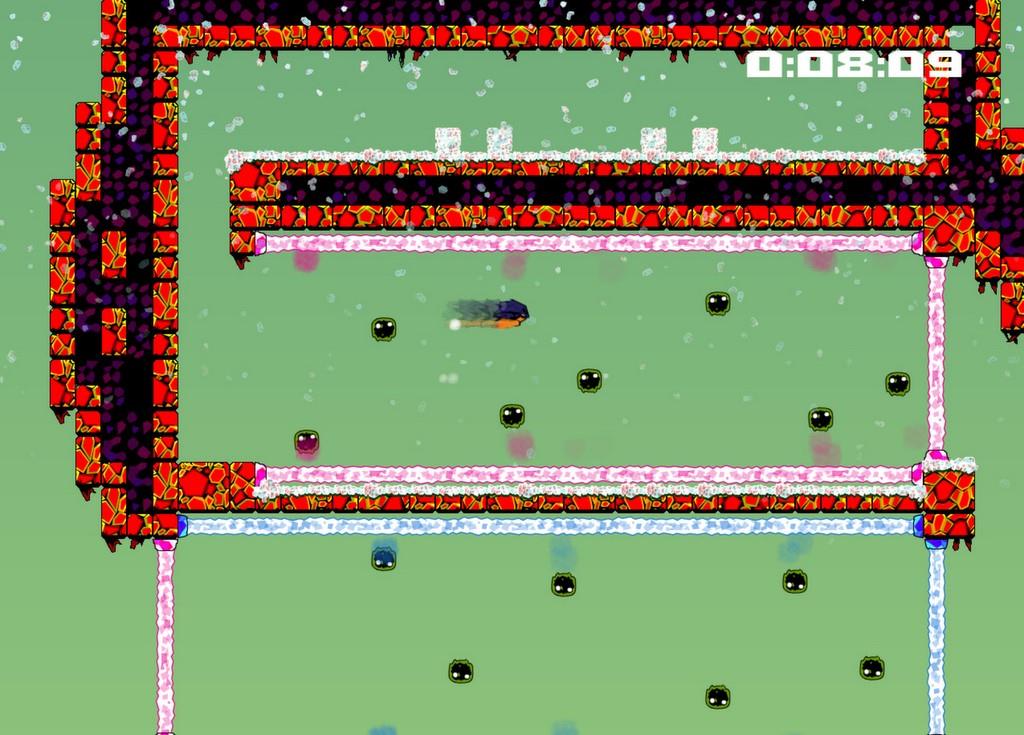 For one, I wouldn’t say this game has a difficulty curve as much as a difficulty sine wave.  The first couple of stages in each world are definitely easier than the rest, which makes sense.  It gives you time to try out the new mechanics of that world.  However, there were times where I was working on a stage in the middle of a world for what seemed like a good twenty minutes or more, dying way more than any previous stage, but then the very next stage I easily cleared in ten seconds.  That wasn’t by luck either, the stage really wasn’t that difficult to clear.  I can understand easier worlds starting off easy and then naturally progressing in difficulty, but when you spend half an hour on one stage and ten seconds on the next, it can get a tad discouraging.

The other thing worth mentioning is the dying.  It will happen…a lot.  That’s to be expected with these kinds of games, but here there are two caveats.  The first is that respawning happens instantly.  In other words, if I’m mashing B to dash through an area and accidentally hit an enemy, I may respawn and accidentally dash myself right into another obstacle.  While deaths may not mean much in the grand scheme of things, it’s still annoying to see yourself die several times because you were just trying to rapidly dash through an area. 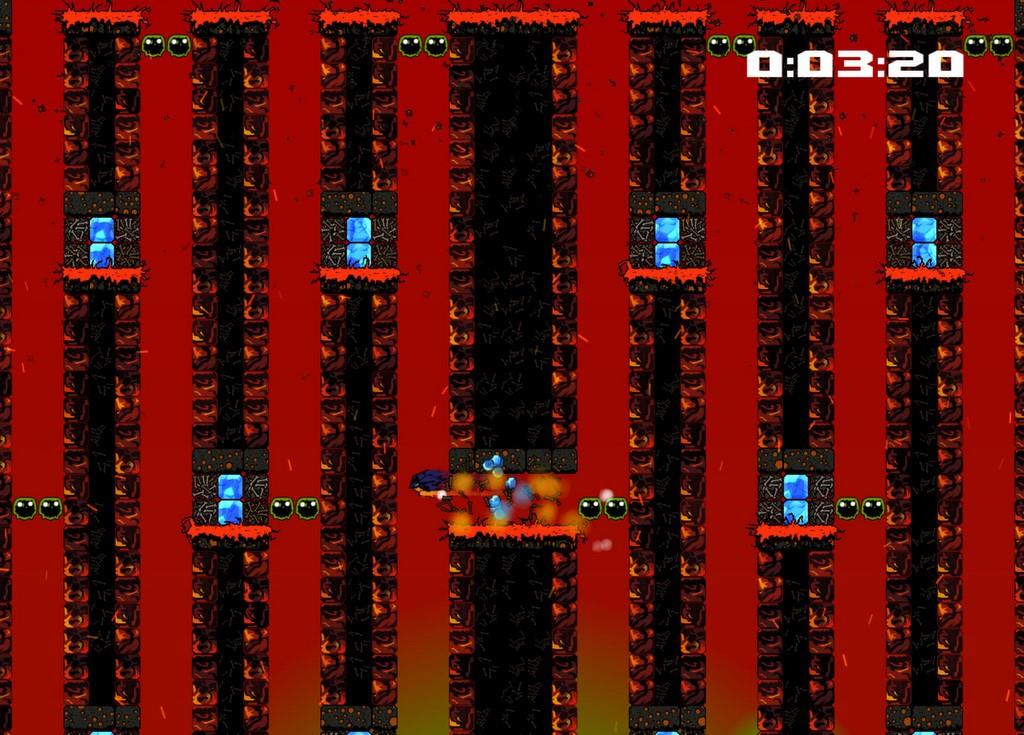 The other annoyance with dying is that the stage doesn’t reset itself.  Going back to Super Meat Boy again, whenever you died the stage reset itself for you to try again.  Here though the enemies just keep going as if nothing happened.  This is really only a minor complaint compared to the difficulty sine wave, but I’ve found myself disoriented several times trying to get back into the rhythm of the enemies movements after dying.

When it comes down to it, I did somewhat enjoy Fenix Rage, but the more I played it the more it not only reminded me of Super Meat Boy, but made me want to go back and play it again.  That’s not to say that Fenix Rage is a bad game, as it’s not.  Just keep the second half of the title in mind when playing; Rage.  Some of the stages can be downright brutal, but the very next is a piece of cake.  These kinds of games seem to prey on frustration, and the more frustrated you get the more mistakes you make, myself included.  Once I stepped back for a bit and came back to the game I found myself clearing areas a bit easier, but a few minutes later I’d find another stage that almost made me rage.  If you like Super Meat Boy, you’ll probably like Fenix Rage as it’s pretty much the latter cranked up a bit.  If you’re the kind of gamer that gets frustrated easily to the point you have a “Spare Controller Fund” setup, you might want to play the demo first.

Fenix Rage is a pretty good game, but can also be a frustrating experience.  If you don’t mind the fact that it could almost pass for a sequel to Super Meat Boy and that the difficulty curve is all over the place and can easily make you frustrated, it is an enjoyable experience.  If any game needs Nintendo’s reminder to take a break now and then, this would be the one.