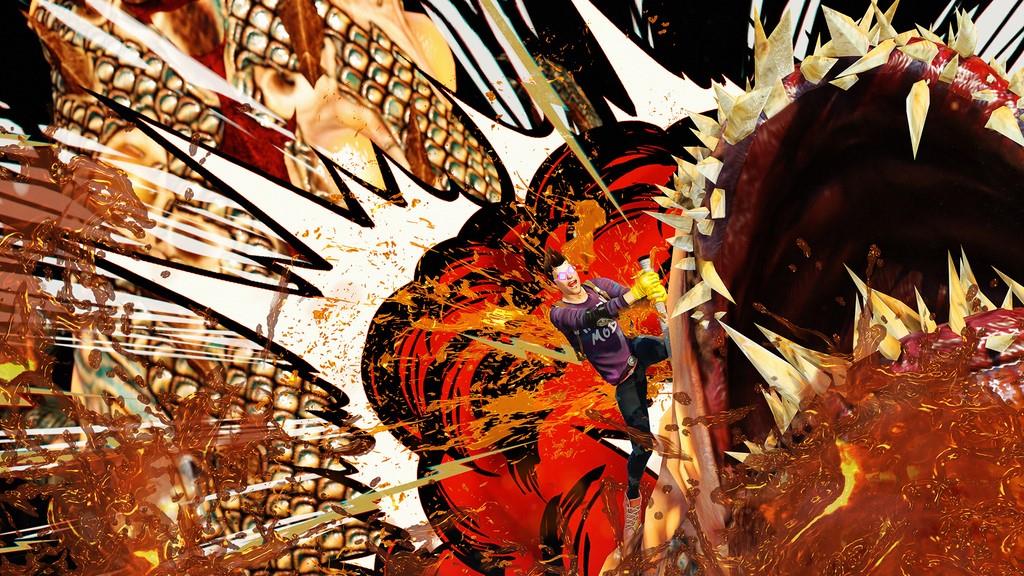 By now, I am sure that most of you reading this have some sort of clue as to who Insomniac Games is when you hear the name. The mere mention of the studio's name makes you think of Ratchet & Clank, Resistance, Spyro the Dragon, and maybe even the PlayStation brand. This is that same Insomniac, but this isn't PlayStation. This is the Xbox One. Sunset Overdrive, their latest creation, is exclusive to Microsoft's new system and while it might be available on a different platform than Insomniac fans are used to, it is definitely a patented Insomniac experience from beginning to end.

The Fizzco Corporation is ready to launch their new energy drink across the world, beginning with a huge "launch" party in Sunset City. There is a little problem though: the research and development department forgot to mention that the drink turns those who consume it into raging mutants hellbent on destruction (isn't that what energy drinks are supposed to do?). The product launch goes just as you would expect and the city soon falls into chaos as the mutants take over. The resulting apocalypse-esque situation leaves Sunset City in chaos and the survivor's fighting to stay alive.

If it sounds crazy it is because it is; every aspect of this game is completely insane and it is supposed to be. Think of it as one of those incredibly bad action/horror movies like Attack of the Killer Tomatoes or Sharknado. I am not going to spoil any more of the story for you than the developers already have, because a) you wouldn't believe half of the plot points if I told you and b) I don't  want to ruin the fun of experiencing them for yourself. Don't expect anything your going to see or do to make sense, teach you a moral lesson, or give you hope for a better tomorrow. The goal here is to take you on a breakneck ride filled with action and crude humor, and it does that pretty much every step of the way.

As funny and enjoyable as the adventure is, it is the gameplay department where Insomniac truly knocked it out of the park. It is clear that they have taken everything that they learned from their marquee franchises and applied it here. The weapon system feels like it is ripped right from Ratchet & Clank. You have the patented R&C weapon wheel, complete with total customization and ease of use, along with a leveling system that rewards you for using the various weapons. Of course, things have been improved to thanks to the amp and overdrive systems which alter your arsenal even more. The result is customized collection tweaked and modified to suit your desired play style. 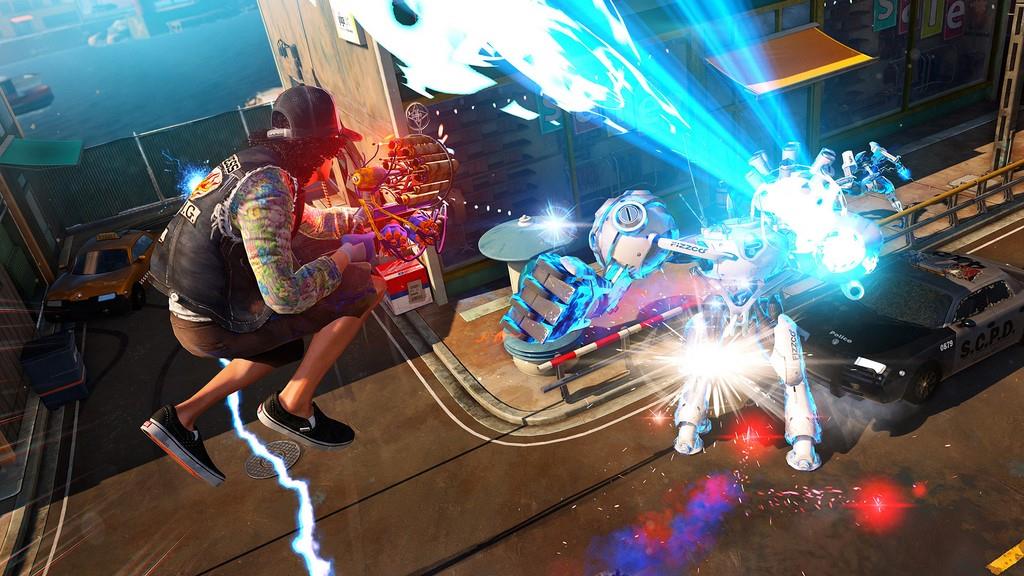 If you aren't content with a rocket launcher that shoots explosive teddy bears or a minigun firing roman candles, why not add freeze capabilities to one, and perhaps electricity to the other. You will get a chance to make modifications like this at will, once obtain the ability which happens pretty early on in the game. The key to expanding and altering your weapons and abilities lies in finding the games huge portfolio of collectibles and missions. As you collect things like toilet paper and destroy security cameras you can trade them in for additional amps and overdrives which is what you need to modify things. You are seemingly always gaining access to new and better ones every step of the way through the story and even afterwards.

Guns aren't the the sole focus of Sunset Overdrive though, they share the limelight with traversing the gameplay world. Sunset City, which is incredibly massive, is intricately designed and nearly everything in the city can be interacted with. As impressive of a feat of design that aspect is, it is event more impressive to experience the level of ease that it takes  to maneuver around it. The movement / traversal system relies mainly on two buttons, X and A. One jumps and vaults you off of and between objects, the other interacts, triggering a wall run or a grind among others. It is a simple concept and one that will become second nature very quickly. If I were going to describe the feeling of the freerunning aspect it is something like a mix of Jet Set Radio and Tony Hawk's Pro Skater. The big difference here is that EVERYTHING in the game world comes into play.

The main reason they have made it so simple for you to move around everywhere (literally) so easily is because you need to be able to do it constantly while battling your enemies, be it mutants, other survivors, or Fizzco's various security forces. It boils down to you basically running around the apocalypse and running wild without any sort of limitation; well there are those pesky invisible walls, which are literally labeled as a such that will keep you within the city limits. Your supposed to do it all with style, and actually rewarded for doing so.the better you maneuver around and kill bad guys with variety, the higher your style meter gets and the more powerful your amps become.

Insomniac does a good job at mixing things up along the way as there are quite a few alterations made to the formula along the way to keep things fresh. You will have your share of escort missions, base defense, and even some flying and boating sequences, which all break up the monotony a bit. Granted, they aren't all created equally and a few can be tedious (I'm staring at you flying mission), but they definitely keep you from getting bored of doing the same thing over and over.

All of the story's same insanity and chaos carries over to the multiplayer mode, which is called Chaos Squad. It literally carries over as all of your progress is shared between the two modes. You have access only to what you have earned and leveled in terms of weapons, amps, and overdrives regardless of which mode you are playing. You can think of  Chaos Squad as a rag-tag group of eight friends running amuck in the apocalypse. You and your group are given a series of modified story missions, spread all over the city, which culminate in a base-defense style night mission. These missions promote both competitive and cooperative play as you are all working towards the same goals but scored individually for bragging (and reward) rights. It is a really fun way to hang out with friends in the game world and gives purpose to the free roaming aspect of the game. 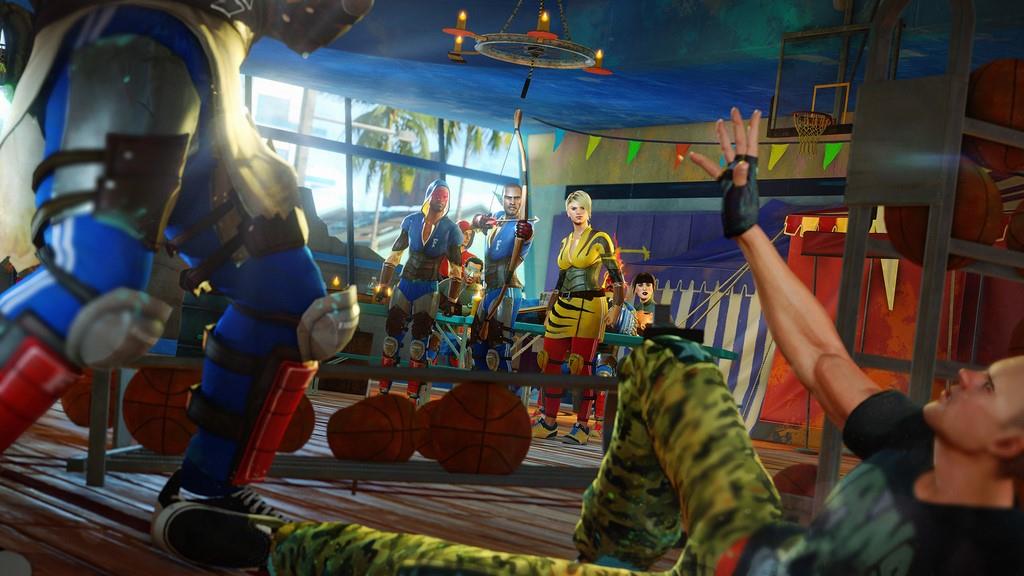 Perhaps my biggest issue with the game is just how over the top things can be. There are a couple of times went it felt like things were just getting too crude and insane; it wasn't adding to the game's off-the-wall feel and felt more like it was being done just because it could. There are a couple of sections of the game too that felt like they were drawn out a little too long. You'll meet variety of factions and groups along the way and while most made for fun times , one or two could have been left out and the experience would have been just as enjoyable (maybe even a little more).

For a while, I thought this was going to be a game that I completed and put back on the shelf. In the end, it has become the one I find myself going back to time and time again just to get another taste of the action. The gameplay mechanics are just so spot on that you can't help but enjoy yourself even if you are just cruising around the city. Luckily, between the hundreds of collectibles, tons of challenges with leaderboards, and enjoyable multiplayer, you will always have more to do than just that. This is the most fun that I have had on the Xbox One to date.

Despite hitting a few speed bumps along the way, Sunset Overdrive's excellent and addictive gameplay are what stands out from the experience. It make take this gs a little while to get rolling but once the game hits its stride,you're in for one hell of a ride.