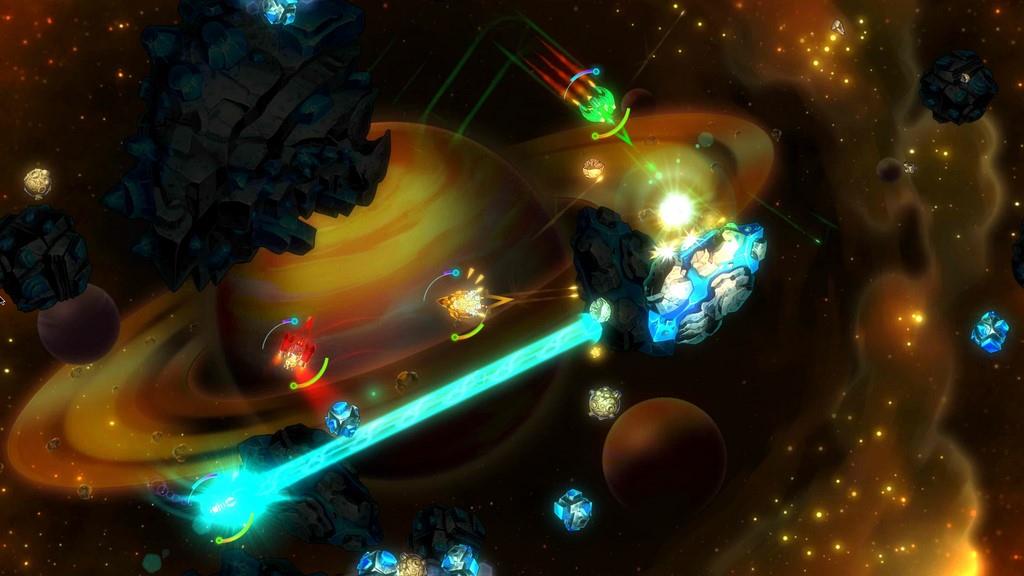 In Space We Brawl

In Space We Brawl is Geometry Wars with four-player couch co-op.

Ahem, Gaming Nexus Robot Lord in Chief, The Benevolent C1 Xerxes 9000, has informed me that videogame reviews cannot be one sentence long, so let’s pop some popcorn, pour ourselves a delightful beverage and find out what else we can say about a game that really can be summed up perfectly and completely in one sentence.

Graphically, it’s what I want to see from these kinds of small, downloadable current-gen games. If you’re not going to push visuals there’s no reason for a game like this not to be a free app on the Apple Store or Google Play.

Where it doesn’t hold up to Geometry Wars is in its pace and sluggish controls and that is In Space We Brawl’s real failing. It’s slow. Even when boosting, your ship – of which there are many unique ones to unlock and use with a wide variety of weapons – moves far too slow for the game to approach anything resembling fun.

You can partake in this slow gameplay in both four-player couch co-op (sorry, no online multiplayer) and singleplayer challenges. The challenges amount to training and a “campaign” which is just you being swarmed by enemies while “characters” spout text non-sense and threats at you. Since you can’t play the game and read this dialogue, In Space We Brawl is constantly pausing the action. I found it all a very strange way to design even the singleplayer portion of a Geometry Wars-style twin stick shooter.

In multiplayer, there are two modes: Tournament and Championship. In Tournament, you and your three buddies brawl for a specific number of matches in a four-player free-for-all or you can team up in pairs. Championship is exactly the same except the players compete to a target score.

Unfortunately, no matter what mode you play it in, the ships are so slow and move so sluggishly that it inhibits the actual fun you can have. Also each ship’s shield and boost, which draw from a constantly recharging energy pool, activate a beat too slow and that further diminishes the quality of the gameplay.

The truth is that, no matter how many words I try to put into it, nothing sums up In Space We Brawl better than my original point: it’s a worse version of Geometry Wars with four-player couch co-op as the focal point.

If you loved Geometry Wars and you’ve got three buddies looking for some couch gaming action then you might want to consider In Space We Brawl, however, in my opinion, you’ll have more fun simply going back and playing Geometry Wars.