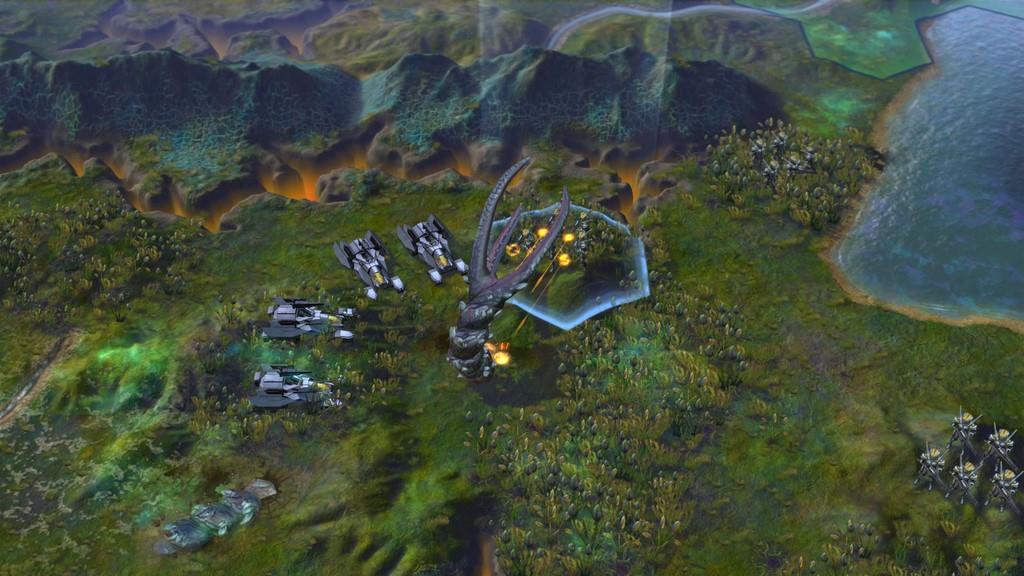 Written by Tom Bitterman on 10/23/2014 for PC
More On: Sid Meier's Civilization: Beyond Earth

In practical terms this makes CivBE a bit more science-fictiony than Civ.  The Civ technologies tend to be historical – things like “Steam Power” and “Horseback Riding”.  CivBE techs include “Exotic Matter” and “Biometallurgy”.  The planet itself looks alien, vaguely menacing, even hostile.  You clearly don't belong here.

The first sign that you are out of place is the local fauna.  It dislikes you.  Not always and everywhere, but it likes to sneak attack your most vulnerable units – settlers and workers especially.  And they are tough.  Especially at first your units will be no match for the native bugs.  And if you try to fight they get more aggressive.  Even your fellow-colonists will get mad at you if you try to wipe out the natives, despite all the damage they can do.  These are not Civ's disorganized barbarians, but a semi-cohesive opposition force.

An important coping mechanism to all this hostile strangeness is the adoption of an Affinity, a way of coming to terms with everything.  With Purity, your side decides that the best bet is to try and stay human, and make the planet conform.  In Harmony, your side decides that the best path is to adapt, even meld with the new planet.  Adopting Supremacy means doubling down on tech to save the day: robots, cyborgs, artificial consciousness.  Adopting an Affinity is a combination of choosing certain techs and making decisions at story points the game presents.  Affinities come in levels – the higher your level in an Affinity the more of that Affinity's benefits you reap.  Eventually one Affinity will become your primary Affinity, and your civilization will take on its characteristics.  Supremacy units look like robots, for example, while Harmony can use native beasts to fight for them.  The choice of an Affinity both helps and restricts the options a player can exercise through the game.

The tech system is new, too.  Gone is the rather-linear tech tree, in is the tech circle.  The idea is that you start in the center, with easier-to-research technologies.  As time goes on your side will be drawn to different parts of the circle.  Although loosely-defined, there is a robotics sector, an “alien biology sector”, a computer tech sector, and so on.  The further out from the center, the more difficult it is to research a tech, but overall there is more freedom on what to choose next than in the standard tech tree.  It can be a little overwhelming, but means you do not have to wade through a bunch of useless (to you) techs to get to the ones you want.

Also new is the quest system.  From time to time the game will decide you should do something, perhaps build a particular building in a certain city, or go on a particular spy mission.  Do it, and you get a bonus – maybe discover a cache of resources or make a scientific discovery.  Closely related to quests are periodic decisions that must be made.  These break down into “What do you want to use this building for?” (allows for customization of building output, perhaps more energy vs. more production) and “This event happened.  How do you react?” (perhaps some strange subsect has been found.  Do you kill them, or allow them to settle nearby?).  These elements help push the story along, and help you mold your side into a people with a history, even an Affinity.

Despite these and other mechanics, the gameplay itself will be familiar to any 4X veteran.  You start out with a single colony, try to expand by exploring and settling new territory, end up meeting other sides.  At this point trade and diplomacy take hold.  Eventually you will fight in self-defense, or for land, or victory, or just to have something to do.  The AI seems serviceable, if a bit chintzy, often turning down even deals for no good reason.  I mean, it's turn 12: why do you want 30 Energy to sign an otherwise symmetric deal for open borders?  The AI will also react to your Affinity.  Similar Affinities tend to like each other, unlike Affinities do not.  There is also the concept of a Favor.  You can, for example, trade some Titanium for a Favor.  Exactly what a Favor is worth is not clear.  AIs tend to be generous in throwing them into a deal, but it is not clear what you can get when trying to cash one in later.

CivBE is definitely a good looking game.  It looks alien, with strange fauna and improvements that keep up the sense of weirdness.  It can be a relief when terraforming technologies allow for a more Earth-like look, but even that is limited to a few tiles and can just set off the general eerieness.  Units are appropriately futuristic, with cool cyborgs and hover tanks itching for combat.  If there is a problem it could be that the textures are so rich that some important features (like roads) are hard to distinguish. 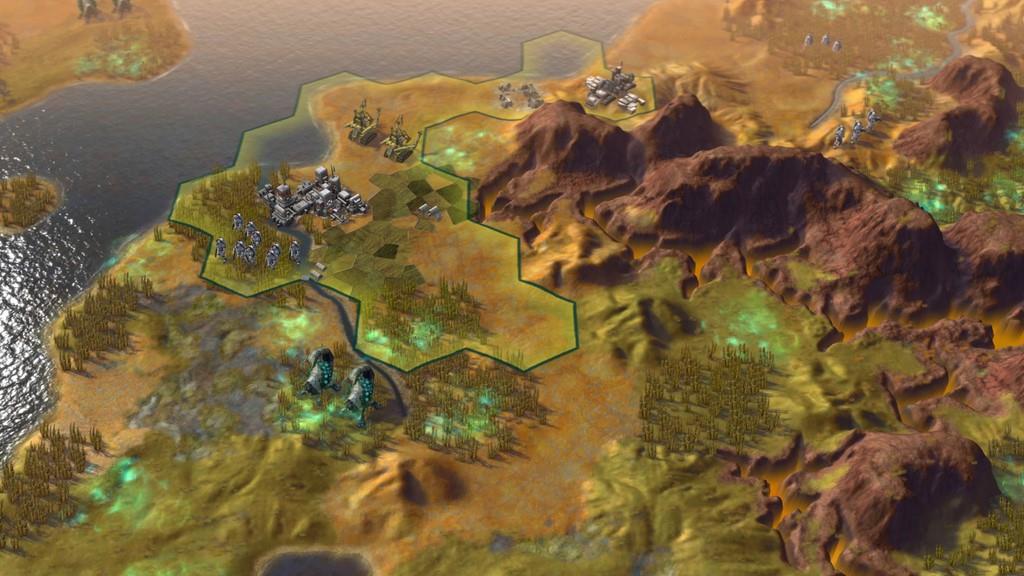 As fun as the game was to play, it was equally frustrating to end.  There are several victory conditions.  Some are clear:  Domination (kill everyone else on this planet), Emancipation (kill everyone on Earth by sending enough units back there), and Transcendence (build a Wonder and wait for a while) are straight forward enough.  But Contact and Promised Land are a mystery.  In Contact you build a beacon, activate it, and wait for friendly aliens to get in touch.  So I built the beacon, but there are no instructions on how to activate it.  Anywhere.  So I waited for while, and then won a way I could understand.  In Promised Land you build a gate back to old Earth (a real hellhole at this point) and wait for 20 colonists to come through.  So I did, and they never came, nor did I have any idea how to get them to.  Apparently the opportunity to get out of a living hell is not enough.  And then I lost, as the game does not really say much about how close the other sides are to victory.  All in all the ending was anticlimactic.

There are other bugs that impact automated play.  There seem to be a large number of conditions in which units set to explore automatically will just sit there and do nothing.  There will be unexplored territory right there, but the unit just sits around, unmoving.  Automated workers will also make stupid decisions.  I cannot count how many times I have built a worker for an isolated city, only to have it cross an ocean to build yet another improvement to a bigger town.  Automated workers also seem to gang up, often putting five or more to work on a single city simultaneously, while other cities get no love.  These bugs do not cripple play but a game this complex needs good automated tools to keep the micromanaging under control.

In summary, “Sid Meier's Civilization: Beyond Earth” is a pretty good game.  It takes the usual Civ framework and throws some new twists in, then sets it on a new, science-fictiony planet.  It is familiar enough to jump right into, but with enough new elements to stand alone, rather than being just another Civ-clone.  It is complex enough to repay repeated play but could use some more documentation, especially regarding victory conditions.

Another success in the line of Civ games.  It does a good job of setting the scene and taking the player along on a story of hope, struggle and triumph.  The ability to customize your side both before and during the game will lend itself to long debates over the “best “ strategies.  Replayability and the inevitable mods and expansions will keep this on your hard drive for a long time.