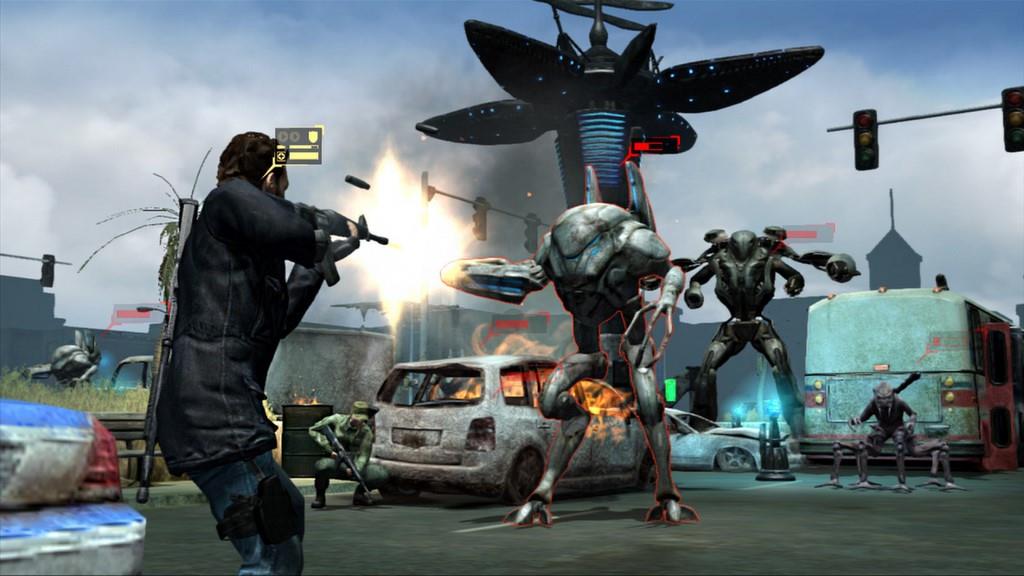 Much like their movie counterparts, games based on popular television shows have a reputation for being shallow and generic cash-in products that fail to live up to fans' expectations. It's common for a developer to slap a hot license on top of an already popular game, usually a third-person action shooter with little new to offer. Knowing this history, I went into Falling Skies: The Game expecting a derivative experience. For better or worse, this is exactly what I got. Thankfully it wasn't another run-of-the-mill third-person shooter.

Based on a moderately popular science fiction show on TNT, Falling Skies: The Game is centered around humanity's last survivors fighting back after several alien species conquer Earth. It's an intriguing enough setup that certainly sounds like it would lend itself well to a third-person action game, but the developers skirted expectations by creating a fully realized XCOM: Enemy Unknown clone.

I don't mean to suggest that this game borrows a few ideas from Firaxis' recent reboot. It's not that Falling Skies is a little similar; it's that this downloadable PlayStation 3 title is a near carbon copy of one of the best games of 2012. From the user interface to the leveling progression to the man vs. alien storyline, this is a brazen clone of XCOM.

Instead of being disgusted by what feels like a gross rip-off, I started to get sucked into the turn-based strategy mechanics and really lost myself in Falling Skies. Even if it is the poor man's XCOM, the truth is that Firaxis made an incredible game that deserves to be cloned. By sticking so close to the proven formula, this downloadable PlayStation 3 title manages to be a lot more fun than most games based on TV shows.

Set somewhere between seasons three and four, Falling Skies tells a fairly uneventful story about a group of resistance fighters who are growing an army to overthrow the space invaders. This is done by taking on small missions around the greater Boston area. These tasks include clearing a city of aliens known as "skitters," escorting survivors (children, scientists, etc.) to safety, fighting off mind-controlled humans for resources and setting explosives to disrupt communication towers.

Much like XCOM, players can choose from several events happening at once. Since the stages are spread out all over the map, it allows for quite a few unique locations and scenarios. The resistance army will fight through bombed-out city streets, nearby forests, the port docks, industrial settings and several other level types. Each setting has its own look and atmosphere, as well as unique objects that can be used for cover.

The scary part is that you don't know what you're facing when you touch down at a waypoint. The only thing visible is what is directly in front of you, and even that doesn't tell the full story. The levels are large, often with houses and stores the aliens could be hiding in. If you're not careful you'll quickly be swarmed on all sides, and then you'll find most of your team going home in body bags.

Fans of XCOM will feel right at home with the gameplay, which involves commanding a team of resistance fighters by using simple turn-based mechanics. Each character gets two turns in a round, which will often be used to both move the player and then attack the alien invaders. Characters can also move greater distances by forgoing a second turn. Other possible moves involve throwing a grenade, healing wounded soldiers or simply laying down cover fire so the rest of the team has a chance to escape. 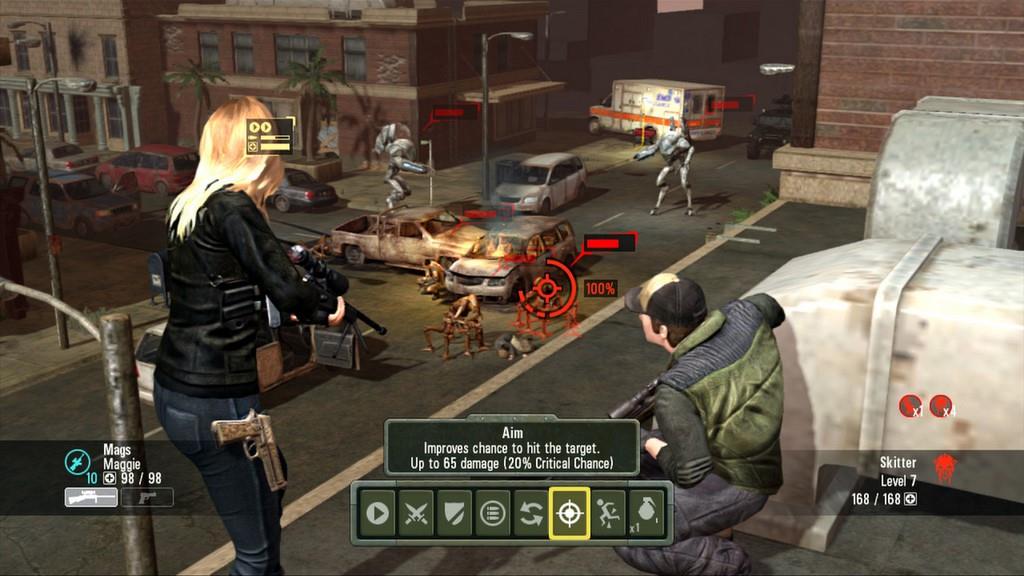 Although accessible to gamers new to the genre, Falling Skies should not be confused as a simple game. There's a lot of depth in the team dynamic, and players will need to use all of their resources in order to keep everybody alive for the extraction. Surviving a mission will add experience points to each character, allowing them to work their way through the ranks and learn new and valuable perks.

But don't work these soldiers too hard, because when they die, they stay dead. This is one of the most heartbreaking moments in Falling Skies. You'll spend dozens of missions building up what should be the ultimate soldier, only to see them get killed off on the battlefield. At that moment a little piece of you dies along with your fallen friend. Thankfully there are a number of ways to avoid that from happening, but there will be times when death is near impossible to avoid. I like the way it's handled in these types of games.

Completing missions will not only advance the story, but also give the player much-needed resources that can be used to upgrade the base, recruit new resistance fighters and research high-tech weapons. Although each task will take a few days to complete, this is the best way to upgrade each character's weapons, armor and health items. Players will also be able to improve their chances in the battlefield by increasing the squad size from four all the way up to six, not unlike another turn-based strategy game you may have played. 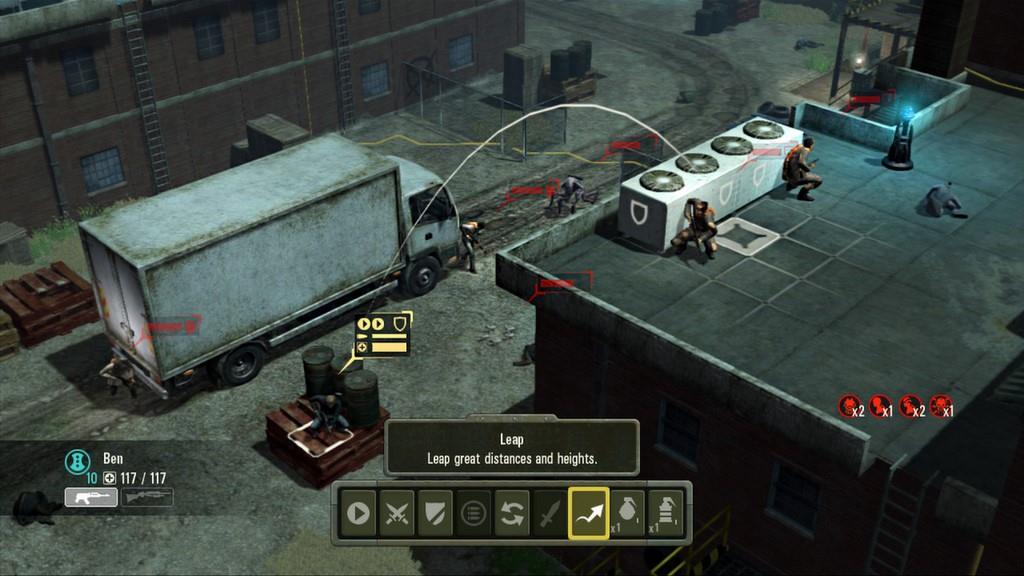 Because of the science fiction subject matter, Falling Skies is the type of television show that lends itself well to this style of game. Unfortunately, the source material also holds the experience back in some disappointing ways. While there's certainly a lot of variety in the mission locations, the fact that everything is happening in one centralized area makes this game feel small. In comparison, XCOM had players battling alien forces all around the world.

Having a smaller focus wouldn't have been a bad thing if it was used to tell a more personal story. Despite having a cast of characters that had been developed through dozens of television episodes, Falling Skies makes very little attempt to tell a personal story. There's no melodrama between characters and don't look for cinemas that will expand your understanding of the TV show.

At the same time, the game feels hamstrung because it can't tell a larger story. It takes place between seasons three and four, which means nothing that happens here can be so important that it impacts the show's continuity. It makes the most of what it has to work with, but fans looking for great storytelling should probably seek out another game. 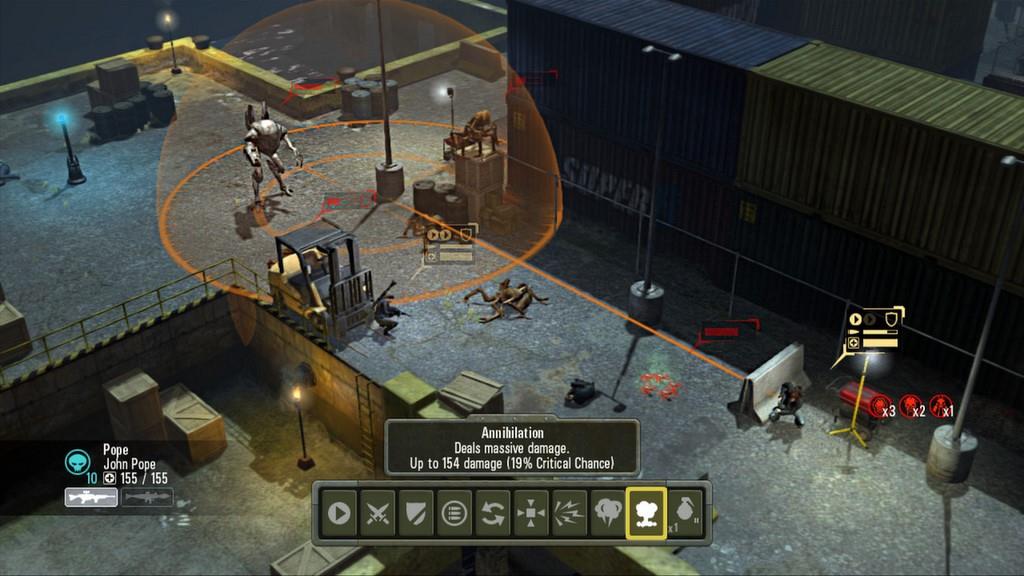 Visually, Falling Skies: The Game is incredibly rough. None of the character models look right and many of the textures look like they came from PlayStation 2 games. The animation is equally dubious. And if all that isn't bad enough, the locations are often drab and unappealing. The same goes for the audio, which involves using the same six audio samples dozens of times in every mission. Thankfully none of this impacts the gameplay, but I can't imagine anybody being satisfied with the overall presentation.

This PlayStation 3 game feels like somebody made a mod for XCOM and imported Falling Skies fanfiction. While the theme lends itself well to this style of game, it's a shame that more wasn't done with the license. But even if the story feels underdeveloped and there's nothing original about the core mechanics, the truth is that Falling Skies: The Game is fun because it's ripping off one of the best products of the last two years. It's a serviceable clone that will likely tide players over until Firaxis releases a next-generation XCOM sequel.

Falling Skies: The Game may be a serviceable XCOM clone, but it fails to use the potentially awesome license in any interesting ways. Still, the gameplay is strong enough to make most players forget about the disappointing story and limited character arcs. Fans of the TV show and XCOM will almost assuredly enjoy this brand new PlayStation 3 game.