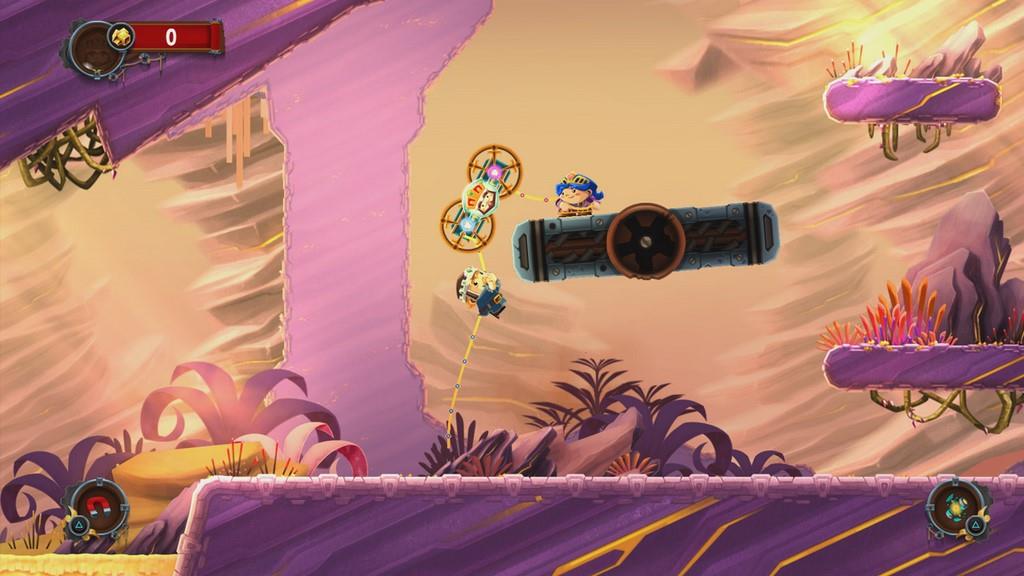 How does one even begin to describe the world of Frima Studio’s Chariot? It is, easily, one of the most ridiculous premises ever in a video game and, at the same time, one of the most charming adventures I’ve played in a long long time. Both comments are compliments to the title regardless of how you look at it. While you wouldn’t think that those two sentiments would describe the same game but in the case of Chariot, they do.

In the beginning, it seems like this is going to be a somber experience, one making you reflect on the bond of a father and his child. You’re a Princess and the game starts with you laying your father, the King, to rest in the family tomb. However, that somber tone doesn’t last very long as the spirit of your old man it a cranky and outspoken one, and one that won’t settle for just any resting place. The King isn’t happy with his burial plot and and wants an upgrade. You are given the duty of finding the King a new tomb, one more fitting of his social stature, and encouraged to improve that stature in the process.

Yes, you are a Princess (and / or her suitor if you choose) who drags around the coffin of her dead father and collects money to increase your family’s wealth. I told you that is was a ridiculous premise. However crazy it may be, it is done incredibly well and proves to be an extremely entertaining ride along the way. The funerary box is more than just an obstacle in your journey; the King’s death-chariot is the only one who can collect gems and riches along the way, so you really don’t have a choice other than taking him every where you go, with his undead commentary ridiculing you along the way.

Tugging around a large sarcophagus and facing the problems that would present is the crux of the game’s physics-based gameplay. How is a small girl, with or without another set of hands, supposed to get a hulking casket up onto high ledges or perhaps stop it from rolling downhill when it hits full speed. The weight of it often pulls you down off of ledges if you stand too close and can dictate your direction if you aren’t careful. These are the challenges and puzzles that you face and to be honest, they’re incredibly enjoyable due to the simplicity in their design.

The game is all about traversing the ever-changing landscape with the coffin in tow. You will start of with nothing more than a simple rope that you can attach to help you pull it up onto ledges or over large roadblocks, but over time you will gain a wide selection of tools to assist you along the way. Perhaps you get a peg that allows you to anchor the casket while you clear the path or a type of bomb to help create an alternate route. These things won’t just be handed to you, you are going to have to find the blueprints for these various devices throughout the various caverns and have them made in order to reap their benefits. The game is all about exploration and it truly embraces the concept from start to finish.

The level design in Chariot is full proof that exploration is a huge focus of the game. None of the levels are straight forward treks from point a to point b. There are a variety of paths and exits to each level, which makes for a varying experience for each player. Completing a level via one exit opens up other options for the level including speed trials and special routes to your ultimate destination: the King’s final resting place. You will want to go back and find that other routes and paths not only to make sure you are laying the best route to the end, but to ensure that you have collected all of the riches and blueprints that you can find. 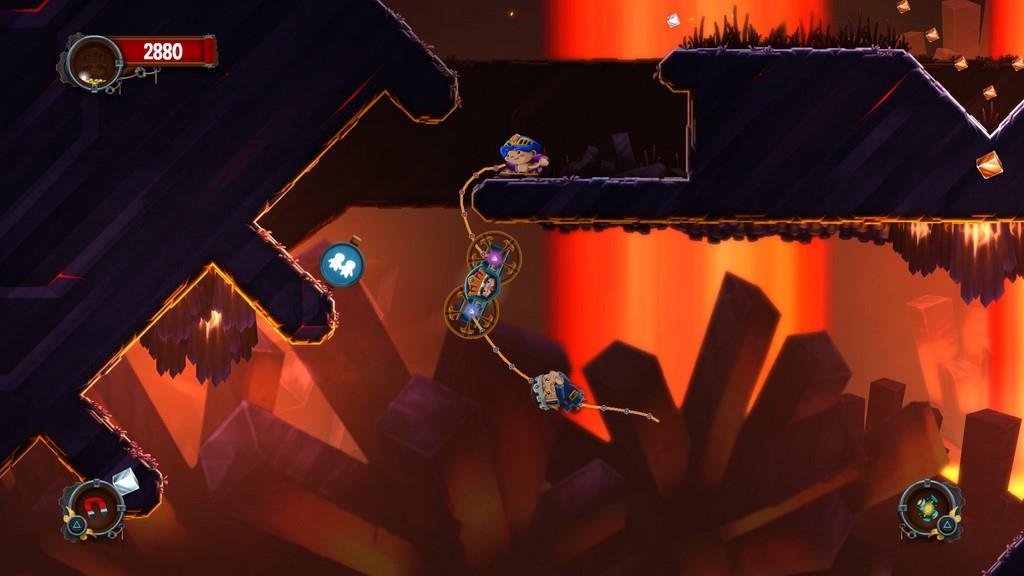 There is a bit of combat along the way but it really isn’t the focus of the experience. Combat is extremely simple, taking place occasionally when bandits rush your party. These enemies can’t do any damage to you or your partner, but will simply rob you of the gold and other riches that you have amassed, which is a big no-no in the eyes of the king. Depending on which character you are playing as you will fend them off with either a sword (Princess) or a bow and arrow (her fiance). Aside from the extended range of the fiance’s bow, there isn’t much of a difference between the weapons, so it really doesn’t matter who you choose.

One of the things that really surprised me about the game was its level of polish. That isn’t meant as a shot to the developer or the project, it is actually a major compliment. This game is just put together incredibly well, from the gorgeous, cartoon style visuals to the incredibly amusing and great quality voice acting. It looks really, really good in motion and is a very colorful and engaging world. The voice acting in particular, as I said, is incredibly well done, although it is used sparingly throughout the tale.

There are two main gripes that I have with the game. First and foremost, is the lack of online multiplayer. It is very apparent that Chariot is meant to be a cooperative adventure from the start. While you can play by yourself, the game never sees its potential when going at it alone. It almost feels like a completely different game when you add a friend into the adventure. The game plays a lot better and moves along a bit faster when you have a partner in crime along the way.Unfortunately, you are literally going to have to bring that friend along to see the game’s potential as offline cooperative is the only option; considering that the game relies so heavily on the multiplayer experience, it really shocks me that online options weren’t included to ensure that players get that coop experience. 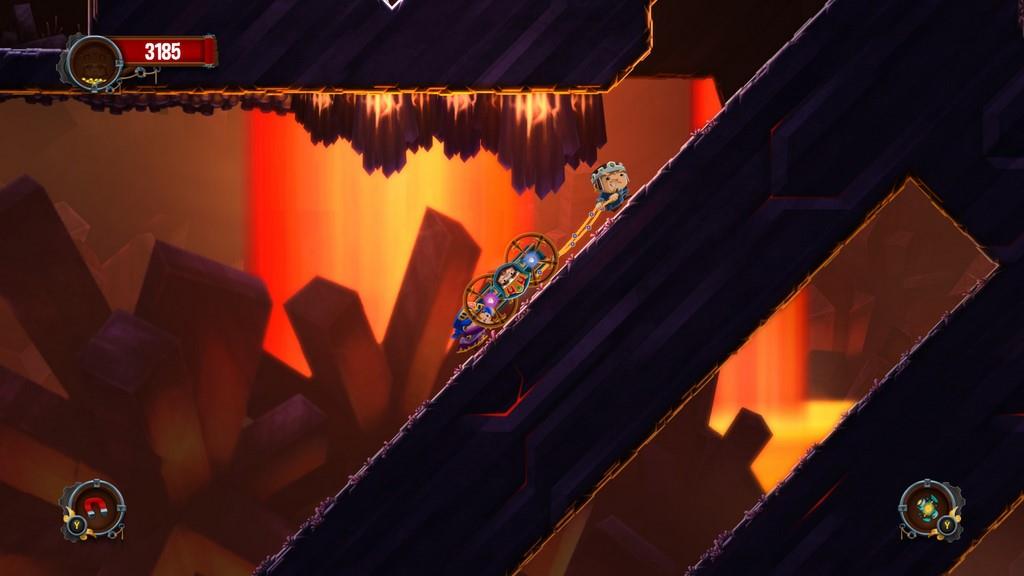 There are a lot of areas that you will uncover that require you to have two players in order to access; it reminds me a lot of LittleBigPlanet in a sense, with signage appearing in the level letting you know that a partner is required to proceed. These areas are treasure-troves and really help you a lot in reaching your monetary goals of appeasing the King, but you won’t get to experience them if you don’t have someone playing along with you. The puzzles in these areas require a lot of teamwork and are some of the best in the game. Unfortunately, a lot of players will never experience them because they don’t have anyone to play with them.

The other issue is the pacing that results from adventuring alone. The game and its characters are really (REALLY) slow moving. Why couldn’t there be a run option? Some times it just feels incredibly tedious to make it across a simple, straight-forward stretch of terrain. This might sound like a ridiculous “nit-pick” but trust me, you will see what I mean if you play it. You will will find yourself yelling at your character to move their butts because they just troll along at a leisurely pace.

Chariot is one of those games that a lot of gamers will glance over in either the PSN store of the Xbox Marketplace, but they will only be robbing their selves of one of 2014‘s hidden gems. Despite some slow pacing, this adventure will put a smile on your face from start to end. Just make sure that you bring a friend along for the trip because the cooperative play makes it infinitely more enjoyable.

Chariot is a decent adventure when you go solo, but an excellent one when you bring a friend. You’ll definitely want to sit a partner down next to you to get the most out of this experience.