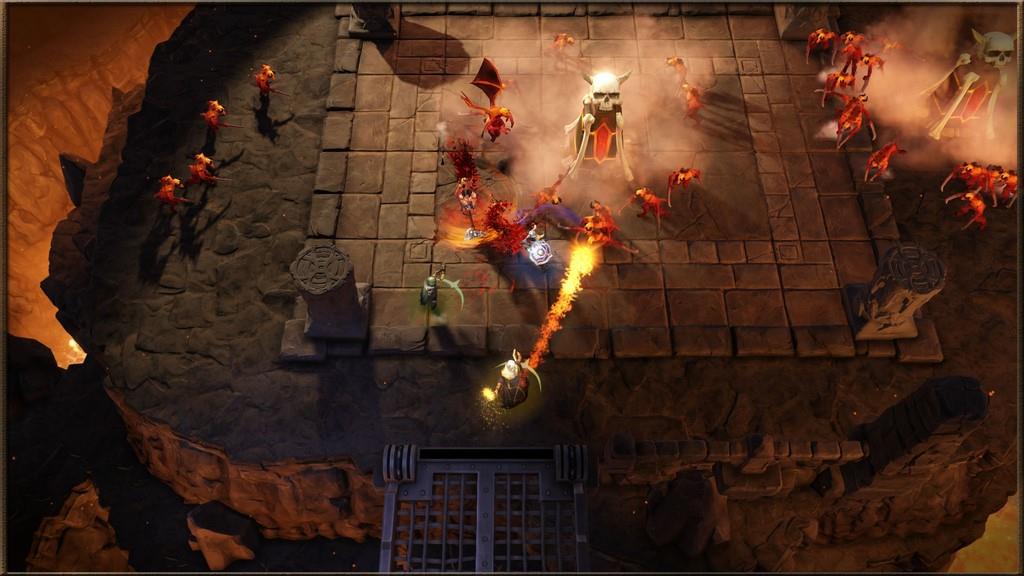 Gauntlet! Possibly the most iconic videogame of all time (or at least, the most quoted one) received a new installment earlier this year. It's only available for PC and considering I haven't heard any news concerning a console release, chances of seeing it on XBLA or PSN are pretty slim. Which is sad, considering how well it plays with a controller. The original four characters are back- Thor the Warrior, Thyra the Valkyrie, Questor the Elf, and Merlin the Wizard have a whole new Gauntlet to tackle, courtesy of Arrowhead Studios.

As I just said, Gauntlet is best played with a controller- the game says as much every time you start it up. You can play with a mouse and keyboard, but considering the controls are set up like a twin-stick shooter, it just doesn't handle as well. And like every other Gauntlet game, this one is best played with friends. Multiplayer is the heart and soul of this franchise- you can go it alone if you want, but it's a hollow experience compared to playing with other people. It has online and local multiplayer, and if you want to play with your friends on Steam but don't have a full party, you can still fill it with strangers in the matchmaking lobby. I like that you can do any combination of local and online multiplayer, but I wish you didn't have to do all of it in the lobby. When I was playing with strangers, I found myself really wishing for drop in/drop out co-op. Mainly because when I'm in the mood for a hack n' slash game, I don't want to wait in the matchmaking lobby for my party to fill up. I want to dive right into the action and I don't care if everyone else has to catch up. But I also found that even though I was settled in for the long haul, that wasn't always the case with my partners. If your teammate drops out after a couple levels but you want to keep going with a full party; you have to leave the game, go back to the matchmaking lobby and wait for your party to fill back up. But if you're doing local multiplayer or playing with friends, you won't have to worry about this as much. Unless you have flaky friends, then that's just your problem.

The best part about this Gauntlet is how unique each character is. Not only do they have their traditional sets of strengths and weaknesses, but they each have their own control scheme. The Warrior is the strongest, with the caveat that he can only make melee attacks. His control scheme is the easiest, primarily involving X and Y for light and heavy attacks, and the right thumbstick for his Rush ability. But his playstyle lends itself to putting yourself in harm's way in order to be effective, which makes him the best character for drawing aggro or taking out high-priority targets that normally have a lot of hit points. The Valkyrie is the most defensive and balanced character. She has both melee and ranged attacks that don't do a ton of damage but are still surprisingly effective at taking out minions and pulling her allies out of tight spots, making her the best crowd control and support character. The Elf is by far the fastest, and even though his basic attack is weak, he's got a few potent tricks he can pull out when he needs to. He can dance around the battlefield picking off targets with his bombs and sniper shots, and if the player is good, he draw aggro into his teammate's area of effect to finish them off en masse. Because the Elf is so fast, he's good at getting to the treasure before everyone else- making him a lot of fun to play, but a nuisance to play with. And finally, we have the Wizard- master of the three elements that can be combined into 9 different spells you can swap out on the fly. The wizard is both powerful and versatile, but he has the lowest HP and longest cooldowns. He's got rays, spheres, cones and blasts that can burn, freeze, or zap his opponents into submission. But if you don't know what you're doing, or aren't careful about your spells' cooldowns, it's really easy to find yourself cornered with no way out.

I also really enjoyed Gauntlet's leveling mechanics, because almost every aspect of your characters can be improved. Their defense, their attack power, the amount of health they regain from eating food, getting health back from shooting the food, dying, everything.  Instead of earning and spending XP like most RPGs,  you just keep playing until you reach a milestone and go up a tier. For example, the "As Luck Would Have It..." Mastery requires you to smash 10 props. This puts you at the bronze tier, which gives random crates and pots a 5% chance to drop gold. Once you destroy 500 props, you reach the silver tier that gives a 6% chance, and after that the gold tier gives a 7% chance for gold to drop. There are a few generic Masteries  that apply to every character, but everyone also has their own class Masteries- like the Elf's "Precision Shot" that lets you attach bombs to your arrows, or the Valkyrie's "Heir of Valhalla" that gives her a hefty defense buff when she's below a third of her health. And the best part is that you get to keep your Masteries after you finish. If you get the Wizard's "Flamewalker" Mastery on the Hard difficulty, you'll still have it when you start a game on the Unfair difficulty.

As much fun as it is to delve through the dungeons of the Gauntlet with your friends, there is one massive setback that keeps this game from being truly great. Primarily, the fact that the game was clearly designed with replayability in mind, but there's a lack of variety in the levels because there are so few of them. All counted, there are fifteen levels- three worlds with five levels each. And while they're fun the first couple times you play through them, there isn't much to be gained from running them a third or fourth time- even if you switch characters and up the difficulty to try and make things interesting. This game would have greatly benefited from procedural generation. If you're going to use a leveling system that depends on multiple playthroughs, you need levels that don't get stale after a few runs. I'm not going to say that procedural generation is the only way to do this, but it is an effective tool. There's a reason so many games are going the rogue-like path these days (although admittedly, it's gotten to be a bit overused). At the very least, including more than three sets of five levels would have gone a long way.

But maybe I'm asking for too much. After all, it is only $20. If you and three friends want to pick it up, run the Gauntlet a couple times before moving on to something else- you'll probably feel like you got your money's worth. Just don't expect your fourth runthrough to be as exciting and engaging as your first.

The newest installment in the Gauntlet franchise is a lot of fun, and the gameplay is strongly reminiscent of classic gaming, while taking advantage of some modern conventions. All of the characters handle differently, and each world has a distinct flavor to it. I like how the leveling system works, since it depends on multiple playthroughs- it fits very well with what I expect from a Gauntlet game. Unfortunately, the lack of variety in levels doesn't warrant more than a couple playthroughs. Which really hampers a game that hinges on you and your friends beating it and coming back for more.