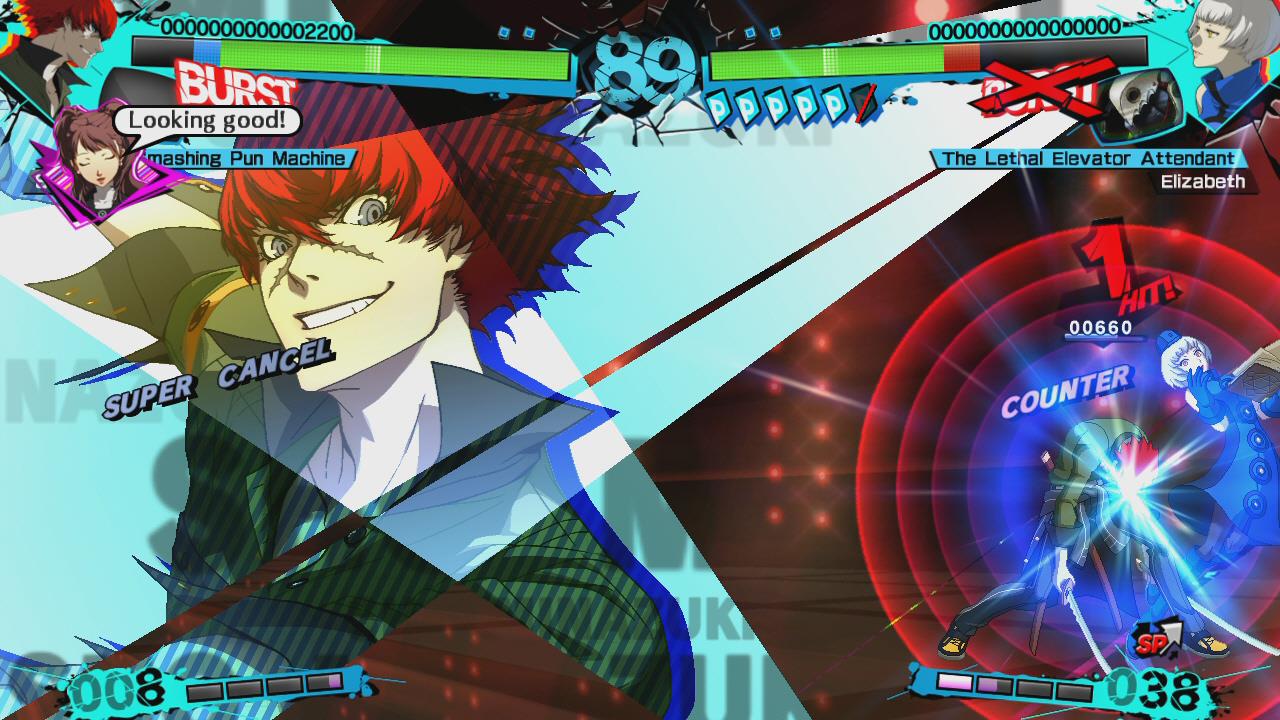 You'd think I'd be tired of all the Persona business I expose myself to these days, what with Persona 4 Golden the Animation currently airing, Persona 4 Golden in my Vita, the upcoming Persona Q on the 3DS, along with Persona 4 Arena Ultimax, which will be dropping this Tuesday and I'll be talking about today. But no, I love it, the universe, the characters, the story, it's all a great deal of fun for me. So it's of little surprise that I'm in love with Persona 4 Arena Ultimax, even more so than it's 2012 predecessor, which I spent countless hours engrossed in, hoping to learn the origins of Labrys and General Teddie. Now with Ultimax, the experience is leaner, faster, and still manages to pull off a good yarn in this crossover universe. Now if only the damn online system would work.

Since I'm more of an online warrior than I'd like to be thanks to my hectic work schedule, I typically can only play against online opponents, or topped out computer opponents that eventually become a bit of a bore to fight. So when it comes to Persona 4 Arena Ultimax, there's initially a lot of things for me to be excited about. The new ranked system doesn't require you to sit mindlessly in a waiting screen, you can do other single player activities while you 'enlist' and queue up for a ranked match. Or if you want to be a little bit more social there's the new lobby system that will let you join up to thirty one other players as you take turns sitting down at arcade cabinets in a spiffy looking lobby. This all sounds well and good, but in practice the lobby system has been frustrating from the moment I started using it. In the two weeks I've had this game for review, I have not been able to successfully connect to a single player. With a direct connection to my cable modem I was unable to play online with other people. Enlisting in ranked matches was met with the same experience, I have left this game on for hours with no luck in playing a ranked match. Hopefully this will be an improved experience once more players get online next Tuesday. But for now, it's been a terribly frustrating experience to see other players go at it, and to get stonewalled by a 'Failed to connect' message at every turn.

But let's get to what makes this game a strong contender for best fighting game this year, mainly the expansive amount of content that the game has received. First up let's talk about the roster. It's received a modest six new additional characters, and while that is nothing to scoff at, there's also the inclusion of Shadow versions of almost everyone in the cast. The six new fighters include Rise Kujikawa, who's gone from ring announcer to capable fighter with her persona Himiko. Her move set is as full of energy as you'd expect from an idol, making use of a mic stand to give her a bit of range to go with Himiko's zoning attacks. The Persona 3 cast receives three additional characters to round out the Shadow Operatives. Ken Amada and Koromaru are an interesting team, since they only use their Persona for special moves, you'll be using the A and B button for Ken's attacks, and supplementing them with Koromaru's C and D buttons. Junpei Iori is another special case, since he wields a bat, he becomes stronger with the more runs he gets, which increases every time he connects with an attack. His Persona Trismegistus serves up some pitches too when used for super moves. Yukari Takeba is a visual standout with her sentai super hero inspired wardrobe choice. She's a pro with a bow and uses her Persona, Isis to set up combos that bounce the enemy around. Lastly is the new character in the game, Sho, Sho Minazuki.

I actually named two different characters there, what that means, well, you'll need to dig through the story mode to figure that one out. But he and his Persona Tsukiyomi are a danger to everyone involved in trying to find out who kidnapped Labrys and set up the P1 Climax in the first place. The story mode this time around is a lot leaner, meaning it doesn't require a ridiculous number of playthroughs, in fact it's all pretty straightforward now and doesn't cause a sort of dissonance between who is experiencing what in the story. This means you won't always get your choice of fighter in the story mode, but you'll be happier to know that it doesn't take thirty plus hours to see everything that the game has to offer this time around.. 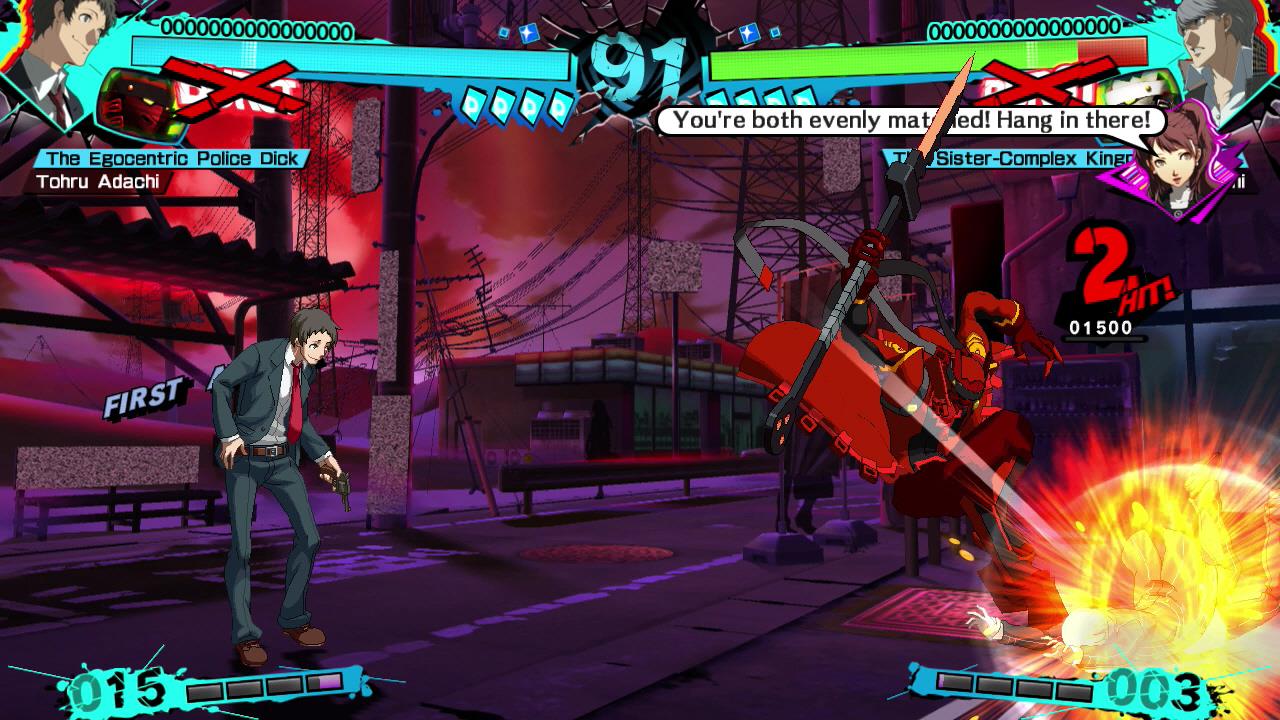 In addition to the core cast, you can now play as Shadow versions of each of the characters, with the exception of Sho and Elizabeth (although I'd like to imagine a Shadow version of Elizabeth would be especially terrifying). What these Shadows bring to the party, is gameplay that is similar to Persona 4 Arena, meaning they have the old move sets, while the core cast had learned a few new moves. They also have a 'Frenzy' mode which allows them to sacrifice and drain their SP in exchange for unlimited use of special attacks. Think of this as kind of like the V-ism mode from Street Fighter Alpha 2 or Capcom vs SNK 2, as it sets up for combos that aren't normally possible with the standard characters. Shadow characters give up a bit of health for this power, so it's definitely a risk versus reward system when playing as them.

Outside of the story mode is the typical training mode, where you can practice combos to your hearts content. Then there is the challenge mode, which features combos that require some deft precision to pull off. And there is what is probably my favorite gameplay mode of the whole game, the Golden Arena mode. In Golden Arena mode you take your character of choice through a series of floors. Along the way you'll earn experience, which in turn levels up your character and unlocks special abilities that can be used in battle. Early on you'll unlock skills that will prevent you from suffering from status effects, or skills that increase the odds of hitting your foes with status effects. If you feel the need to take a break, feel free to turn on the game's auto mode, which is pretty capable of handling enemies while you take five. Every few stages will contain a boss, beat them and you'll gain an extra special ability you wouldn't normally unlock for that character, and they also serve as a checkpoint, so that if you die, you can restart from the last boss you defeated, which isn't all that much different than how the core games treat loss. And not to be a bore, but you've also got Score Attack and standard Arcade modes. It's kind of a bummer the Arcade mode didn't have some sort of fanciful side-story, but that is really nitpicking on my part. 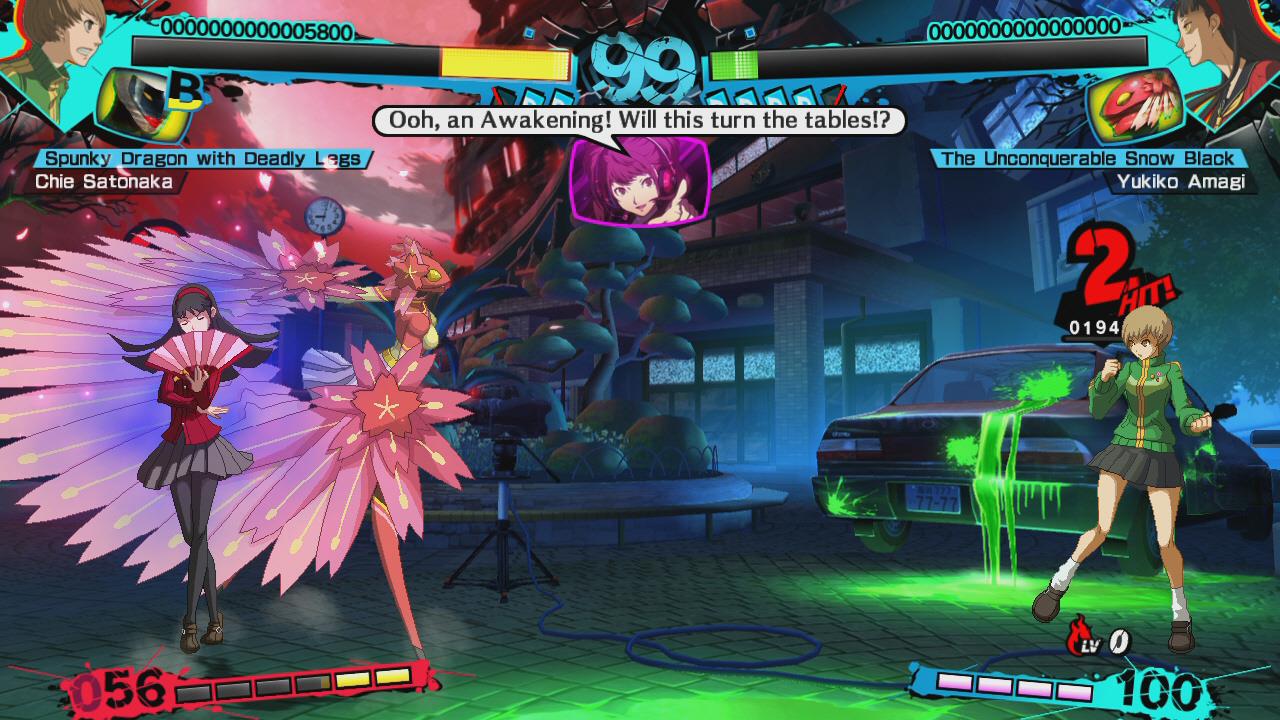 Visually not much has changed in the two years since the first Persona 4 Arena, there's a few new locales around Inaba in which to fight, but for the most part this is the same game from a graphical standpoint. The audio has received a few new tracks from Shoji Meguro featuring Shihoki Hirata and Lotus Juice, and it's quite a testament to Meguro's work that tracks from both Persona 3 and Persona 4 fit right in with a fighting game. The vocal tracks have curiously been pared down in the story mode. While the first game featured dual language vocals for the entire game, the story mode in Ultimax is limited to an English only option, with Japanese vocals available for when you're actually in a fight. This means you'll be hearing more of that awkward accent from Labrys. Granted you can't really transfer Kansai-ben to an English speaker, but it is a minor disappointment to say the least.

The quick and dirty is that Persona 4 Arena Ultimax is a stellar follow-up to what was already a great game. It's still a very friendly game to get in to, and has a great story to expand the Persona universe. The trouble I had with the online portion of the game are certainly frustrating and serve as a pretty glaring blemish on an otherwise fantastic gem of a game. If you picked up the original game, there is certainly plenty here to warrant a pick-up of Persona 4 Arena Ultimax, and if you've been sitting on the fence with this franchise, now is the time to get on board.

Aside from a really frustrating online experience, Persona 4 Arena Ultimax delivers a compelling story, which is an odd thing to say about a fighting game. The balanced roster and additional characters definitely make a strong case for why you need to pick up this game. If you've got an itch for a solid 2D fighter, look no further.