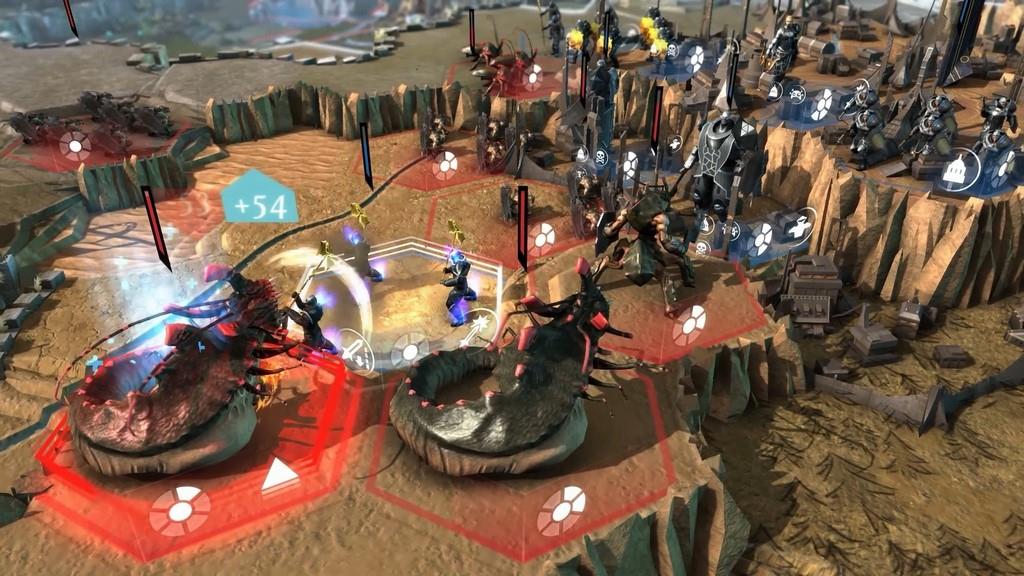 Endless Legend is a 4X (explore, expand, exploit, exterminate) fantasy game from developer Amplitude, the studio that brought us Endless Space. Endless Legend picks up a small piece of the story of Endless Space, focusing on the planet Auriga and its colorful inhabitants.

And what colorful inhabitants they are. Amplitude has gone all out on creativity with these species. Were-elves? Check. Vampire knights? Check. Crash-landed survivors from an alien civilization? Check. Conservative, sentient dragons? Check. Mages that gain power through self-inflicted pain? Of course. And there are more, at least as weird. This is before any expansions come out.

The sides are each written very well, with interesting backstories and in-game choices that help further develop each side's story. The differentiation of sides does not end with simple color text, however, but is deeply integrated into gameplay. The Roving Clans, for example, can move their cities. They cannot, however, start a war--they need to goad others into attacking them first. Not that they generally want to, as they make good coin off of trade. The Necrophages, on the other hand, are constantly at war with everyone. If they are not attacking you at present, it is only because they are saving their strength, waiting for you to show weakness. Their power comes from eating the dead bodies of their enemies, so this suits them just fine. Necrophages will even sacrifice their own to curry favor with their gods. This sort of differentiation has not been seen since Dominions.

The sides are so varied that replayability is virtually endless. This is probably the most successful game at presenting such a variety of different factions, especially as they are so well balanced. The playtesting department at Amplitude deserves praise for this accomplishment.

Matching this variety in factions is a gorgeous interface. The map itself is fantastic, with lush green forests, wintry white wastes, mysterious woodlands, ancient ruins, and many other terrain types. Different resource types add to the variety, with such exotic substances as Glassteel, Mithrite, Palladian and others adding both strategic depth to city placement and color to the world. Changes in elevation are displayed in a terraced fashion, rather than the usual smooth gradations. This enhances an already interesting aesthetic while also making it easier to tell at a glance what altitude a piece of terrain is at.

Eventually one can get tired of  reading your faction's backstory and looking at the map and want to play the game. One of the first oddities is the way settlement works. Unlike Civilization or many other 4X games, cities cannot be plopped down just anywhere. The map itself is made of hexes, but these are grouped into areas. Each area can only have one city in it (yours, or an enemy's). It can also have towns that belong to one of several minor races. Treat the minor race right (generally by going on some sort of quest for them) and they will be pacified. This provides bonuses to your empire, from a bonus (say, +5% production) to new units. Or you can just smack them around until they agree to join your side. Whatever works. 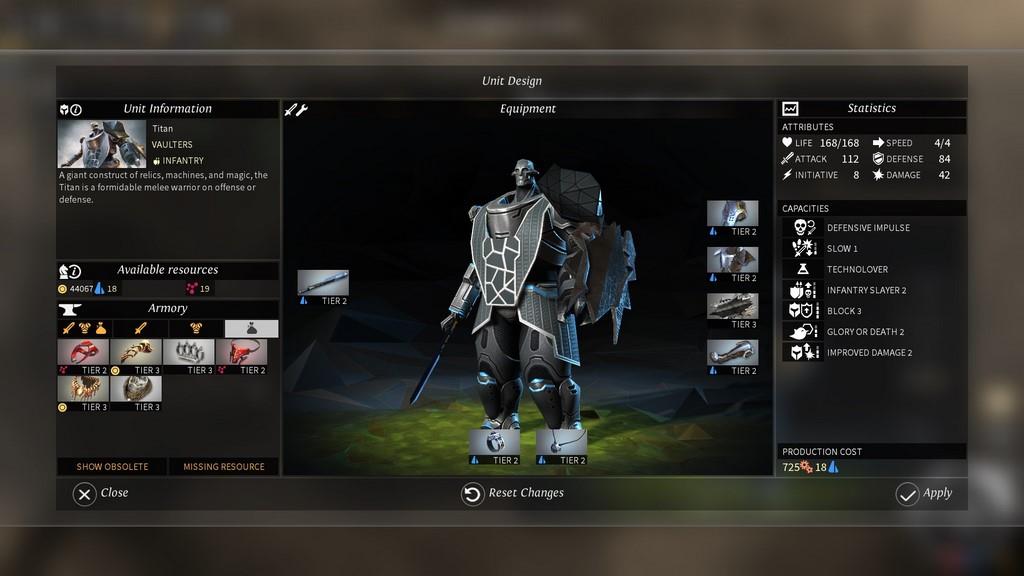 Despite room for initial expansion, eventually you will meet the other factions. Sure, trade is an option, but eventually war will break out. Army composition is similar to Heroes of Might and Magic--put a hero together with some supporting troops, and fight on a special tactical map. In this case the tactical map is basically a blown-up version of the strategic map. The terrain type is similar; if your armies meet in a forest, the tactical map will reflect that. Elevation differences in the campaign map will also be reflected, so try to come at your opponent from the high ground. The tactical combat itself is not very deep. Generally going in with the best units will win the battle, with little room for tactical maneuvering. Luckily, this feature can be skipped, and probably should be until more work has been put into it.

The great variety in racial characteristics is not shared by their units, however. The primary way of improving units is to provide them with better weapons and armor. Better weaponry comes from a combination of special resources and technological advances. Although this differs from the standard "better tech means new unit types" mechanic, it is in some sense a more realistic way of advancing your army's power. It also means that your units become more dependent on your economy, in the sense that more powerful units require more expensive (and rare) materials. It is easy to design an uber unit your empire cannot build enough of to make a difference. 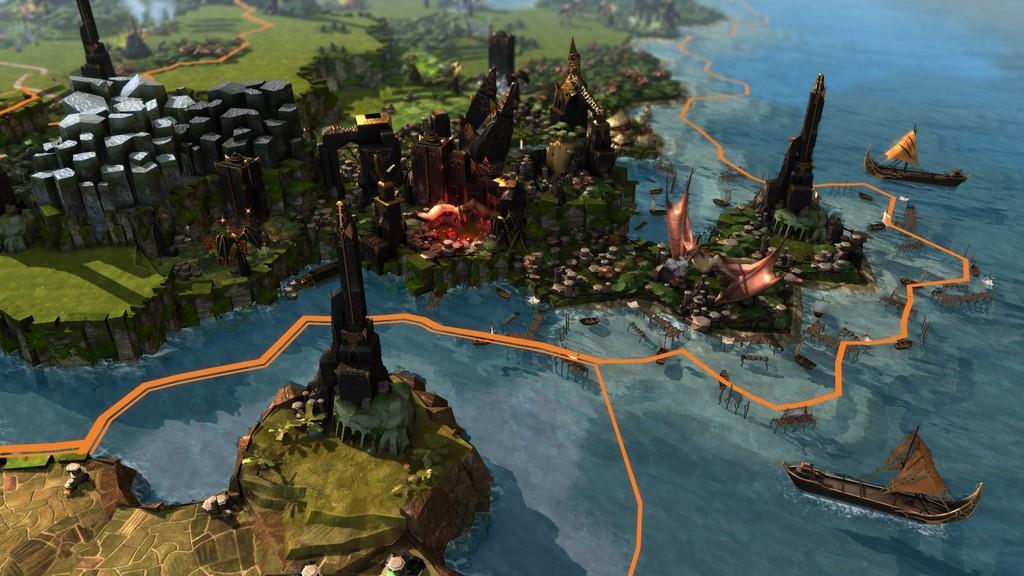 So is Endless Legend the perfect game? No, although there are a lot of things to like about it. The biggest problem is actually the gorgeous map. It is often impossible to simply figure out where anything is. There is so much richness of detail, of texture and color, that units just blend right in. Clicking off of a unit makes your cities effectively disappear, also, blending into the background. Zooming out helps, as the interface changes to a simpler, solid-color mode with important items highlighted. This rather useful level is ugly, however, which sort of defeats the purpose of having a good-looking interface.

The interface is also a problem. It looks nice, but spends a good portion of its time being unhelpful. Events have a tendency to pop up on top of each other, frustrating any attempt to do one thing at a time. And when one clicks on the event, nothing happens. For example, when looking at the diplomacy screen, a "your city needs something built" message can pop right up. First of all, I'm busy here. Second, clicking on "build something in the city" makes the message go away, but does not actually take one to the city in question. The idea of grouping the things that need attention into event boxes that drop onto the right-hand side of the screen is a nice adoption from other games, but needs work.

Endless Legend is an inventive, aesthetically pleasing 4X game of the kind that has not been seen in a while. The factions are different down to their roots and gameplay supports a variety of styles. Other games will be stealing Endless Legend's ideas for years.

Welcome to the new king of fantasy turn-based 4X strategy. While not perfect, this game has achieved many of its lofty goals. A must-buy for any fan of TBS games, Endless Legends could put a dent in the sales of that other big game coming out soon. It is that good.