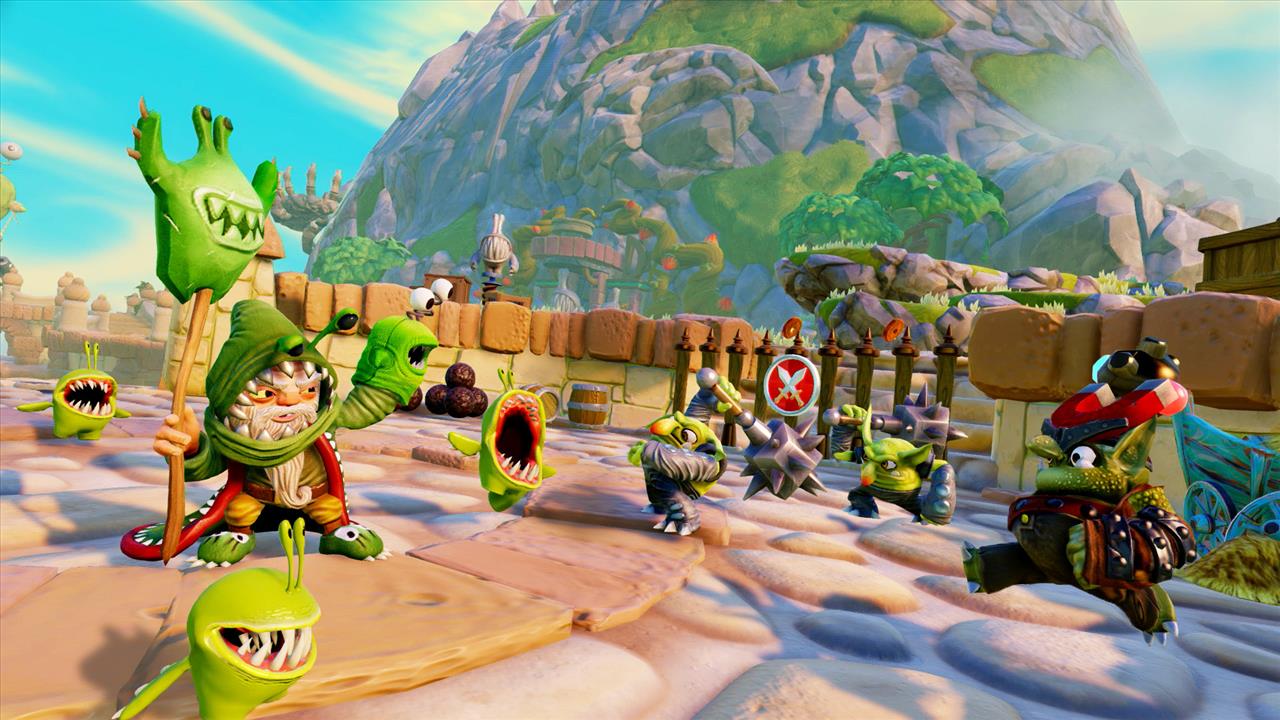 Confession: I am hopelessly addicted to the Skylanders franchise. From the moment that the first game was revealed, I knew that this was not going to be a good thing for my financial well-being. Between my daughter and myself, we have dedicated ourselves to tracking down and owning every figure that we can get our hands on. Forget about Pokemon, the Skylanders are the series where we “gotta catch’em all”. Seriously, they’re sort of taking over and honestly, I am okay with that.

Now that Summer is over, it means that it is time for a new entry in the series. The Skylanders are back again for another holiday season and as usual, we’re seeing a variation on the basic premise. Toys for Bob is back at the helm and honestly, this year’s installment couldn’t have turned out better. Great gameplay, an excellent new mechanic (trapping), and that now-patented Skylander charm all result in another excellent addition to one of my favorite franchises in gaming.

As usual, Kaos is at it again, creating trouble throughout the world of Skylands. This time he has blown open Cloudcracker Prison and set the prisoners free to reign terror. The player, the Skylanders and the new Trap Masters need to capture them and put them back into captivity and stop Kaos from creating more havoc. It’s a pretty straight forward premise, as it is supposed to be. The real focus here is fun and adventure, and Trap Team has both in abundant amounts.

If you have played any of the previous games in the series, you know what to expect. You pick your favorite figure, put them on the Portal of Power to summon them in the game, and wander across the lands taking out enemies and solving puzzles. You’re still earning experience to power up your character’s arsenal of moves and you’re still collecting hats to both make a stylish statement and to add some additional power to your punch. All of your figures from the previous games still work, including the Giants and the Swap Force characters, plus we get a whole new category of characters: the Trap Team.

The Trap Team characters, along with specific figures that are actual traps, have the ability to capture certain, trappable enemies. Don’t worry, the game will tell you when you have encountered a bad guy that can be taken into custody. Trapping them does more than just cease their ability to cause problems, it shows them the error of their ways. These trapped / reformed villains become a part of your lineup of characters and can then be summoned into battle just like your Skylanders. You can swap between your Skylander and the villain that you have trapped on the fly, by simply pressing a button. Trap Masters and trapped enemies aren’t the only new characters entering the experience. There are miniature Skylanders joining the battle too, or as my daughter prefers to call them, Skylander babies. 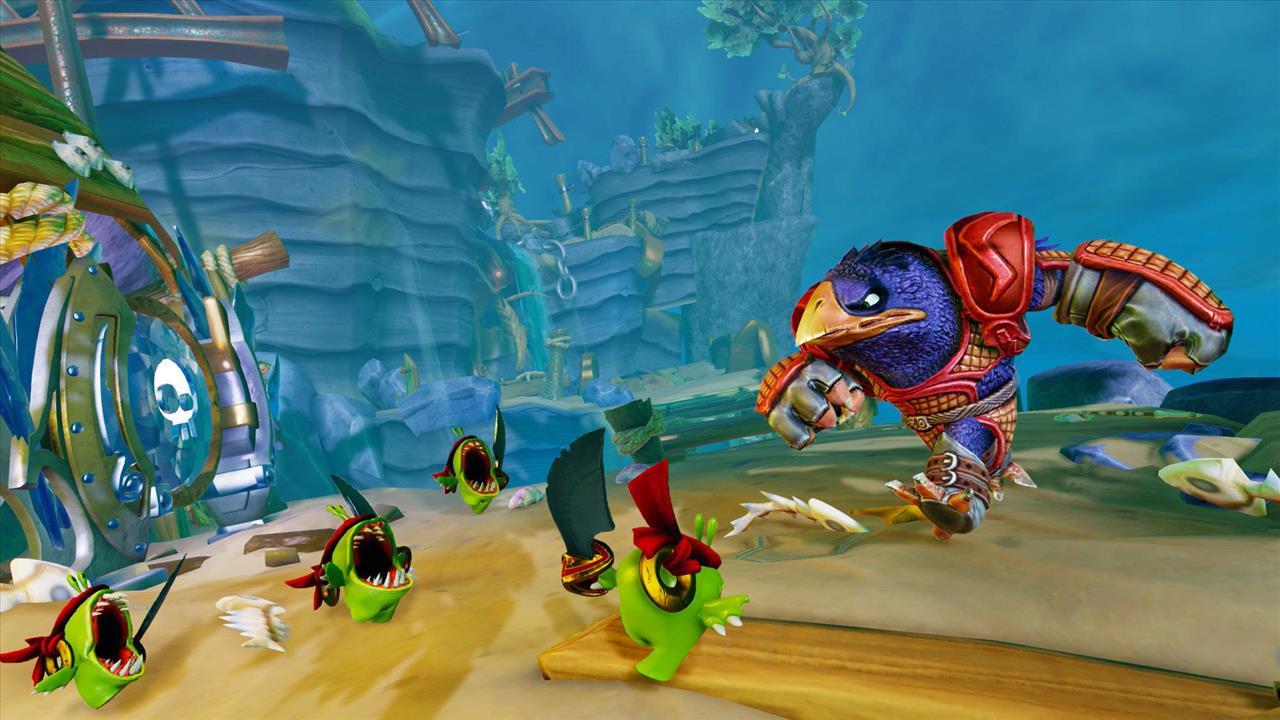 I will be honest, I had a lot of reservations in how the trap concept would work in the game. The biggest fear that I had was that you would need a separate trap for each enemy that you wanted to capture; thankfully that isn’t the case. While you do need a different elemental trap for each type  of enemy, you can transfer captured enemies to your trap at any time from your hub, known as the Skylander Academy. This is great because it gives players the chance to play as more characters without having to buy individual figures for each one. One trap will give you access to a whole lineup of characters, with no additional purchase necessary.

Trapped characters full of character to, as they display while you have their trap inserted into the new Portal of Power. The new Portal has a built in speaker, which allows them to chat with you while you play. They will occasionally call out to you and remind you that they are there and ask to be brought into battle. It’s a nice little touch to the experience and one that the younger gamers will get a good laugh out of; I know that my daughter certainly did. The speaker also makes the trapping process enjoyable to as you hear the transition of the character from the television to the portal; its a simple, yet cool effect. 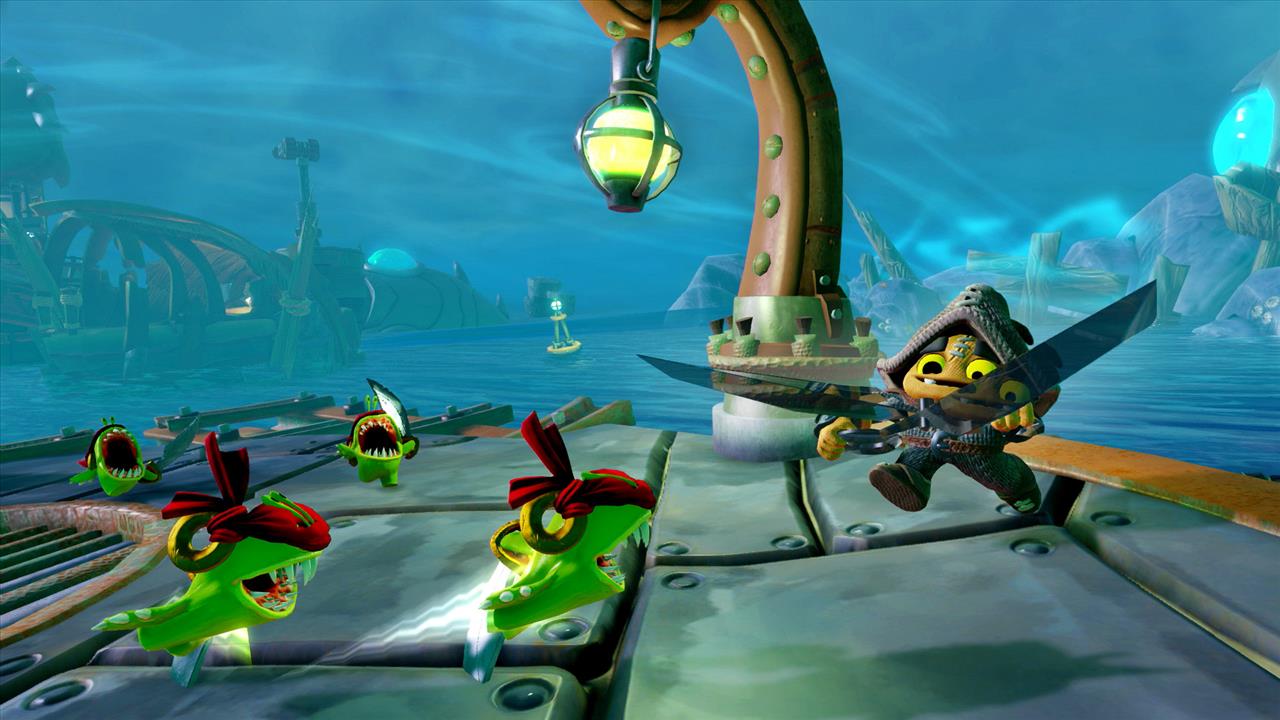 As with all Skylander games, there is a lot of variety here in the gameplay department. In addition to battling enemies you will do a lot of (simple) puzzle solving. Remember, this is a game designed for the younger gamers in your household so don’t expect anything that will truly tax your brain. Most of them are simple, find the key or matching relic to open said gate and continue. This is one of the few franchises where I can just hand the controller over to my little girl and let her go without any assistance or explanation. That trend continues with this installment as well.

The Skylanders Academy, which I mentioned earlier, will serve as your hub between stages and offer you some additional variety in the gameplay department as well. This is your portal to unlocking / purchasing different powers for your figures, as well as playing through the various Kaos Challenges available in the game. The Kaos Challenges were a lot of fun as they play out like a miniature tower defense game, where the longer that you last, the more prize coins you earn. This sort of gives you a fast track to leveling up your favorite Skylanders as well as taking a break from the story.

If there are any issues to be had with the Trap Team experience, it is with the difficulty, or lack thereof. However, I have to remember that this isn’t meant for the diehard gamer like myself. The Skylanders are meant for both younger players on their own and for them to share with their older, experienced family and friends. While I am not entertained adventuring alone, bringing a friend (or kid) along unlocks the true joy of the experience. There are few games in this industry that successfully do that and this franchise seems to do it time and time again. Toys for Bob in particular seems to have that formula down to an art and the result is an experience that the entire family can enjoy, literally. Young, old, veteran or noob, gamers of all ages and experiences who take on this experience together are sure to find plenty to love with Trap Team.

Toys for Bob shows that they make better Skylander games than anyone. It’s simple, fun, and there is an absolute crap-ton of things to do. Once again, I find myself completely engulfed in the Skylanders world and endlessly exploring these worlds with my daughter.