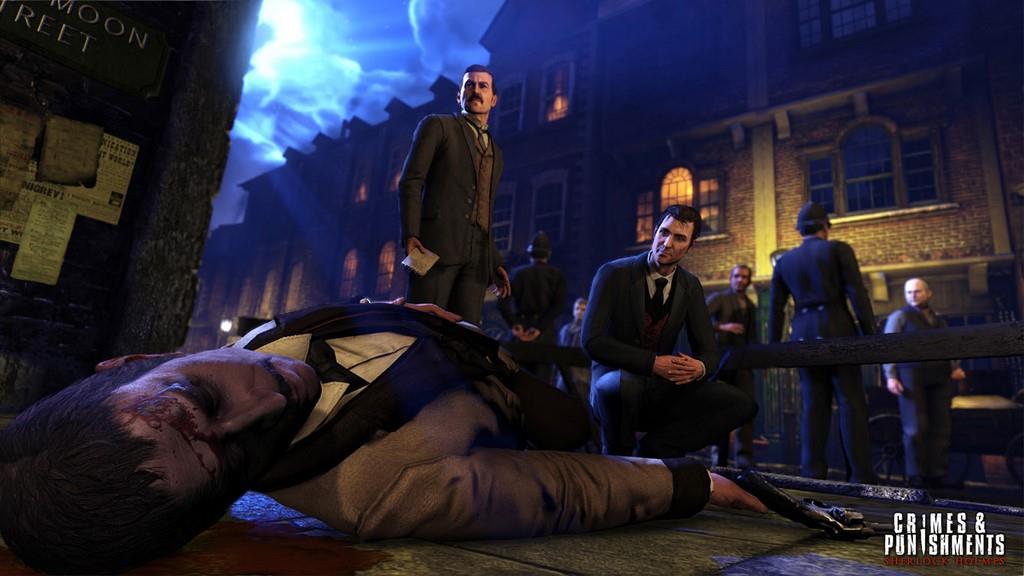 Written by Ben Berry on 9/30/2014 for PC
More On: Sherlock Holmes: Crimes and Punishments

It takes more than a deerstalker cap and an “Elementary, my dear Watson” right before the case is solved to capture the essence of a Sherlock Holmes mystery. The setting, the dialogue, the logic, and of course the deduction and intuition of the master detective have to be fully on display with mysteries that Holmes would deem worth his time. Frogwares leaves us plenty of clues as to how arrived at Sherlock Holmes: Crimes and Punishments, which like Holmes himself is both brilliant and yet flawed.

Unlike the current TV dramas starring Holmes, the game occurs in his original setting, Victorian London, and surrounding areas. At least in the first few cases, you don’t see much of the city, and while the game gives you plenty of areas to explore, it’s not so much a single sandbox, so much as a series of small sandboxes where you have complete freedom to explore, so long as you stay inside the lines. The game doesn’t box you in graphically; every area appears to be part of a much larger world. However, if you reach the edge of playable space, the map related to your current case pops up, allowing you to choose to go to another location (if a new one is available to you) or hit tab and return to your current location. This is annoying and leads to something even more annoying things that I’ll get to later on.

Of course, each of these cases begins with a cut scene. These cut scenes lay the foundation of your next adventure, while also showing off the terrific graphics provided by the Unreal 3 engine, and the superb voice acting of Kerry Shale and Nick Brimble as Holmes and Watson respectively. In fact, it’s that voice acting and some of the storytelling behind it, that helps overcome some of the technical flaws that mar an otherwise very good game.

Once you’ve finished the case introduction, made some snide remark to Inspector Lestrade, and told Watson what’s up, you’re off to start solving the case. Controls are the typical WASD for movement and mouse for the camera, with both 3rd and 1st person views available. The skills Holmes (and sometimes Watson) employs throughout the game are managed through a few hard coded keys, making controls simple to learn.

The game ships with 6 cases to solve, giving the development team easy room to expand, while providing natural break points within the overarching story. The first one is about something that happened on a whaling ship a ways back that has had some nasty consequences for her captain. The second one involves a disappearing train and has multiple suspects with compelling motives for theft and murder.

Solving these cases happens much as you’d expect for Holmes mysteries, deduction arrived at through observation, experimentation, imagination, and logic. In fact, there’s a game mechanic for each of these. Observation comes through a special view that allows Holmes to use his “talent” of observation to find clues, whether examining a character in the game or the environment around him. Experimentation leads the player to follow click through some process in order to come to a clue. This process could be figuring out the order to combine chemicals or how to build an object that will help prove a theory. Imagination is just that, seeing what Holmes is imagining could have happened, which can lead to the next step of the investigation.

Finally, there’s the logic where solving a case really happens. In the “deduction space” that looks very much like what we’ve all seen portrayed as neurons making connections via mental pathways. Each clue when linked to another becomes a deduction. As each deduction becomes linked, more potential outcomes become available, until as you solve enough clues, a potential solution to the case is brought to light. 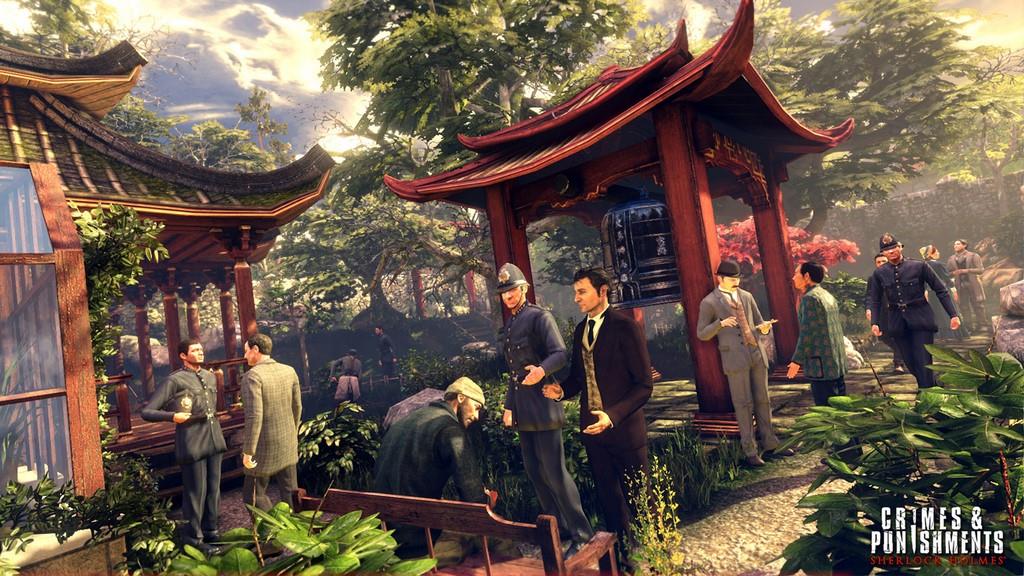 Here’s the genius of the game; when you’ve found all the clues, the game doesn’t tell you the solution. You’re left to make a decision based on what you’ve seen. Only after you’ve made a decision on the outcome, as well has how the lawbreaker should be treated. This is where the title “Crimes and Punishments” comes from, because you’re not just looking for the guilty party, but you’re also responsible for making a “moral choice”; one that can have a broader implication on the game as a whole.

Voice acting, character design, graphics, dialogue as well as about half of the 6 cases are truly up to par for what a Holmes game should be. Sadly, there are some significant flaws the genuinely impact the feel of the game.

The biggest of these flaws I hinted at before; load screens. Every time you leave one area for the next, you encounter a load screen that lasts between 30 seconds and a minute, or occasionally longer. These load screens put you in the same situation, riding in Holmes carriage with Watson. The developers were thoughtful enough to give you access to the case log, which is essentially your home screen while working to solve each case, as well as the deduction space so you can continue to look at choices you have while waiting. However, especially early in a case, these features have little or nothing to offer, so you wind up sitting there waiting, at the time you least want to be. Load screens also occur sometimes when viewing a character in Holmes “observation” talent, but those don’t last long, and are less of an issue as the wait to enter a new area. 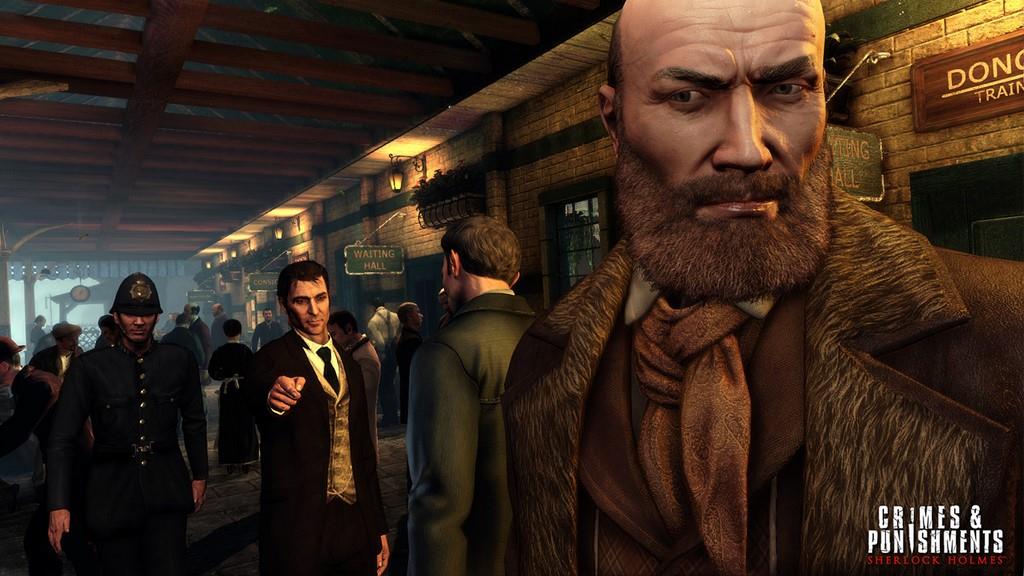 Additionally, while I recognize it’s a challenge to provider players a mechanism to detect small details within a video game, I feel like it was made far too easy. When observing a character there’s a small circle the player uses to identify important attributes, but instead of allowing the player to find them and then click on them to identify them, the circle lights up, giving away when an object of importance has been moused over. It takes away some skill from playing the game. There is a similar method used to identify items in the environment, but this is slightly less intrusive into the players perception of the clues.

The last major flaw is that of the 6 cases included in the game, 2 of them are straight out predictable, and within minutes of finding the first clue, you know exactly how this case will be solved. I pride myself on being observant, which is one of the reasons I’ve always had an affinity for the character, but 2 of the cases take no real deductive skill at all. There’s a 3rd case I go back and forth on, but I’d like to think I found it easy because I am observant. The other 3 cases are definitely Holmes caliber cases, and there’s one I have yet to solve correctly.

In conclusion, if you enjoy mysteries, Victorian London, or are a Sherlock Holmes buff, this is a game I’d recommend playing. However, if you like fast paced action, this is not the game for you.

Smartly written dialogue, strong voice acting, and terrific graphics help make up for some technical flaws as well as a couple cases of that would offer little challenge to Sherlock Holmes.  A must play for Holmes buffs, but it’s somewhat slow of pace so action seekers would be wise to look elsewhere.