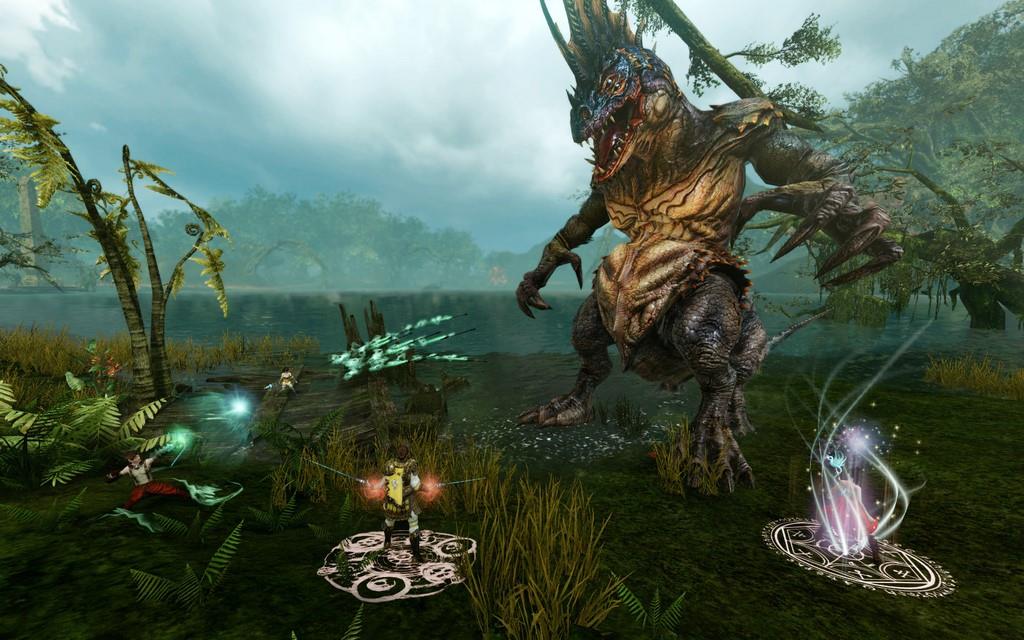 The phrase "free to play" doesn't carry with it the best connotations, from microtransactions and other premium advantages making games unfair for all players. ArcheAge from developer XL Games and publisher Trion Worlds fortunately avoids all of those issues and delivers one of the best free-to-play and massively multiplayer online role-playing games (MMORPG) that I've played this year. The sheer number of quests and various other activities to take part in continue to keep me playing into the early morning hours. ArcheAge, first released in Korea in 2013, has finally made its way to both North America and Europe last September. While the gameplay could first be described as a typical MMORPG, in that players select a starting class and then proceed to level their character by completing quests and so forth. However, as players level their characters, more gameplay elements reveal themselves in the forms of various mounts, crafting jobs, farming, fishing, cooperative dungeons, and the list goes on. With ArcheAge, the freedom of how to play is what sets it apart from other online games both free to play and subscription based.

The breadth of content within ArcheAge is astounding and nearly impossible to cover everything in a review. However, I aim to give you my thoughts on why it's so entertaining to play ArcheAge, in addition to spending so many hours on leveling my character and venturing across the game's various continents. Unlike other MMORPGs, ArcheAge focuses on the sandbox elements that make most single-player role-playing games such a rewarding experience. From buying plots of land for building houses to constructing ships for sailing the sea, there are numerous ways to play the game beyond the typical narrative quests. While I completed quests for the game's primary narrative, the actual stories and characters proved to be of little interest in other than completing objectives and reaping rewards. Instead, I focused on acquiring every quest possible from various characters in villages and surrounding environments. It didn't take long before I became distracted with raising my own horse mount, followed by planting various crops for harvesting and selling to market.

After selecting from typical fantasy races and classes, your character spawns in their specific continent and is then provided a basic set of quests to get accustomed to the narrative and gameplay mechanics. The quest structure is smartly designed in that they showcase the game's various environments in addition to providing the player with basic land, sea, and air mounts. Along the journey, additional quest givers can be located all over the game world to provide quests ranging from the typical kill this number of monsters to helping a farmer plant crops. Even if most of the quests aren't particularly interesting, it's impossible to ignore the lure of more gold and possible loot items. In regards to loot, it's one of my complaints with the game in that the various sets of armor and weapons aren't that visually distinct and doesn't provide much unique customization. However, it is noteworthy that mounts can be customized with armor to provide protection in battles. Mounts can even level along the player to allow for new skills such as enabling mounted combat.

As players level their characters, a range of skills and associated skill trees become unlocked that enable even further customization beyond the starter class. My character initially focused on sword-and-shield combat and then developed into an archer, as well as lute skills for healing and buffing teammates. ArcheAge does a great job at providing players with an endless amount of quests and activities to complete, ensuring there is always some way to further level your character. Once I had reached level 10, my quest list had grown unwieldy and required a scroll bar for viewing the complete list. Every time I log into the game now, I'm glad to know there is always something next to check off my list of quests. In between quests, I often ventured into the game's massive environments that range from a variety of locales from rolling grassy hills to sun-drenched deserts. One particular gameplay element that I quite enjoyed was being able to navigate my own boat around the rolling waves of the sea.

ArcheAge utilizes CryEngine 3 to great effect, with visuals that are astounding for a free-to-play MMO. From stunning mountain vistas to moon-covered seas, the game is a visual treat to behold during gameplay. My only issue with the game's presentation is that the soundtrack wasn't particularly interesting and didn't contain that many tracks for variety through hours of extended gameplay. Some of the in-game characters also still spoke in Korean which was odd when their dialog text was in English. Sound effects also didn't seem overly polished and lacked depth in the game's overall scope. Other then those minor presentation issues, my other gripe with ArcheAge was an overall lack of guidance in how to go about tasks, such as buying land or constructing a boat. The basic role-playing elements were easy to pick up, but the game's more advanced sandbox elements often had be researched online to fully understand their mechanics.

There is no shortage of free-to-play games, but unfortunately many of them focus on advertising microtransactions or locking content behind pay gates. While ArcheAge does contain a store with premium items, they aren't essential to enjoying the numerous gameplay elements. ArcheAge earns a high recommendation for fans of both online and single-player role-playing games in that players can journey by themselves or join others for cooperative dungeon instances and player-versus-player activities.

ArcheAge is one of the best free-to-play games to be released this year, with a near endless amount of content awaiting eager adventurers. While ArcheAge could strongly benefit from further guidance on more advanced gameplay mechanics, the overall experience -- from completing numerous quests and crafting tasks to sailing a boat or flying a glider -- are simply too entertaining to miss with the game being free-to-play.