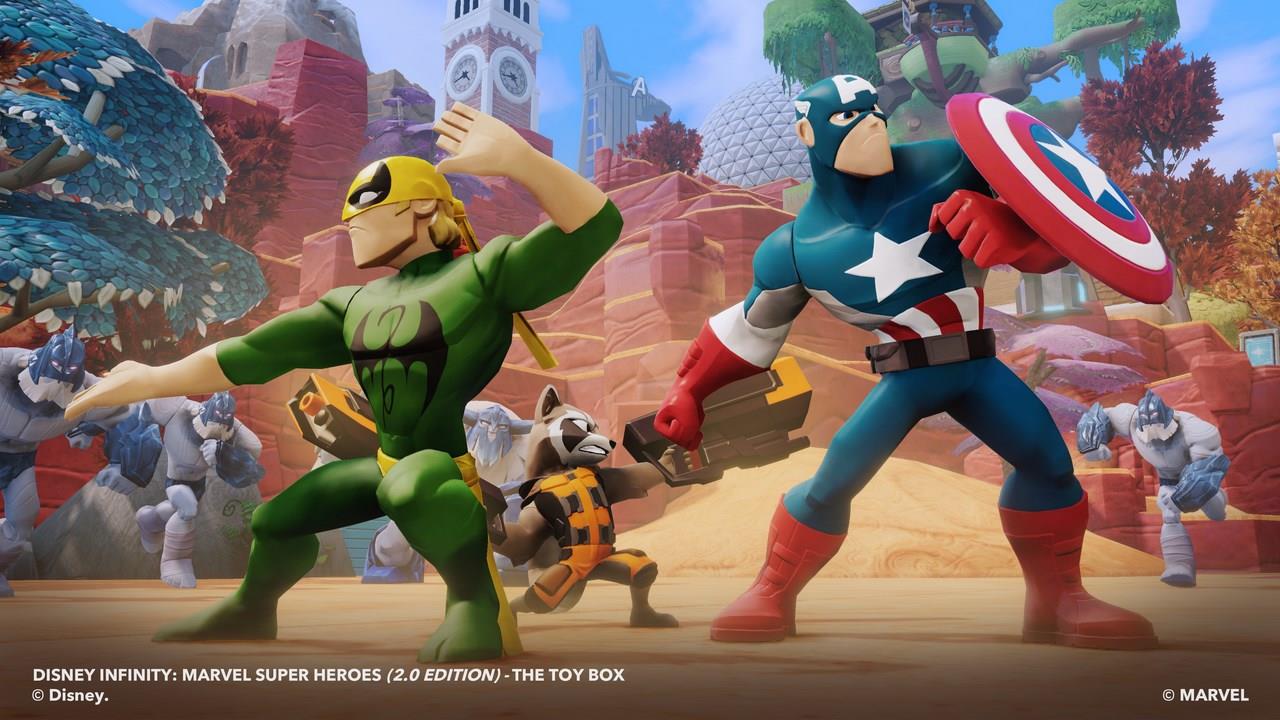 I have a confession to make: I have an addiction. It isn’t to drugs. It isn’t to alcohol. It is to games that involve figures. Be it Disney Infinity, Skylanders, or Nintendo’s upcoming amiibos, the concept of having them all fascinates me and I won’t stop until I collect them all. When I saw that the next installment of Disney Infinity was going to focus on Marvel comics, my heart almost melted. The idea is ingenious and it brings out the kid in me.

The original Infinity is a game that I play a lot of with my daughter still to this day. She is as big of a Marvel comics fan as she is Disney, so she was just as excited as I was when I showed her what was coming. Although we played a lot of Infinity, I had hopes that many of the issues that I had with the game’s accessibility for her would be rectified with the new release. Now it’s here and while most of those issues have been addressed, there is still room for improvement with the franchise and the ability for anyone to pick it up and just play.

The adventure portion(s) of the game feel much more fleshed out and enjoyable than any of the Disney adventures were in the first release. The original game seemed to have some playset stories that were way better than others. Pirates of the Caribbean in particular, really stood out above the other available sets. This time, at least with the first three sets available, they are all extremely solid offerings. The characters are used better and the stories feel more fleshed out than ever before. The writing is a big reason for that as it is much, much better this time around. The Marvel stories have been penned by famed comic writer Brian Michael Bendis. If you don’t know, he is basically THE MAN when it comes to modern Marvel comics with work like Ultimate Spider-Man, the House of M, and All-New X-Men. This man knows these characters and their worlds and that shows through with the adventures, even if they are toned down a bit for the younger audiences.

The characters, although a little more “cartoony” than the usual comic book presentation, really take on their patented personalities. When I call them cartoony, I mean it more in  a Super Hero Squad sort of way. The humor is a little more slapstick and family friendly than you might see in the Marvel movies or comics, as is the violence (fighting). Remember, the core audience here is pretty young and the developers definitely kept that in mind every step of the way.

The characters are also much more fleshed out too in terms of their variety and abilities. These are super heroes after all and it makes sense that they have a variety of abilities and powers. Rather than them having a few random abilities, each one has a fully, fleshed out skill tree that you will upgrade over time. The added skill trees add a ton of variety to the experience as you can sort of build the powers up based on your playing style. Me, I like diving straight into the action so everything went straight to the powerful moves. However, when my daughter played, she was content with the basic moves so I poured all of her upgrade points into improving her life and defensive abilities. Even some of the older characters from Infinity 1.0 have skill trees now, even though they aren’t nearly as robust as the Marvel personalities. 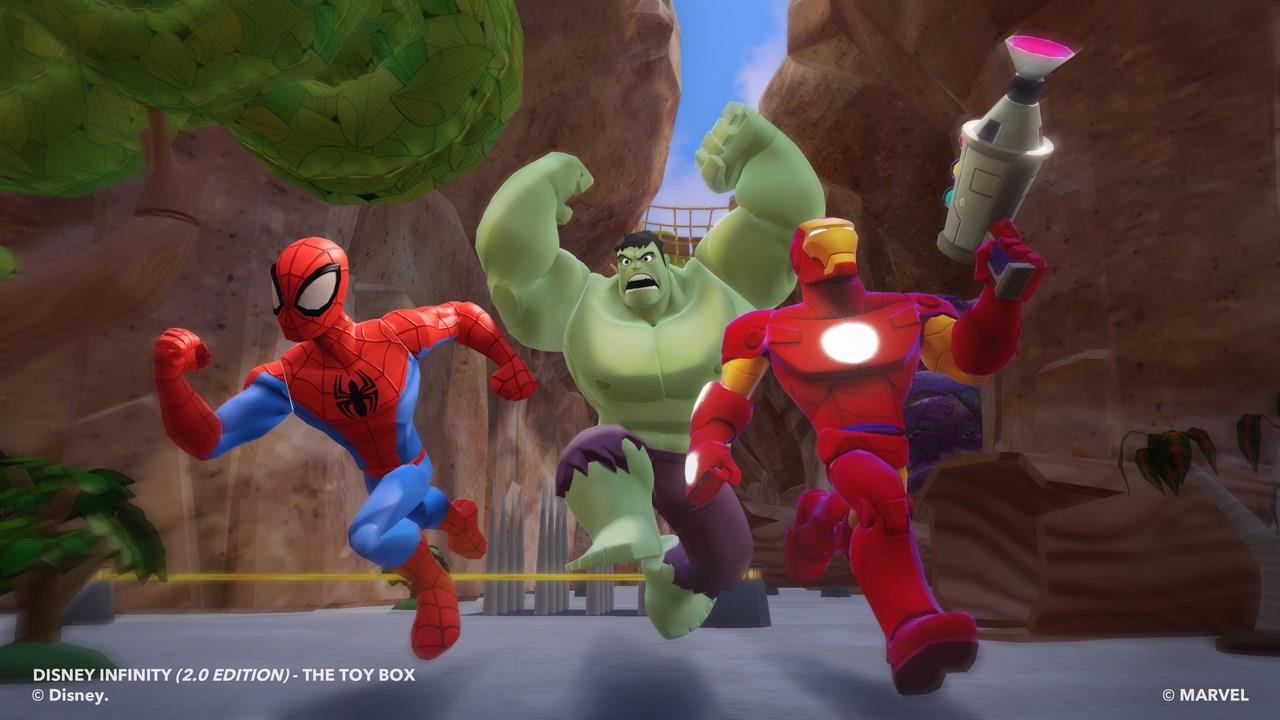 Even with the great story writing, the adventure does feel a bit straight forward. Personally, I didn’t have too  much of an issue with this considering the target audience, but I can see this being a bit of a turn off for more mature gamers. Things become very predictable and almost “by the numbers" in terms of the progression. You get some variation when you move into the open-world areas of the game, but the story-specific missions feel the same in each of the playsets I reviewed (Avengers, Guardians, and Ultimate Spider-Man).

You almost always have to solve a puzzle that requires supplying a power source or something open a door and move the next area. You then clear out the bad guys, rinse and repeat. Even the missions in the open-world portions get a bit repetitive. It is mainly about clearing out a certain number of bad guys or escorting someone / something from point a to point b. It is overly simple, but it is that way by design. Every time I start to complain about this personally, I look over and see how effective the design is for my daughter and am reminded that it is made this way for a reason.

Just like before, in addition to solving puzzles and destroying bad guys, there are tons of items to collect throughout your game. As you play through the adventure you will unlock parts for the toy box which add to your tools and pieces that you can use to construct your creations. You also find crossover coins, which let you bring in other (select) characters into the story, additional costumes, as well as in-game money to buy toy box accessories (and there are a ton of them). There is a huge push to revisit earlier areas of the game as your character earn new abilities in order to find everything that you can, which gives you a lot to do.

My biggest gripe with Disney Infinity remains how complicated things can be for younger gamers. Finding where to go and what to do isn’t that big of a deal, as the game (once again) has guidance options that can be turned on for assistance. The problem is the character management. The concept is certainly there, but it doesn’t have the same “plug and play” feel that makes the Skylanders series so accessible. It took a while to get my daughter to understand that she could be Captain America at this point in the story, but not Spider-Man. Or that she could play as the Hulk, but not Groot. It is only when you are in the toy box mode that you can swap characters without any sort of limitation but that mode also has a certain level of difficulty that requires adult guidance. There are “crossover” characters that can be unlocked, but those are specific characters that can be brought into the adventure, but again it is a bit complicated for children to follow. 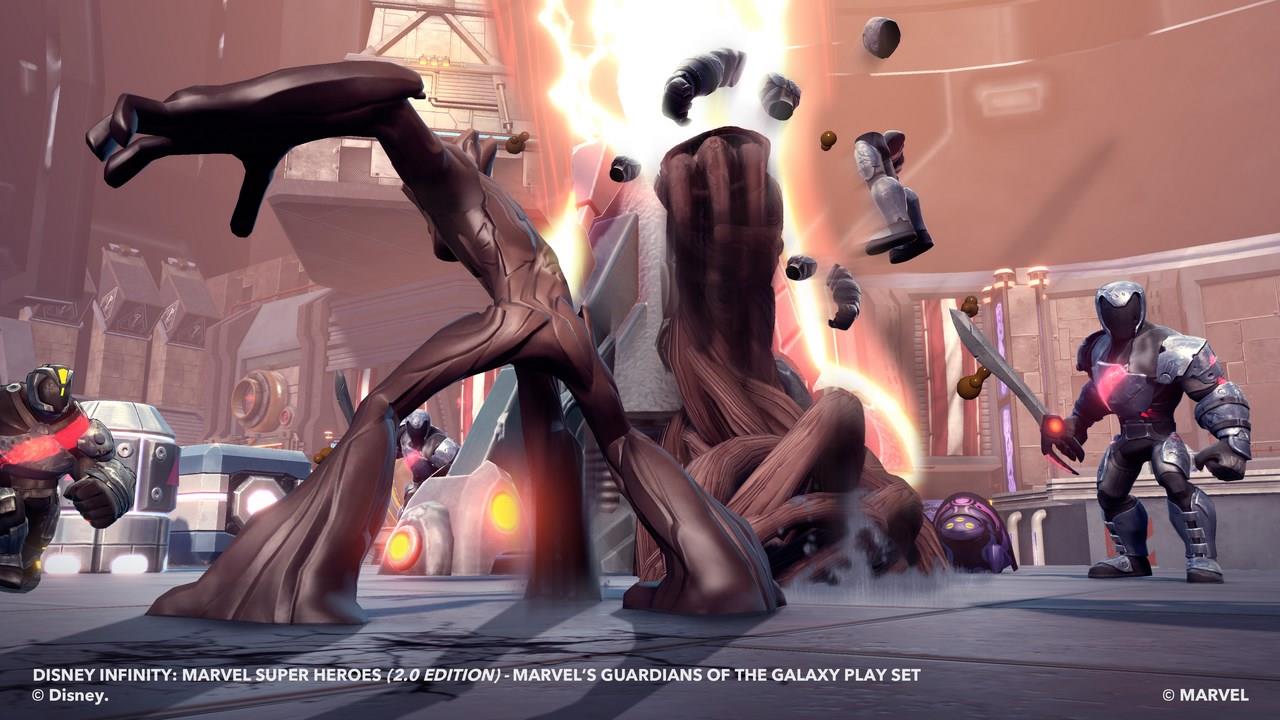 The complication of compatible characters doesn’t exist when you get into the game’s bread and butter mode: the toy box. This is where you can create, and share, you own levels and miniature game creations with the world. You can swap out any character or power disc at any time in this mode. Want to run around and destroy bad buys with Venom and Wreck-it Ralph go ahead? As a personal note, the team of Rocket Raccoon and Perry the Platypus deserves their own dedicated game after experiencing the joy of the two in tandem here.

Although things are much easier to understand from a character perspective, they do become complicated simply by the shear number of options that you have in the toy box. There are tons of toy and set pieces that you have access to, as well as general “things” that you can do that it can be overwhelming. Thankfully, there are options for simplifying things with tools that automatically generate themed worlds for you to explore, which you can tweak and alter as you see fit. It really creates a good balance and can actually inspire you as you play, perhaps eventually getting you to the point where you can create something completely from scratch.

Yes there is a bit of a learning curve with the experience, specifically for the younger gamers, but it is all really worth it in the end. There is just so much to do here that your little gamers will be occupied almost endlessly (and most big ones too). While the adventure sets (story mode) may be short lived, the toy box never ends. As soon as the fans start sharing creations online, it will almost be like getting new playsets on a daily basis (at no additional cost). Avalanche Software has done a good job at balancing the integrity of some of Marvel’s biggest names with the simplified-yet-deep world of Disney Infinity. As with most creation games (think: LittleBigPlanet), this is the type of game where the more that you put into it, the more that you will get out of it. So, as long as you are willing to put in the time and effort, Disney Infinity 2.0 will continuously give you something new to experience.

Disney Infinity 2.0 has made some big strides from the original release. There is a ton to do, especially when you dig into the toy box, which should keep fans occupied for a long, long time. Things are just a little complicated for the younger gamers to do all on their own.