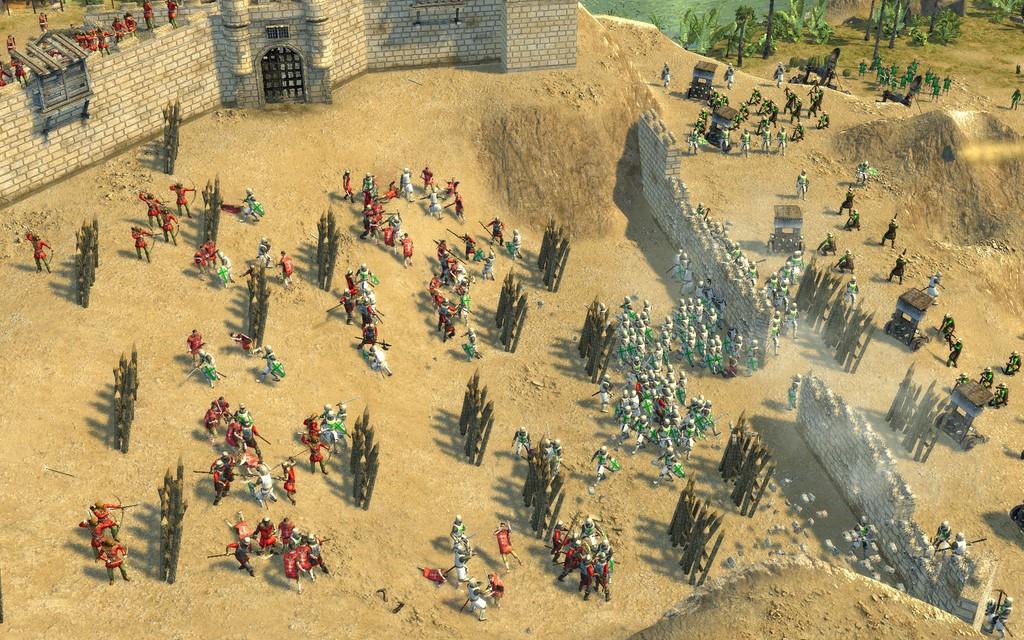 RTS games just don't rule the world the way they used to.  It wasn't all that long ago that it looked like the future of PC gaming was going to be an endless series of “Warcraft”, “Command and Conquer”, and “Age of Empires” clones.  It didn't quite turn out that way, and it is now obvious that the future of PC gaming will be entirely “Call of Duty” and “Medal of Honor” clones.

Well, not if Firefly Studios has anything to say about it.  “Stronghold Crusader 2” (SC2) is the sequel to the not-bad “Stronghold: Crusader” (we shall not speak of “Stronghold: Crusader Extreme”).  The Stronghold series has bounced around in the intersection of castle-sim and tactical battles for a while now, and it looks like SC2 has found a playable compromise between the two.

On the face of it, a medieval castle simulation sounds like a good idea.  On the one hand, there is an economy to run.  On the other, there are battles to be fought. The decisions driving play are the same as any strategic-level game – guns or butter – but on a smaller, more local level.  What is not to like?

The problem is that the kind of player who likes to build economies does not like to fight much, and tactical geniuses are bored building supply chains.  The key is to give both types of players enough of what they like, without forcing them to do too much of what they don't.  The Stronghold series is not unique in struggling to find this balance.

SC2 pulls out two tricks to try to make everyone happy.  On the economic side, the supply chains are short.  A set of three buildings (say, hops farm – brewer – inn) is enough to provide for most basic units.  More complicated (and powerful) units are generally built out of combinations of these simpler supply chains.  It pays to know what buildings are required for, say, Templar Knights, but there are benefits to creating your economy at every level.  This scheme allows fighters to get a basic army up and running quickly.  More patient planners can wait longer and build up a smaller yet more individually powerful set of units for their more fully-featured economy.

On the military side SC2 provides an almost-embarrassing selection of units with special abilities.  The manual claims that over half of the units have a special ability of one sort or another.  These range from the sensible “archers can fire over walls” and “pikemen can dig in against horses” to the more fantastic “healers automatically heal units within range” and “whirling dervishes have spinning attacks”.  There are also special vehicles such as the Hussite War Wagon, which act as armored personnel carriers so your guys do not get shot as they approach enemy castle walls. 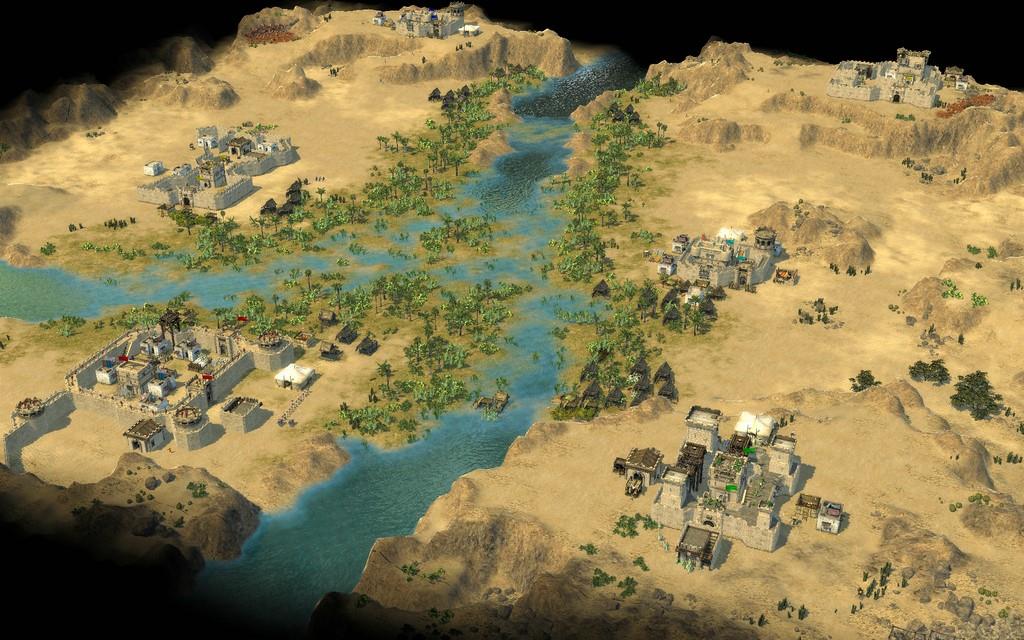 Even Mother Nature gets in the act.  Wait until a Locust Swarm crushes your farms, or a Lightning Farm lights your troops on fire, and you will realize that the enemy is not the only thing that wants you dead.

The basic mode of play is either build a castle and defend it; or attack the other guy's castle.  There is a decent amount of variety contributed by co-op play.  Between the large variety of units, attacking/defending/building, and co-op, the single player campaign will keep your interest.  The real point of the game is multi-player, however.  Even the single-player campaign tries to feel like multi-player, with varied enemy AIs that mimic various “real people” tactics.  A longer single-player campaign would have been nice, but expansions and user mods should make up for some of what has been skimped on.  RTS games have always felt more at home in multi-player in any case, and SC2 is no exception. 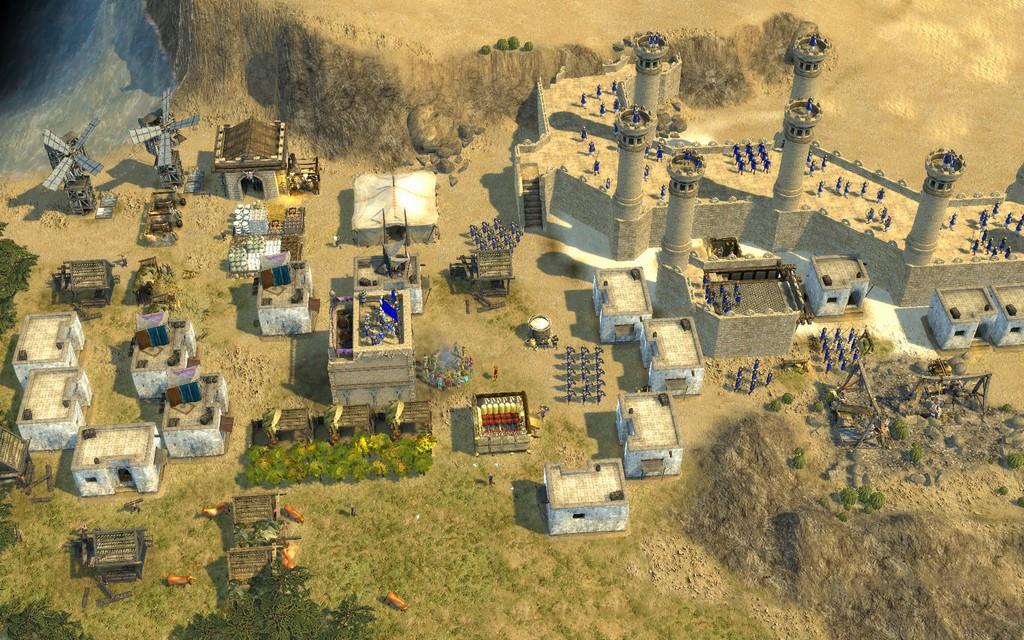 Each scenario, then, has more or less the same strategy – find out what resource is going to be the bottleneck and make sure you get it while denying it to the enemy.  Perhaps you need to besiege a castle.  That will take a lot of wood for archers, catapults and other siege equipment.  Trees are at a premium in the deserts of the Middle East (where a lot of the Crusades happened) so you will want to make an effort to secure that stand of trees over there.  Of course, that means swordsmen to fight off the enemy and hold the grove, so first you will want to mine the nearby iron reserves so your blacksmith can make swords.  They key to each scenarios is finding these sequences of intertwined economic and military objectives and forming a plan to take them.  Good scenario design can make these interesting problems – bad design makes them boring or impossible.  In the long run this game will rise or fall based on a combination of multiplayer popularity and scenario design.

The game was originally postponed 3 weeks to address some feedback provided from their beta test.  This is certainly good news in general.  Too many games seem to have a beta test and then ignore what was said.  However, there is still room for improvement in the copy this reviewer played.  There were still some minor-yet-annoying bugs (guys were caught behind walls, that sort of thing).  The biggest bug had to do with pacing.  For some reason there were times when all the units would move slowly, other times very quickly, while most of the time they were somewhere in the middle.  It made it difficult to react to fast-moving threats when one could not be certain how long it would take one's units to make it to the point of attack. 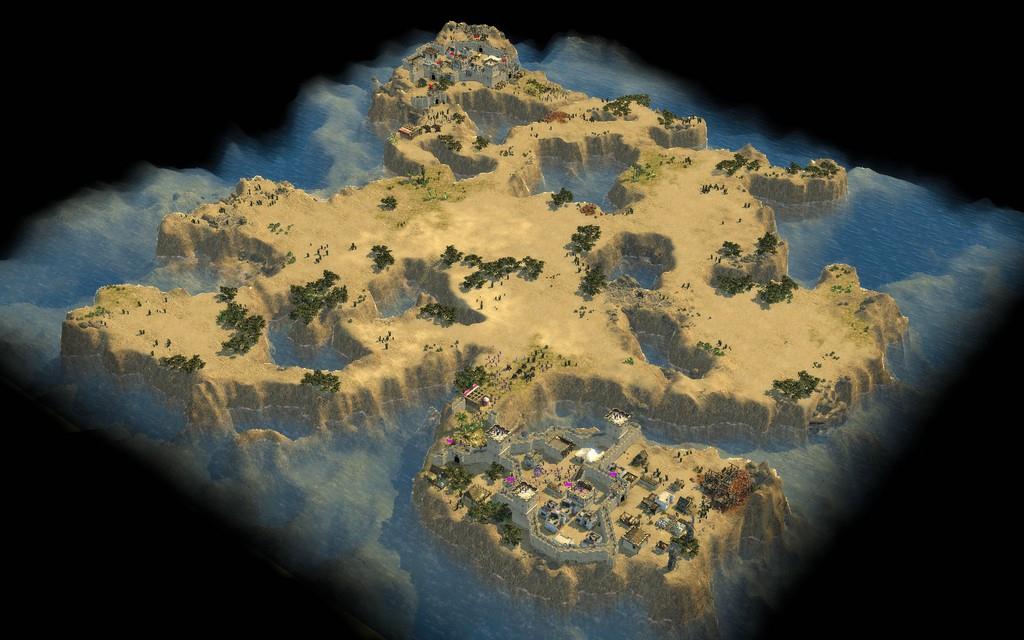 So what's not to like?  The graphics are nice, but to really play you have to zoom all the way out, at which point the unit detail is lost.  Even then the maps are so large that it feels like units are spending most of their time running from one place to another rather than fighting.  Some better unit automation options would have been nice – too many things that should have been set-and-forget required manual intervention.  Though the variety of different units would repay careful planning, the pace is too quick to really do enough preparation.

In summary, this is a solid medieval-themed RTS.  Building and destroying castles is just fun and neither the economy nor the battles overwhelm the game, allowing for a balance between the styles of play.  It should be a hit in multiplayer, especially with a co-op mode.

Does a good job walking the thin line between economy-sim and RTS.  Gives a good “build it and then knock it down” feeling with varied and colorful units.