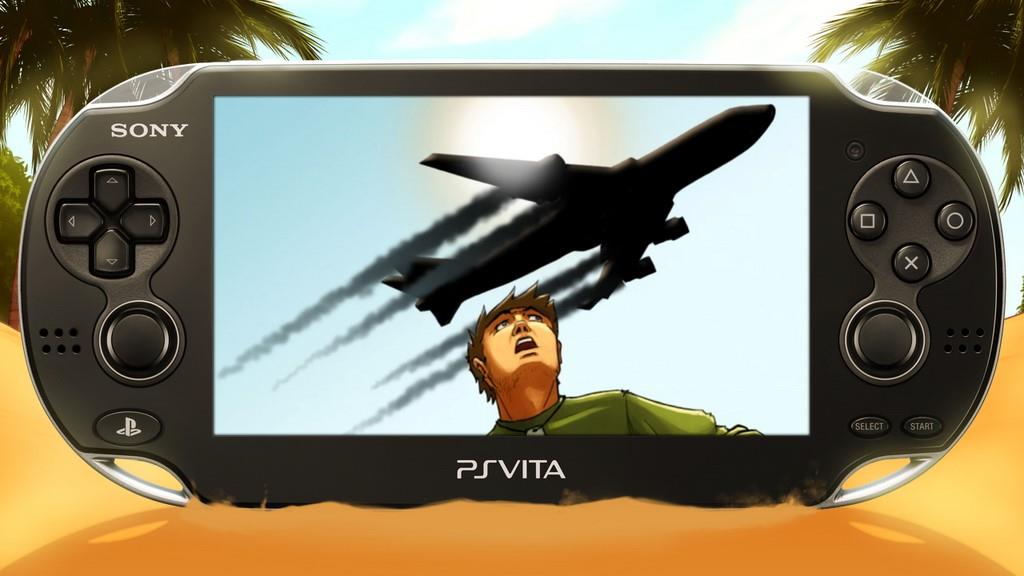 Although they've been popular on mobile platforms for a few years, the endless runner sub-genre is only now starting to make a presence on the PS Vita. Coming just a couple months before Sony's own LittleBigPlanet-themed entry is the curiously titled Run Like Hell!, a competent if uninspired endless runner that makes for a good starting point for those new to this particular brand of action game.

Before you ask, this Vita game has nothing to do with the 2003 science fiction adventure of the same name. Instead of listening to Lance Henriksen phone in a wooden performance, we're given a bright and colorful action game starring a guy stranded on a tropical island trying to rendezvous with his boat. Don't expect a leisurely stroll through one of the most gorgeous locations on the planet, because our marooned hero is being chased by cannibal islanders looking for their next meal.

You play Joe, the intrepid treasure hunter who must outrun the islands natives through 33 short stages. This adventure takes you on a complete tour of the island, which includes beaches, treacherous caves, lush forests and the ruins of an ancient civilization. Beyond looking slightly different, each of these locations has unique obstacles to overcome. For example, you will need to watch out for wrecking balls in some stages, while other areas feature angry women throwing pots that will trip Joe up. Slowing down too much results in our hero being captured, forcing the player to try that stage over from the start.

There isn't a whole lot to the gameplay, which shouldn't come as a surprise to anybody familiar with the popular genre. Our character runs on his own, so the player's job is largely confined to jumping and sliding. Each stage is full of obstacles that require our hero to make timed jumps and slide to safety. And while the level design is fairly simple, players will discover that there are a lot of different paths they can take to the finish line.

Although the gameplay is simple in design, Run Like Hell! does require skill to make it through all 33 stages. Our hero slows down while climbing, so a lot of the strategy involves deciding when to take jumps and which paths are the fastest. There are items you can pick up that will either slow down the cannibals or speed up the player, but that won't help much if Joe is constantly tripping over objects and forced to climb tall statues. 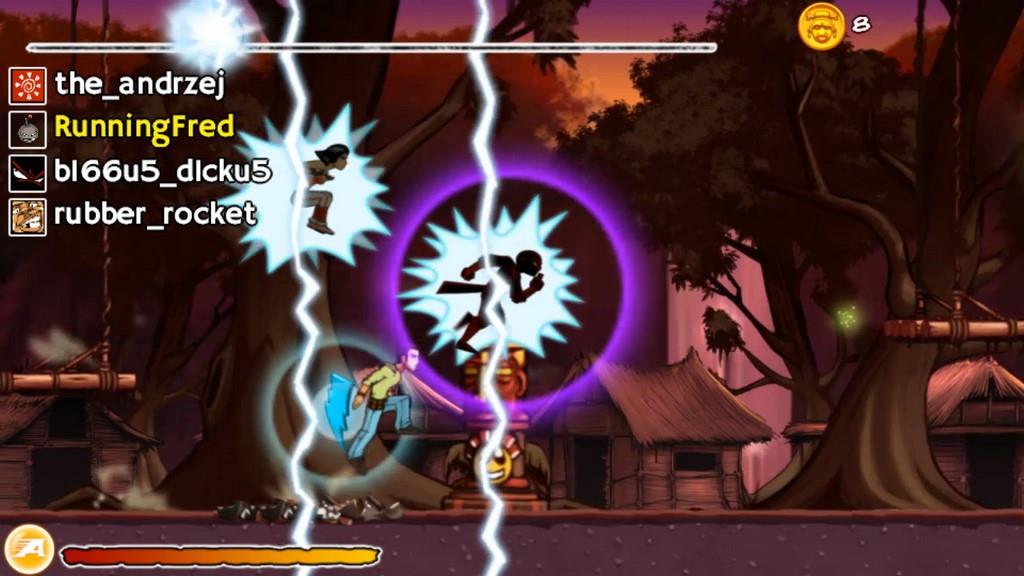 Occasionally the game takes a break from the usual jumping and sliding to focus on, well, running like hell. These stages involve players hitting the right and left shoulder buttons when prompted, which turns out to be incredibly easy. Although a fun diversion at first, I was disappointed that the developer didn't expand on this simple mini-game by adding new wrinkles along the way. This was a big missed opportunity.

While the single-player story mode (dubbed "The Great Escape") will only take a couple hours to run through, this game does offer a few extra modes to you busy. The arcade mode turns the game into a traditional endless runner, complete with coins to pick up and randomly generated stages. The goal is to make it as far as possible, with the game keeping track of your high scores. There's also a leaderboard, making it easy to check out how your friends are doing.

I was surprised to discover that Run Like Hell! offers a competitive online mode, but disappointed by the execution. Instead of playing directly against your friends in an online match, you're paired up with ghosts of other players. There are standard one-on-one races, multiplayer challenges, four-player bouts and even a tournament that requires 500 gold coins. 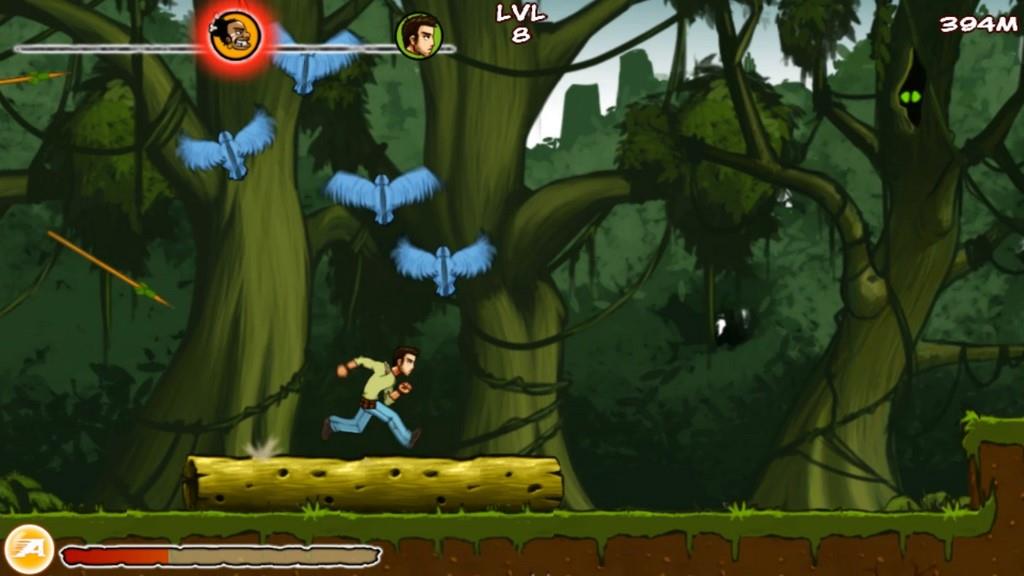 On that note, it's worth mentioning that Run Like Hell! is funded by microtransactions. Players collect coins by grinding levels or earning the 50 in-game achievements (which are not directly connected to the PSN trophies). But that's not the only way to earn points, because users will also be able to spend real-world money to buy extra gold coins. This currency is used to buy the bonus characters, which include a naked woman, zombie, ninja and parodies of Lara Croft (Tomb Raider), Faith (Mirror's Edge) and Nathan Drake (Uncharted).

The troubling thing is that you can also buy one-time perks for the online mode. This means that some players will be at a disadvantage in every race unless they spend the gold coins (or perhaps even real-world money). This is the ugly side of microtransactions and is one of the legitimate complaints people have with the free-to-play model. You can still have a good time with Run Like Hell! without even looking at the microtransactions page, but it may mean you don't spend much time in the online modes.

Sadly, the use of microtransactions isn't the only troubling thing about this game. For whatever reason, Run Like Hell! uses what some will likely view as incredibly offensive stereotypes that seem to be plucked out of racist cartoons from the 1940s. The cannibal "savages" are decorated with tribal masks, tattoos and large bones on their face. While I wasn't immediately outraged, I was certainly taken aback by what felt like outdated imagery. 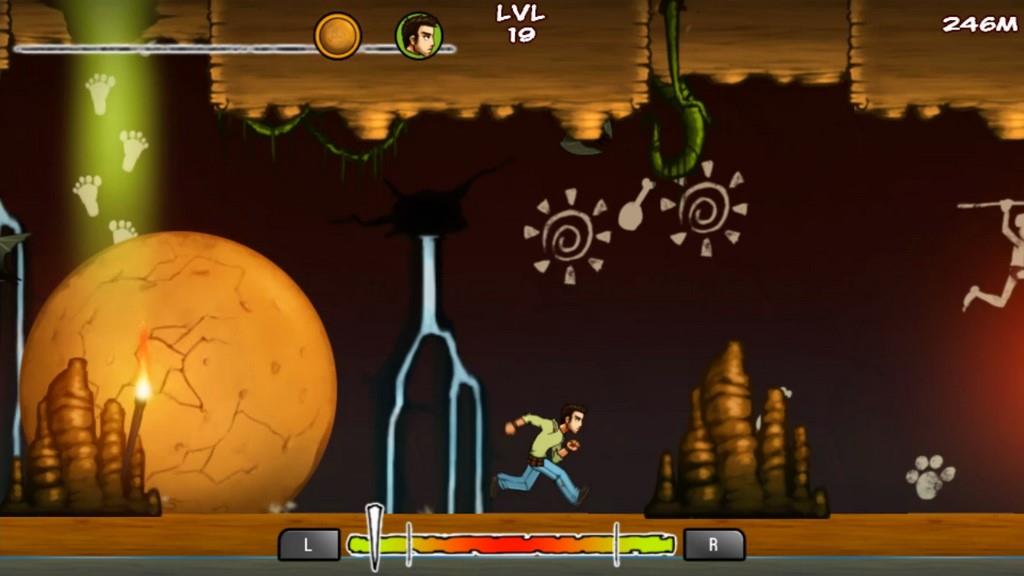 In the developer's defense, they are not an American company. Mass Creation is based in Poland, which likely has a very different history when it comes to racism in the media. Still, it's a shame they didn't choose a different enemy. It would have been cool to see a giant bear chasing our hero or, better yet, the smoke monster from LOST. At one point we do run from a yeti in the Himalayas, but that's not part of the story mode.

Stereotypical imagery aside, Run Like Hell! is a fair representation of the popular genre. It's the kind of game that is perfect for the PS Vita, as it works in both short and long sessions. I wish the story mode was more involved and the microtransactions were toned down, but this isn't a bad way to spend a few hours. If you're curious about endless runners, this is a good place to start.

Run Like Hell! is a fair representation of the popular genre. It does have some oddly out of place imagery but it's still a bit of fun.