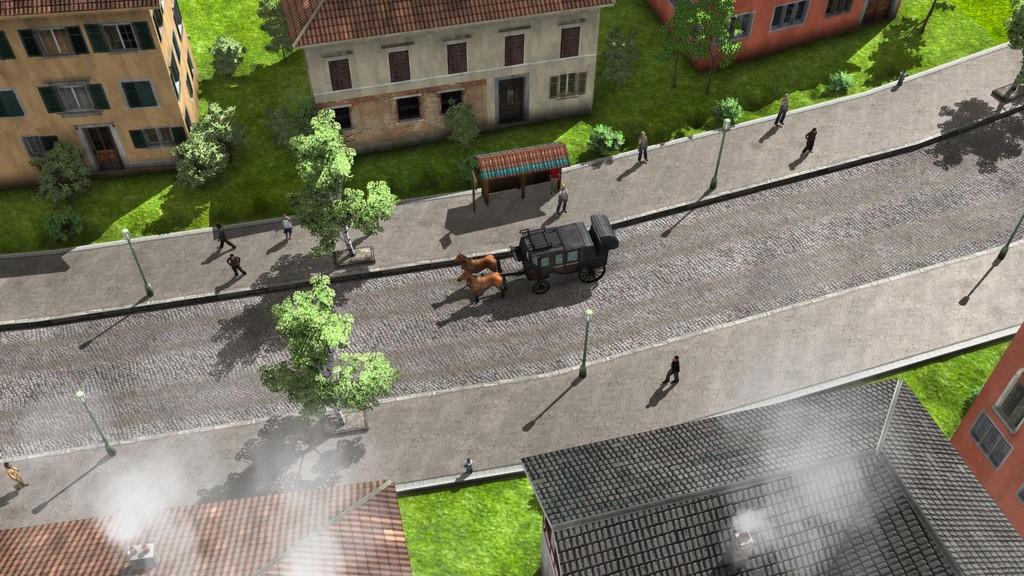 Train Fever, from developer Urban Games, has players beginning a transportation empire in 1850 and developing it over a range of decades with road, tram, and rail vehicles. The size and landscape of the game world is customized by players to either be small, medium, or large in addition to either flat or hilly. Each new game world is randomly generated in regards to its landscape and placement of cities which leave the decisions of where to start the transportation empire up to players. As decades advance additional vehicles are unlocked with electrical trains and such in the later years. Train Fever expects the player to ultimately decide on every action of where to expand to or what vehicles to purchase as there isn't any type of objectives or missions.

The gameplay progression of Train Fever isn't for those with a short patience as the years and decades take quite awhile to pass which in turn requires a major time commitment from players. Fortunately, additional beginning decades are unlocked including 1900 and 1950 for players that wish to start with the newer vehicle technology. The beginning towns will gradually transition into cities as the years progress along with newer technology such as cars appearing on the roads. Gameplay in Train Fever revolves around creating various passenger and cargo transportation lines via road, tram, and railway vehicles. It's up to players to determine the most profitable sources of income and create transportation lines around those areas, which ultimately may succeed or fail. Beyond the sparse beginning tutorials there isn't much help provided to players where random discovery and continual attempts are the only ways to learn all the gameplay elements.

The process of laying railroad tracks and other type of transportation lines such as trams can often become difficult due to the game's terrain system. New railroad tracks have a difficult time laying on top of the landscape and in turn often result in digging into the ground or refusing to curve through what looks like flat ground. The game engine always seems to be at odds with expanding rail or tram lines as continual menu popups of terrain conflicts with the game providing no solutions or hints of how to avoid them in the future. When the game does work without any issues it's a great feeling to connect two cities that span a far distance between each other. Even better, having a first successful delivery of passengers or cargo is highly-rewarding especially when producing profit. The other major difficulty during gameplay is the game's interface that pops up menus all over the screen with some often overlapping each other. Nearly every action in Train Fever always feels like a chore rather then an entertaining gameplay process with the odd menu system never helping the situation.

The major issue in Train Fever is the game's progression system which only focuses on profit and no other objectives. After reaching the year 2000, there isn't much incentive to continue playing other then continuing with maximizing profits which in turn don't provide any real in-game bonus or unlocks. The cities act more as backdrops for transportation lines and it's near impossible to determine if they're expanding or progressing in any meaningful way. While players can look through financial records and see which transportation lines are producing the most profit, there isn't anything else to work for in Train Fever other then passing time until additional vehicle unlocks. In regards to passing time, the game is painfully slow even at the fastest time mode which will certainly frustrate players either with limited patience or available game time.

While the game world and cities that populate it are highly-detailed, there aren't many visual effects to help create a convincing atmosphere. The game world doesn't feature a day and night cycle as well as any type of dynamic weather. Fortunately, the architecture of cities, reminiscent of European buildings, slowly progresses as the years pass with their inhabitants changing in clothes as well. In regards to performance, the game boots instantly and runs very smooth even with maxed graphics. There were no crashes to the desktop experienced during time spent with the game. The game was tested on a Windows 8.1 system with an Intel i7-2600K 3.40 GHz processor and GeForce GTX 680 graphics card.

Train Fever is a game with great potential that is often conflicted by problematic gameplay elements ranging from slow progression to lack of objectives. Fans of transportation management and simulation are sure to find something to enjoy in Train Fever especially with its complete freedom provided to players for expanding their empire of trains and other vehicles. However, Train Fever doesn't provide a welcoming experience to those new to the genre or looking for a more polished gameplay experience from past transportation management titles. Train Fever is only recommended to those that can look past its gameplay issues and have enough patience to overcome its slow progression.

Train Fever is available now through Steam for Windows, Mac, and Linux.

Train Fever is a highly ambitious transportation management game that unfortunately suffers from gameplay issues ranging from slow progression to a lack of objectives. Train Fever is only recommended to those who are strong fans of the genre, while other players are better off with more welcoming and polished games.