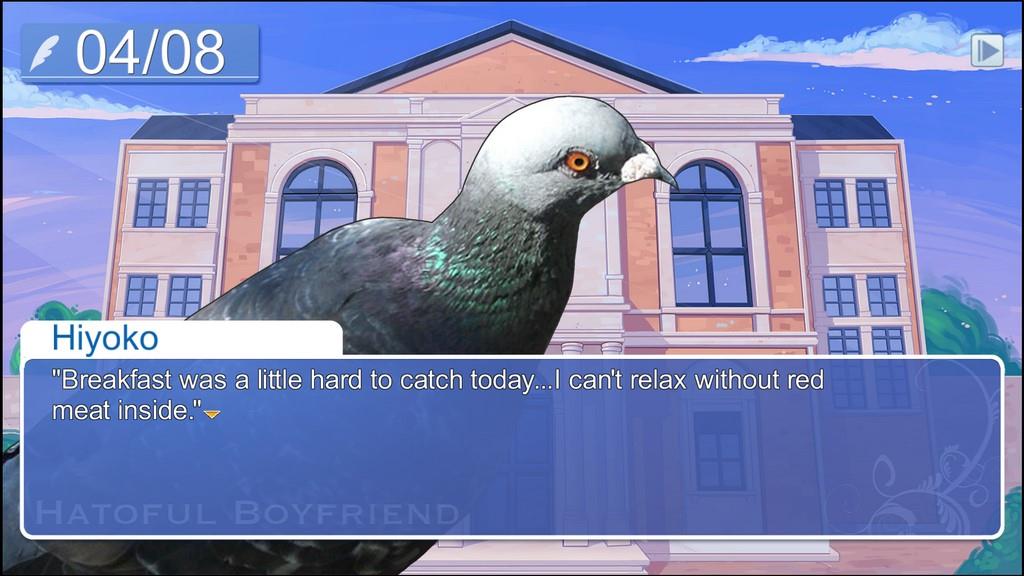 Written by Randy Kalista on 9/12/2014 for PC
More On: Hatoful Boyfriend

The word "Hatoful" is cake-layered with wordplay. "Hato," in the first place, means "pigeon" in Japanese; while "Hatoful" is a play on both "hateful" and "heartful."

The "Boyfriend" part of the game's title would lead you to believe that this is a dating simulator—and you'd be partly right. As a student in an all-bird learning institution, you choose branching dialogue options and unlock conversational storylines in order to romance whichever pigeon everybirdie thinks is the hottest.

All of that, however, is mere icing on this increasingly complicated relationship cake.

The entire premise is nuts. It's one of the reasons why Hatoful Boyfriend garnered so much attention, netting a plane ticket across the Pacific with this English-language HD version of the Japanese original.

So, OK, you're the only human female in a bird school. That's weird. You can initially visualize any bird as a regular anime character whenever you first meet them. Also weird. And you continually refer to yourself as a hunter-gatherer. Which is charming, but also weird. 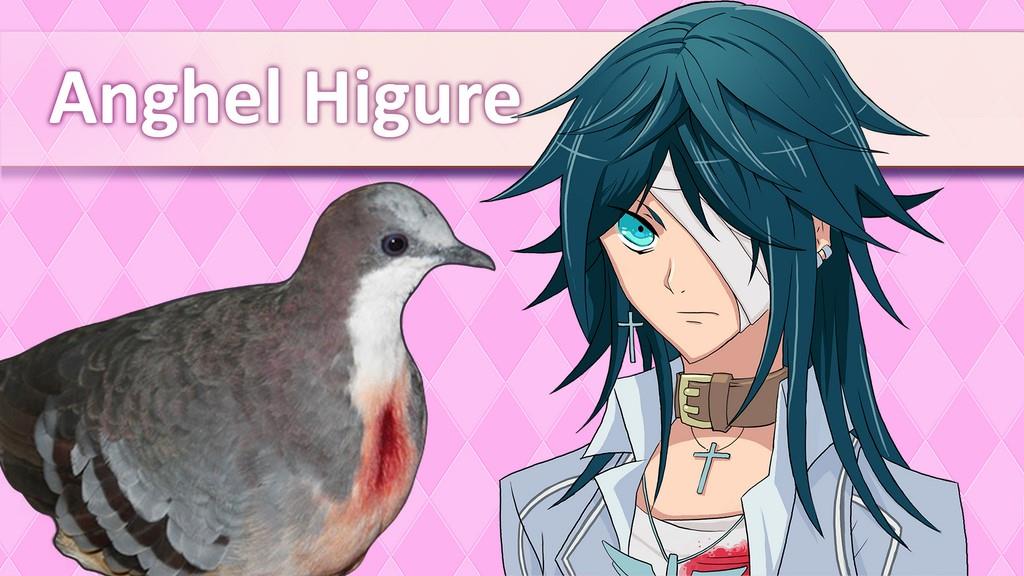 Hatoful Boyfriend starts during your sophomore year at the PigeoNation Institute. You traverse the halls and classes, meeting up with old friends, making new acquaintances and, possibly, bumping into a few rivals and outright adversaries. There are teachers both charming and creepy putting out a curriculum of art, science, and sports. You can even level up a rather arbitrary set of wisdom, vitality, and charisma scores, which ultimately affect three or maybe four lines of inconsequential dialogue.

But as you interact with the cast, bizzaro-world occurrences start clawing their way in. They'll make you tilt your head to the side with a questioning look on your face, but Hatoful Boyfriend won't necessarily address your curiosity right then and there.

For instance, yes, you're the only female at an avian educational institute. So, why is that? Also, you live alone in a cave. How'd that happen? For exercise, you go for a jog past temples, past parks, and then past ruined skyscrapers.

Wait, why is the city in ruins? The main character isn't ignoring these eccentricities, she's merely acting how a person would act who’s lived in this world her whole life. These things are all completely remarkable to a player, yet completely unremarkable to a person that's existed here as long as she can remember.

This is where multiple playthroughs piece the entire story together. Achieving the different endings by romancing different partners will assemble a patchwork of ghostly, dystopian, sci-fi, thriller, apocalyptic, disease pathology, murder mystery, and horror story elements. It's a suckerpunch of several fictions, mashed up under the guise of a pigeon-dating sim. Romancing two or three different birds doesn’t uncover even half of Hatoful Boyfriend’s story.

All of that is brilliant. The main character's dialogue is smartly funny at times—and outlandishly funny at others. But that’s aside from when she's simply pining over udon noodles, or carrying on about how much she likes tea, or being rather droll about forgetting her homework. It's helpful having some normalcy to anchor to in a story with so many quirks, but it also stunts a game that, for the first hours, is begging to go off the deep end. The first half, however, only hints at how weird it gets. 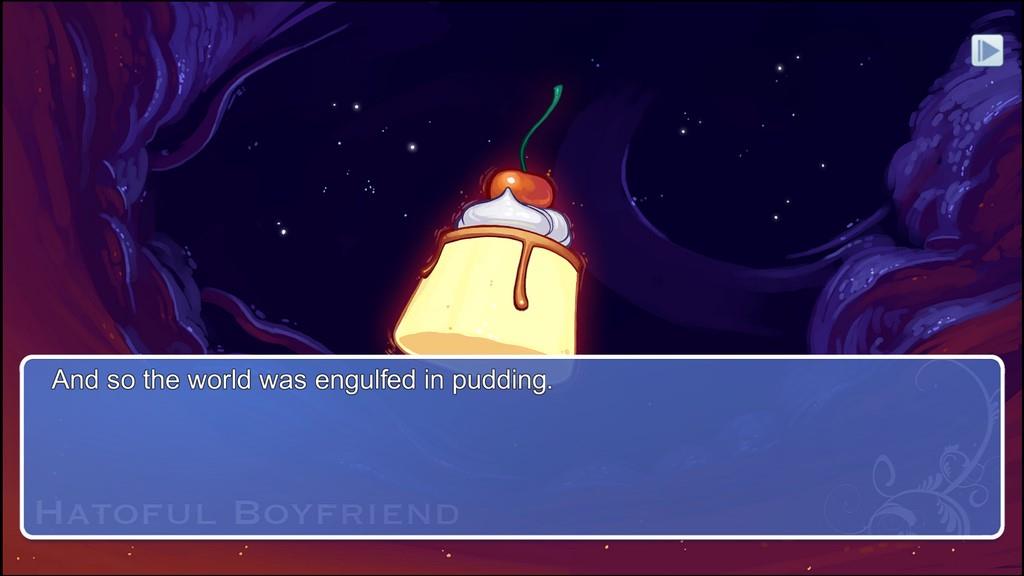 Again, the second half unlocks only after you've exhausted several dating options and seen them through to their heart-filled conclusions. Some endings are hopeful. Others are bittersweet.

In a smart inclusion from the developer, there's a button that, during your recurring playthroughs, fast-forwards through all the dialogue and stops when you run into a branching decision tree. The sad part of that fast-forward button's inclusion is that it had to be included at all. Expect to read through the dialogue fully on your first run, then to hit the Get-to-the-Good-Part button on all the others.

I know what you may be thinking: Is this pigeon thing some half-baked, tacked-on idea? Did they just write a normal Japanese otome visual novel and then replace all the artwork at the last second with pigeons? 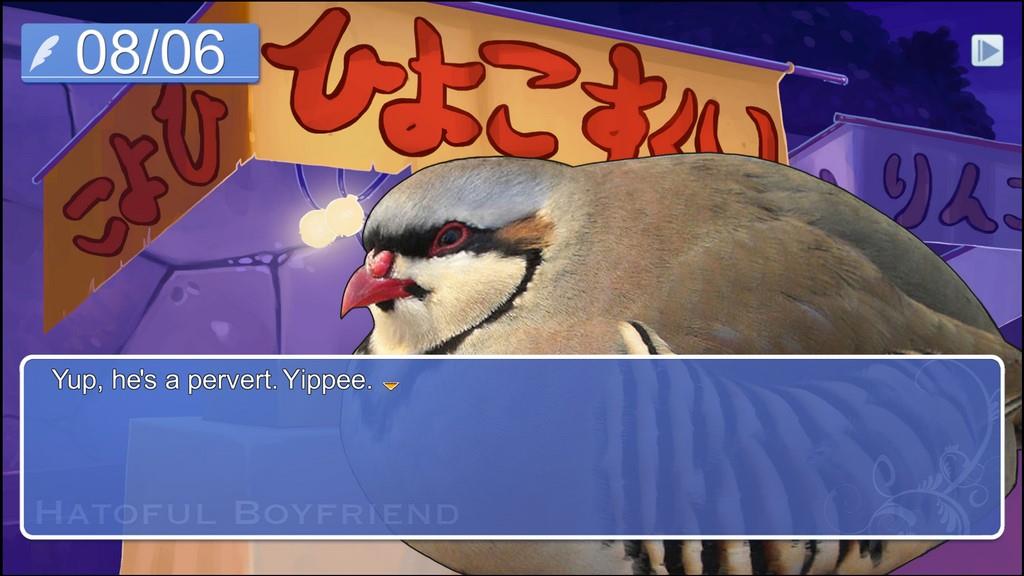 No, they did not. The birds, bird trivial pursuits, and bird-like behaviors are all integral to the storyline and interactions. As frightening of a proposal as this may seem, Hatoful Boyfriend was always going to be about the birds.

The world-building ramps up neatly in the first half. But the wheels fall off the bus in the second. That’s largely due to overwriting. There’s a murder mystery that starts off with such an act of brutality as to appear almost farcical. There’s a story of sibling rivalry so convoluted that it’s almost impossible to follow who was hatched from which egg. There’s a medical thriller headed up by a doctor that swings so far between coy and apathetic as to come off as robotic in the end. And there’s a doomsday trigger that’s so nonsensical you’ll wonder who signed off on including it in the first place.

Man, there are some zingers, though. Hatoful Boyfriend threw me for a loop more than a few times. I congratulate it for that. But I’m disappointed that the game shifted from an interactive novel to a virtual PowerPoint presentation of non-interaction by the end. There were a few branching choices to be made in the beginning. But by the time you unlock that overly complicated ending, the only branching option you have is to push the left side of the space bar or the right side. You’re no longer playing anything. You’re just reading. 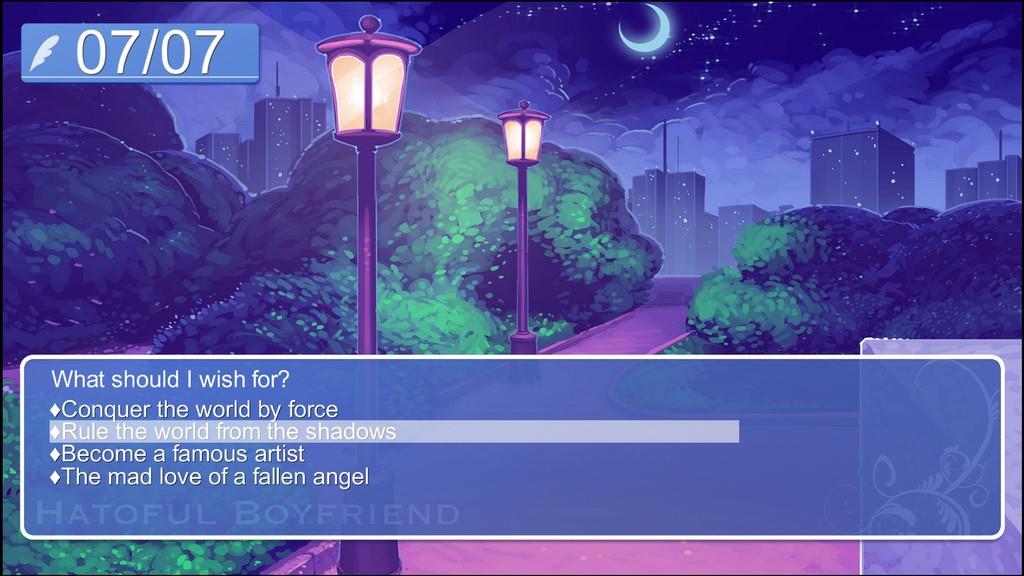 While you’re reading, the soundtrack flips through various instrumentals. They sound like Elevator Muzak versions of songs you can’t quite put your finger on. And then, during an elective math class or when you’re out running around the track, that you’re hearing a Girl-from-Ipanema version of Avril Lavigne’s “Complicated,” or a lite jazz rendition of “Eye of the Tiger.” Figuring out what long-lost radio hit I was listening to turned into a secondary game.

Hatoful Boyfriend is hard to recommend if you’re looking for an interactive novel. But it’s impossible to pass up if you want an eyebrow-raising story. Seeing stock photos of pigeons layered over empty Japanese animation backgrounds is great. I mean, that’s what brought us all here in the first place. It’s only major faults lie in overbaking its loose ends, never knowing when to quit when it comes to throwing in twists and turns, and completely forgetting how to be interactive in the second half.

Hatoful Boyfriend is not the pigeon-dating sim you're looking for: It's more than that. Curb your enthusiasm for branching storylines after playing through the early romance portion of the story. After you cross the point of no return, the game is out of your hands, and you're left with an on-rails storyline progression. Regardless, it will subvert each and every one of your preconceived notions of what Hatoful Boyfriend could even remotely be about.