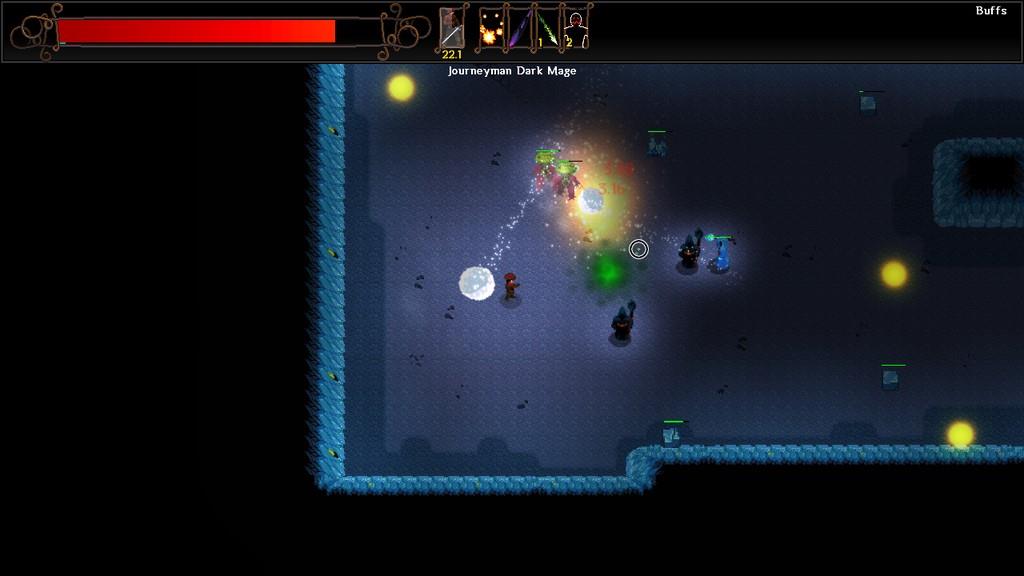 Runers is the first title to come out of Lets Get Kraken Games- a two man development team based out of Minneapolis. It made its debut on Kickstarter last year, but unfortunately failed to meet its $8,000 funding goal. Thankfully, that didn't stop the developers- on the final day, they announced that they would continue working on Runers even though they didn't make their goal. So here we are nine months later, and Runers is available on Steam for $9.99.

Runers is a roguelike dungeon crawler that looks like it's drawn a bit of influence from games like Gauntlet and Smash TV. Unlike those two games, it's single-player only, but it takes place in a ten-floored labyrinth that's full of monsters, mages, traps and all sorts of fun stuff that's waiting to rip you apart. You start your run by selecting a race, class, and starting spell. Your race gives you a passive bonus or ability that can wildly effect gameplay. For example, the Blessing of the Human gives you a small bonus to all of your stats, while the Blessing of the Efreet  deals fire damage to any enemy that touches you, at the cost of dealing slightly less damage with all of your other attacks. Your class gives you a potent active ability that's good for getting you out of a tight spot, like a charge attack or limited damage immunity, but they usually have a long cooldown time. Your starting spell isn't really that important, since you'll probably pick up enough runes to fill all of your spell slots on the first level. But if you have a specific build in mind, you'll obviously want to pick a spell that works with it.

The  core of Runers is collecting and combining runes to build and fortify your spell list. There are nine elements that you'll craft your magic from: Water, Fire, Air, Earth, Shock, Mind, Speed, Dark, Light, and Entropy. They each have qualities that carry over to the spells they build- Fire tends to create spells that deal a lot of damage, Entropy creates spells that are chaotic and unpredictable, Dark usually has a debuff associated with it, etc, etc. You can use a single rune to create a simple spell that's easy to spam, but the fun lies in combining elements into more complex spells. Why waste that Fire rune on a wimpy Kindle spell when you can combine it with a Shock rune to conjure a gigantic Molten Hammer? Just remember that you can't go combining runes willy nilly, you'll need a combiner in order to fuse them into a bigger, badder spell. The main problem with this is that you only find runes and combiners as random loot drops, so if you're trying to craft a specific spell you need to be very patient, or very lucky.

The leveling system is similarly random- it reminds me of the way that Badass Points work in Borderlands 2. Every time you gain a level, complete a challenge, or finish an entire floor, you get a random list of bonuses to choose from. Your perks can be anything from increased crit damage to a shockwave ability that activates when you're almost dead. It's cool that it gives you a variety of buffs and abilities to choose from, the problem is that it makes it difficult to build your character with a singular purpose in mind. If I'm building character that crits as often as possible, I could care less increasing the size of their spells. This is mitigated a little bit since you have a list to choose from, so you can try to nudge your character in the direction you want them to go. And it's not like it hurts you at all to have a shockwave ability sitting in your back pocket. But if you're the kind of player that wants complete creative control over your characters, you're going to have to accept the fact that every so often you'll be settling for something you didn't exactly want.

I hope that the developers have plans to add gamepad controls, because the way Runers' controls are set up, it's begging to be made into a twin stick shooter. As it is, you use WASD to move, mouse to aim, Left and Right click for your first two spell slots, with the rest of your spells assigned to 1, 2, 3, and 4. What's interesting is that you can autofire the spells assigned to your mouse, but not the ones assigned to the keyboard. So you can hold down both mouse buttons and fire off your quick spammy spells all day long, and save your big spells with long cooldowns for your keyboard. I'd personally prefer a 360 gamepad with the autofire spells assigned to the trigger buttons, but I really like that they set the default controls to mirror most RPGs and MMOs.

The gameplay is simple, but difficult. Like most roguelikes, you'll die over and over until you figure out how the game works, and then you'll die slightly less. But it's fast-paced, chaotic fun that you can easily pour hours into. But it's just as easy to pick up and play one floor at a time, since you can save after every one. I can't tell you how happy I was that I didn't have to the whole thing in one go. There are ten floors in all, with a miniboss every few levels and a big final boss at the end. There's also plenty of bonus challenges littered throughout with goals like 'protect the escort' or 'survive the arena' to mix things up between blowing up waves of monsters and playing with your runes. There's enough treasure in Runers to keep you coming back to the dungeon again and again, just to see how long you'll survive and what new spells you'll find to help you along the way.

This is a game that's three inches deep, but nine miles wide- and I mean that as a compliment. The gameplay and spellcrafting mechanics are easy to understand, and between of the sheer number of spells, races, and classes you can combine, you aren't going to run out of stuff to discover any time soon. And the good news is that there's a ton of enemies that will require you to find and master these spells as quickly as possible. If you're a completionist, Runers is a dream come true.