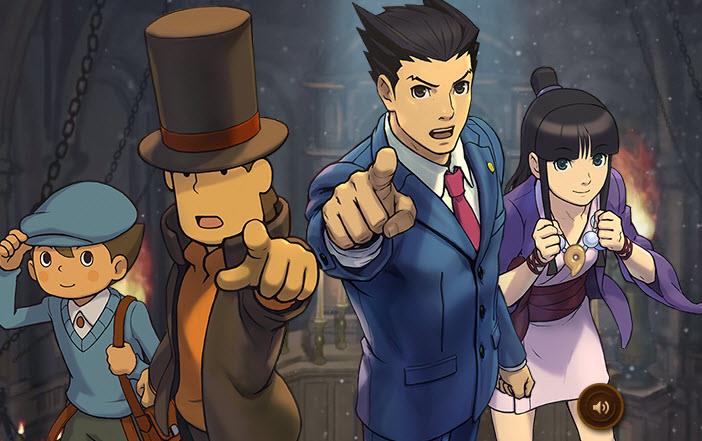 Written by Sean Colleli on 8/25/2014 for 3DS
More On: Professor Layton vs. Ace Attorney

Professor Layton and Ace Attorney—two offbeat series that began on Nintendo handhelds and found their initial success there. The professor got his start on the DS way back in 2007 as a mind-bending collection of Mensa-esque puzzles wrapped in a quant, Sherlock Holmes-style plot about a mysterious village. Phoenix Wright is even older; his first three games arrived on the Japanese Game Boy Advance between 2001 and 2004, and only made their localized American debut as DS remakes in 2005. These two series were born (and reborn) during the great era of DS innovation, joining quirky concepts like Elite Beat Agents and Trauma Center in a wave of bizarre, atypical genre titles that nevertheless found tremendous cult success.

A crossover between at least a few of these oddball series was, it seemed, inevitable; the only thing that’s surprising is that we’ve had to wait this long. Of course, the crossover we got is a little surprising too—my friends often joked that Ace Attorney should cross over with Trauma Center, with Wright defending Dr. Stiles in a malpractice suit. What we have instead is Professor Layton vs. Phoenix Wright, a game that in concept seems strange because of the drastically different art and storytelling styles of each respective series, but in practice works remarkably well.

Capcom and Level 5 have brought their two series together into a strange mixup that is at once complementary and a bit self-confused. The confusion comes mainly from the clashing storytelling and visual styles of each series. Professor Layton is basically a point and click adventure littered with brain-teasers, a Mensa book intricately grafted onto a quaint story in the best tradition of British mystery books. Phoenix Wright is a Clue-style, whodunit visual novel where who did what to whom is determined in a courtroom instead of an old mansion.

In spite of these differences, and the markedly different way each series’ characters are drawn, they apparently live in the same world. The game begins in London with Layton and his young apprentice Luke relaxing after their latest case, when a mysterious woman named Espella appears at their door. She is subsequently captured by what can only be described as a witch. Being the rational detectives that they are, Layton and Luke head off to find Espella and solve the mystery.

Meanwhile Phoenix Wright and his glib assistant Maya Fay are in London for an attorney exchange conference, when they’re roped into a show trial for none other than Espella. As Wright and Layton both get closer to the truth, they’re both sucked into a magical book, which contains the mystical town of Labrynthia. To get to the bottom of the mystery and escape the book, the Professor and Phoenix must put their combined analytical skills to the test.

While both characters are drawn quite differently, and the Ace Attorney series goes for goofball humor gags as opposed to Layton’s subtle British wit, the gameplay from each series complement one another beautifully. The best part from the Ace Attorney games is far and away the dramatic courtroom showdowns; the slower exploratory sections where you gather evidence in various locations has always brought the pacing of those games to a screeching halt.

Conversely, Layton’s games are all about point-and-click-style exploration. Your exploring is rewarded with clever puzzles and hint coins, not leads. In Professor Layton vs. Phoenix Wright, the Professor hunts out the juicy case details by exploring and puzzling, while Wright analyzes that evidence to tease out the contradictions in witness testimony. It’s a match made in heaven that sounds ludicrous on paper but makes perfect sense in play. Instead of just fanboyishly speculating “hey, wouldn’t it be cool if x character from x series met x,” the developers actually reasoned out which two series’ gameplay would play well against each other.

That said, fans of either series expecting the same level of challenge might be disappointed. Layton’s notoriously tricky puzzles have been softened a bit, with more mazes than spatial geometry challenges and word problems this time. Phoenix Wright is still pinning lies on eccentric witnesses, but with a new wrinkle in the familiar formula: this time, he’ll occasionally be cross-examining more than one witness at once. This adds more complexity to the court proceedings as each witness will play against each other, covering for or even sabotaging one another. A slip of the tongue from one witness might just be the detail Wright needs to really nail the other in a discrepancy, so you’ll have to pay close attention to both testimonies to wring all the pertinent info out of a case.

This adds a whole new layer of strategy to the familiar Ace Attorney setup but it can make some hearings drag on a bit and get stale. The zany witnesses are fun for a while, but after a time their outrageous personalities grated on my nerves a bit. This was also a little frustrating when I could clearly see where a case was going several steps before it dawned on Wright and Maya. The cases are as colorful and convoluted as any in the Ace Attorney series, but like the Layton sections, their difficulty has been toned down a bit as well.

When all is said and done, however, the gameplay really shines, especially set against the robust plot of the game. It couldn’t have been easy to meld the disparate worlds of Layton and Wright into one cohesive story, but Level 5 and Capcom managed it. The way they did it was to isolate the leads of each series and dump most of the attendant baggage, particularly from Wright’s games. The game starts in London so Wright is already off balance, but once all the players are in Labyrinthia the story really takes off in new directions. This may frost fans of either series, especially Phoenix Wright fans hungry for more fanservice, but I think this shift in setting really opens things up.

To be perfectly honest I was getting pretty tired of Detective Gumshoe, Edgeworth and the rest of Wright’s increasingly cluttered roster of obnoxiously goofy sidekicks and enemies. Maya is still around with her anime-standard tsundere affect but she isn’t quite as annoying or petulant here as she usually is. In any case, it’s cool to see both Layton and Wright totally out of their element, solving mysteries, hunting for clues and dueling in courtrooms in a world ruled by magical witches.

While the art styles clash a bit, nobody could argue that this game has superb production values. Flat, jerkily-animated portraits are out; all characters, from Wright and Layton to background players and witnesses, are smooth 3D models. The story is regularly portrayed through beautifully animated cutscenes—a mainstay of the Layton games but a first for Phoenix Wright—and while there isn’t full voice acting for every little conversation (there is a TON of dialogue in this game) the writing is punctuated by fully voiced interludes and pivotal scenes. For many fans, this will be the first time they get to hear the voices of Phoenix Wright and Maya Fay. Christopher Robin Miller returns to give Layton his signature English baritone, while the precocious cockney accent of Luke Triton is provided once again by Lani Minella.

If Professor Layton vs. Phoenix Wright were taken as a standalone entry of either series, it would probably rank somewhere in the middle in overall quality and challenge. It’s the fusion of these two stories and play styles, however, that makes this game much more than the sum of its parts. The magic is in all the little details that the developers got right; the character idiosyncrasies that the fans know by heart, or how Layton and Luke’s dialogue is spelled in British standard (“colour” vs. “color,” “tyre” vs. “tire”) while Wright and Maya speak with American spelling.

Simply put, this game is fanservice in the best possible way. It takes the flavor of each series and its best elements without going overboard with references or needless cameos, instead challenging its lead characters with a mystery than can only be solved by teaming up. Whether you love Professor Layton, Phoenix Wright or both equally, you definitely don’t want to miss this one.

You wouldn't think it, but the Professor Layton and Phoenix Wright series complement each other very well. This game is fanservice at its best: gameplay styles that work beautifully together, two iconic characters teaming up to use their deductive skills, and thankfully a lack of cameos and franchise clutter. While not as challenging or involved as the best games from either series, this is still a crossover fans of both Wright and Layton don't want to pass up.