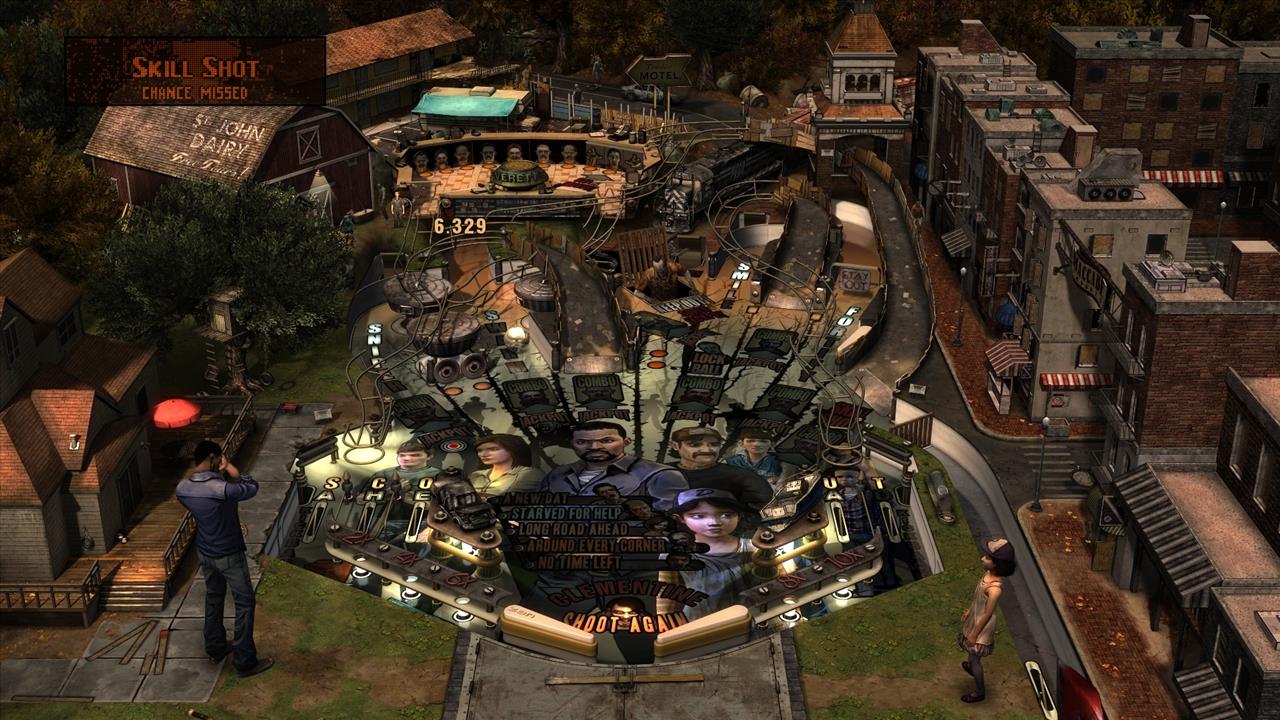 Let’s be honest, it was only a matter of time before Zen Studio’s tapped into the Walking Dead phenomenon. They have been pretty timely with their digital pinball offerings for their Pinball FX and Zen Pinball platforms, with a variety of Marvel and Star Wars tables, but this tie-in is long overdue. In an interesting move, the development team hasn’t just decided to tackle one of cable television and pop culture’s biggest franchises; they decided to focus specifically on Tell Tale’s amazing adventure-game interpretation of the series. The results couldn’t be better and might possibly have resulted in the best table they have created to date.

The Walking Dead Pinball covers the entire first season of Tell Tale’s series, so if you haven’t played through it yet but plan to in the near future, you might want to hold off. There are a lot of major plot points spoiled during the course of the table’s missions. All five of the original episodes are represented, morality choices and all. This is all done in the confines of a very rail-intensive table (which is something that I personally love) that is filled to the brim with assets and art from the original adventures. All of these rails serve a purpose, which is to replicate the moral choices that you have to face as you will need to meticulously target specific points on the playing field. The result is an ingenious table design that truly does justice to Tell Tale’s great work and shows that Zen fully understands the methodology behind their games.

As with most of Zen’s tables, the core experience with this one is triggering and launching missions within your game. In this case, the missions represent each of the five episodes from the first season of the game which you can select to tackle in any order that you please. You will see and hear a lot of familiar locales and voices as you revisit each episode. There are sections of the table dedicated to Herschel’s farm, the motel, and Lee’s family’s drugstore in Macon, Georgia. Zen worked hand in hand with Tell Tale for the creation, so you get the same look and feel of the series’ art style from start to finish.

More important than the look, the sound design behind the table really ties things into the original series well since the original voice cast has been used. From a sound effect perspective, it is relatively quiet, which really gives you a sense of isolation. Yo’ll get zombie groans and occasional, sudden gunshots that really keep you on edge. What you do hear a lot of however is dialogue. There are even segments of new dialogue included that were recorded by both Dave Fennoy (Lee Everett) and Melissa Hutchison (Clementine). 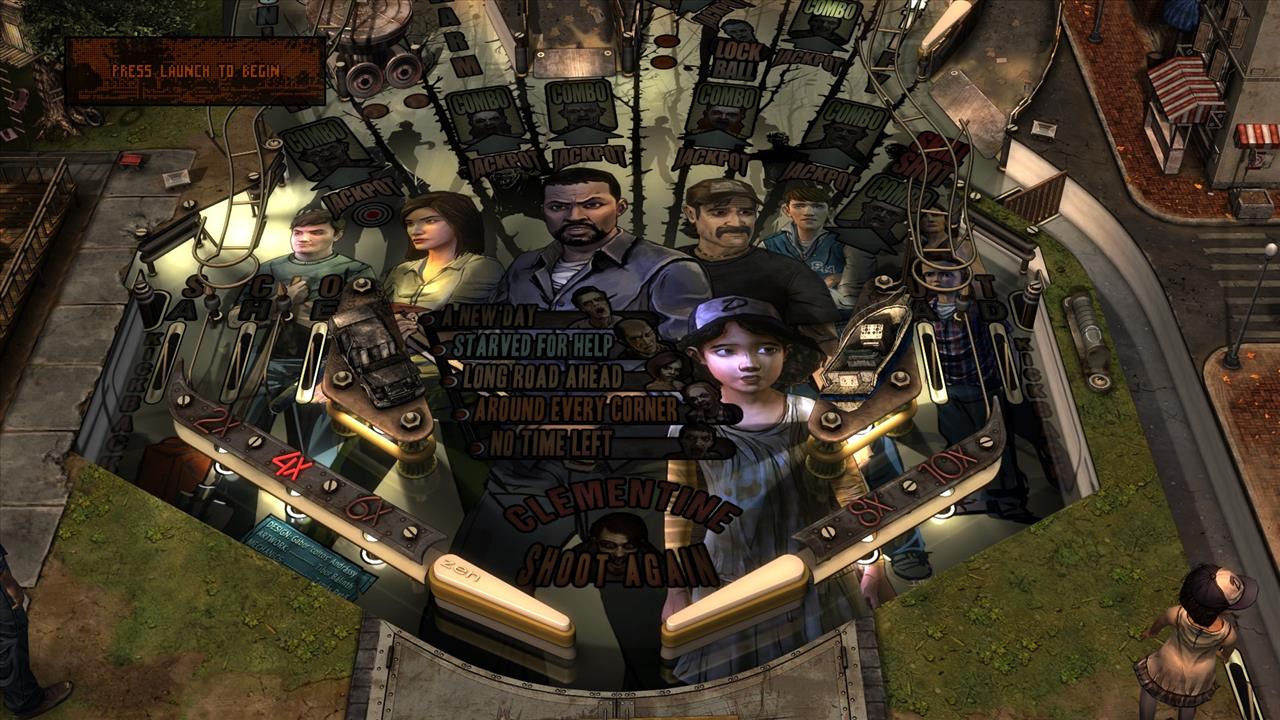 Being the main characters of the game, Lee and Clem are heavily featured on the table, with rendered versions of them interacting with each other at the bottom of the table. These are probably the most engaging renders I have seen in a Zen table to date, as you really get a sense of their relationship with one another, even if you aren’t familiar with the original game(s). Sometimes Clem will run across the table to hide behind Lee or during calmer moments, the two will kick a soccer ball between one another (a heartwarming moment from the series). The table really goes hand in hand with the episodic game and feels like it is truly a part of the franchise.

When you trigger a mission, or “episode” in this table’s case, you are given a moral choice of sorts based on the primary plot point of that given chapter. Depending on the choice that you make, you will then have to perform actions on the field with your ball (hitting spots, achieving certain scores, etc.). Some of them even offer extremely varied gameplay, which helps a lot to immerse you into the story and world. These go far beyond simply launching your silver ball across ramps and hitting specific targets.

There are times when it will switch over to a sniper mini-game that has you picking off walkers from a tower, or perhaps going hand to hand to fend off some undead invaders as you take control of the rendered Lee that is at the bottom of the table. This is one of the things that I have truly grown to appreciate with Zen’s table design: their willingness to go above and beyond what could be done on a real life table. This is the digital world and they take full advantage of that while still delivering the feel of doing it all from behind the flippers of an actual pinball table. That is more evident in this table’s design than perhaps any other. 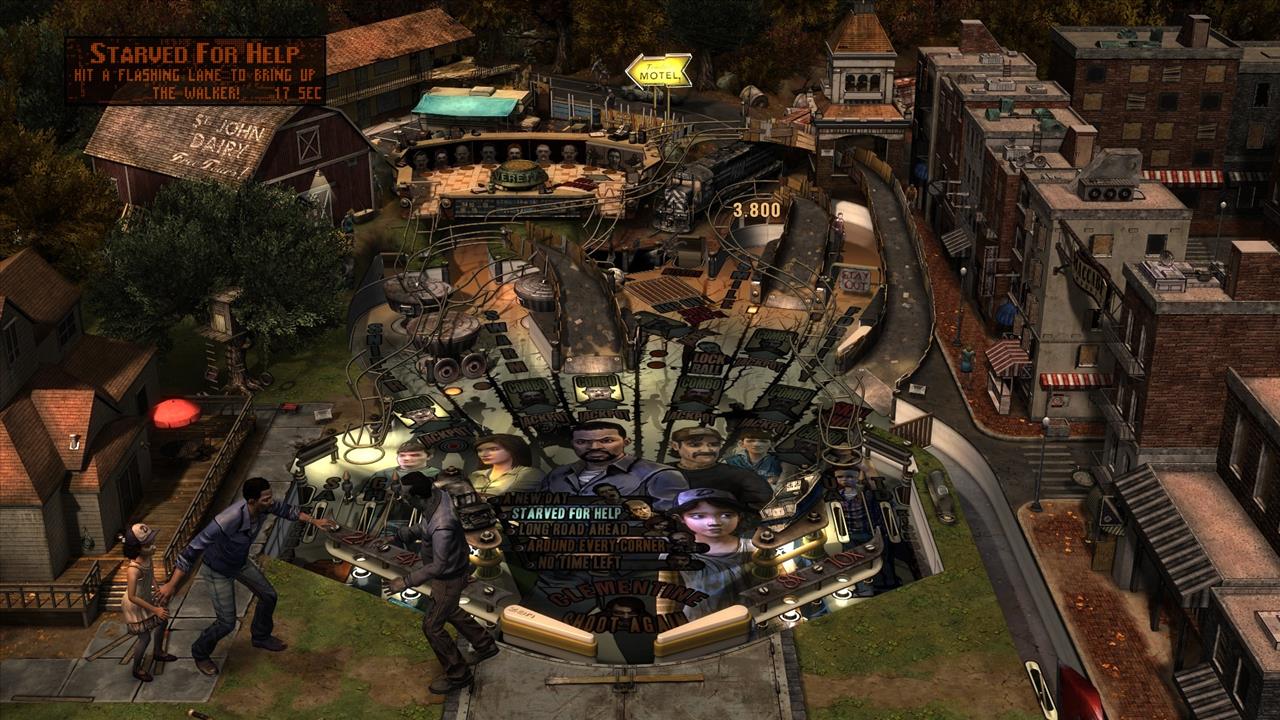 The only aspect of this table that I take issue with is the ability to tackle the missions / episodes in any order. While I understand this from Zen’s design perspective, it sort of serves as a detriment to learning the story. Then again, the purpose of this table isn’t to fill you in on the first season, but rather let you relive it from a different perspective. You really should be familiar with Tell Tale’s game before playing this one, in order to get the most out of it. I can see how annoying it would be to be forced to tackle them in a specific order considering the overall goal here, as with all pinball tables, it to simply set a high score.

While I have been a huge fan of nearly every Zen table that I have played, this is without a doubt my favorite to date. The development team has done an amazing job at replicating the atmosphere and experience of the adventure game within the confines of a pinball table. It looks, feels, and even plays with a sense of familiarity that is almost scary considering the vast differences in the genres (pinball versus adventure). Fans of both pinball and the Walking Dead will find a lot to appreciate with this one and shouldn’t hesitate to pick it up as soon as possible.

Easily one of the best tables that Zen has produced to date. Every aspect of this table captures the essence and spirit of Tell Tale’s adventures. This is a must buy for fans of Zen’s pinball platforms.