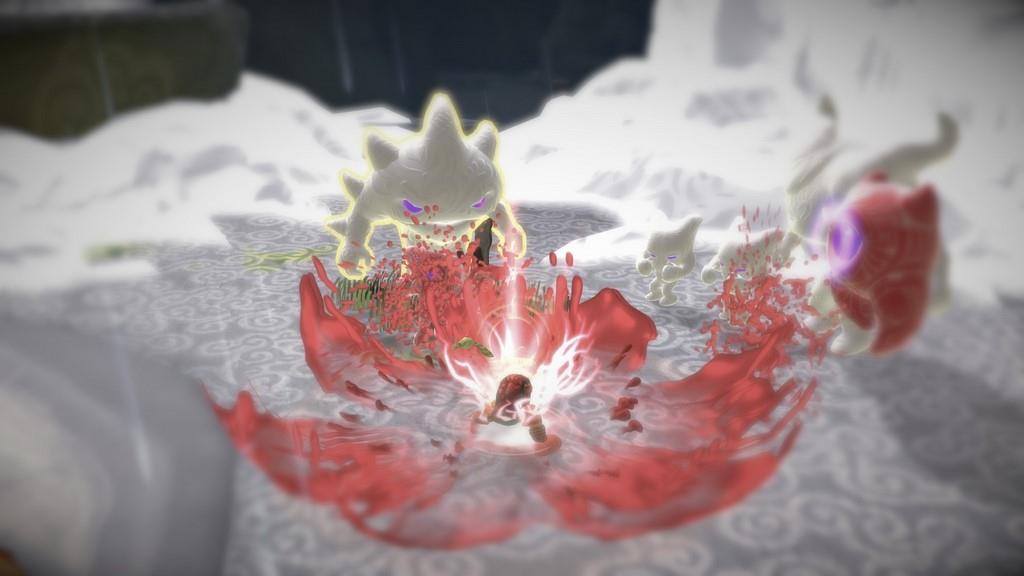 The Last Tinker: City of Colors

Written by Nathaniel Cohen on 9/5/2014 for PS4
More On: The Last Tinker: City of Colors

The Last Tinker: City of Color seems to be confused about its target audience. Consider that characters “speak” in the kind of unsophisticated noises you’d let a baby get away with—it’s all peeps and coos and waas—while at the same time, their actual dialog slowly scrolls by in word bubbles next to their heads. The sounds are for babies, the words are for early elementary school kids, and the gameplay seems to be meant for tweens, teens, and adults of all ages. So I’ll say again: The Last Tinker seems to be confused about its target audience.

Further deepening this issue is the fact that The Last Tinker’s art style is straight from a child’s pop-up storybook, the soundtrack is full of deep and wonderful melodies, and the story treads awfully close to the sort of biblical allegory adults have thought deeply about for a few thousand years. The Last Tinker is an odd game. It’s also a fun game, and yet a supremely annoying one.

The Last Tinker tells the story of Koru and his pal Tap. Koru is the only simian in a world of lizards, cats, mushroom men, and all other manner of anthropomorphic animal shapes drawn from a hat. Tap was sent straight from his last job as an extra in Viva Piñata. They live in Colortown. Unfortunately, Colortown has become divided among color lines and all color production has ceased. The reds hate everyone, the greens are scared of everyone, and the blues are sad that no one gets along anymore.

To make matters worse, each color’s spirit has gone into hiding. And after Tap is punched nearly to death by a local bully from the red district, a color spirit shows up and saves his life as a way to leverage Koru into helping put things right. Koru soon learns he's been had, and he’s actually tricked into allowing the bleakness into Colortown. Koru, of course, has to set things right and, lucky for him, he’s the mythical last tinker. Tinkers are individuals with the ability to wield the power of the color spirits. But first he has to find them and get them to agree to help.

To help them, Koru must master a style of combat that should be extremely familiar to any gamer over the age of 25. It’s your standard light/heavy/area/special-attack brawler. Koru has three different attack styles tied to the three colors: red does damage, green scares enemies away, and blue makes them so sad they become stunned. Koru can also perform a pretty standard roll-dodge maneuver. Basically if you’ve played a third-person action-adventure game at any point between about 1995 and 2008, you’ll be well acquainted with the combat. It may not do anything new, but it does work well.

The game does offer some gameplay variations from time to time. The most common involve mushroom men. These adorably dim-witted laborers offer a number of different puzzle-solving functions that you’ll get to fully explore throughout the game. There is also a reasonable amount of platforming. Outside of that, there are gems to collect and use to purchase upgrades to your combat skills and health bar. There are also paint brushes hidden throughout the world that are used to unlock galleries full of concept art from the development of The Last Tinker. Again, just like with the combat, there are no new ideas.

I mentioned that the game's art style reminded me of a child’s pop-up storybook. I don’t mean this as an insult. While I was initially very turned off by The Last Tinker’s childish aesthetic and overly saturated color scheme, it did eventually grow on me. It managed to squeeze every bit of beauty out of its papercraft design. One late-game level even managed to make me see just how much it was taking advantage of the PS4’s beefy hardware as it used rain and washed-out colors to offer an almost tilt-shifted view. The Last Tinker’s visuals were never what I’d call impressive, but they were often very pretty and visually interesting.

Still, when I look back on The Last Tinker, all I’m going to think about is how confused the game’s design was from an audience’s standpoint. You had childish character designs, babyish sound effects, lots of reading, a story that is subtly heavy with possible biblical overtones, and gameplay perfected several console generations ago replete with fast-twitch platforming sections and moderately complex puzzles that will turn off gamers young enough to appreciate some of the other parts of the game. It’s a conundrum, and something I’ll be thinking about long after I’ve stopped thinking about Koru and Tap and their adventures in Colorland.

The Last Tinker: City of Colors is a fun and insignificant way to spend seven to 10 hours with your PS4. The game will remain most memorable for me because of the way it never could decide who it was meant for—Kids? Adults? Teens? Super-coordinated babies?—rather than for graphical or gameplay reasons.