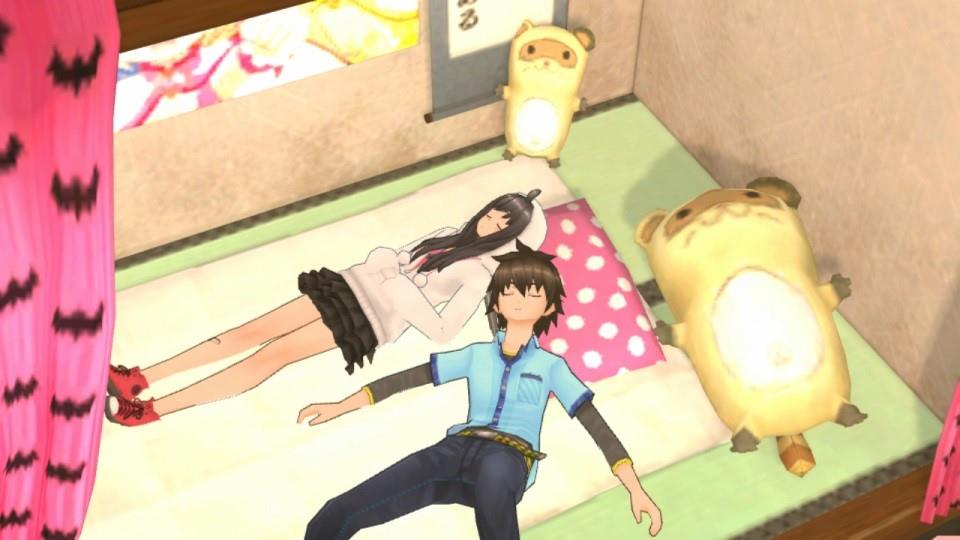 Written by Matt Mirkovich on 9/2/2014 for Vita
More On: Akiba's Trip: Undead & Undressed

Playing Akiba's Trip: Undead & Undressed, I was reminded of an actual commercial I saw during my last trip to Japan. It was a commercial for some instant ramen, and it talked about how the samurai haven't died out, they've just evolved into the otaku of today, with their fanatical devotion to the idols that Akihabara spawns. Acquire Corp. has a bit of experience in representing samurai in their games, being known for the Tenchu and Way of the Samurai franchises. Akiba's Trip also retains that sense of humor and brevity that makes those titles enjoyable, and while it's very much a work of passion, Akiba's Trip also suffers from some of the same problems as Tenchu and Way of the Samurai.

Akiba's Trip stars you, an atypical otaku who's fighting for the very soul of Akihabara after running afoul of the Synthisters, vampires that feed on the life energy of those around them. After unwittingly joining them under the guise of a job for some rare anime swag, you're rescued by the mysterious Shizuku, who knows a lot more about the Synthisters than she lets on, along with details on how to defeat them. How do you stop these vampires? Expose their (near) naked flesh to sunlight by stripping them of their clothes. But being a Synthister yourself, you're also weak to sunlight, which means you'll have to keep your clothes in check, or it's a hot and embarrassing death for you. Thankfully there's plenty to wear in Akihabara, whether they're clothes from a local anime goods store, something from one of the many maid cafes, or even the clothes straight off your enemy's backs; if you can strip it, you can cop it.

Wandering Akihabara in Akiba's Trip is a surprisingly nostalgic experience. Acquire Corp. got this haven of otaku fantasy down to some pretty specific details, which I guess could be expected since this is practically in their backyard. But wandering the side streets, or the Electric Town Exit plaza, this game has some stuff in it I would expect to be a licensing nightmare, with properties from Sega, Square Enix, NIS, and Bandai Namco on display. While this game is no slouch in presenting these visuals either, Akiba's Trip is prone to some really long load times, and they are very frequent since each of the areas you can explore are rather small. Thankfully you have the ability to warp between the areas you've previously been to, which cuts down on some of the travel time, but considering how much you have to backtrack, it gets to be quite annoying to see that almost-ever-present loading screen. There's also the issue of populating the world. Once you reach an area, non-player characters won't immediately be present and you'll need to wait for them to load in before you can interact with them, and the limited draw distance means you'll have to be pretty close before you see them revert into a simplistic 2D representation of a person.

The story is pretty straightforward: Find the cause of these Synthisters and put a stop to their evil machinations. Along the way you'll be recruiting other people to join the Akiba Freedom Fighters, who lay claim to the famous club MOGRA, as their base of operations. Curiously all of these new members are female, and you never get to roll out and fight with one of your bros. But it's not all bad. These women can hold their own pretty well and can team up with you to perform some powerful clothes-stripping techniques. Although combat is another area where this game tends to struggle. There are plenty of weapons out there, and while there is a wide variety, they boil down to only four different disciplines. You've got your standard short range sword-like objects: umbrellas, bats, wooden swords, and the like. Then there are the heavy weapons: large swords, giant leeks, Tokyo Tower replicas. And silly stuff like glowsticks, water pistols, and cat paws, just to name a few, as well as super-short-range weapons like laptops, arcade game boards, and briefcases. You'll be combining a lot of these items to power up your weapon of choice, which will increase the amount of damage you can do to your opponent's clothing.

Clothing comes in three different categories: hats, shirts, and pants. Everything else is just window dressing. But you'd do well to protect your clothes in combat. Thankfully it's possible to restore clothing mid-battle, but if you happen to get stripped, you'll have to wait until after combat, provided the piece of clothing you lost wasn't completely trashed. You'll be taking swipes at your opponent's clothes with whatever weapon you have handy, and as your strike their lower body, torso, or head, the clothing will grow weaker until it can eventually be stripped. Attempt to remove the clothing too early and you might be rebuffed, or you can get caught in a game of tug-of-war which can potentially accelerate the removal of clothing. If you're the patient type, you can actually counter your enemies with well-timed strip of your own. The biggest flaw in combat though is that at higher difficulty levels the enemies get to be obnoxiously good at dodging attacks, which just makes fights into a slog of waiting for counter attack opportunities. On the standard difficulty this isn't that big of a problem, but if you want to step up the difficulty, don't expect the game to be any more fun, or for your weapons to be any more effective. The combat itself feels like a pretty watered down version of the Way of the Samurai combat, minus the ability to switch stances. Instead combos are only determined by the weapon you carry, and they never grow beyond what you start with.

When you're not participating in story missions with one of the many girls you're painfully trying to land some quality time with (seriously this game gets to be pretty heavy on the harem tropes of anime), you'll have a ton of side quests that you can complete for cash and goods to improve your abilities of clothing removal. There's a battle arena where you can put your combat skills to the test, or missions from your "adorable" little sister, or you can just explore some of the famous shops like Super Potato or Sof-Map. Your first runthrough will take roughly eight to 10 hours, after that it's on to the new-game-plus scenario where a bunch of stuff carries over and you can try to get through the story with a different companion. 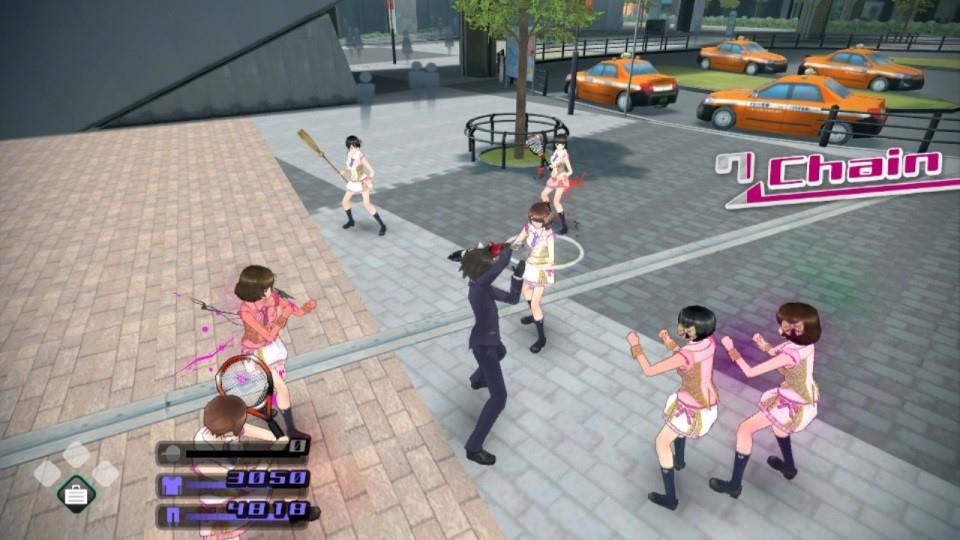 Akiba's Trip is a pretty good-looking game for the Vita, but the limited draw distance and long load times also make it feel like a very empty Akihabara. I can personally attest, however, having been there on weekends, Akihabara is anything but empty. I'm not saying it needs to be teeming with NPCs, but having a few more people around would have at least helped the world feel a little livelier. The audio is a surprising stand-out, with commercial cuts playing over booming speaker systems, sidewalk solicitors, and plenty of anime-inspired tunes will accompany you on your journey. The bummer though is that a lot of the NPCs have the same voice actors, so you'll be hearing a lot of the same person.

I'm torn on this game. It's very much a love letter to the otaku lifestyle, but it's not a very good game after the first playthrough. It's worth checking out at least once, but it's pretty tough to try and stick it out to see the multiple character endings. It's kind of a waste of the excellent localization work that XSeed put into this game, because if you dig at this game a little bit you'll find a ton of stuff in the game's encyclopedia, Pitter (the game's Twitter clone), and even in the character dialog. The little-sister character is full of hilarious charm, but you won't see a whole lot of it if you completely ignore the little shut in.

If you've enjoyed Way of the Samurai games, or just have an itch for something unique, Akiba's Trip is a game that's worth checking out. And while the game touts a lot of post-game content, it means putting up with a weak combat system, excessive load times, and some boring missions. While I personally enjoyed the game, I think this is one of those very niche games that you're either going to love or hate.

Akiba's Trip is like a summer blockbuster at the movies, it looks like it'll be a ton of fun, and it has its heart in the right place, but it's just missing a little bit of soul. Thanks to a sub-par battle system, and some technical flaws, it winds up wasting a lot of potential.