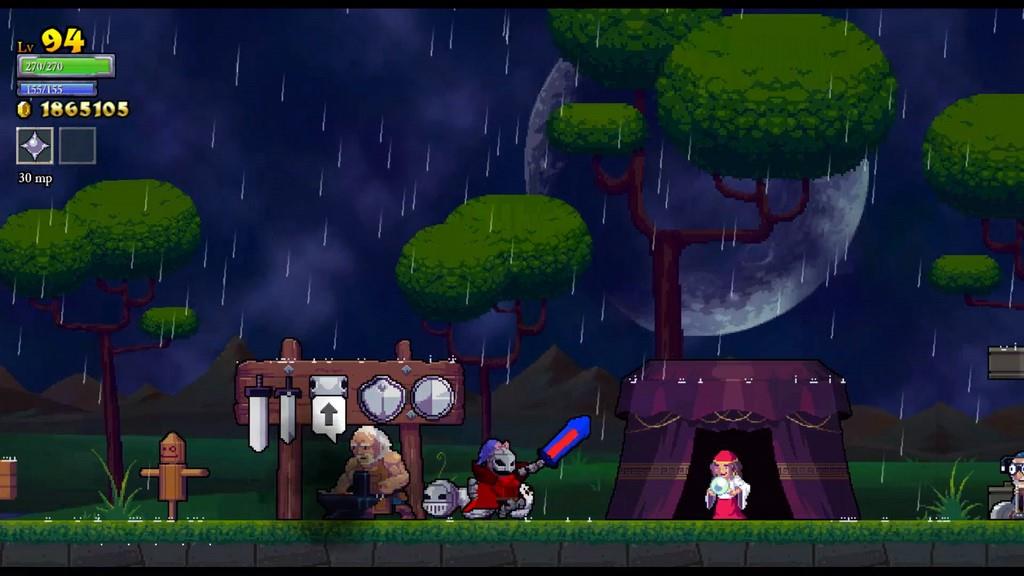 Conventional wisdom used to say that puzzle games are a perfect fit on handheld systems. Of course, they mostly said this because of the popularity of Tetris, but there's certainly truth to that train of thinking.  After two decades and countless portable systems, I think it's time to update that old adage. With procedurally-generated levels, simple mechanics and an emphasis on replay, the roguelike truly is a handheld game system's best friend.

Don't worry if you've never heard of a roguelike before, because Rogue Legacy is an incredibly accessible introduction to this trendy genre. You play a brave fighter who embarks on a grand adventure to collect four special items, open the sealed door and defeat a traitorous knight. Unfortunately, the castle proves too powerful for our inexperienced hero. He dies in battle, leaving behind three heirs looking for revenge.

This is the conceit of Rogue Legacy, the brand new retro-inspired action game for the PlayStation 4, PS Vita and PS3 (cross-buy across all three platforms). Much like Spelunky, Don't Starve, Gunslugs and other traditional roguelikes, death is permanent. You don't simply lose a life or respawn at a checkpoint, but rather start the game over from scratch with a brand new character. This means you'll need to choose amongst the fallen hero's sons and daughters, creating a family tree dead set on exacting revenge. And so the cycle begins.

As each round starts, the player will choose between three unique heirs. Male, female, young, old, gay or straight, there's a fun mix of characters to choose from. Some are big and strong, while others are small and fast. But it goes beyond the obvious differences and veers into the absurd when we learn that some warriors have ADHD, color blindness and a bad case of nostalgia. 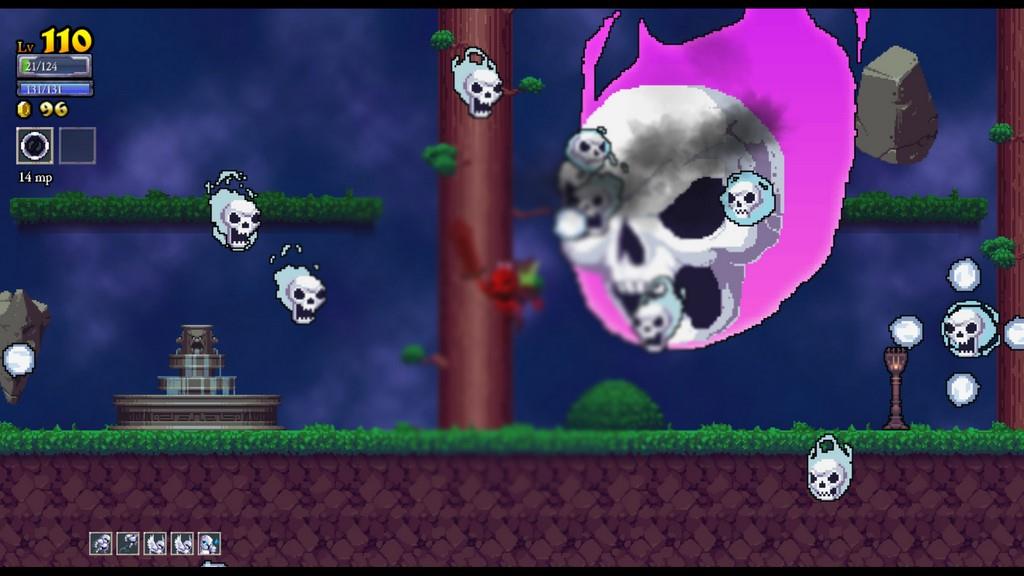 These character traits impact the gameplay in ways you might not expect. For example, a character suffering from vertigo will see the screen upside down and have the controls reversed. Some characters are near-sighted, which means that much of the screen is blurred. And then there is the occasional heir that feels like they are The One, seeing the castle has a futuristic neon design. You'll also run into characters with Tourette Syndrome, tunnel vision, stereo blindness and O.C.D., each of which alters the gameplay in unpredictable ways.

Beyond the character traits, players will need to weigh a number of other factors in choosing a character. Each heir will start with a different kind of special ability and item. You'll wield fast moving daggers, powerful fire, a throwing ax and several other items that feel like they were pulled directly from Castlevania. Some characters will also have the ability to use magic, which includes leaving a doppelganger and turning into a mist.

The idea is to take your hero into the procedurally-generated castle and search for money, treasure and those four missing items. When you die, your offspring not only carries on the name, but also keeps your money and equipment. Collecting money is vitally important, as it's the only way to upgrade the lineage between rounds. You can use it to buy new types of character classes, such as the assassin, miner, spelunker and Shinobi.

On top of the different classes and upgrades, there are perks that can be equipped to the player. Placed on the different parts of the armor, these perks allow your fighter to double jump, float in the air, heal after every kill and quickly dash forwards and backwards. These perks can change the gameplay in dramatic ways, but you'll quickly discover that some only have a few very specific uses.

It's this progression that sets this game apart from many traditional roguelikes, and it's also the reason why it's the most accessible. Yes, it still sucks when you die, but there's always the feeling that you're making real progress. That's something missing from a lot of games in this genre, and perhaps that's why I found myself enjoying it more than the similarly-themed Spelunky. No matter how many times I died, I wanted to jump back in and try my luck again. It's easy to lose a lot of time battling the evil forces inside (and surrounding) that castle. 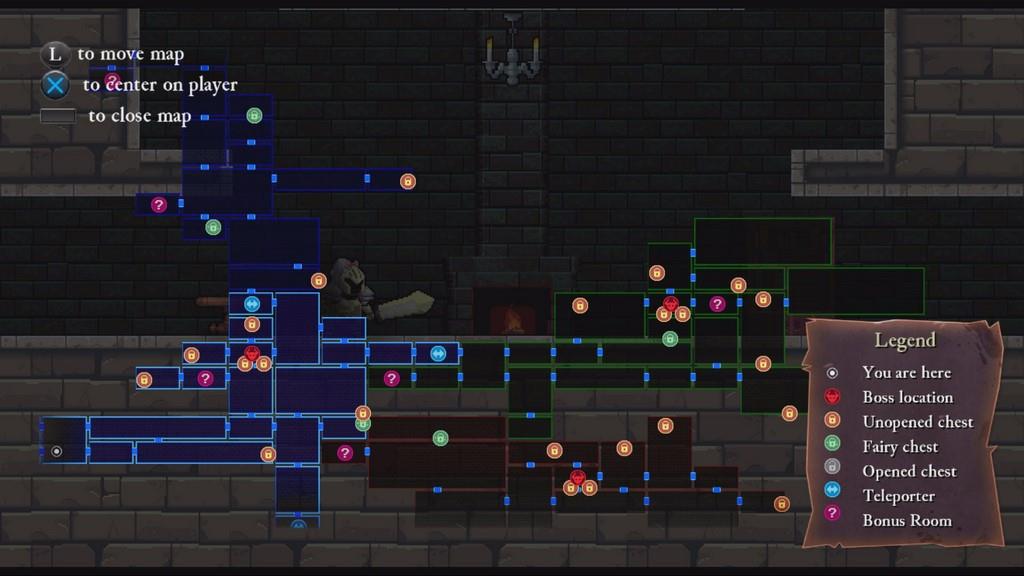 It doesn't hurt that the game plays out like a giant homage to Castlevania. Everything from the monsters to the locations feel like they were ripped out of Konami's classic series. But despite the obvious similarities, Rogue Legacy manages to stand out by introducing a few new ideas to the mix. In one example, players will run into special treasure chests that can only be opened by completing a skill challenge. This might include killing all the enemies in the room or passing through a tough section without being injured. If you fail them, they are gone for good.

For what is an incredibly simple concept, Rogue Legacy has a lot going on. We haven't even talked about locking down the castle, allowing players to reenter the same map multiple times. There are also several large bosses, all of which will test your dodging skills. And it's easily the funniest roguelike I've ever played; full of clever moments I won't spoil here. It's surprisingly easy to get wrapped up into the simple story of a family seeking revenge. 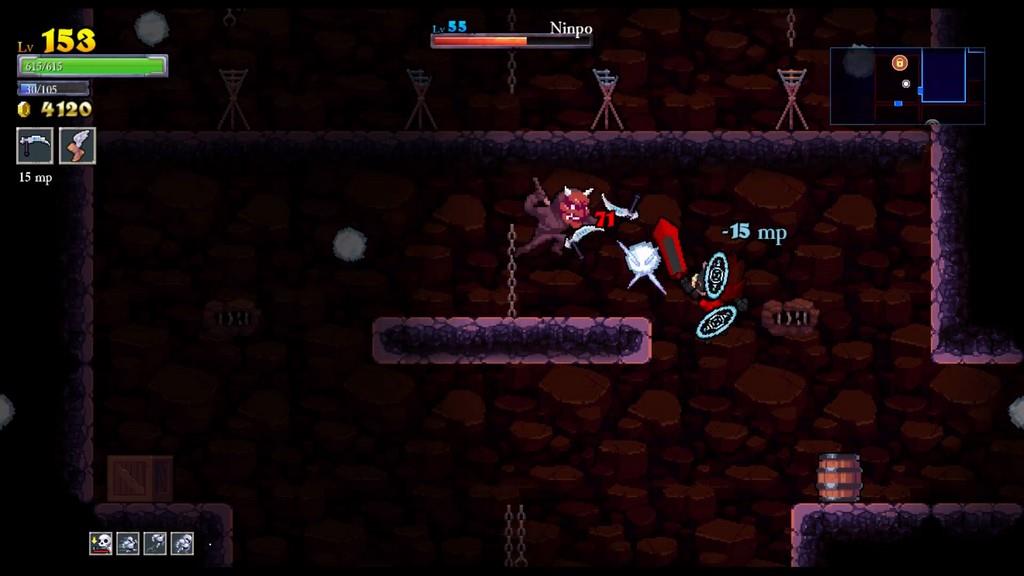 For as much variety as we see in the characters, it's a shame the same cannot be said about the combat mechanics. With characters as diverse as a miner and Shinobi, it's a shame every class resorts to the same basic hacking and slashing. Every character rushes into battle with their giant sword held high, regardless of much it conflicts with the individual classes. This is a minor gripe, but something I started to question the longer I spent exploring the world of Rogue Legacy.

Although good on the PlayStation 4, this is a game that really shines on the PS Vita. The rounds are generally quick and the sense of progression makes it the perfect portable game. But no matter what system you play it on, Rogue Legacy is a charming little action game with light roguelike mechanics and a great sense of humor. Don't be fooled by the unassuming graphics, this is a game that will have you glued to the screen for dozens of hours.

Rogue Legacy is a devilishly clever mix of Castlevania and Spelunky. No matter how many times they die, players will never grow tired of the large variety of characters and classes, as well as a world that changes with every play. While great on all systems, it really shines as a portable action game. This is one roguelike that is hard to put down.

I couldn’t agree more with Cyril. Rogue Legacy was an absolute gem on the PC and it has gotten even better with its transition to Sony’s consoles. You won’t go wrong with it on either the PS3 or PS4, but the truly shines when you pick up the Vita. It is an amazingly simple concept that is so well executed that it feels as if it was built specifically for Sony’s little handheld.

In addition to addictive and simple gameplay, the game ( and its developers) have a great sense of humor, which is incredibly refreshing. I am still catching little things, even after pouring hours upon hours into the game. The variety of traits are hilarious and while they don’t all directly affect the gameplay, they will all do something that will put a smile on your face too. Some are subtle, others are blunt and in your face, but they are all done with such a lighthearted approach that you can’t help but laugh, even at the more offensive ones.

Even when the humor aspect begins to wear off, after you have seen all of the traits that there are to see, the game still shines on its technical roots and execution. This game could survive just as well without the hereditary-aspect if need be because it is setup and plays so well. Cellar Door has crafted what I would consider to be the best rogue-like game there is, and that is a title that I don’t see them giving up any time soon.