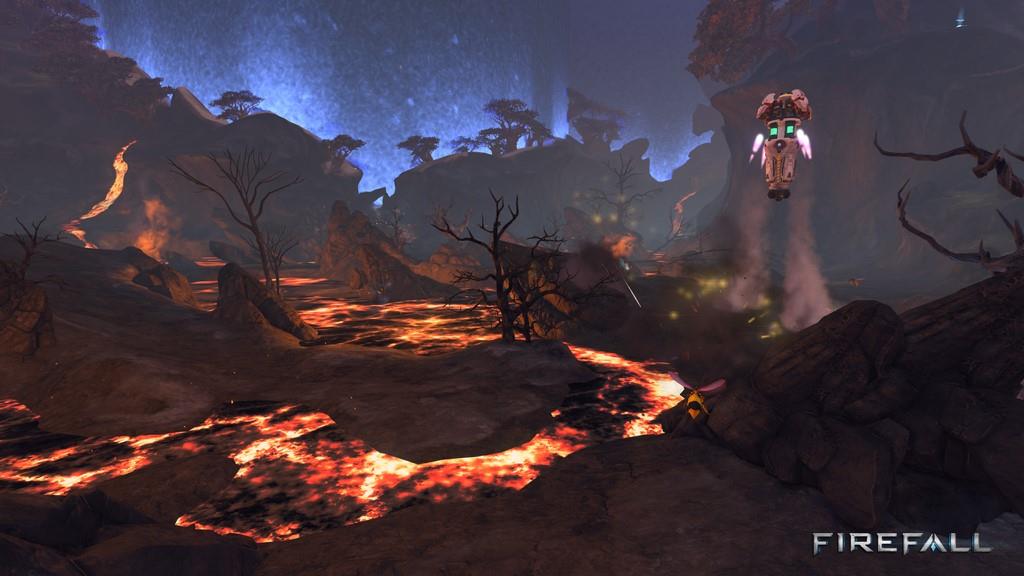 I am very picky when it comes to MMO's. I really enjoy them, but for most I play for a few months and cancel my subscription because they usually get to a point where I have to grind to get to a decent level to be able to complete any missions. Then I just stop playing all together, so I really enjoy the concept of free to play MMO's. I can play as much as I want without having to worry about whether I'm wasting my monthly subscription money, so of course I jumped on the opportunity to check out Firefall, the free to play MMO Shooter. I really with I hadn't.

Right from the opening cinematic, I felt my excitement start to dwindle. I honestly had a hard time paying attention to whatever the story is for this game because it just drags on and on and on to the point where I just wanting to skip it all together. So, okay, the story didn't really get me interested but hey, that's just me. So, I got excited because I wanted to check out the character creation system, which is usually the first thing you do in an MMO right? Well, before I know it, I select a class and I am already on the first mission. At first I was a little confused because I was sure I had missed something. Usually MMO's have some kind of character creation system in the beginning, but I was thrown right into the game as a randomly created character. Again, I hope that I missed something because at this point I was already annoyed. You get a standard set of classes to choose from. Assault, Biotech, Engineer, Dreadnaught, and Recon. The good thing though is that as I started to play the game, I was having some fun. The guns were great and the shooting was fun as well. Thankfully, if you aren't feeling the class that you chose, you can always change that as well without having to start a new character. Eventually I was introduced with the Battleframe station which does let you create the character that you want to play. This is a free-to-play game so most of the clothing options are locked out in favor of currency, which I have absolutely no problem with. After a few missions however, the fun went right out the window.

The problem with Firefall is that every mission almost feels the same. At the beginning of the game I got a mission to look for someones missing daughter. So I set out into the wild to look for her. I followed the mission marker and found the daughter. Nothing happened. I went exactly where I was told to and couldn't interact with her at all. I was wondering what the hell was going on. I thought the game might have bugged out. It's an MMO after all and this kind of stuff happens. So I logged out and then back into the game. The same thing happened. At this point, I became extremely frustrated. It was at this point where I saw an identical copy of the girl I was looking for out in the distance and then another, and another. This planet sure does have a lot of missing daughters. After finding the right one, the one that was specifically assigned to me, I had to defend her from arachnids as she mindlessly walked around like an idiot. So one mission complete and I go back to the mission board for another. This time I had to find someones missing son. I had a feeling I was sensing a trend here. After endless trips to the mission board, and then flying and completing generic fetch quests, defense quests or horrific escort quests, I got extremely bored.

It's so incredibly tedious to have to go to the job board, and then have to travel, sometimes a ways away to complete and easy mission that lasts about 2 minutes if that. There are launching pads that send you in the air and allow you to hang glide through the map, which does speed up travel time a bit but you will still have to mindlessly travel throughout the boring game world that is completely void of anything interesting. Sure at later levels you can unlock a vehicle to help you get around faster but there I no way I can see myself putting in enough time in this game to get that high of a level. Maybe if the game wasn't filled with so many bugs and issues I would have cared more.

I have a good videocard and a good PC. I can play Skyrim at ultra, super duper, max settings with a silky smooth frame rate along with tons of other games. Firefall, not so much. At max settings I was getting insane frame rate drops, so much that I had to lower the settings to medium to get a good frame rate, which confuses me because the graphics for this aren't really anything to write home about. So even at low settings I was having problems. Three times the game crashed back to the desktop and this was in the middle of missions as well. My frustration slowly started to turn to anger, but I tried to brush it off.

Its a new MMO afterall, there are bound to be some hiccups but as I walked around the Cabana and met the various NPC's of the game, my will to continue on continued to drop. I believe that games like this require interesting NPC to keep you, well, interested. Look at a game like Borderlands or Mass Effect. I know those aren't MMO's but still, those games have very memorable NPC's, ones you want to keep coming back to because you want to see them. They make you laugh and you want to hear them talk. The NPS's in Firefall however I wanted to never talk to again. The voice acting is so dull and almost non of the characters even sound like they aren't even trying to be interesting.  Even though there were tons of other players around me on their own missions, the whole world just feels empty and I feel like even though I'm completing these missions, I am not really having an impact on anything. One thing that I found especially annoying is how other players can kill enemies that you need to kill on missions. I know this is an MMO where you are supposed to play with others but I felt like I was being robbed of what was supposed to be fun on a mission. I got to a boss fight and another player that was levels above me came in and took out the boss in a few shots, while I just stood there and watched before I even got to attack him. Of course with MMO's there are scripted events that play out to advance the story as you gain levels, but at this point I just didn't care about anything anymore.

I'm sure that overtime, Firefall will include tons of new content to keep players interested but as it stands right now, I have absolutely zero interest in playing this game any farther. Now, to be fair, the game is free to play and there is always room for the game to improve over time. I am interested in trying the game again months from now to see if anything has changed, and if it has, I am willing to do a revised review, but for now, I think my time with Firefall has come to an end.

Firefall showed some real promise as I started on my epic journey. The shooting was fine, and the missions were fun at first, but then after doing almost the same thing over and over again, I just couldn't find any reason to continue. Like I said, I am willing to go back and see if the game improves in the future but I wont be returning to Firefall anytime soon.