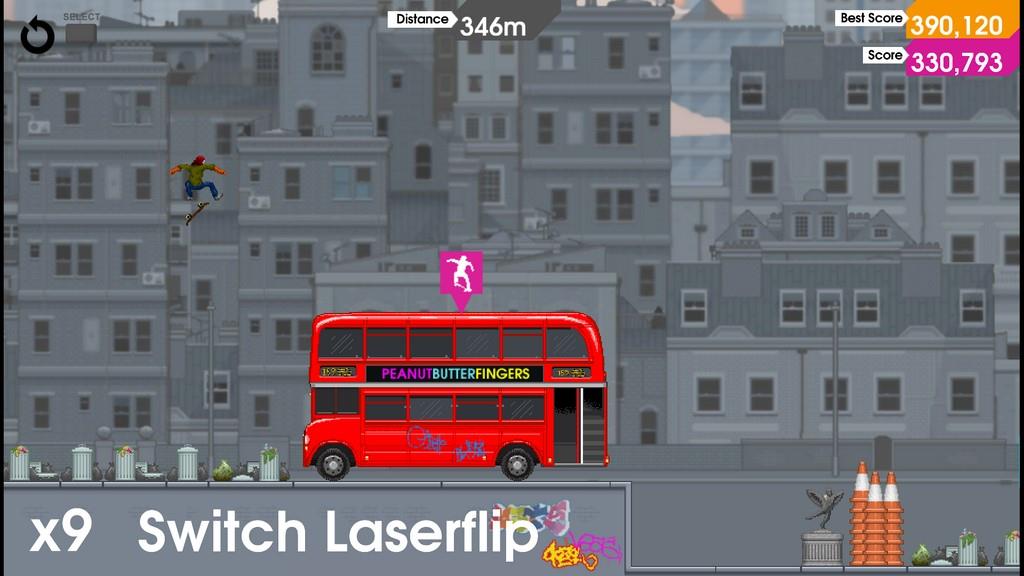 There was a time when Tony Hawk's Pro Skater reigned supreme. We would all huddle around our couches trying to get the highest score possible all while pulling off ridiculous tricks in the process. For me, what made the Tony Hawk games so fun was the career mode and all the various tasks that needed to be completed in order to unlock new stages. Afterwards, the Tony Hawk games and EA's Skate series were putting out more skateboarding games but they seemed to go for a more realistic approach rather than over the top arcade action. That was years ago. It's been a long time since there was a good arcade style skateboaring game around but OlliOlli is here to fill the void, and it's fantastic.

The first thing I will mention is the amazing urban, instrumental soundtrack that perfectly fits with the feeling of the game and perfectly sets the tone for the game as well. Music is on of the most important things in videogames to me and I instantly fell in love with the soundtrack as soon as I began playing.The game also features nice 2D, Pixilated graphics as well which again, I think fit well for the game seeing as this is a 2D platformer of sorts. If Tony Hawk Pro Skater were available on the NES, I think it may have looked something like this.

OlliOlli has a simple premise. Make it from the top of the hill to the bottom while racking up the highest score possible. Oh yeah and don't die. Of course this doesn't come without a challenge. On your way down you'll have to pull off crazy tricks and combo them together if you want a good score. The controls for the game are a bit confusing at first but after a while you'll get the hang of it. A thing of note is that I played this game on PC using an Xbox One controller. The game does support keyboard but it was really designed to be played with the controller. Keep that in mind if you want to get the PC version.

To pick up speed, you simply tap the A button. If you hold the thumbstick down in a direction, you'll ready yourself to launch in the air. When you see a ledge or something you can grind on, you just let go of the thumbstick to jump. When you are in the air you can move the thumbstick again in specific directions to pull off tricks. If you can combo your tricks and grinds together, you can pull of a big score when you hit the ground. That is, if you don't sloppily land. Right before you hit the ground, you need to press the A button to land perfectly. If your timing is off, or if you don't hit the button at all you will land sloppy and lose a ton of your points. That huge 10,000 point combo you just did? You can expect to see that score drop to only around 100 points or so if you don't land well, so it's very important to make sure you time to landings well. On your way down each level there will be tons of obstacles in your way as well, and the obstacles pile up as you advance through the game. The thing with OlliOlli is that if you crash, even once, you fail the level and have to do it all over again. Imagine if when playing Tony Hawk's Pro Skater you crash and have to start at the beginning of the level again. While this may seem frustrating for some, each level is the right length to where this doesn't become annoying.

Of course, as with most skateboarding games, you have plenty of tricks at your disposal and pulling them off will feel very familiar with those who played EA's Skate games. Various maneuvers with the thumbsticks will allow you to pull off various tricks and you will need to keep switching them up if you want a huge score. Of course you can also use the bumpers to add spin to your moves for more points but usually when I do this, I find myself crashing constantly. Of course that doesn't mean that the mechanic is bad, it just means that with when adding more variety to your tricks, there is also a higher risk of crashing. This is great though as it also offers a great risk and reward system to keep the game interesting. You can also check out a handy list of tricks available to you from the main menu. You will need to pull off those high risk tricks if you want to advance through the career mode. The game uses a stars and unlocks system where you need to complete various tasks in order to open new levels. These tasks usually involve things like scoring a certain number of points, picking up all of the grind icons, and finishing the level without any sloppy landings. A bit of warning for those who are frustrated easily. This game will involve some serious trial and error. You often fly down the course at such a high speed that you will have no idea what kind of obstacle is coming up next, which causes you to crash. For me, I found that the more I failed, the more I was able to learn the course and prepare accordingly. 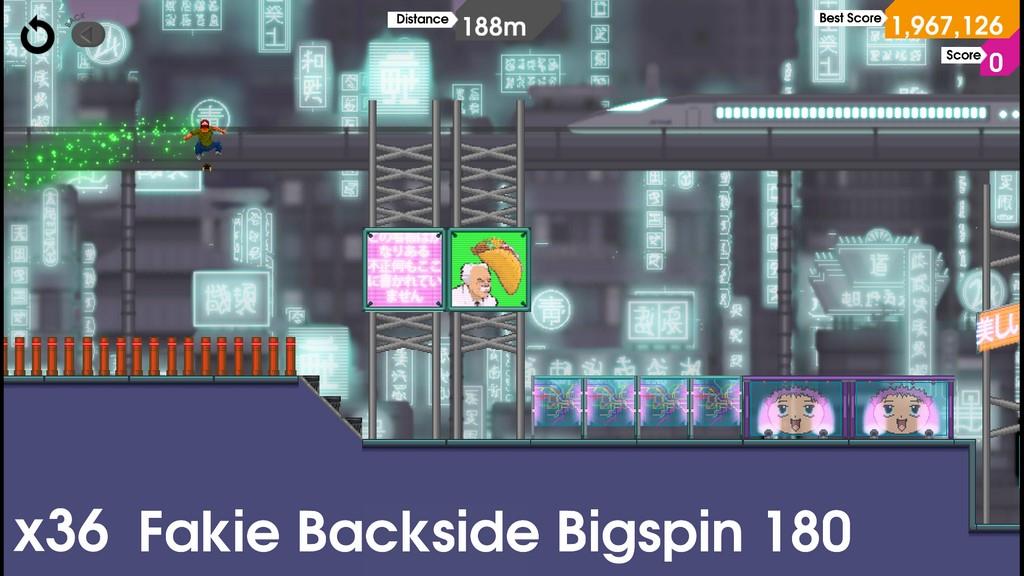 For those who love games with bragging rights, OlliOlli provides that as well as you can play each of the courses in the game simply to try and achieve the highest score possible and of course, your high scores can be shared online via leaderboards. Usually with games like this I think I have pulled off a great score, then see myself in a horrible position on the leaderboards and when I check the top score, I often wonder how such a thing is possible. Oh well, it just keep me thriving to boost up that score.

All in all, OlliOlli is an incredibly fun and addicting game. It really brought me back to my childhood as I sat on my couch with Tony Hawks Pro Skater pulling of crazy tricks, trying to boost my score as high as I could. Some players might find that constant crashing and having to restart levels frustrating, but the levels themselves are short enough that I found myself constantly coming back for more. I highly recommend this game for anyone that is looking for an extreme sports fix. These days, when everything is taking the realism route, I really appreciate that we still have games like OlliOlli around to remind us of how simple and fun games can be.

It may not be a full 3D Skateboarding game like we used to have, but for those who want their extreme skateboarding fix should look no further than OlliOlli. Its fast, fun and incredibly addicting and I think I will be returning to this game many more times in the future.