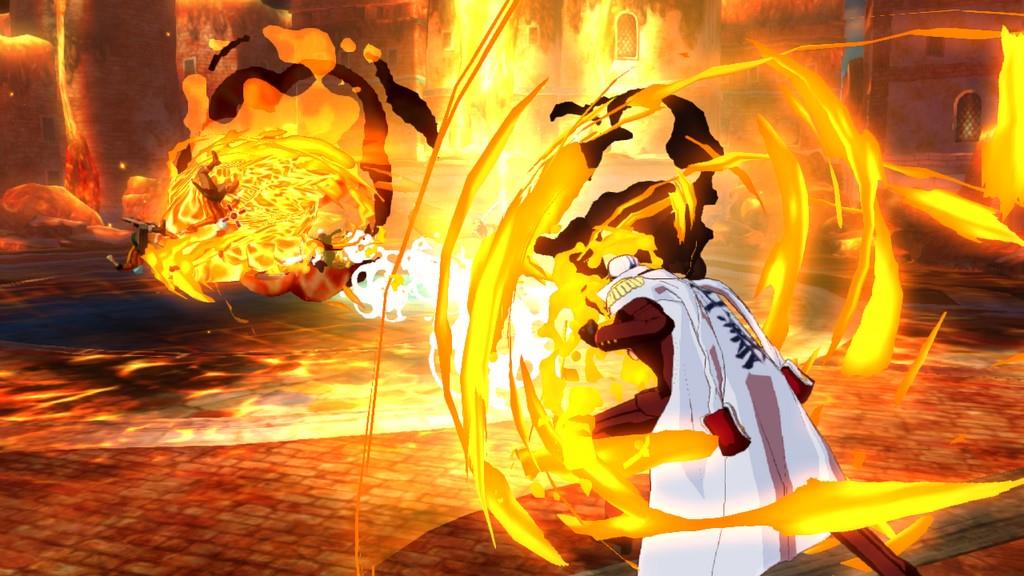 It's no secret that most games based on popular anime don't live up to the expectations of the fan base. They're often too simple or fail to capture the charm and magic that made the property so much fun in the first place, not unlike the sad fate of games based on movies and TV shows. But One Piece: Ultimate World Red bucks the trend and delivers a surprisingly engaging 3D brawler with a strong cast of characters, a good sense of humor and a nice variety of stages. And best of all, it's the kind of game that can be enjoyed by fans and newcomers alike.

I say that because I've never seen a single episode of One Piece. I've seen pictures of the main hero, Monkey D. Luffy, and caught the infectious theme song on YouTube, but this PlayStation 3 game was my first real exposure to the story telling. It's the kind of game where anything and everything can happen next, so I couldn't wait to see what each new stage delivered. Best of all, the story is self-contained and doesn't require an encyclopedic knowledge of the show.

I knew I was in for something special right from the get-go. Instead of starting off slow, One Piece immediately tossed me into a battle against a humongous fire-breathing dragon. I was delighted by how easy it was to take on such a massive creature, and the impressive visuals really grabbed by attention. Little did I know that the best was yet to come.

Instead of being yet another shallow fighting game, Namco Bandai wisely opts for a slightly different genre -- beat-em-ups. Inspired by the likes of Final Fight, Streets of Rage and Double Dragon, Ultimate World Red is a fast-paced brawler with a wide variety of bad guys and giant bosses. The beat-em-up genre fits this type of game perfectly, as it allows us to see a lot of different moves inspired by the source material. With so many different attacks and combos, this One Piece adventure is actually deeper than many other games in the genre.

Unfortunately, the story isn't nearly as interesting as the gameplay. Without trying to dismiss the occasionally interesting twists and turns, a lot of this game involves chasing after colorful villains for one reason or another. Early on it's because some of Luffy's crew has been taken hostage, while later it's because they're trying to settle the score. In reality, there's only enough story to get us from one stage to the next, introducing larger-than-life bad guys from the anime. 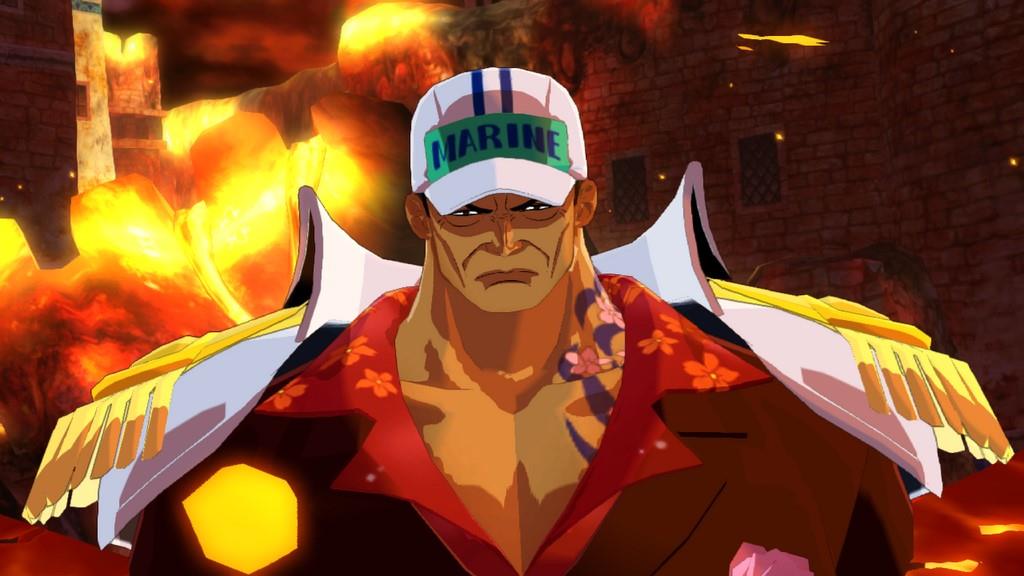 I found much of the game to be absolutely baffling, and yet I couldn't take my eyes off of it. I'm sure fans of the series will get even more out of the different cameos, but I was amused by how different each of these villains was. In one stage you could be fighting a well-dressed man who just happens to turn into a cheetah, while in another stage you're taking down God-like deity. And then there's Kizaru, who looks like he recently finished touring with Tom Jones. From zany to deadly serious, the variety in One Piece is staggering.

As baffled as I was, I couldn't help but love the randomness of this world. There's no consistency in anything, including the art style and references. And in a weird way, all that works in the game's favor. I couldn't wait to see where I would be brawling next. And even though each level plays out exactly the same (find a locked door, kill bad guys until the password appears, open the door and do it all over again), there's enough variety to keep things fresh from start to finish. 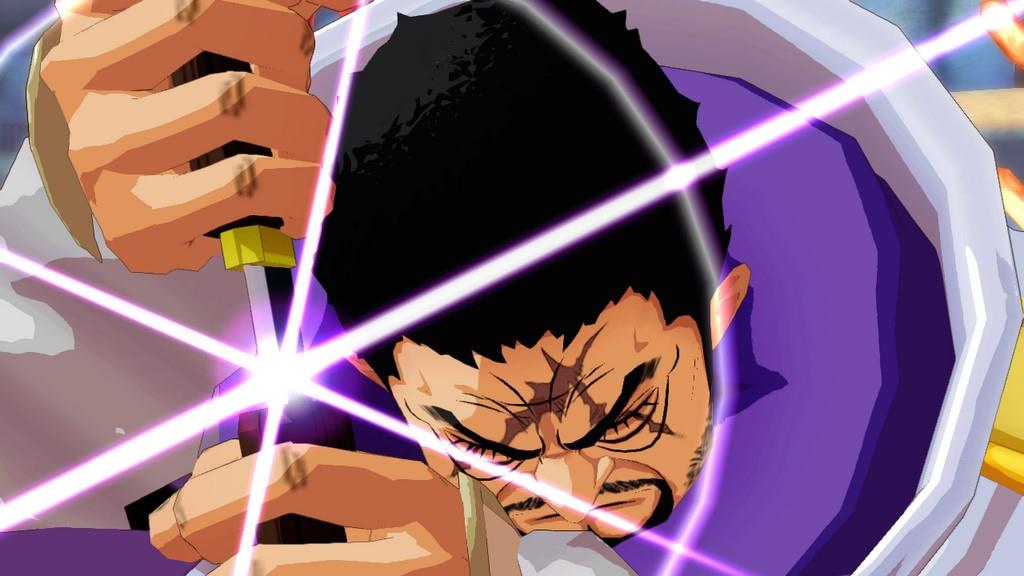 Players will be able to assemble a three-person team to tackle each stage. Here you'll be able to choose from a number of unique fighters, including Brook (the stylish skeleton), Nami (the bikini-clad babe), Zoro (the sword-wielding action hero) and, of course, Monkey D. Luffy, who seems to be cursed with the same sickness as Dhalsim from Street Fighter II. These different characters have unique attacks and special moves, and players can switch between them by simply pushing the "Select" button. This helps to break up the monotony that is so common in brawlers.

Like most anime games, Ultimate World Red uses a number of cinemas to keep the action going. Unlike other similar games, these cinemas are actually worth watching. While the game does occasionally get bogged down into two rambling talking heads, most of the cinemas are full of action and excitement. They look like proper animated sequences, which is more than I can say about Saint Seiya: Brave Soldiers. Finally, an anime that is more than just people talking.

When not fighting through levels set in the desert, underwater, in the sky and through a volcano, Luffy and his team are kicking back at Transtown. This port allows our heroes to interact with the townspeople, take extra missions and help improve the local inn. What's more, Luffy is able to use his stretchy limbs to climb out-of-reach locations, not unlike Bionic Commando. It's a shame this mechanic is completely ditched in the action stages, I would have enjoyed swinging around the level like a weird pirate Spider-Man. 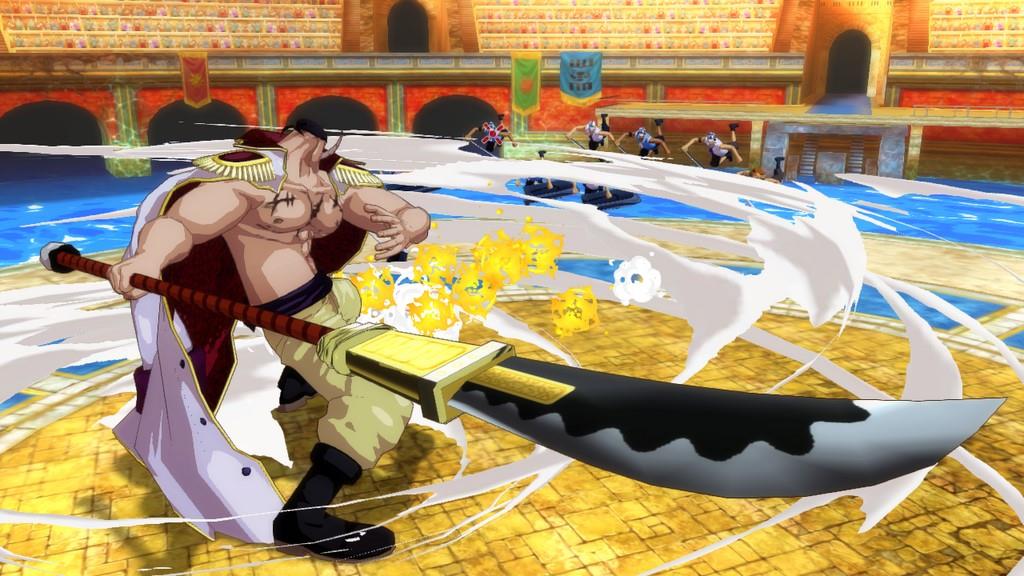 Although the visuals are deceptively simple, they go a long way to help sell the game's zany world. The game employs bright cel-shaded graphics that look like they were ripped right out of the anime. The backgrounds are also impressive, especially as the action escalates towards the end of your quest. Every level finds a way to introduce a unique visual that sets it apart, which is just one of the reasons to see Monkey D. Luffy's journey through to the end.

One Piece: Ultimate World Red wisely dodges many of the problems that plague anime-based video games. It never feels like it's retelling the same story, it's constantly changing and the cinemas are actually interesting to watch. Best of all, this is the type of game anybody can enjoy, even those of us who have never seen a single episode of the TV series. It may not be the most revolutionary game of the year, but Ultimate World Red is a giant step in the right direction for anime games.

With a memorable cast and a great sense of style, One Piece: Ultimate World Red manages to defy the odds and show us that anime games can be a lot of fun. This action-packed brawler rewards fans with a brand new story, exciting gameplay and all kinds of over-the-top moments. Best of all, this is the type of game anybody can enjoy, even those of us who have never seen a single episode of the anime.