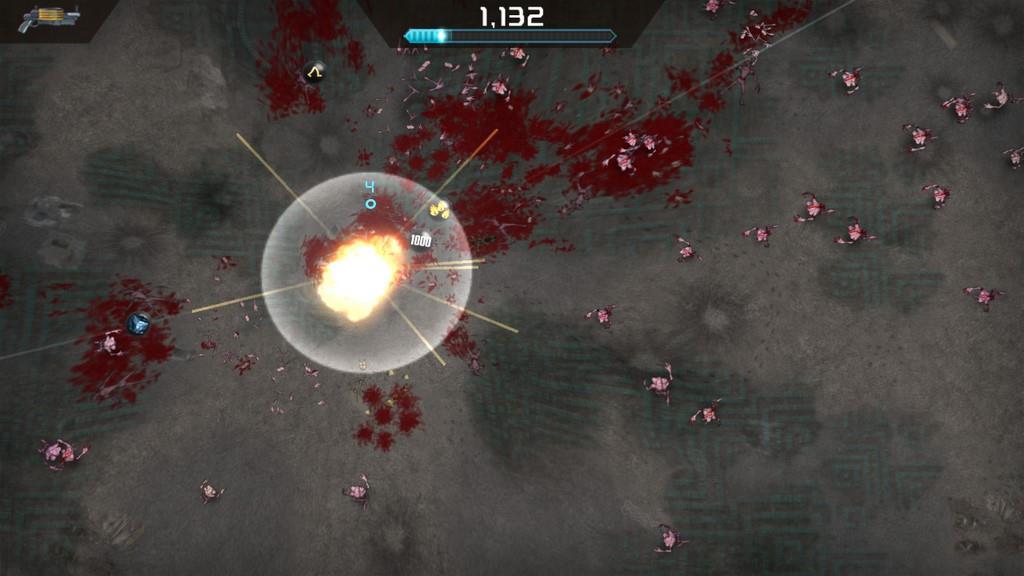 Sometimes I really hate Geometry Wars. Don't get me wrong, I think Bizarre Creation's shooter is a masterpiece and one of the best action games of the last decade. But as great as it was, Geometry Wars set a terrible precedent. Because of this 2005 release, everybody expects there will be a high-quality dual-stick shooter ready to go whenever a new console launches. Sadly, that is not the case. This is a genre that is incredibly hard to get right, as demonstrated by Crimsonland on the PlayStation 4.

If the name sounds familiar, it's probably because you played the 2003 original. Released on the PC long before Geometry Wars made dual-stick shooters hip (and long after Robotron 2048 and Smash TV established the sub-genre), Crimsonland had players using the mouse and keyboard to run around a giant screen, killing zombies, spiders and other monsters. And now that this type of game is all the rage, this fast-paced action game finally got the makeover it deserved, along with much-needed dual analog stick support.

For an overhead shoot-em-up, Crimsonland seems to have a thing for Doom. Not only is the title screen a direct homage to the influential first-person shooter, but the menus and level names are intended to evoke a Doom vibe. Unfortunately, the similarities end there. Instead of navigating a series of mazes, every level takes place in a giant, wide-open environment with no cover or objects on the playing field.

In fact, you'll quickly discover that all 60 stages (spread out across six different areas) play out exactly the same. Players are tasked with killing every last monster, mutating spider, zombie and lizardman found in the stage, including the ones that seem to warp in from nowhere. There's a gauge at the top that displays your progress, though the answer to the question is always to kill more bad guys. And it wouldn't be a video game if the stages didn't become increasingly difficult, providing enemies that take more shots, split apart and explode.

The good news is that our player has dozens of weapons to aid them on their journey. From missile launchers to flame throwers to pistols to automatic rifles, Crimsonland has pretty much every type of gun you can imagine. Instead of automatically firing your piece like in Geometry Wars, this PS4 shooter requires players to pull the trigger. You'll also need to play close attention to how many bullets you have. While each weapon can be reloaded an infinite amount of times, the process of refilling the bullets can be time consuming and quickly lead to your death.

Although I normally enjoy this style of action game, I was left cold by many of Crimsonland's rougher edges. It all starts with the boring level designs, which is little more than a wide-open plot of land. The grass color and landscape changes every 10 stages, but don't get too excited, because this doesn't impact gameplay in any way. Because every level is essentially the same, I quickly grew tired fighting off hordes of monsters. Sure, the enemies got harder and it became impossible to outrun the many creatures on screen, but it never felt like there was any forward momentum or a reason to keep going. You've largely seen all Crimsonland has to offer within the first few stages.

The wide variety of weapons is nice, but I hated the random drops and how many of the guns handled. It doesn't help that you start with the slowest handgun I've seen in a dual-stick shooter. Then again, that perfectly matches the lethargic pace of our hero. The combination of slow running and weak weapons leads to a lot of frustrating deaths. And with levels that are indistinguishable from each other, I had a hard time staying interested. 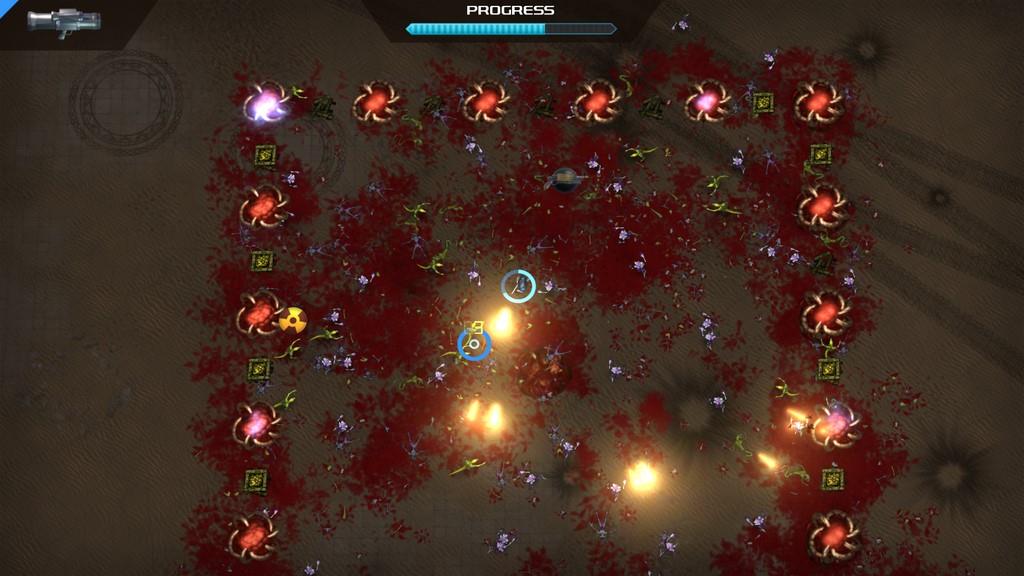 It doesn't seem like it would take much to make these stages unique and interesting. Something as simple as adding a lake would go a long way. Adding buildings and other constructions would also make it easier to tell the difference between stages and add much-needed depth to the firefights. Perhaps trees and rocks could litter certain battlefields. It's these simple touches that are completely missing from Crimsonland, and that's why each area feels so empty.

Beyond the single-player story, Crimsonland also features a number of survival modes. The barebones mode has players using perks to improve their chances against endless waves of baddies. Rush mode wonders if you can survive an alien attack with an assault rifle (the answer is no, you cannot). You can also go to the extremes, with one mode full of nuclear bombs and another with extremely limited ammo. These survival modes are the highlight of the game, and the only thing keeping Crimsonland from a much lower score. 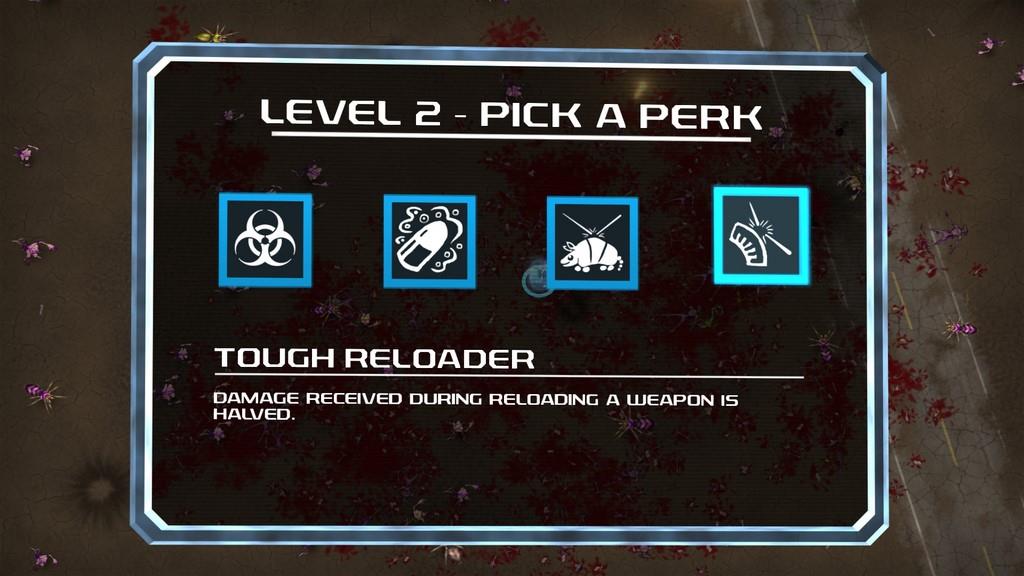 Perhaps it's because of the barren stages, but I found the visuals to be bland and uninteresting. The characters are small and lack detail, and the only defining characteristic of the presentation seems to be the puddles of blood that remain on the battlefield long after the enemy has died. The music is inoffensive and gets the job done, though I wouldn't seek out the official soundtrack.

As a single-player experience, Crimsonland will disappoint. However, there's some fun to be had when you add three other players into the mix. There's a certain level of chaos that works to the game's benefit. It's a shame the developers weren't able to bring that level of unbridled energy to the single-player mode. Even with its mix of enemies and weapons, I still found Crimsonland to be an incredibly boring experience.

Based on the 2003 game of the same name, Crimsonland is a fun four-player dual-stick shooter with 60 levels and a nice variety of baddies. Unfortunately, it's also insanely dull. The levels rarely change and the weapon drops can lead to a lot of frustrating deaths. The few good ideas are overshadowed by too many questionable design decisions to count.