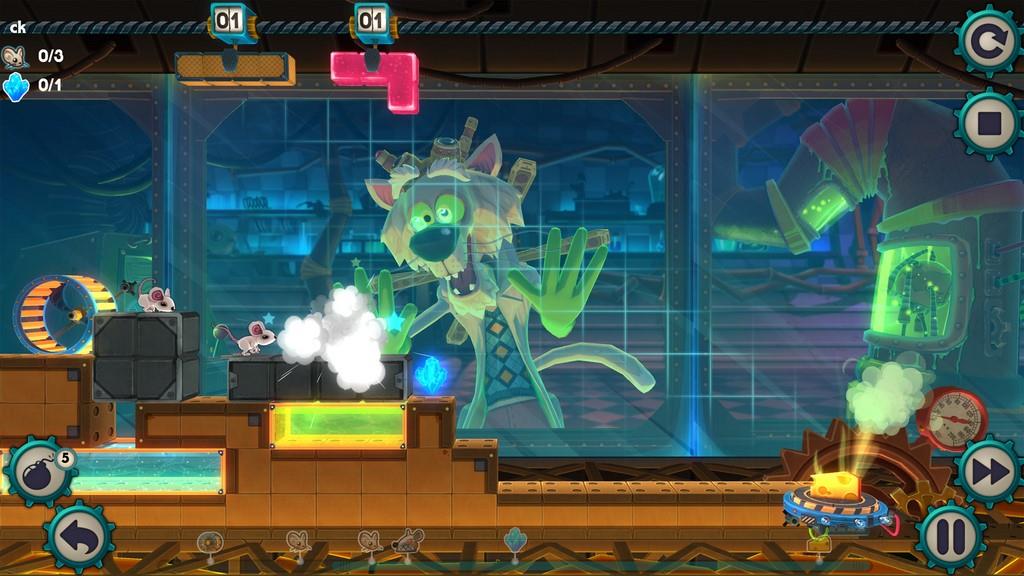 Due to its popularity, Minecraft is the first thing I think of whenever I hear any game that ends in the word "craft." Then again, I think the same thing about Apple whenever something starts with "i." Thankfully though, MouseCraft isn’t a game where you build a world for a mouse to live in. In fact, it’s a puzzle game in which you have to lead mice to cheese. Sound cliche? Well let’s take a look at MouseCraft and see how this all breaks down.

In MouseCraft, you help a cat known as Schrodinger, a scientist who has dedicated his life to studying the concept of creating energy with "mice motion." While he’s not in it for the money, his experiments have run him pretty dry in the cheese market, so he’s forced to spend what’s left of his savings to buy the last few pieces of cheese, place them sparingly in his invention, and hope that something positive comes out of it. What we get from that is an interesting point-A-to-point-B puzzle game that blends elements of Tetris and Lemmings or Mario vs. Donkey Kong (any of the Minis games), depending on how you look at it.

The goal of each stage is to get at least one mouse from the starting point to the cheese, wherever it may be. This is done by placing tetriminos (yes, the blocks from Tetris) throughout the stage, the sending the mice blindly on their way. The mice basically move automatically and have set rules that they follow. However, if you want to complete a stage perfectly, you must not only get each mouse to the goal, but also collect each anima shard. The anima shards allow Schrodinger to purchase more cheese to continue his experiments. You have to collect a certain number of shards before you can proceed to the next section.,

At the start, you only have to worry about setting a couple of tetriminos and letting the mice do their thing. But as the game progresses, you get new items and obstacles thrown in your path. These range from new types of blocks to stage hazards to even mechanical rodents that Schrodinger used in a failed experiment. Leave it to a cat to make up for that kind of failure by using real mice. A new item will get thrown in every few levels, helping keep things fresh.

At its core, MouseCraft looks pretty simple, but if it was just put down a few blocks and press Go, this wouldn’t be all that fun or challenging. Thankfully the new items and obstacles you get along the way keep things fresh every few stages. It also helps that the first stage or two after obtaining a new item serves as a tutorial for that item. For instance, a good ways through the game you get the water hazard. Instead of just throwing everything you’ve learned at you at once, the very next stage is a rather easy one, but it teaches you what the water hazard can do as well as the mice’s limitations while in it. It’s like learning something for the first time, then having someone say, "Okay, now you try." 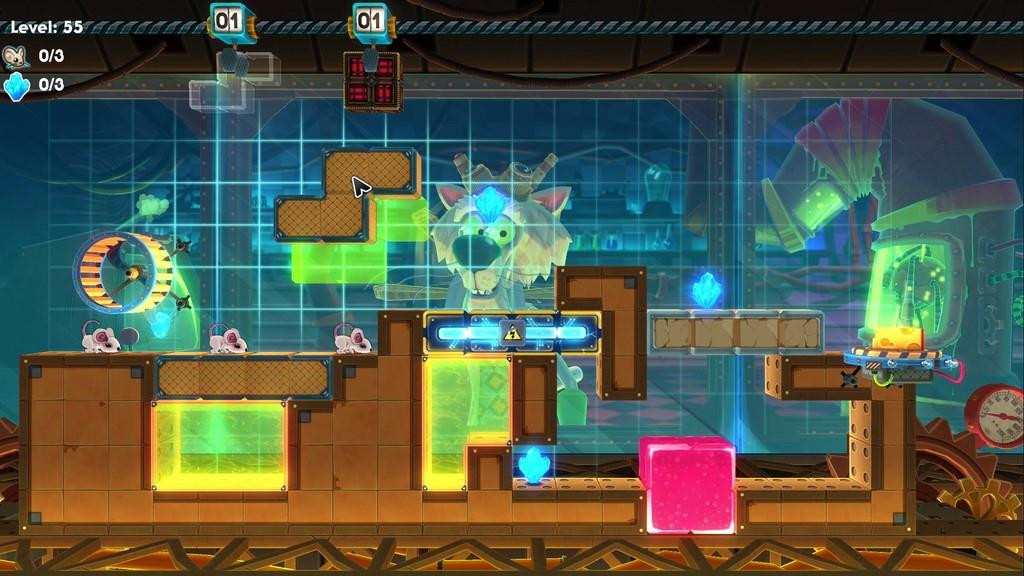 If you’re having a difficult time on a puzzle, you can actually pause the stage and think things through, even after the mice have been let loose. You can even set blocks and use bombs (once you learn about those) while paused. This is very useful once precise timing comes into play, as you can think about what you have to do and get the timing down in your head before putting it to use, as opposed to constantly guessing while the stage is running and having to constantly restart due to failed attempts. There’s also an undo button just in case you do mess up. And, believe me, I had to constantly use that thing after misplacing blocks over and over again.

With the introduction of the new items as the game progresses, it definitely keeps things fresh. Just when you think you’re going to get tired of the same thing over and over again, a new item comes along to freshen things up and add a new challenge to the mix. Once the tutorial stage for that item is done, it’s time to see if you can put everything you’ve learned so far to the test and collect each anima shard.

If you think the puzzles in the main story just aren’t challenging enough, you can create your own masterpieces to run through. You can create levels as large as 99 blocks wide and use any obstacle you want, even if you haven’t unlocked it yet. You can make puzzles as easy or as sadistic as you like. There are a couple of things about this, though, that I thought could use some improvement. 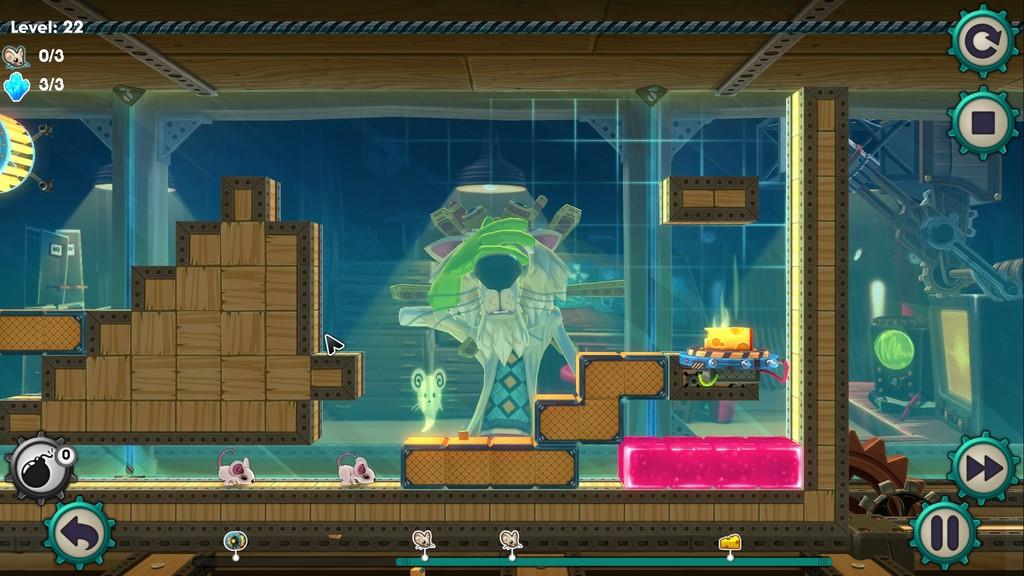 Since I just mentioned it, let’s start this section off with the level editor. While it is pretty robust in what you can do with it, there are two things that kind of bother me. The first is that, as stated, you have every obstacle available from the start, including every block type and the robot rats. In a way, that’s nice; but I wouldn’t have minded having to unlock those as I go. Basically, the further you get in story mode, the more items you unlock to use. Still, this is just a minor nitpick more than anything. The other issue with the level editor is that, at least at the time of this writing, there seems to be no way to share your levels. It would be awesome to be able to create your own levels, then upload them to allow others to download and run through.

The other issue to talk about is the difficulty. As far as puzzle games go, this seems to have a medium difficulty to it. While new obstacles can add some challenge to things, the fact that you can pause the game and even place blocks while paused kind of takes out a bit of the challenge. I’m not saying that’s a bad thing, as on more than one occasion I’ve had to utilize both pause and undo--at the same time, in fact. With some puzzle games, though, you have a limited amount of time to figure things out before you have to say, "Okay, just take the minimal effort to finish the stage and I’ll come back to it later." With MouseCraft, though, you can pause every so often to get a look at the field and place things how you want them placed. You have all the time in the world to figure out how to get a perfect on a stage with nothing rushing you. 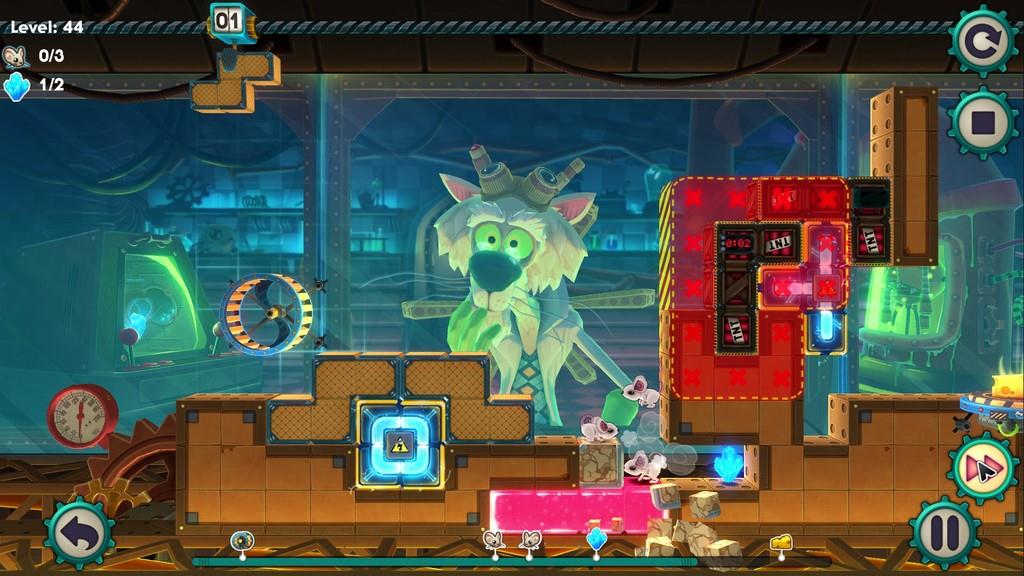 That’s just about all there is to it. MouseCraft is a fun and interesting game that blends Tetris and the later Mario vs. Donkey Kong games. I say that as opposed to Lemmings because with the former you have to lead the minis to the goal while hitting switches and such, whereas in Lemmings you have to make the lemmings do things such as dig and build to get to the goal. In other words, you can command the Lemmings to do things while the minis just keep walking within their own boundaries.

While the game is fun, I’m a little worried that gamers with a lot of puzzle-game experience under their belts might find MouseCraft a bit on the simple side. Now, granted, they could just decide to not use the pause and undo commands and just see where their ideas take them. But, at the same time, if you’re looking to just do the bare minimum, this game won’t take you very long to complete. However, if you’re like me and want to try to get a perfect on each stage the first time through it, you’ll find a decent level of challenge, and the new obstacles you unlock are fun to mess around with and combine with everything else you’ve learned up to that point. In the end, if you like puzzle games, you should definitely give MouseCraft a try.

MouseCraft is a fun game, but the difficulty seems to skew a bit on the easy side with the ability to pause mid-level and undo any action. Still, unlocking new obstacles every few stages keeps things fresh, and going for perfect levels will force you to stop and think about how to do things--as opposed to just laying a few blocks and calling it a day. Give Mousecraft a shot.