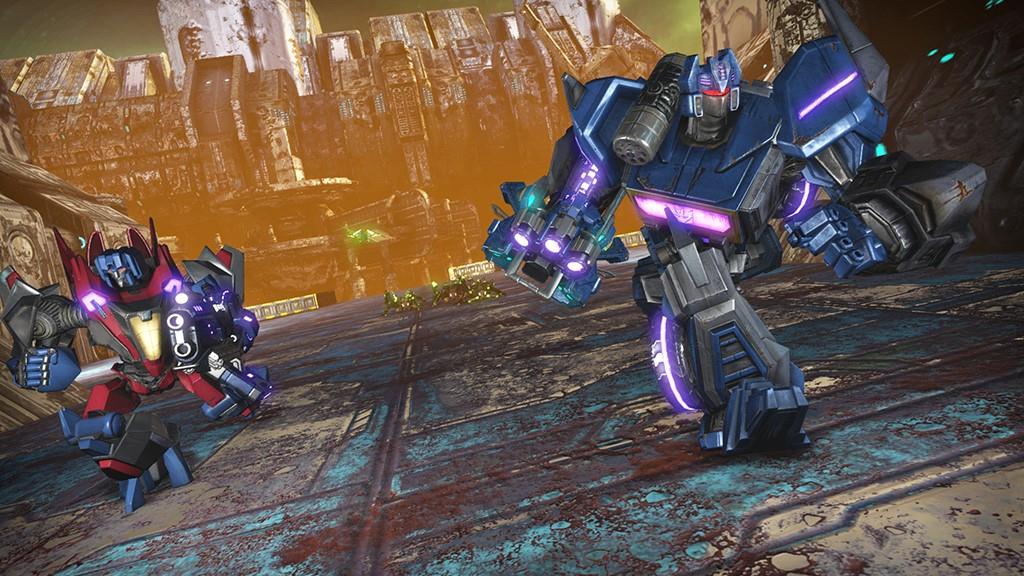 Transformers: Rise of the Dark Spark

Written by Sean Colleli on 7/28/2014 for WiiU
More On: Transformers: Rise of the Dark Spark

I’m largely ambivalent toward the Transformers franchise. I’ve never been able to take the cartoons seriously—not with utterly toyetic character names like Starscream, Soundwave and Megatron. I can only assume that the tiresome Michael Bay movies succeed purely on a concoction of nostalgia and explosions. Still, I fully acknowledge that a lot of people have very fond memories of the Transformers and hold them as dearly as I do the crew of the USS Enterprise or the Teenage Mutant Ninja Turtles. High Moon Studios even developed a couple of really good games based on the original series: War for Cybertron and Fall of Cybertron.

The latest game, Transformers: Rise of the Dark Spark is unfortunately a clunky mess. Developed by Edge of Reality, it tries to co-opt many of the gameplay concepts from the previous two games by High Moon but the execution seems rushed, and the attempts to merge the continuity of the animated series and that of the Michael Bay movies just results in confusion.

The plot kicks off with the Decepticons acquiring the Dark Spark, a super-powered MacGuffin that basically means bad news for the Autobots. Peter Cullen is happily chewing the scenery as Optimus Prime, waxing poetic about how much he loves humans and how honorable they are, when the Decepticons get their hands on the Dark Spark and things go sideways. That is, they would, but the game quickly cuts to a period before Fall of Cybertron, where the Decepticons are trying to get the Dark Spark in the past. Confused? Don’t feel bad; I’m sure even a die-hard Transformers fan would be a little perplexed.

Edge of Reality at least tries to show an interesting contrast between the old and new transformers. In the levels that take place in the past, the transformers have the blockier, more toy-like appearance from the '80s cartoon. In the present-day level, Optimus and his buddies have the ugly, overcomplicated design from the Michael Bay flicks. This establishes an intriguing shift in setting and makes a plausible case for why the transformers look so different between the movies and, well, everything else. It is pretty jarring, though; imagine if the growly Christian Bale Batman and Tom Hardy’s Bane showed up in Arkham Knight with absolutely no explanation.

This aesthetic shift also doesn’t change the fact that the Bayformers are hideous nondescript masses of pistons and sheet metal, making it really difficult to differentiate between friend and foe. Like War and Fall of Cybertron this game is at its core a third person shooter, and homogenous character design is a bad, bad thing in a shooter. On more than one occasion I dumped an entire magazine into Bumblebee or Optimus Prime without realizing that the enemies had circled around behind me. Until you memorize the handful of repeating enemy character models there isn’t much to discern them from your allies. 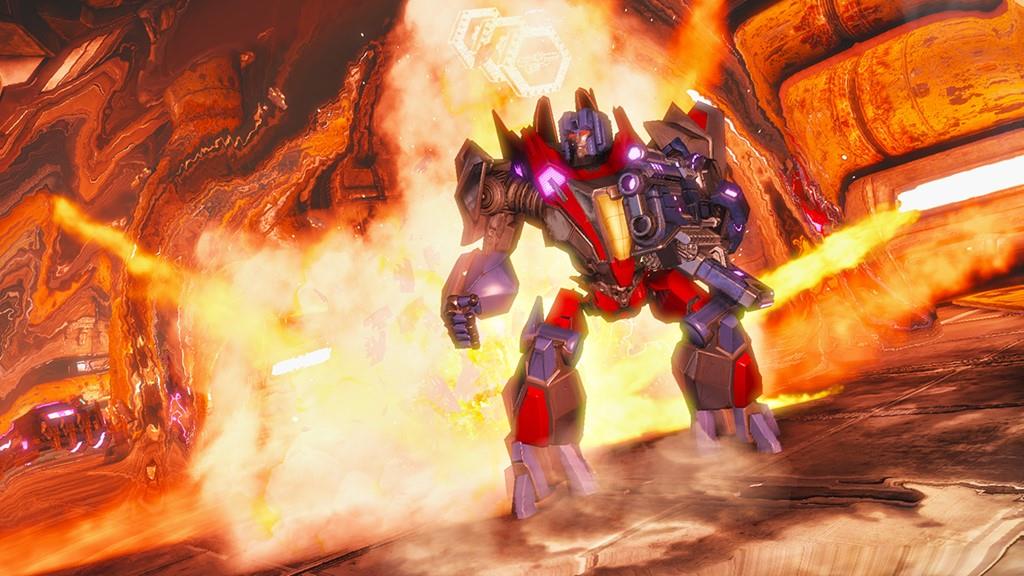 Of course, this wouldn’t be nearly as big an issue if the game had a serviceable framerate. I don’t know how the game runs on other platforms, but on Wii U, Dark Spark is a stutter-fest. I knew it was a bad sign when the nausea-inducing framerate got me killed repeatedly only a few minutes into the relatively sparse, simple tutorial level. Sadly it’s all downhill from there. As the level geometry gets more complicated and the game throws Michael Bay-appropriate levels of chaos at you, the framerate becomes near-unplayable. Persistent screen-tearing and perpetual texture pop-in contribute to a consistently unpleasant experience as each level wears on. It’s clear that the developers had little time to optimize this game for Wii U.

If you can ignore the framerate and other graphical glitches, you’ll find the gameplay in Dark Spark to be pretty rudimentary. It’s a third-person shooter with no solid cover mechanic, consisting mostly of open battles in corridors and mid-sized rooms. Objectives are pretty standard: kill enemies to open a door, explore a room and flip switches, drop off and defend a cleaning robot as it mucks out sewer pipes. The combat wears out its welcome by the end of the first level, however, and quickly becomes tedious. There is a surprisingly varied arsenal of weapons, upgrades and perks to try out, but you’ll just be killing the same boring enemies over and over so there’s little joy in the mechanical carnage. The weapons have no punch, and the enemies don’t even shatter and explode satisfyingly; they just fall over, arc for a few seconds, and vanish abruptly. 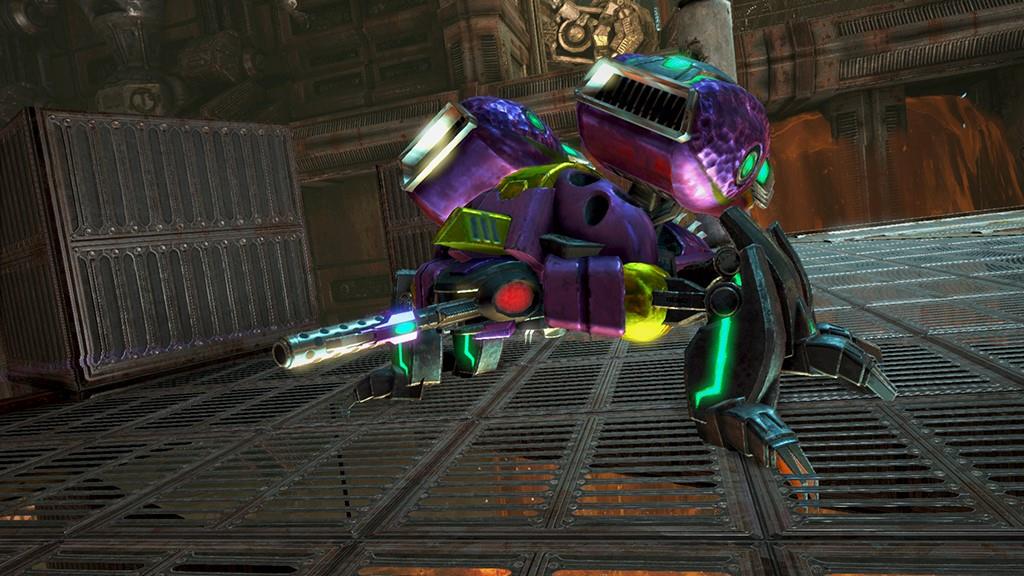 The defining aspect of the Transformers—their ability to transform into vehicles—is also tragically underused. Turning into a car makes the already awkward controls even more cumbersome, so it’s actually a tactical disadvantage to transform. You don’t move much faster as a vehicle and anytime that you save, speeding is negated by the lengthy transforming animation so it’s rarely worth the effort. The only time transforming is actually interesting or fun is when you are a character that turns into a jet fighter or some other aerial craft, but more often than not this is only useful for scripted situations in large, spacious rooms.

This is a real shame as the iconic individual transformations were a big part of High Moon’s two games—it was the one element they really nailed perfectly. In Dark Spark transforming feels obligatory, with very little impetus to transform unless the situation specifically calls for it. I used the feature so little that at times I actually forgot it was there.

The remainder of Dark Spark is pretty boilerplate. There are occasional stunning and vast environments, marred by texture pop as they are. But for the most part, level design is narrow and linear. The majority of textures are flat and recycled, and the enemy types begin to run together early on. The one exception would be the Transformers themselves, even the overly-busy Bayformers. The models are highly detailed and well animated, each with its own unique transformation and even some clever idle animations of spinning gears, clicking machinery and subtle bloom glow. It’s just difficult to appreciate any of this with such a jerky, uneven framerate. 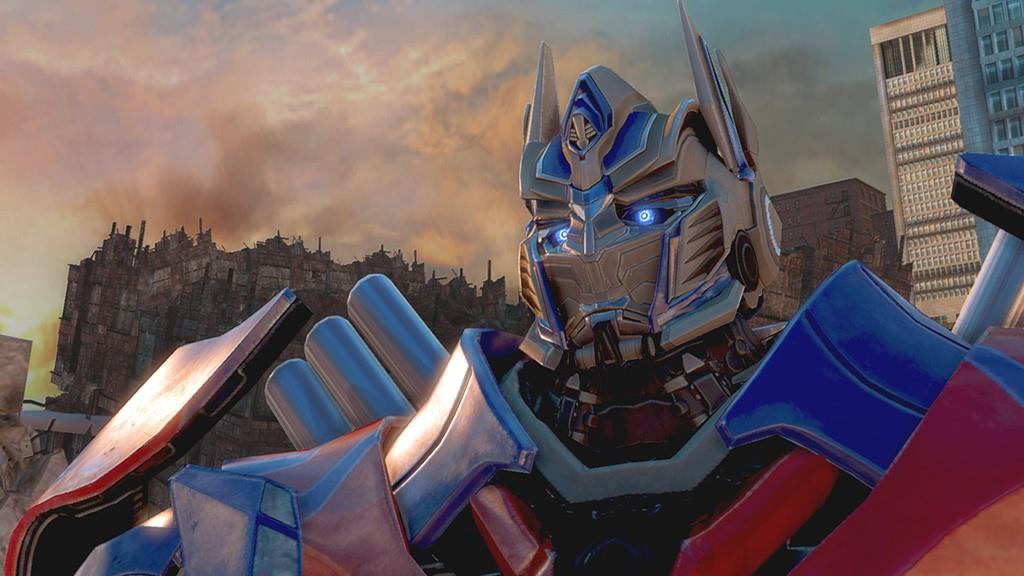 The music is, on the whole, the exception to the rest of the game’s mediocrity. It’s pretty similar to Steve Jablonksy’s work on the films but is suitably grand and sweeping. In terms of voice acting it’s always nice to hear Peter Cullen return, growling out his optimistic dialogue like the second dad a lot of '80s kids wish they’d had. The other actors do an okay job with their dialogue (the excessively nefarious Decepticons are as cringe-inducing as ever) but let’s give these actors some credit: it’s probably pretty hard to keep a straight face and nail your delivery when you’re handed a script like this.

To be honest, that’s kind of how I feel about this whole enterprise. After four painfully terrible movies and tie-in games like this, how can anyone take this franchise seriously anymore, much less spend so much money on it? The only answer I can think of is nostalgia, and the good games like Fall of Cybertron that keep the nostalgia alive. In that light, I recommend that you vote with your wallet. If you are a Transformers fan, support the games and merchandise that are at least respectful of the franchise you love. Don’t even give Rise of the Dark Spark a rent, unless you want a framerate headache and a serious case of disappointment.

Transformers: Rise of the Dark Spark tries to coast on the goodwill established by the previous two games, but mishandles their gameplay concepts with a badly rushed execution. Boring level design, an awful framerate and a confusing story make this game a slog from start to finish.