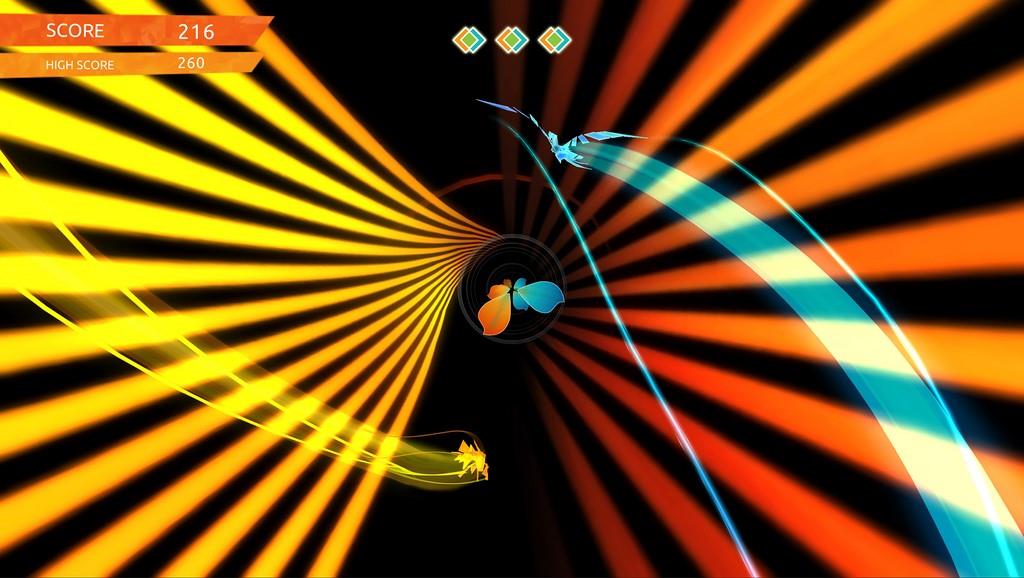 Few games get the honor of being shown on the main stage at E3, but indie title Entwined from Pixelopus was lucky enough to get a few minutes of Sony's stage time at this years E3. Even among juggernauts like Far Cry 4 and Destiny, Entwined managed to have a strong showing, instantly charming viewers with its colorful origami art style and simple action-rhythm gameplay. When it was announced that the game would be releasing that night, it seemed that Entwined would be a surefire indie hit like Journey and The Unfinished Swan. Instead the game just proved that looks can be deceiving. What appeared to be a fast and fun rhythm experience ends up being a monotonous and frustrating journey that fails to reach any level of poignancy.

Entwined is the story of two souls, one a fish and the other a bird, that want to be together but cannot. Why this is, exactly, is never explained, but we do know that with the help of the player these souls can combine to become a beautiful dragon. In order to do this, the player must guide them through a series of hoops. The fish and bird are traveling down a tube, each occupying one half of its circumference. You move them with the analog sticks, their movements mirroring your positioning of the sticks, but never moving from their half of the tube.

As they barrel forward you will see colored shapes in your path. Blue for the bird, orange for the fish, green for when they need to be close together. Between obstacles you pick up gems that fill up two meters. Similar to rhythm games like Dance Dance Revolution, failing to hit the obstacles correctly drops the meter and makes it harder to complete the stage. If you manage to fill both meters all the way you can begin fusing the souls. If you can continue to pass through obstacles successfully during the fusion process, the two souls become a dragon and you enter the final area of the stage. The end of each stage is a large area that you are allowed to freely roam through. You control your newly formed dragon with both sticks, and their inputs must agree for it to fly smoothly. Your only task in this area is to collect orbs to fill one more meter so that you can advance to the next level.

Each new level follows this same template, only with harder obstacles. With only nine levels in the game, you would think the game could keep things fresh, but I was tired of flying through hoops by the time I reached the third stage. The only thing different between stages are obstacle configurations, but each stage has so few configurations that you will notice them repeating very quickly. After you've seen them all, you just want to finish the level, but you cannot until those slow moving meters are filled. Then you must do the fusion, which requires neat perfect play for short time. If there are one or two obstacles you struggle with, they are likely to come up and ruin your fusion, forcing you back to the meter-filling portion of the game. I only ended up getting stuck once near the end of the game, but it really showed me just how repetitive the game was as I bashed my head against the same series of obstacles over and over. Even the simple dragon section can be frustrating if you aren't used to inverted control, but it is generally a sigh of relief after a rough fusion. 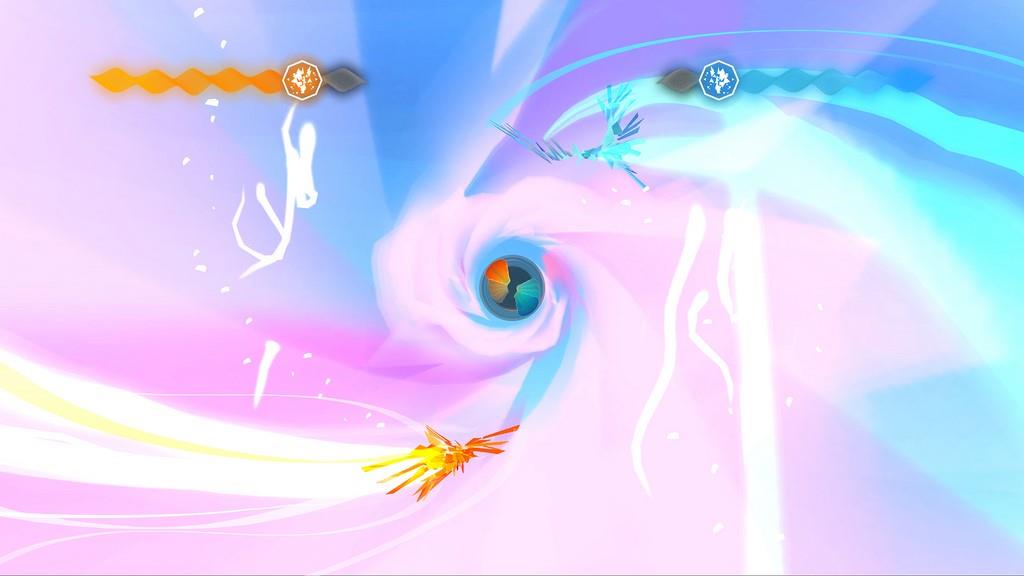 Graphics and sound are the game's one major success, creating a wonderfully tranquil environment with a range of soft melodies and adventurous tunes to go along with the papercraft style. Lag was occasionally an issue, but never enough to ruin my ability to play. However, it feels like Entwined was reaching for something more, hoping to touch audience emotions in the same way that now-famous games like the aforementioned Journey did, but it never managed to have such an effect on me. Challenge modes with leaderboard support are there for anyone who really loves the gameplay, but I couldn't bring myself to play any more after finishing the main story.

With such a simple and fun mechanic, Entwined should be all about the joy of simply playing, but it lets its own mechanics (collecting gems to fill meters, fusion) muddy up the simplicity. Did it ever have a shot at becoming the next big indie hit? Maybe. But it also shows that a few missteps can quickly drag a good idea down.

At only two hours in length, Entwined could have been a short but sweet action rhythm game, but a number of small issues add up to big problems.