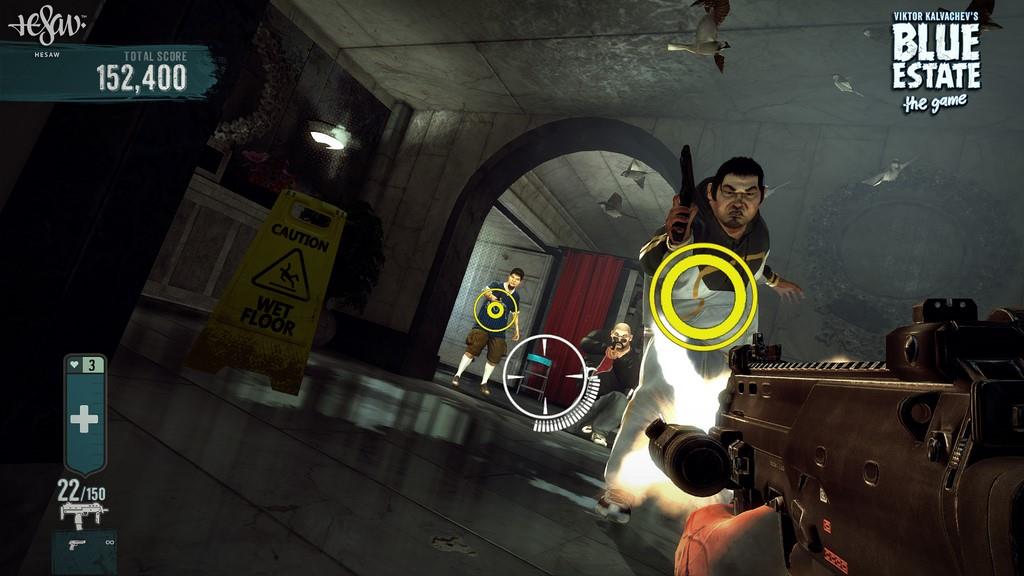 Blue Estate is one of those games that reminds me how much I used to love light gun games in the arcade and on home consoles. With an eye towards the cinematic, 1990s-era light gun games were the best way to feel like you were part of a big-budget Hollywood action movie. Unfortunately, Blue Estate also reminds me that this style of game is often too shallow and quickly runs out of fresh material.

On second thought, I should probably stop calling Blue Estate a "light gun game." While it looks and sounds like the typical on-rails light gun game made famous in the arcade, it's missing one major component—the light gun. In fact, this PlayStation 4 shooter doesn't even offer Move support, arguably the closest thing the system has to a light gun. Instead, all of the aiming is controlled using the DualShock 4's internal gyroscope mechanic.

As unbelievable as it sounds, the PlayStation 4's controller does a relatively good job keeping up with the action. It's far from perfect (as we'll get into later in this review), but I was usually able to line up my shot after a little practice. Purists will complain that using the DualShock 4 is not the same as looking down the sights of a real light gun. They're right, of course, but I would be lying if I said I wasn't impressed by how close the controller felt to the real deal.

Mechanically, Blue Estate is a cross between Time Crisis and Bulletstorm. It's not just about shooting bad guys before they get you, but also keeping your combo alive and hitting bonus objects for extra points. This is not restricted to shooting, either. The game also forces players to perform quick time events by swiping the DualShock 4's rarely used touchpad. This is often used to pick up items and open doors, though players will also find themselves dodging attacks, returning thrown objects and even pushing their unruly hair back with the touchpad.

Blue Estate is told through a series of pulpy crime novels, which allows it to be over the top in a lot of good (and sometimes very, very bad) ways. The game stars Tony and Clarence as antiheroes on a quest to kill bad guys. Of course there's more to it than that (including a Kim Jong-Un lookalike, a race horse, an incredibly valuable potted plant, etc.), but sadly this game is more interested in making forced jokes and pop-culture references than telling anything resembling a coherent narrative. If you've been waiting for a light gun game to spend all of its time making fun of popular action movies, then Blue Estate may be your pick for Game of the Year.

While I'm sure fans of Duke Nukem Forever will get a kick out of the ribald comedy, I found that most of the writing left me groaning. The joke construction is obvious, but the bits always land with a thud. There are plenty of points to be made about the absurdity of action films, but instead Blue Estate opts for the laziest geek references they could think of. The narrator rants about Game of Thrones, there are constant John Woo references and, yes, that statue over there does look like the Death Star.

Even worse is when the game overuses its jokes. There's a bit early on where our "hero," Tony, jumps around so much that his long hair gets in his eyes. "I should have brought more gel," he quips. You then have to swipe the touchscreen to wipe away the hair, which is a genuinely inspired bit. Unfortunately, this clever gag gets trotted out dozens of times in every level, usually with the same boring one-liner.

Ignoring the lazy writing, the action staging is actually quite impressive. Both Tony and Clarence are a lot more nimble than your typical light gun hero. I was surprised by how much jumping and moving there was, especially for an on-rails shooter. The game has fun playing with its camera angles, such as when Tony has to shoot while laying upside down or when he leaps sideways in slow motion. If nothing else, Blue Estate is an enjoyable rollercoaster ride.

The action-packed levels look great and are fun to watch, but they are marred by the gameplay. While I was largely impressed by the DualShock 4's aiming, I couldn't shake the feeling that the collision detection was off. It often felt like enemies would take eight or nine bullets to kill, which meant I was constantly taking damage while reloading. Later levels require headshots, which never felt consistently accurate. It's also a shame you can't manually adjust the aim speed, as the cursor moves at a snail's pace.

Fans of this specific brand of light gun game will enjoy the fast-paced action and rollercoaster ride, even if the jokes are lame and the story is incomprehensible. It's a shame that some of the gameplay problems overshadow what could have been another great light gun shooter. Blue Estate is the best and worst of the genre in one $20 game.

Blue Estate is a light gun game that doesn't use a light gun. Grab your DualShock 4, because this on-rails shooter uses gyroscope technology to take players through eight exciting stages. Too bad the jokes are awful and the gameplay isn't as accurate as needed, because Blue Estate does a great job of staging action.