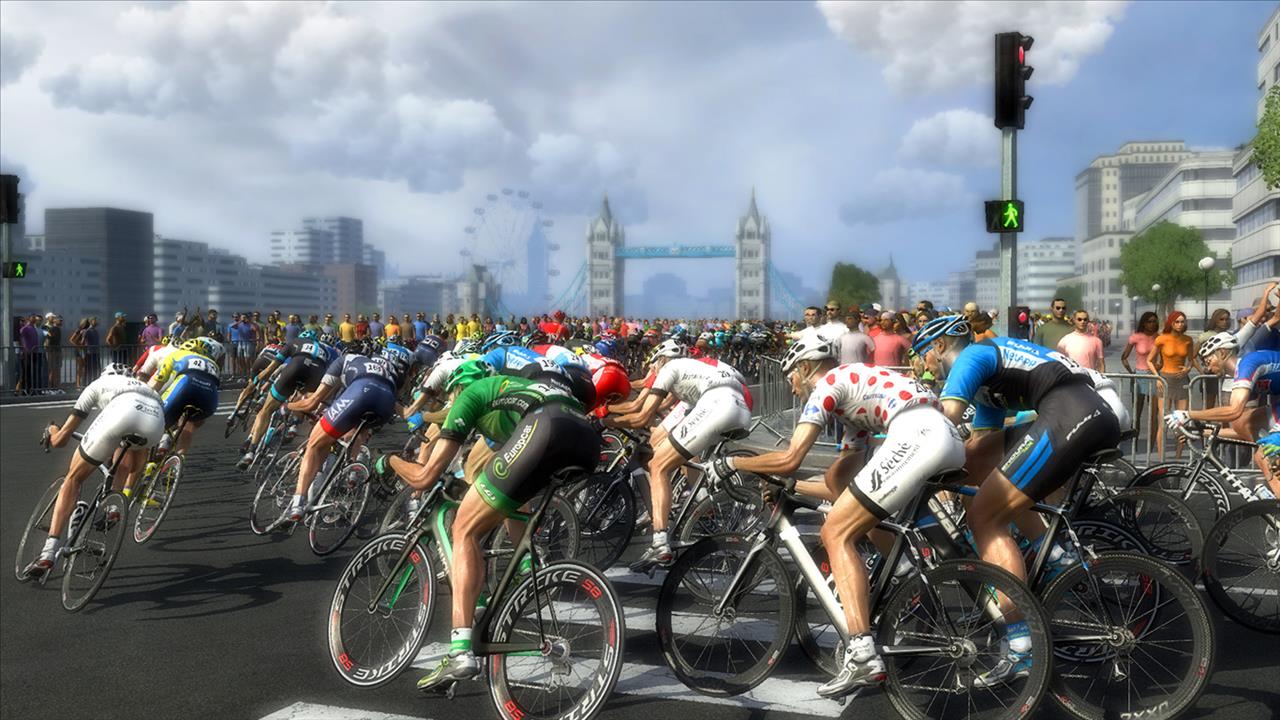 Cycling was already a niche sport in the US even before Lance Armstrong finally admitted to doping, which explains why for several years, Pro Cycling Manager wasn’t actively marketed to US gamers. Thankfully, as cycling looks to clean up its act, there has been some renewed interest in marketing the sport to the US (An example, NBC Sports Network is basically devoting the entire month of July to the tour). Along with an improved presence in the US market, Cyanide Studio has packed several new features on top of some minor improvements to last year’s release bringing us Pro Cycling Manager 2014.

Pro Cycling Manager is primarily a cycling simulator where the gamer plays the role of a Director Sportif (Sporting Director) for a professional cycling team. You choose from the 3 levels of pro cycling (Continental, Pro-Continental, or the highest level, the Pro Tour), and pick from existing teams, or start your own custom team signing riders to contracts that fit the level of cycling you want to work with.
Your goals for the game depend how successful your team is at races, meeting the goals of your teams’ sponsors, signing with the best possible equipment providers, and having your riders reach their own personal goals. You don’t have to win every race you enter to keep your sponsors and riders happy, but the game randomly picks races that your sponsor wants to see their dollars at work in, and your riders want a chance to race in events that suit their skills. 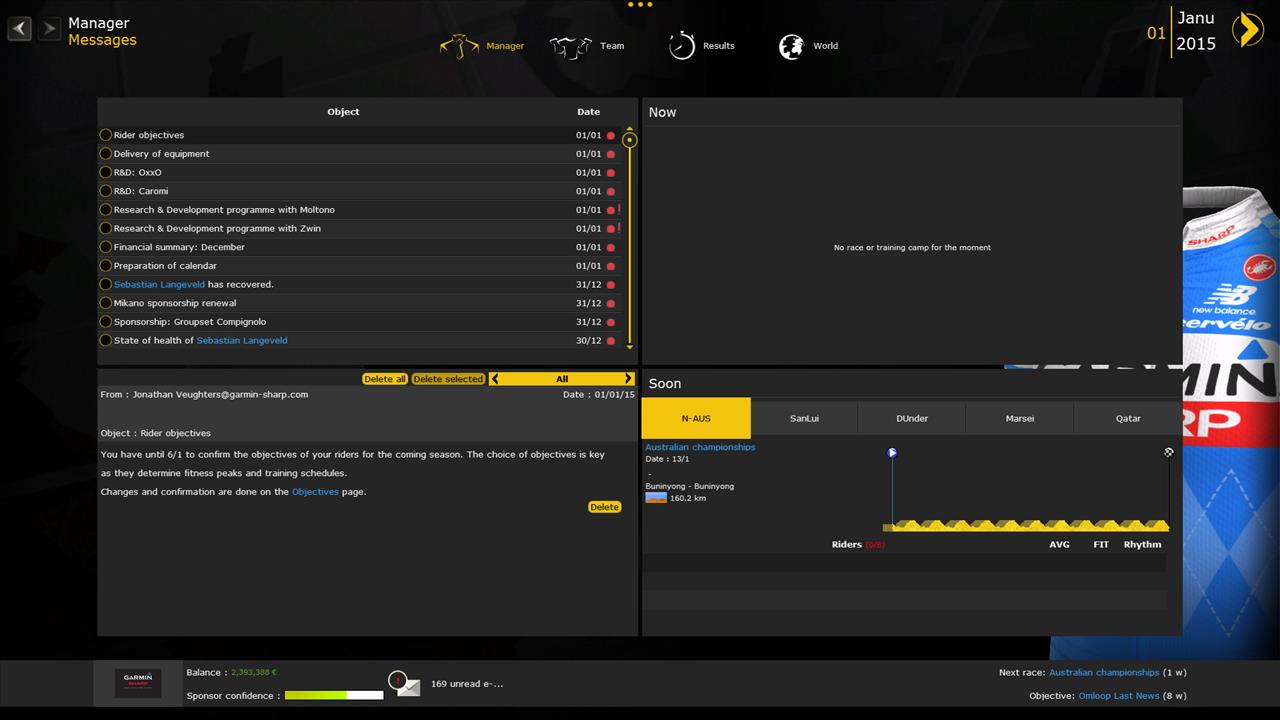 You’ll spend a majority of your time on the messages screen, which is where you get most of your management updates via “emails” within the game from your staff, your riders, your sponsors, and the cycling league you race in that provides updates on events throughout cycling. These updates give you vital information on how to proceed for future races as well as highlighting day to day issues that you need to address, including dealing with rider contracts via the more robust “transfer system” that’s been added with the 2014 edition. 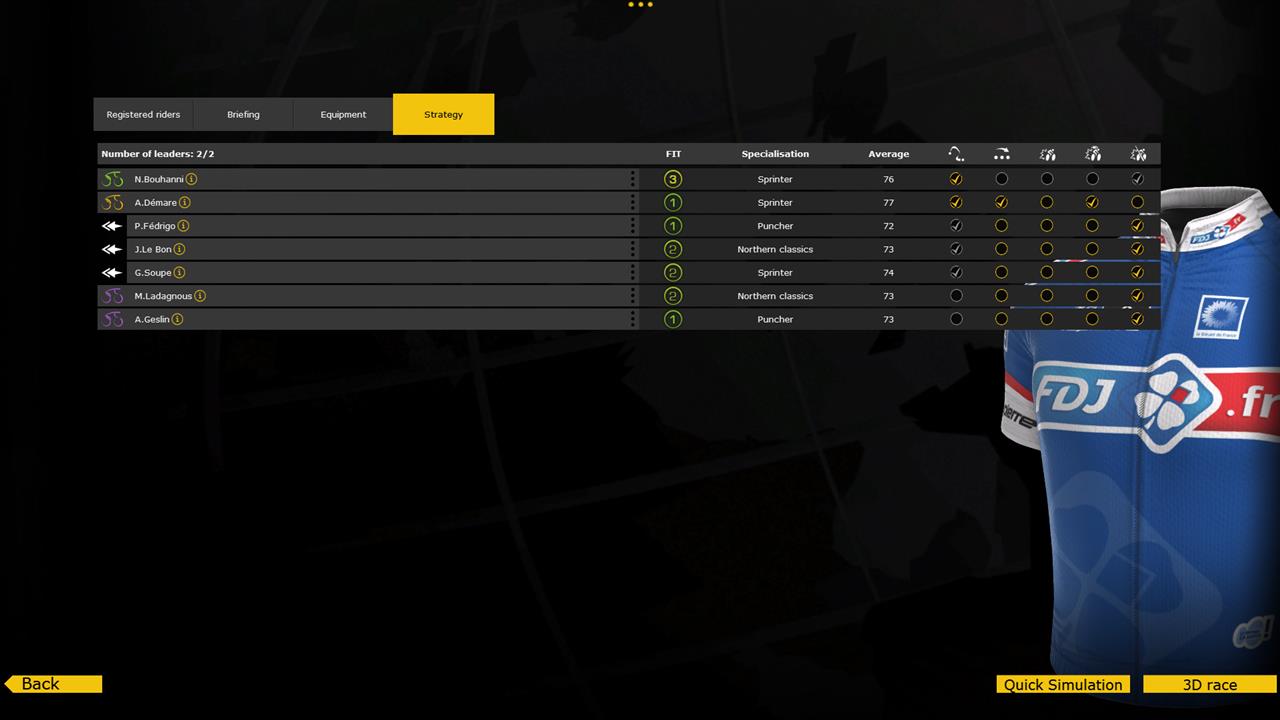 Once you’ve got your schedules set for the season, it’s time to race. As you advance through the race calendar, you’ve given the choice each day whether to actively race a given event, or get have a quick simulation performed that provides the outcome of that days racing. The simulation assumes your team will use the standard tactics for the riders you’ve entered in that day’s competition, and eliminates mistakes you might make.

The “3D Racing” however gives you that additional level of control, allowing you not just to pick the riders and their roles, but to actively make the decisions like when they attack or who needs to drop back for water bottles. Each day the game randomly modifies a rider’s fitness in the same way as a guy might wake up with a cold in the morning, and therefore isn’t racing at his best. This allows that extra bit of realism that on a mid-level riders best day, he can overtake some of the world’s best to win a race. 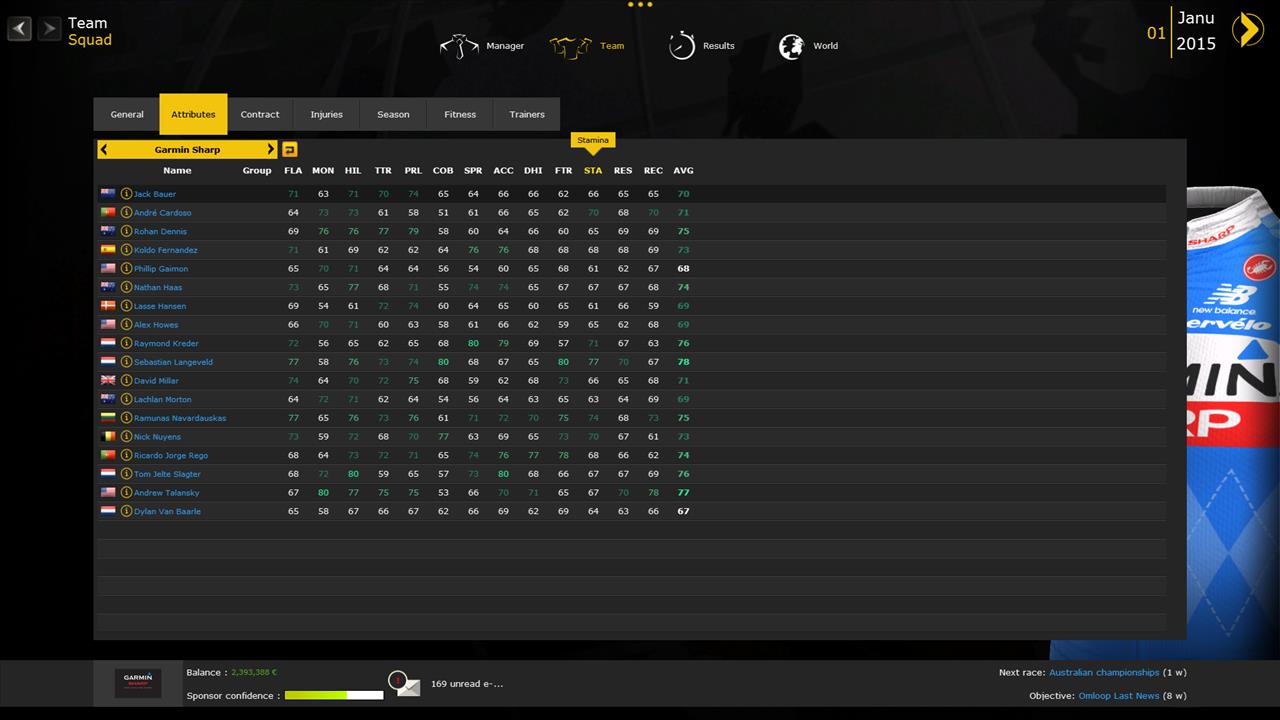 Even after a couple of years of playing PCM, I’m still working on my race strategy, but the improved tutorial as well as new pre-race strategy screen helps a lot. My first racing season with the Garmin-Sharp team in PCM 2014 was easily my most productive yet. I won the first race of the season, putting one of my riders in the Australian National Champions jersey. A couple of months later, I picked the right guy on the right day and rode in a day long solo breakaway over 160 kilometers to come from 8 minutes down to take an 11 minute race lead that I held on to for the next two days to win the Tour of Turkey. I followed that up with successful 1 day classics campaign, winning or making the podium in several of the most storied races in cycling. While it isn’t the same as winning the Tour de France, I was excited to take the step in learning how to identify the riders best suited for a given race or stage. 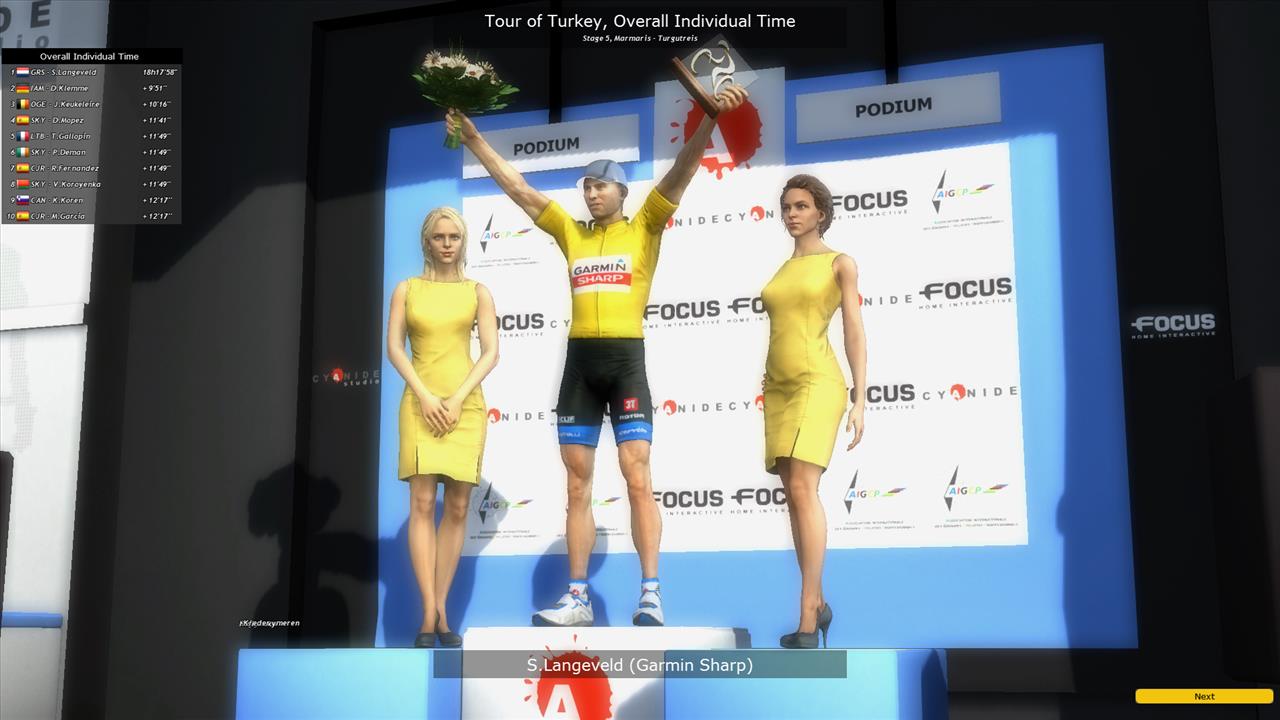 Graphically the game is mesmerizing; while the rider animations are very nice, and the races are exciting to watch, the game really shines in showing the countryside the races make their way through. Authentic details, like the landmarks for the Tour of Britain including the London Eye and Tower bridge, to the familiar sights of the Champs –Elysees during the final day of the Tour de France. 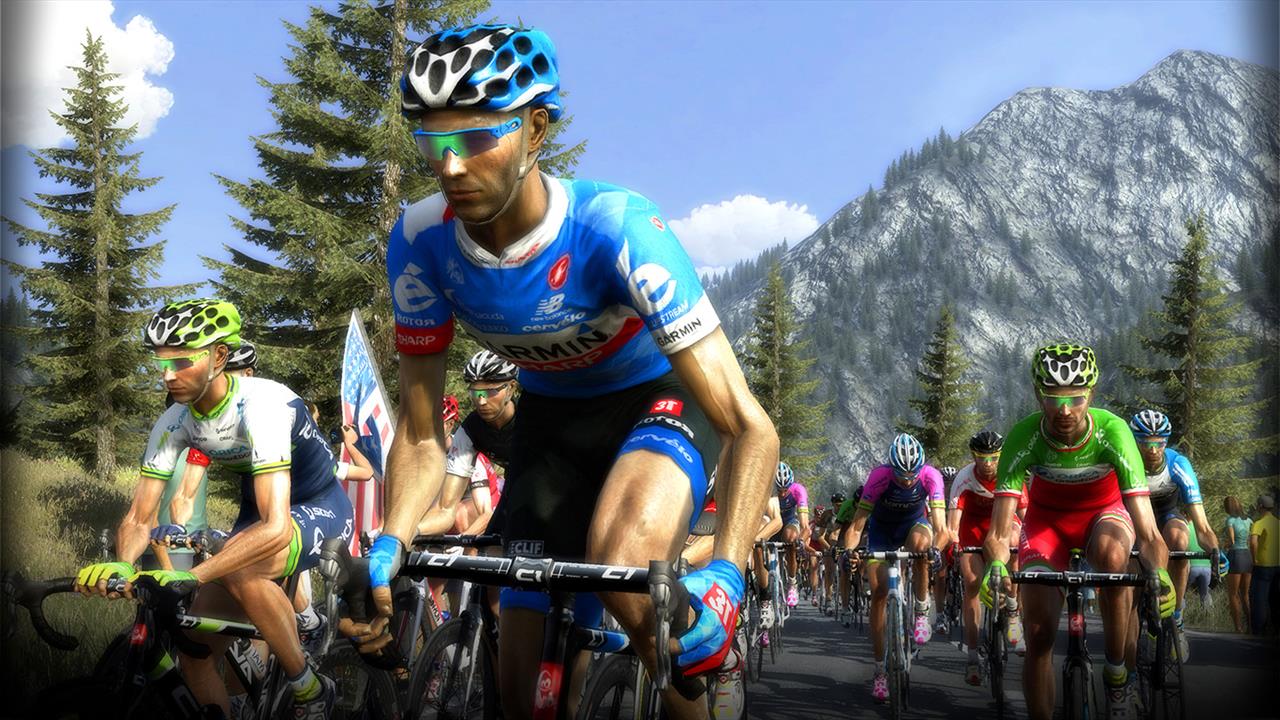 Once you’re ready to test your management skills, you can participate in an online mode against other managers. Unfortunately, that feature wasn’t available to me during the pre-release window, but I understand it has similar functionality to the online career modes in the EA franchises, including earning collectible card packs you can utilize to improve your team.

Finally, if you’ve had enough of management and just want to race, you can take a break from the detailed aspects of the game, you can do some track cycling, which is very much like NASCAR for bicycles. A wooden track, a few racers, and high speeds with simple controls make for a nice change of pace from the day to day fine point management required to be successful in PCM.

There really is a lot for any hard core cycling fan to love in this game. Most of the ProTour teams appear, with nearly all of the worlds best riders represented. The graphics engine was really ramped up this year, and it makes a tremendous difference. The enhanced transfer system really adds a feel of battling against other teams for the best riders. The new equipment sponsor system gives you the ability to have input on R&D for bikes and wheels, which adds additional depth to the selection of what your riders use. My favorite new feature was the tutorial; I felt like I understood so much more about the how I could best utilize my riders in the race, and prepare them before the races.

Unlike other pro sports, Cyclists do not have a true union, so in signing the deal with the AIGCP, Cyanide was not automatically given the rights to the names and likenesses of guys like Chris Froome, Bradley Wiggins and others. Missing these riders means that the game makers went with “sound alike names” such as Chris Vroome. It’s clear who they mean, but it still takes away from the feel of the bigger races. Further, UCI registered teams and riders at the lowest level of pro cycling are simply not represented, which means you can’t just pick your favorite continental team and start racing it.

Additionally, many of the national races US fans are familiar with are simply missing from the game. While the tours of California, Utah, and Colorado are all present, the smaller but no less important races to Continental level teams such as Tour of the Redlands, Philly Cycling Classic, and nearly two dozen other UCI ranked races across the Americas are simply not present in the game at all. This makes it almost impossible to race a realistic schedule for a US or Canadian Continental team because the money simply isn’t in their budget to be racing and training in Europe all season. There are many races that follow the correct route but for some reason, likely licensing related, the name of the race is changed in a way similar to those of the riders who are not included.

The changes and additions to Pro Cycling Manager 2014 are really quite impressive. The extreme level of detail has finally been matched with top quality graphics, improved controls, and a tutorial system that gets you up and going, and most importantly, competitive in races, far more quickly. While I’d love to see Cyanide find a solution for the licensing issues for the names & likenesses of all of the riders, teams, and races in all 3 levels of cycling, those are relatively minor issues in what is a very robust sim.