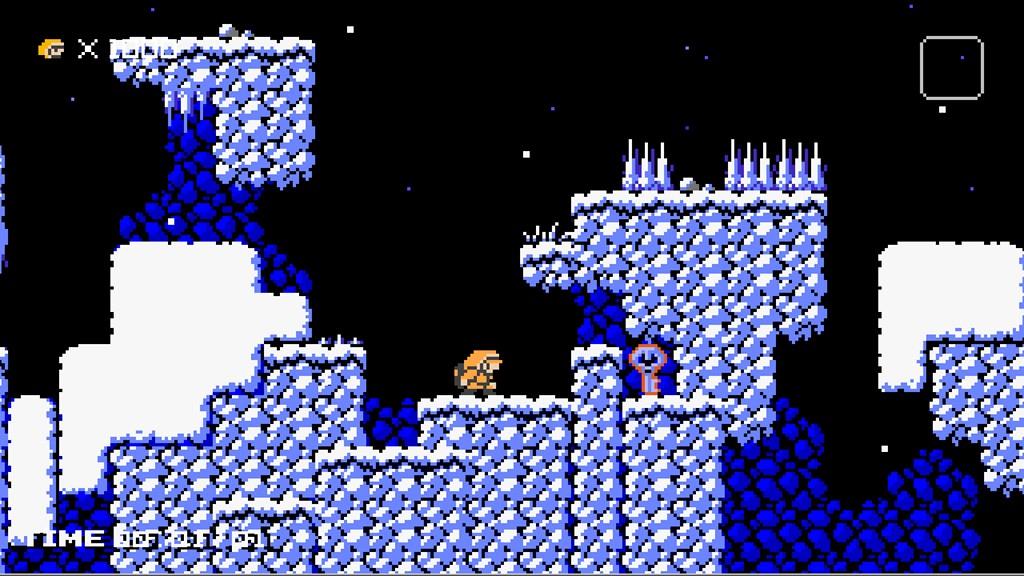 It didn't take long for me to familiarize myself with the Skip Level option in 1001 Spikes, NICALiS' masocore platformer and sequel to their 2011 Xbox Indie title Aban Hawkins & the 1000 Spikes. While skipping a level may give you a moments rest, I soon learned that rest never lasts as 1001 Spikes does everything it can to take your 1001 lives as quickly and mercilessly as it can. While difficulty may be the game's big selling point 1001 Spikes is really a homage to retro gaming in general, with beautiful pixel art and catchy chiptunes. But when difficulty is such a major part of your game you need to strike a perfect balance between frustration and fun, a balance that 1001 Spikes often fails to create.

You are Aban Hawkins, son of famous explorer Jim Hawkins. The story begins with Aban learning his father has gone missing in Antarctica, presumed dead. A flashback informs us of this father and son's tumultuous past, how Jim left his entire estate to Aban's sister, telling Aban that he should earn his own riches. As one final sleight against his son, Jim left behind a note challenging Aban to go to the Ukampa Ruins in South America and claim the treasure that is locked behind the world's deadliest traps. Aban set off for the ruins deadset on claiming the treasure and besting his father once and for all. I don't expect much story from gameplay focused platformers, but I was surprised by how much I cared about this father son rivalry, presented through detailed pixelart cutscenes. I was inspired to not only beat the game, but even work into the post game to get the extended story.

But the game certainly didn't make it easy for me. 1001 Spikes is about as traditional as it gets in terms of its controls, other than one major difference to up the difficulty. Instead of just one, 1001 Spikes has two different jump buttons, one low and one high. It is strange at first but you will catch on quickly since using the wrong jump usually means instant death. Your only other tool in the battle against Ukampa are throwing knives which can be used to counter traps, break walls, and kill enemies. The controls are usually smooth, but I did notice a short delay between jumping and throwing knives that frequently led to frustrating deaths, slowly eating away at my 1001 lives.

Then again, everything in 1001 Spikes is bound to lead to frustrating deaths. The goal is simple; get the key and reach the goal, but with well over 1001 ways to die the odds are not in your favor. There are bottomless pits, floor spikes, breakaway floors, arrow traps, rolling boulders, fireballs, scorpions, and falling ceilings. Some of these things are timed, making you learn their rhythm if you hope to get past, while others are activated by you either stepping on them or getting too close. Timed levels generally feel more fair, thanks to the zoomed out camera most of the level usually fits on one screen. This gives you a chance to sit and watch the patterns before tackling the level (though don't take too long since many levels set traps at the start to capture overly cautious players). I enjoyed the steady pace of these types of levels since I usually knew what I was up against leaving it all up to my execution. Still, there were a few levels where the patterns were a little slow, making me wait around for 10-15 seconds on each attempt totally killing the pacing. But I would take killed pacing over a killed character any day, a result I got all too often against the game's many traps. I would never argue that a game like 1001 Spikes doesn't need traps because the tension they add is a huge part of what makes the game so exhilarating. But in 1001 Spikes case I feel the traps go to far, especially the ones placed right at the goal. Being kill by a hidden spike or arrow trap at the end of a level isn't fun, its exhausting. Sometimes I felt that levels were challenging my memory and luck more than my skill.

Slowly but surely I made my way through the game's 30 levels, having legitimately completed all but two. You cannot challenge the final boss until you manage to beat them all, but lucky for me you can use coins earned from the game's bonus modes to buy true level skips from an in game store. I was finally able to beat the last boss and see the game's end. Without spoiling too much, I will say there is some post game content, and I wasn't able to complete all of that either. In addition to that, there are the aforementioned bonus modes. One is a Ghosts and Goblins-esque mode called Tower of NaNNAR that challenges you to climb a trap and enemy filled tower to save a damsel in distress (and collect coins). You can tackle this challenge as Aban, or as a number of unlockable characters. Characters range from indie stars like Commander Video to retro references like Slayer Aban who moves and attacks like Simon Belmont, whip and all. You can use these alternate characters to tackle the main game, using their unique skills (such as double-jumping and dashing) to breeze through the levels. You can also use them in the Lost Levels mode, which I assumed would be extra hard challenge maps but turned out being some simpler, more traditional feeling platforming levels. Of all the extra modes the Tower of Nannar was the most fun, finding a good balance and simple fun and challenge. All of these optional modes net you coins that can buy more characters, extra lives, level skips, and much more.

Of all its retro references, graphics and music are the ones 1001 Spikes does best. It's pixelart looks simple enough to be from the NES days, but is packed full of tiny character and environmental details that retro enthusiasts will love. The characters models are emotive with fluid movement, and the environments are beautiful and varied. Its the music that gets my top honors though. Every track is lively, frantic, catchy, and never wore me down even after hearing them 50+ times. As a bonus each track has two modes, with the second speedier mode activating after you grab the key. Even now I can't get some of them out my head. Even if you choose not to play the game be sure to find the soundtrack somewhere.

While the feeling of finally completing a rough stage in 1001 Spikes is undeniably sweet, the agonizing frustration leading up to that moment far outweighs it. That balance of fun and fury is so key to a success in the masocore genre, and 1001 Spikes fails to find it. If you have a soft spot for punishing games with a retro style 1001 Spikes is for you, but I imagine that even the most hardened fans of masocore games will find themselves shaking their heads at some of these levels.

There is a fun retro platformer in 1001 Spikes somewhere, but the frustration I felt while looking for it left me exhausted by the end.