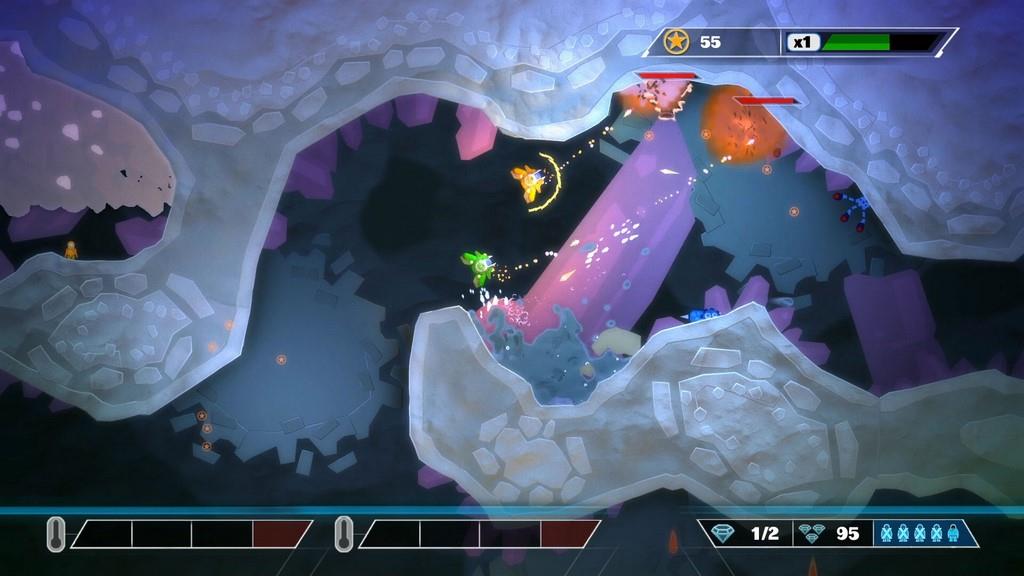 Written by Cyril Lachel on 6/23/2014 for PS4
More On: PixelJunk Shooter Ultimate

Having already conquered genres as diverse as racing, tower defense and platforming, it was only a matter of time before Q-Games set their sights on shoot-em-ups. Despite dominating the 8- and 16-bit eras, the shooter genre has largely gone out of style in recent years. PixelJunk Shooter Ultimate may not revive the ailing genre, but it's a solid action game that borrows from the past while still managing to come up with fresh ideas.

Released for the first time ever on PlayStation 4 and PS Vita, this "Ultimate" edition packages both 2009's PixelJunk Shooter and its 2011 sequel into one seamless game. With more than 150 stages spread out over six different areas, PixelJunk Shooter Ultimate offers players a surprisingly deep experience full of unique power-ups and puzzling level designs.

You play a subterranean vehicle sent to rescue a bunch of unlucky scientists trapped underground. You fly around a large 2D environment breaking down walls, fighting enemies and grabbing each of the stranded scientists. Once you've collected them all, the exit door will open and it's off to the next stage to do it all over again.

Our subterranean vehicle is equipped with two types of rockets -- vanilla and homing. While it's tempting to hold down the fire button and send homing missiles everywhere, players will quickly discover this is a dangerous move. Not only will these rockets speed towards enemies, but they also have a bad habit of blowing up innocent scientists. What's more, launching too many missiles will overheat the ship, leading to certain death.

As our subterranean vehicle takes damage (or flies close to hot, hot magma), the ship's heat gauge increases. Overheating the ship will cause it to explode, usually resulting in a fiery death on the rocks below. Players can cool off by flying into water or simply spending a couple minutes away from the heat.

The fire and water dynamic is introduced early on, but it's far from the only mechanic you'll find in PixelJunk Shooter. As we dig deeper underground, our flying vehicle discovers a number of helpful suits that make solving puzzles a lot easier. One of the first suits has us spraying water and picking up blocks of ice. Similarly, the Magma Suit allows us to fly into hot areas and melt ice. 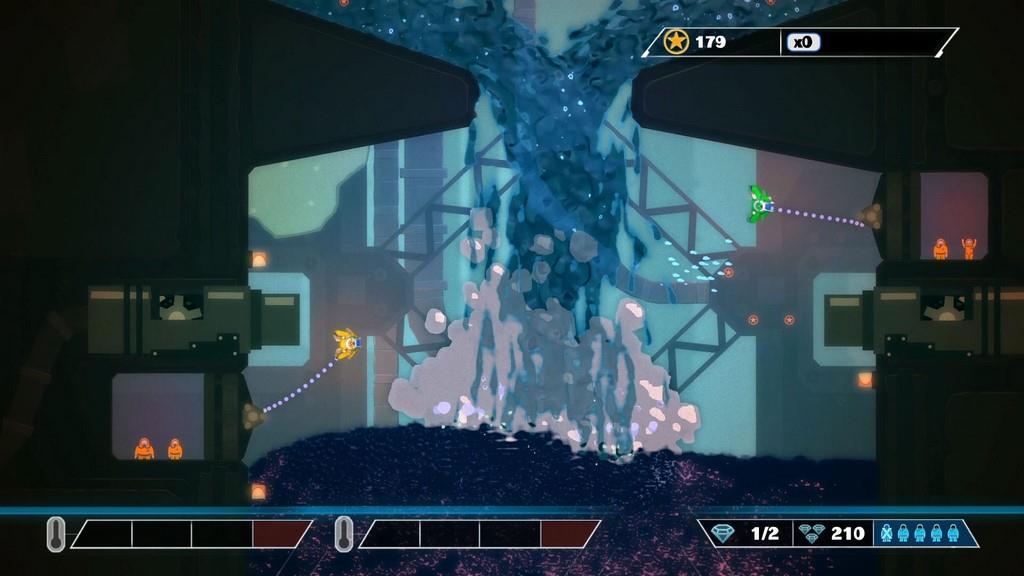 Then there's the Inverter Suit, which suddenly makes water deadly. The Anti-Magnet Suit repels and diverts streams of magnetic fluids, which is more useful than you might think. And then there's the Light Suit, which illuminates dark passages. Solving the hundreds of puzzles would be impossible without the help of these suits.

And then there's the Hungry Suit; by far the worst part of PixelJunk Shooter. This onerous suit strips away the ability to fly, forcing the player to slowly eat through walls of dirt. These stages reminded me of Dig Dug, and not in a good way. The Hungry Suit slows down the action and those levels tend to drag on far too long. And without a single checkpoint, I cursed the creator of the suit every time I was forced to start the stage over from scratch.

While they aren't separated in this "Ultimate" edition, it's easy to see where PixelJunk Shooter ends and the sequel starts. Suddenly we go from fighting through underground tunnels to getting swallowed by a giant creature. The final three areas are certainly the most interesting and feature the best puzzles. I was always curious what type of obstacle the game would throw at me next, and I was rarely disappointed. 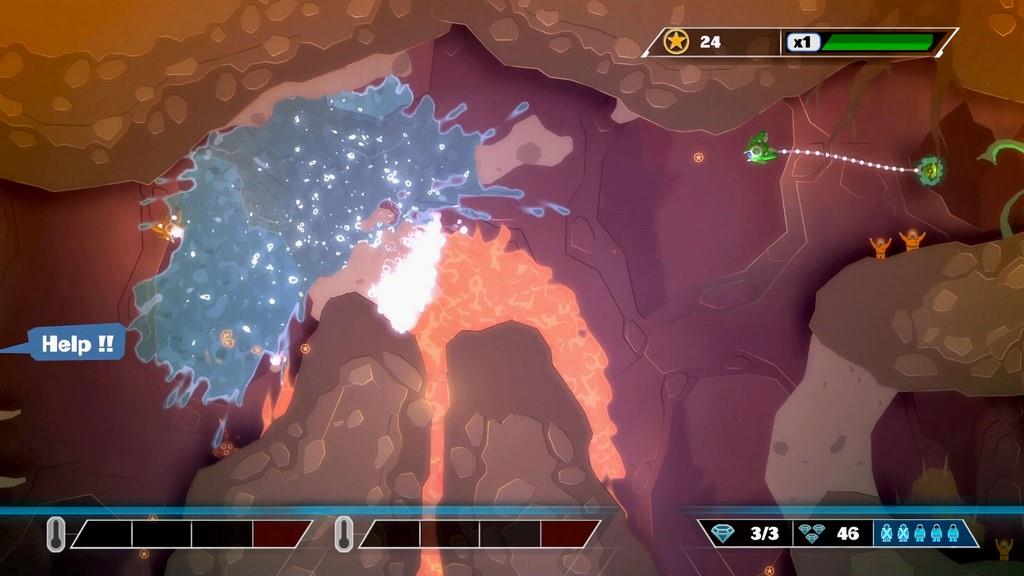 When not saving scientists (and mining hidden gems), you'll be fighting PixelJunk Shooters' many large bosses. Not unlike the old school shoot-em-ups that inspired this package, these bosses are massive in size and have multiple parts to destroy. Memorizing the enemy's patterns won't be enough, because often the attacks will change halfway through. Fans of the 8- and 16-bit shooters of yesteryear will get a kick out of some of these battles.

And don't let anybody tell you that PixelJunk Shooter Ultimate is a short game. There are hundreds of scientists to search out, including a few hidden characters that develop the story. Players looking to collect everything will be at it for days, while even casual players will get their money's worth. Throw in the two-player cooperative mode and the competitive battles and it's hard to say no to the $15 asking price.

Like many PSN titles, PixelJunk Shooter Ultimate is both cross-buy and cross-save between the PlayStation 4 and PS Vita. I found myself bouncing from system to system, constantly surprised by the visual differences on each platform. On the PS4, you can almost feel the roughness of the textures. The lighting dances off of even the simplest backgrounds. However, on the PS Vita, the gorgeous visuals have been replaced with solid colors and simple backgrounds. It still plays fine on Sony's handheld, but the visual difference is jarring. 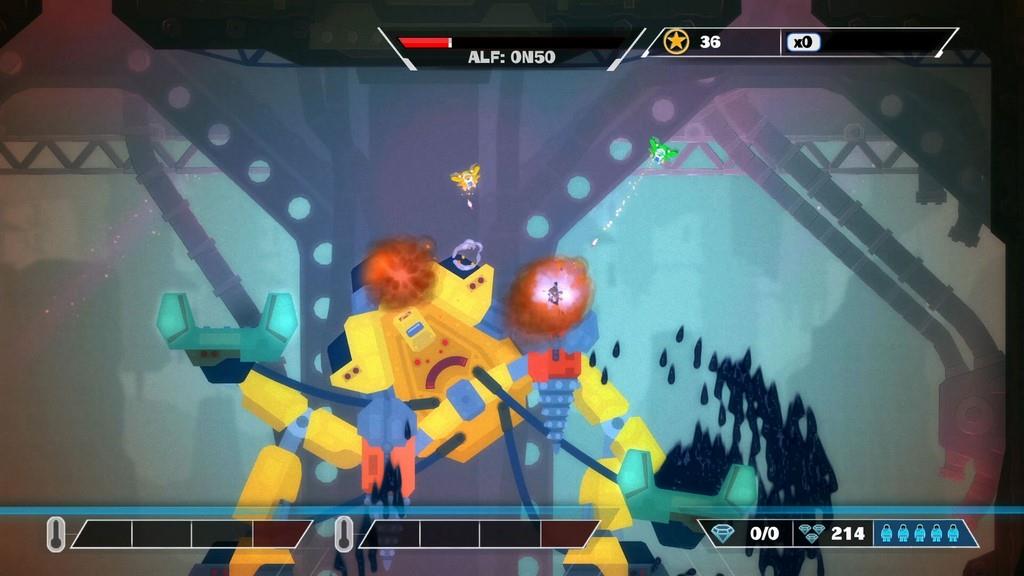 For a game with the word "Shooter" right in the title, I was letdown by the action in this newest PixelJunk release. The two types of missiles get the job done, but they aren't especially interesting. Sadly, neither are the enemies. The different suits help to liven things up, but even that is mostly used for puzzle solving and not traditional shoot-em-up action. If anything, this game should have been called PixelJunk Rescue.

With more than 150 stages and plenty of scientists to collect, PixelJunk Shooter Ultimate is a fun action game for the PlayStation 4 and PS Vita. I wish the shooting was a little deeper and I could have done without the Hungry Suit, but this is an easy game to recommend for both casual and hardcore fans of the genre.

PixelJunk Shooter Ultimate combines Q-Games' two previous shooters into one neat package. While not the deepest shooting experience, this PlayStation 4 (and PS Vita) release has a lot of content and some fun suits to fly around in. And with hundreds of scientists to rescue and hidden gems to collect, you'll be at this game for some time to come.