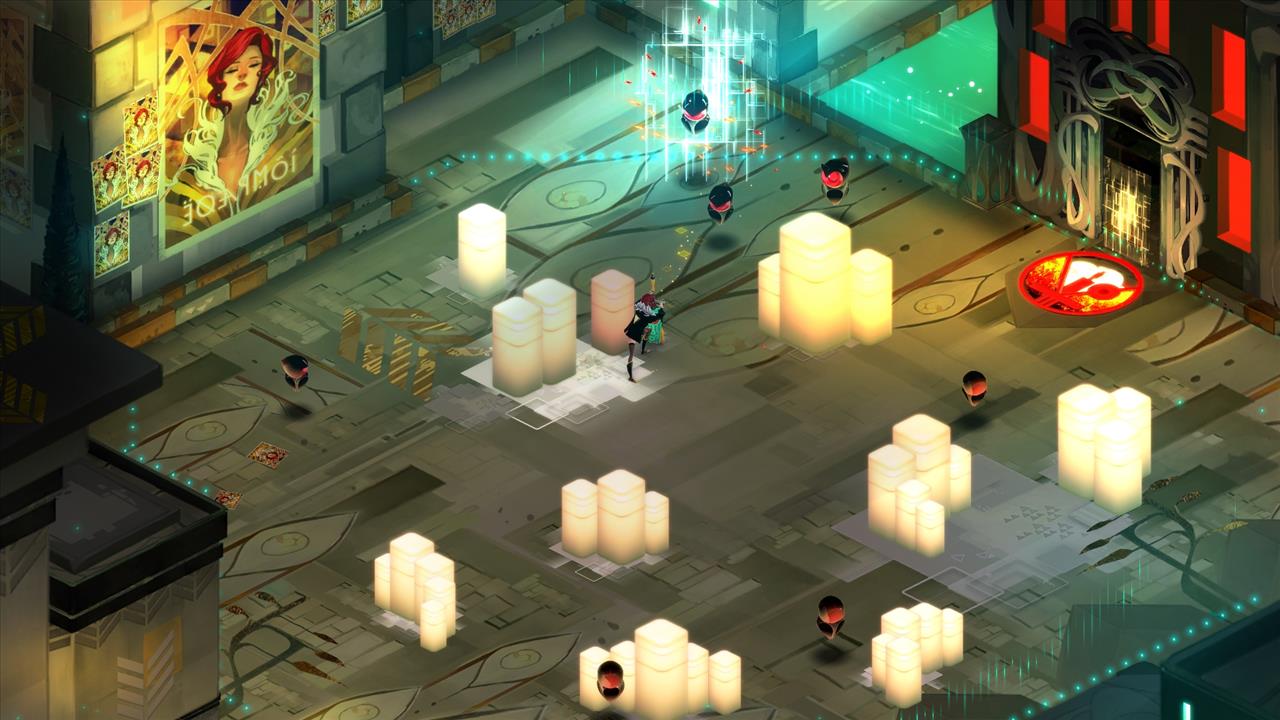 What happens when you take one man of action, one woman of words, and then rob them both of those identities? You get Transistor.

Transistor is a love story. A love story set in an apocalypse. An apocalypse amidst an electronic golden age. A golden age etched into the city streets and painted across the sky.

It's difficult not to think in artful terms when it comes to Transistor. Because simply talking about its gameplay mechanics doesn't even begin to set the stage for this story's complex interweavings. But, for the sake of setting up some of that mechanical staging equipment:

Transistor is a science fiction action role-playing game. The camera hangs out in a 3D isometric view, the same camera angle you see in games like Diablo or League of Legends, or even when using the tilt view on Google Earth. If Bastion also comes to mind, then you may already know that Transistor was made by Supergiant Games. They're the same handful of people that released Bastion to skyrocketing critical acclaim in 2011. Bastion has the art, the music, the story, the gameplay. It has everything going for it. Transistor, too, has all of these elements, but sidesteps plenty of opportunities where it could've simply copy-pasted Bastion's success. Instead, Transistor succeeds on its own. And (if you'll humor me for just a moment) if two in a row may be considered a pattern, then Supergiant Games' record makes them a video game studio composed solely of master craftsmen.

You are Red, Cloudbank city's brightest pop star. The cameras love her, the crowds adore her. As the story opens, there's an assassination attempt on her life. Red survives, but the sword—the Transistor, rather—takes her voice. The singer loses her song. The woman of words can no longer speak.

During the assassination attempt, there's a Mystery Man (not his actual name) that shoves Red aside and takes the hit for her. The Transistor inexplicably transports both Red and the Mystery Man across town. But he's now got the Transistor shoved deep into his chest cavity, and he's not getting up. We don't know his name, we can't see much of his face, but his consciousness—his voice—is now trapped in the Transistor. Nevertheless, the Transistor has effectively taken his life. The man of action can no longer move. But he can speak. And now Red is armed with a narrating weapon with as-yet-unknown powers.

The Camerata is behind all this. It'd be too simple to say that the Camerata is an evil-genius collective of Cloudbank city's most important minds and prominent personalities, but they're not. Or at least, they're not anymore. The Camerata isn't made up of thoroughbred criminals or even bullied fall guys. These aren't your usual bad apples. Each character profile you uncover about the Camerata reveals a misguided social or professional striving in its members. Perhaps one of them has a close encounter with pseudo-fame that still manages to fall through. Maybe another simply loves their job too much to ever let it go. Members of the Camerata aren't evil, they're simply pushed off balance just enough to leave them morally compromised. 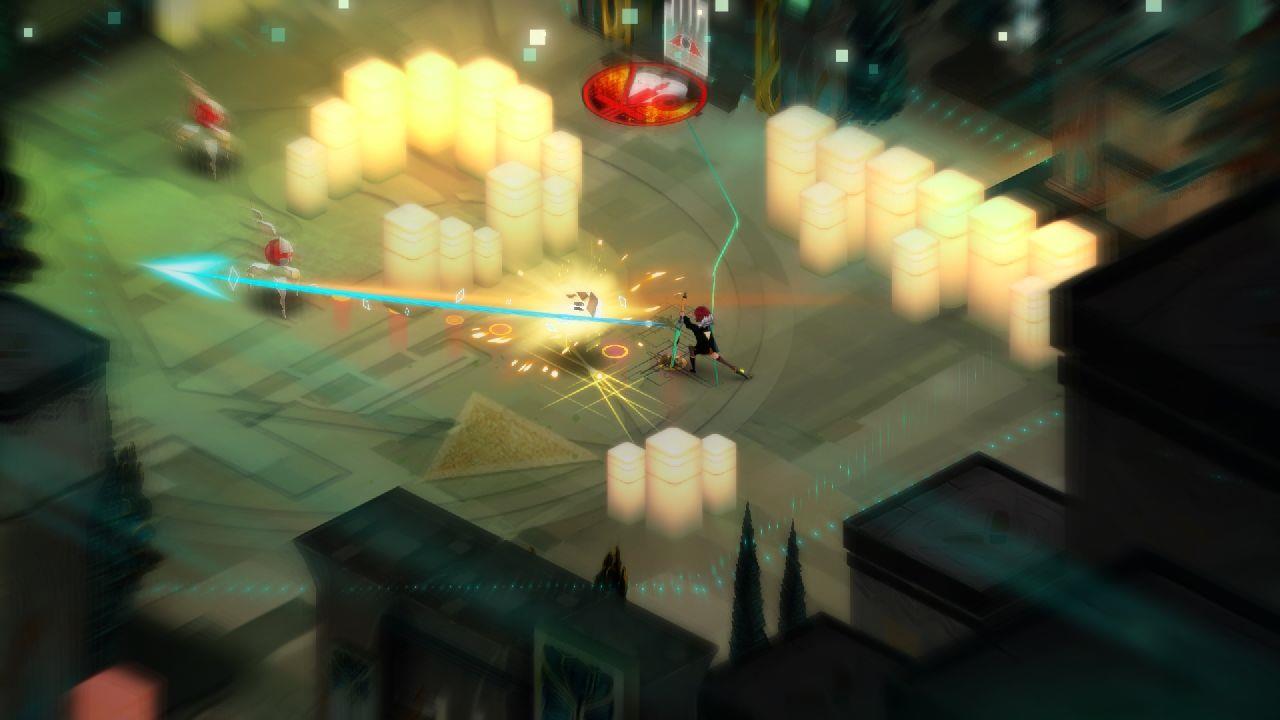 In Transistor, right and wrong is nothing more than a binary result, while good and evil are murky at best. Sometimes, good people do bad things. Sometimes, bad people do good things. Or they at least try to do things for the right reasons, regardless of the result.

Knowing that, however, doesn't answer everything. What drives the Camerata? Can their robotic army be stopped? What is their Transistor capable of? But, more importantly, where does Red draw the line?

Not a lot of confusion, but still a lot of questions.

Cloudbank city, where our story takes place, is a city where everyone's voice matters. Opinions are important. They're collected, tallied, and regurgitated into clearcut poll results. Citizens tune into citywide news forums and ponder the latest propositions. Citizens know instantly if they're a part of the popular majority, or relegated to the minority opinion. 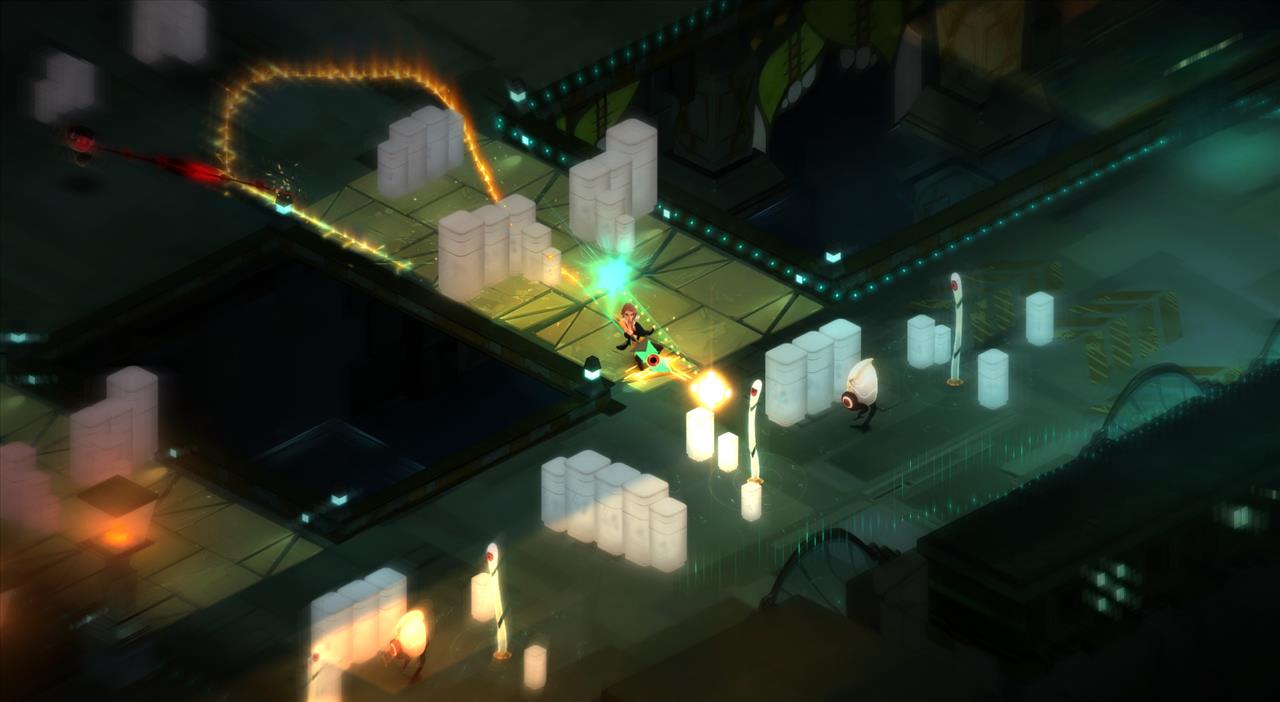 Everything in Transistor lives and breathes in an electronic dreamstate—or a Peter Molyneux fever dream, if nothing else. (Molyneux is the famed overreaching visionary behind video games like Populous, Black & White, and Fable). Embedded in this electronic dreamstate, Cloudbank city looks like the Great Gatsby is facing off against Tron for build rights. The buildings themselves look like they're rising from an art deco motherboard. Your weapon is a microprocessor with upgrades populated by trace elements of missing persons. Red can't speak, but she hums lovingly to the narrator, backed by electronic post-rock instrumentals. See? Molyneux fever dream.

While the Camerata is the bad-guy conglomerate, the robotic force known as the Process is what's destroying the city. Wiping it clean, rather. Like a hard drive. The people start evacuating. No one knows how much time the city has left, but it doesn't seem like there's much.

The Process populates the brunt of the battlescenes. While the Process looks like WALL-E and EVE had some mean-spirited offspring, the Process's units are often named after dangerous-sounding high school archetypes: Pretty Ladies, Creeps, Cheerleaders, Jerks. It's like these enemy robots were humanized, and then dehumanized again by being labeled with social stereotypes.

The Transistor is armed with weaponized traits that, again, sound like humanized computer functions. The Transistor doesn't just attack with sword strikes and fireballs, but with moves that are "transformative" or "auspicious." Yes, the Transistor's different functions are ultimately bred to kill enemies, but it does so with personalities and persuasions as much as hacking and slashing. Putting together these different functions into puzzle-piece combos makes for varied, combative results. In a strange sense, since these functions are also made up of trace elements from different people, mixing and matching these functions sometimes creates odd bedfellows. 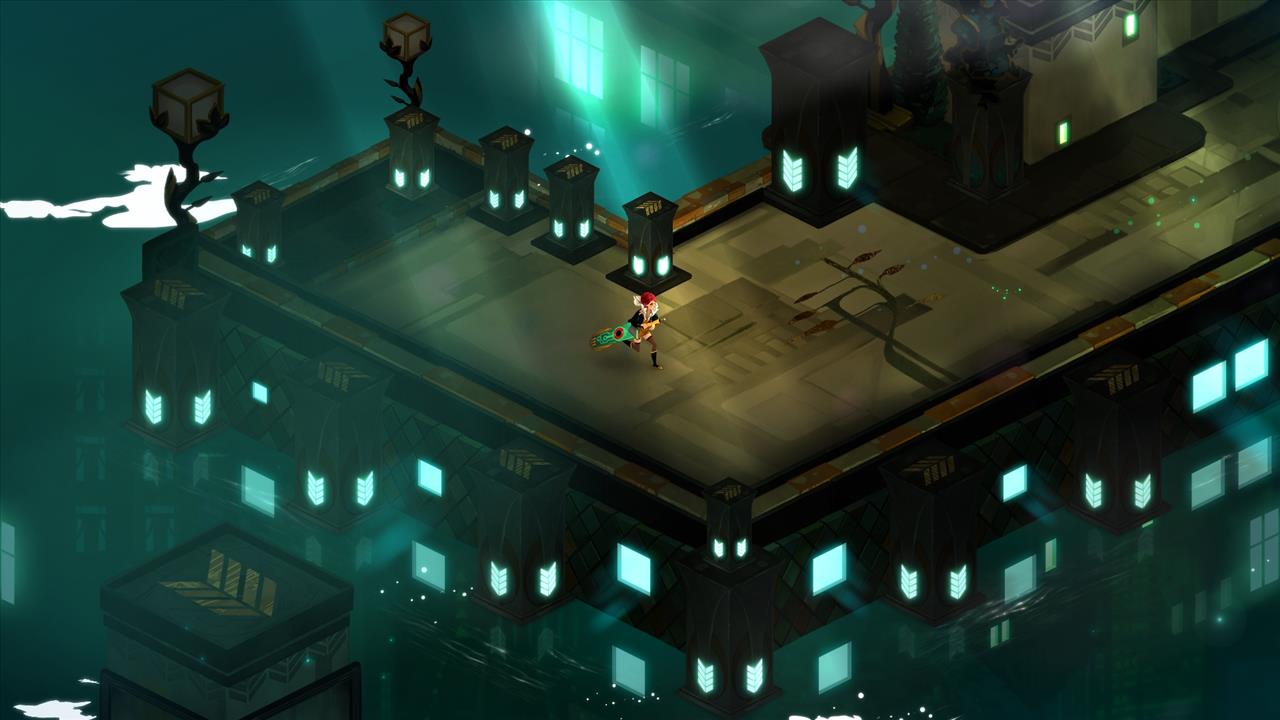 In order to get to the Camerata, Red must fight the Process that's spreading like a dense fog throughout the city of Cloudbank. It's not looking good for the good guys. On a technical level, I have minor irks with, perhaps, the HUD placement on the screen, not to mention the camera that won't budge even to locate an enemy A.I. that's off in left field, somehow forgetting they're in the middle of a fight. And while the first meeting with any new enemy type required patience, I learned how to handle subsequent encounters deftly and with increasing confidence and authority.

The soundtrack is an indispensable element of Transistor's storytelling. You can't play this game with the sound off. Actually, were you to try, you'd be missing half the game. Red's voice is indeed stolen, but there are occasional flashbacks (in a sense) when Red sings, and you hear her voice, and it's wonderful. It's easy to see why she's so popular in Cloudbank.

The Mystery Man is the narrator, but he's not an omniscient narrator by any means. He's relying on gut instinct and rote memorization of the city's layout as much as Red is. The Transistor's voice actor, who happens to be the narrator from Bastion as well, puts out a natural, conversational, personable performance. Not bad for playing an electronic component. And while it seem like they would be, the interactions between Red and the Mystery Man in the Transistor are hardly one sided. Their "conversations," in fact, make for the best male and female duo performance I've seen in a video game since 2010's Enslaved: Odyssey to the West.

Together, as Red and the narrator run through the city—a city where every voice matters, yet every voice is being silenced—this duo sets out to restore the only two voices that matter: each others.

Transistor is one of my favorite games of the past year, easy. Without being weird and unrecognizable as a video game, Transistor turns many video game tropes on their heads—subtley. It also features an excellently written and likable narrator, a fully realized and meaningfully motivated female protagonist, a twist on the tired old tech tree of yore, a soundtrack that's integral to the storytelling fabric of the game, and a complex enemy composed of cowards, contemporaries, and anything-but-bloodthirsty rivals. There's not a note, pixel, or line of dialog out of place.