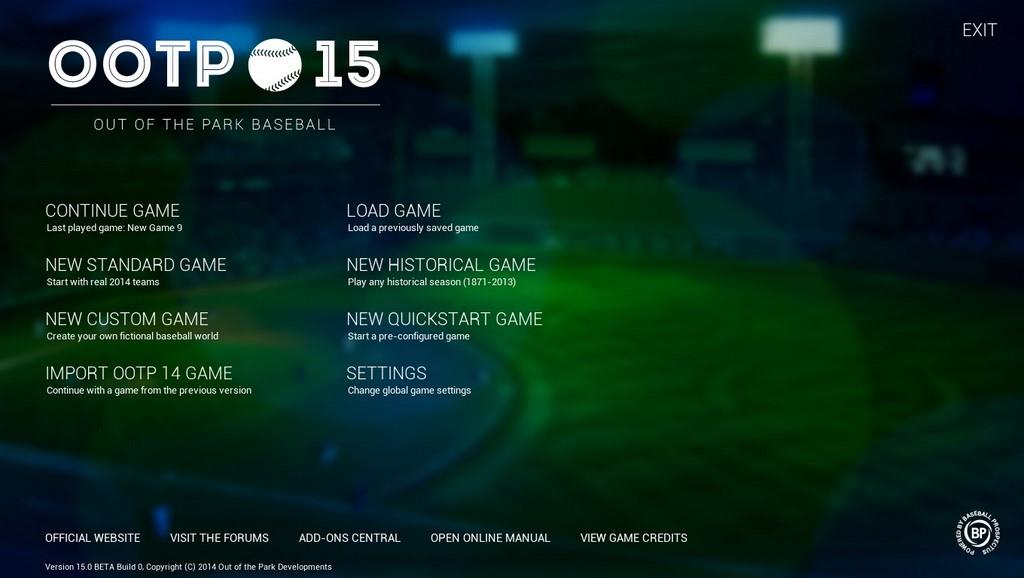 Out of the Park Baseball 15

It’s that time of year again.  Time to head out to your local ball park, eat some hot dogs and popcorn, and cheer on your home team as they race for the pennant and look to become World Series champs…or if you live in Ohio you just hope your team doesn’t choke after the All-Star break again.  Then again if you’re hometown team is one of those that just can’t catch a break, maybe you think you can do better if you were the manager.  For the past several years the Out of the Park games have set the bar for baseball simulation games, so let’s see if Out of the Park ’15 continues that trend.

Overview:
As with past games in the series, if you’re looking for a full-fledged baseball game similar to MLB: The Show you won’t find that here.  Out of the Park ’15 is a baseball management simulator where you can manage and simulate just about every aspect of the game, from deciding what kind of pitch to make in a game to making trades during the pre-season to even creating your own league.  Aside from physically controlling the game like in traditional baseball games, you basically control everything that happens.

When the game begins you’re give several options to choose from such as starting a historical game from the past to playing a quick game to starting a full season.  Starting a season will allow you to either choose what team you’d like to manage or offer to become a free agent and see which teams would like your managerial services.  Once you’re hired onto a team it’s time to get down to business of setting your rosters (unless you let the computer do it for you) and preparing your team for the season ahead.  You might get trade offers before the season begins, making you analyze your players to see if the trade is worth it.  Once everything is settled it’s time to begin the season.  The team owner will give you a forecast of sorts as to where he thinks how well you should do for the season.  I typically have managed either the Cincinnati Reds or the Columbus Clippers, so the forecast for me has been either getting above .500 for the season or making the playoffs.  I’m sure that other teams (those that have had more recent success) will have better forecasts…or at least worded differently.

As with any sports game, one of the key things players look for is what’s changed since the prior year’s version of the game.  With Out of the Park ’15 some of the changes are small touches like a new ratings system and improvements to the display, no longer defaulting to a 4:3 ratio and allowing 16:9 or 16:10.  There are also seven new international leagues you can choose from with countries like Taiwan, Japan, and Italy, adding thousands of players to the game.  However, the biggest improvement comes in the form of 3D ballpark support as well as in-game ball flight.  How does all of this affect the game?  Let’s take a closer look.

What I Liked:
If you’ve read any of my past reviews on the Out of the Park series, then you’ll recall that while I can’t manage a baseball team to save my life, I did still enjoy the games.  As with those past reviews, Out of the Park ’15 has once again set the standard for baseball management simulations and has possibly begun to raise that bar even higher.  If you’ve played prior versions then most of it should seem familiar to you.  You can manage your favorite team whether it’s from the National League, American League, Minor League, or even those from overseas.

As with last year you have several options right from the starting screen.  You can choose to begin a new season, continue a game from a previous year, play a quick start game with pre-set options, or play a historical game dating all the way back to 1871.  Want to start your own league?  You can do that and use leagues and teams from today’s rosters, from those back in the day, or even create your own fictional league with your own teams and rosters that just pop into your head.  You can create a team for your own hometown and see how far they can go.

When it comes to managing your teams, anything goes.  Want to trade someone who’s not doing so well for someone else who might be a better fit for your team?  Go for it.  Want to alter your rotation or lineup?  Have fun.  Are you like me and can’t make a line-up to save your life?  Have the AI do it for you by turning on GM Only mode.  While in a game you can take things pitch by pitch while on defense and choose how to swing while at bat.  You can choose whether to have a runner steal a base or have a batter just take a pitch and hope for the best.  Aside from physically controlling a player, you literally make every decision…or you can even auto-skip through a game or even through the entire season.

While in game you even have a few options to check out.  You can view the game as normal or view it as a webcast.  If you’re curious about how other games are going you can check out some other scores in progress.  Before each game you can turn on a real-time simulation option which, from what I can tell, makes it so other games are actually in progress the same time you’re playing yours.  I didn’t keep this on for long though as I was mostly focused on my game anyway and wasn’t worried about how other games were going.

What Bothered Me:
While there’s not much more to talk about without writing a novel on the game, there were actually a couple minor things that bothered me, and the first one surprisingly has to do with the 3D.  When I first installed the game the only thing the 3D option would let me do is move the ballparks around and rotate them to get a nice 3D view of the park.  After installing an update though I could no longer move the ballpark around, but you can now see the ball being pitched and hit to the field, but that seems to be the extent to the 3D…for now.  According to the forums, future updates will improve on the 3D effects.  It would be nice to see the runners run the bases, and maybe even see every play played out in front of you, so instead of just reading “so and so hits the ball, so and so fields it, the throw to first is in time”, you can actually see it happen. 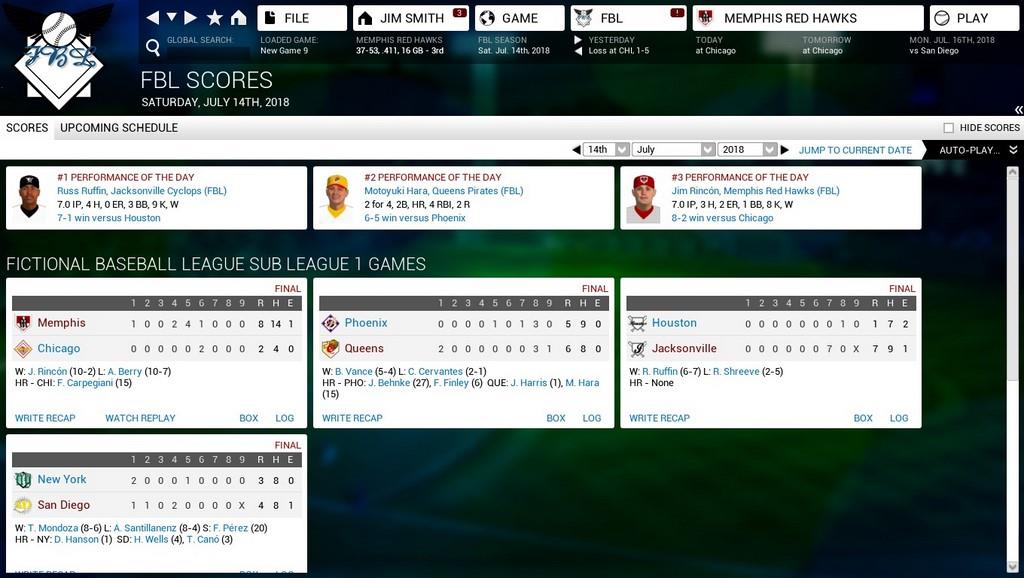 The other minor issue…actually isn’t the fault of the designers, but Major League Baseball themselves, and that has also come in the recent update.  If you were to download the game now (or rather as of around May 23rd), you’ll no longer see the real team logos and nicknames for all MLB and Minor League teams.  This is because the developers were contacted by MLB and asked not to use their team names or logos, though I’ve read that you can actually edit the logo pics in the game’s directory back to the original logos if you wish to go through with that.  Now while this is a minor nitpick, there is no way I can blame the developers for this, but I do question why and why now?  I mean this is the fourth Out of the Park game I’ve reviewed (and at least the sixth overall on Gaming Nexus) and I don’t recall once there being an issue using MLB team names and logos.

Final Thoughts
Overall, Out of the Park ’15 has once again not only raised the bar for baseball management simulators, but also set the standard for future installments.  The fact that the team nicknames and logos were taken out don’t hurt the product per-se, but I still question “why now?”.  The only other minor issue is that there’s not much to the 3D effects now, but the developers have said that future patches will work on that, so I’m interested to see how that’ll improve the experience.  With that said, if you’re looking for a good baseball management simulator, look no further than Out of the Park ’15.  It can basically do it all and then some…unless you want to physically control the players, in which case MLB The Show is calling your name.

Whether you want to just jump right into a game or season, or want to create a league from scratch, Out of the Park ’15 has the ability to do it and once again raises the bar for baseball management simulators.  While the 3D effects to need some work, there’s no doubt that this is an awesome simulator for those who want to customize any and every aspect of the game.